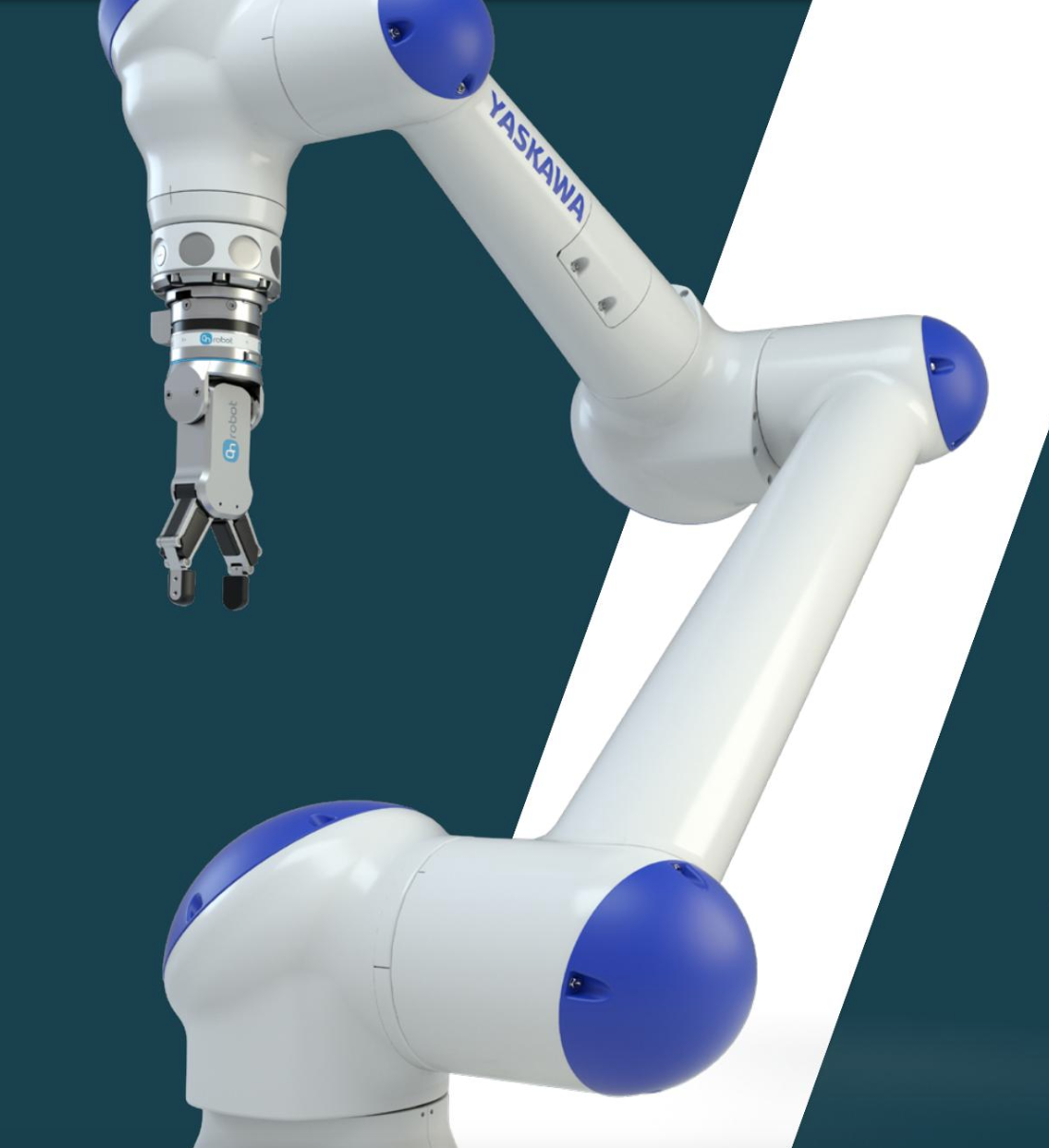 In the same vein as “you’re only as fast as your slowest team member,” a robot can only work as efficiently as its end-of-arm tooling (EOAT) allows. The International Federation of Robotics estimates that more than 3 million industrial robots are at work around the world, and they tackle so many types of tasks and materials that EOAT has evolved to meet those needs.

Yaskawa has its share of robots out in the field, including those working side-by-side with humans. One of its latest is the Smart Series, a new line of collaborative robots (cobots) that is operating in factories throughout the world, helping customers automate their processes more easily. Not only is the right EOAT required to meet production goals with cobots like the Smart Series line, but safety measures through advanced technology also need to be put in place to keep the workplace safe.

Michael Castor, product manager for material handling at Yaskawa, says his company is not alone in the belief that cobots need to deliver on the benefits traditional robotics and in an easy-to-use way for flexible manufacturing. Therefore, Yaskawa has created agreements with a growing number of EOAT manufacturers to achieve goals such as “efficiency, flexibility and future proofing.”

“We rely on technology partners to help us produce EOAT,” Castor says. “We’re working together to make products that are as plug-and-play as possible to get manufacturers operational as quickly as possible.”

While the application as a whole is what determines if a process can be called collaborative, the gripper or EOAT plays the biggest role next to the robot. When it comes to robots, including the Smart Series line of cobots, there are three main gripper types: mechanical, vacuum and hybrid.

Manufacturers often use mechanical grippers, which are electrically actuated and form a grip similar to a human hand, for smaller objects. Among the producers of mechanical grippers that work with Smart Series cobots is OnRobot, which produces RG2 and RG6 grippers that feature a non-pinch point design. The fingertips are customizable, so if the user is dealing with various part shapes, the grippers are able to adapt. Schunk is another producer of adaptable grippers with no pinch points.

“The fingers are interchangeable,” Castor says of Schunk’s Co-act EGP-C grippers, which can be used on the Smart Series, “so you can use longer or shorter fingers. You can even 3-D print your own fingers if you need to.”

Vacuum grippers are another popular gripper type, often used for boxes, sheets and parts that have flat, non-porous faces and can be gripped from the top.

Schmalz, a company known for its vacuum grippers, utilizes an integrated vacuum pump in the Smart Series-compatible ECBPi vacuum grippers that can be dialed up for heavy loads or dialed down for lighter materials. The suction cups are interchangeable for working with different materials.

Schmalz’s FXCB grippers are Smart Series-compatible vacuum grippers that utilize collaborative pad gripper technology. According to Castor, this is good for palletizing, which often involves moving boxes for packaging from one place to another. And because the vacuum cups don’t have sharp edges, there is no worry of damaging the packaging.

Hybrid grippers, the third type of gripper system used most often with cobots, use pneumatics to grab objects, which are often soft and delicate.

“If something has some squish to it,” Castor says, “such as food packaging, and you need to be careful of how much force you use on it, hybrid grippers might be a good solution.”

Soft Robotics makes unique pneumatically actuated grippers called the mGrip P4Y that use flexible fingers to grab onto delicate items without damage and can be used with the Smart Series. Attendees at 2019 Fabtech might have noticed an mGrip handing out stress balls. It’s built to expand or contract to grip different sized materials.

“There’s really nothing sharp on the end of it,” Castor says. “It’s just soft, silicone-like fingers, so you’re not going to get hurt by these grippers. It’s a very good solution for collaborative robots.”

When a manufacturer uses a single conveyor and all parts handled by the robot are easily defined and simple to pick up, the grippers can do their job without any issues. This is referred to as a “structured” scenario. But things aren’t always so structured – some production lines include a good measure of randomness and in more of a 3-D situation where depth is a consideration it is more difficult for the grippers to maintain accuracy. This is a situation that requires “vision,” which basically includes sensors that assist the grippers in making more sense of the randomness.

“Maybe your parts are coming in on a table or some kind of bin or a tray,” Castor says. “There might not be a lot of structure to it, so there might be some variability. Using a vision system, the robot is able to tell where that part is, where to pick it up and how to get to the next point.”

Castor says operators often think of using vision technology as something that is going to be complex and difficult to implement, but that’s not the case. He set up a vision system (In-Site 8000 self-contained vision system) from Cognex that “works nicely with our robots, is tried and true,” which is relatively simple to install and use.

Because cobots vary in how closely they work with their human counterparts, different approaches to safety are required. Two specific safety areas Castor mentions revolve around products used for speed and separation monitoring and for stop-state monitoring. Yaskawa also works with its technology partners for these R&D initiatives. 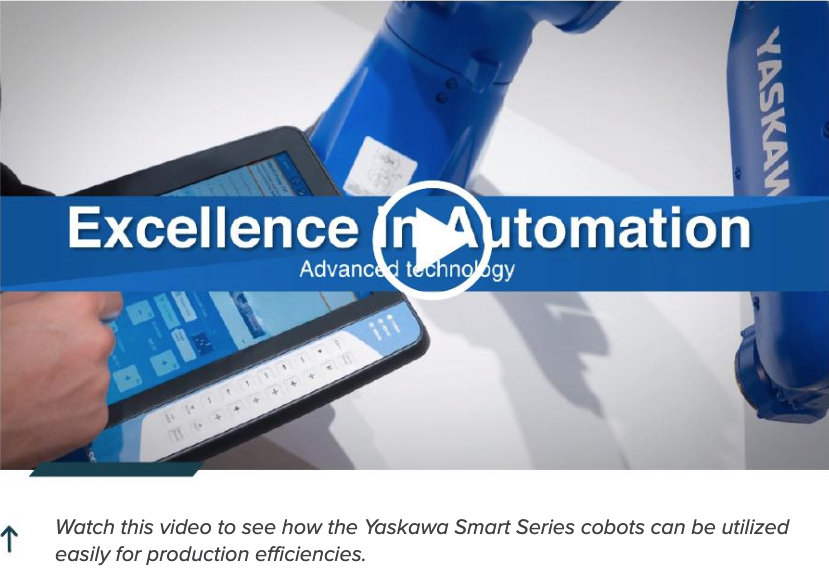 In some cases, the cobot only needs a non-obstruction zone of about 15 cm to keep the operator (often just their hand or finger) working safely alongside it. But other setups require a multi-step approach. For example, a large industrial cobot might require a light curtain that slows the action of the robot (speed and separation monitoring) when it is triggered by a human entering a potentially unsafe zone, and then another sensor that completely stops the robot’s action (stop-state monitoring) when an operator comes even closer.

Pilz, Castor notes, is a safety product company that developed an elaborate light curtain in its PSENopt option, which is used in protection zones from 15 cm to 180 cm. This stop-state monitoring system can detect objects as small as a finger entering a work zone and halt the action of the robot.

Sick is another safety company that produces speed and separation monitoring safety products, such as the sBot Speed laser scanner, which can be used to monitor multiple zones. This enables one sensor to be used to slow and stop the robot, reducing cost and integration time.

Once the operator leaves the area, the robot picks up where it left off.

“It doesn’t have to be reset,” he says. “Once anyone is clear of the zone, it just resumes operation.”