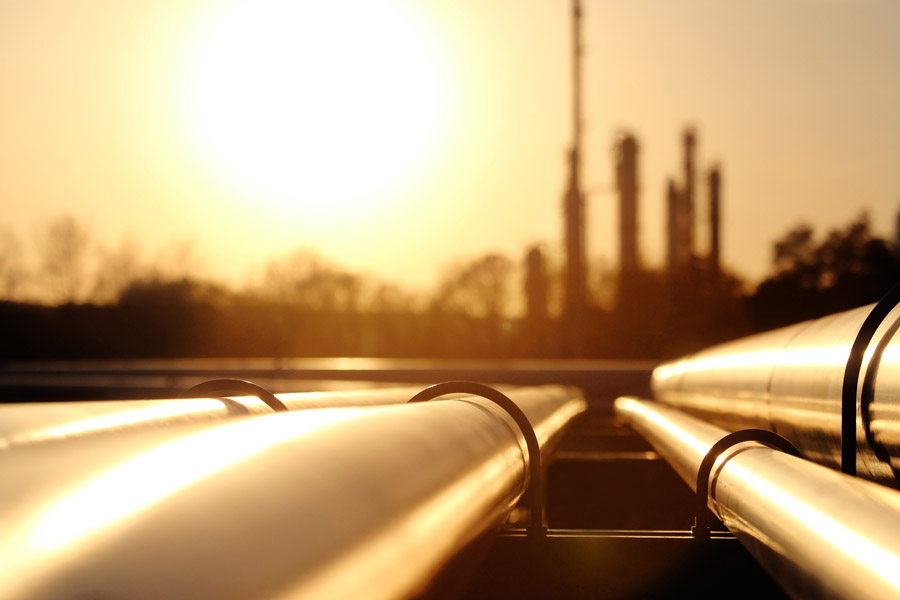 For the oil and gas industry, 2018 was a good year. Worldwide, the use of crude oil hit 100 million barrels a day for the first time. Despite an uptick in daily usage, however, experts predict volatility throughout the remainder of 2019, some of which can be attributed to recent tariffs, the threats of more and the brewing unrest in the Middle East.

In the face of an uncertain future, welding equipment manufacturers continue to innovate. Daily usage of crude oil still hovers around 93 million barrels, and because welding applications are staples in the industry, those manufacturers’ focus on equipment advancements cannot falter.

Lessons learned in the downturn, which included tightening up operational efficiency and cost containment, remain fresh in the minds of executives in the industry.

“Now,” the survey reads, “opportunities include the whole suite of digital technologies and could touch all aspects of the supply chain. Tomorrow’s leading companies should adapt today.”

Prepping for the battle

The oil and gas industry saw a 40 percent cut in global capital expenditures during the downturn between 2014 and 2016. Billions of dollars’ worth of major projects were cancelled or delayed during this time and thousands of oil and gas industry workers, worldwide, lost their jobs. Tough times can lead to learning opportunities, and it seems the lessons learned included focusing on operational efficiencies.

However, the positive part of the downturn for Miller was that despite the drop in oil prices, many oil and gas companies stayed busy, and Miller developed new technologies during that time to improve productivity and safety.

“We spent a lot of time prepping the battlefield and letting customers know what we’d developed and how it would help them with productivity in the future,” Valentini says. 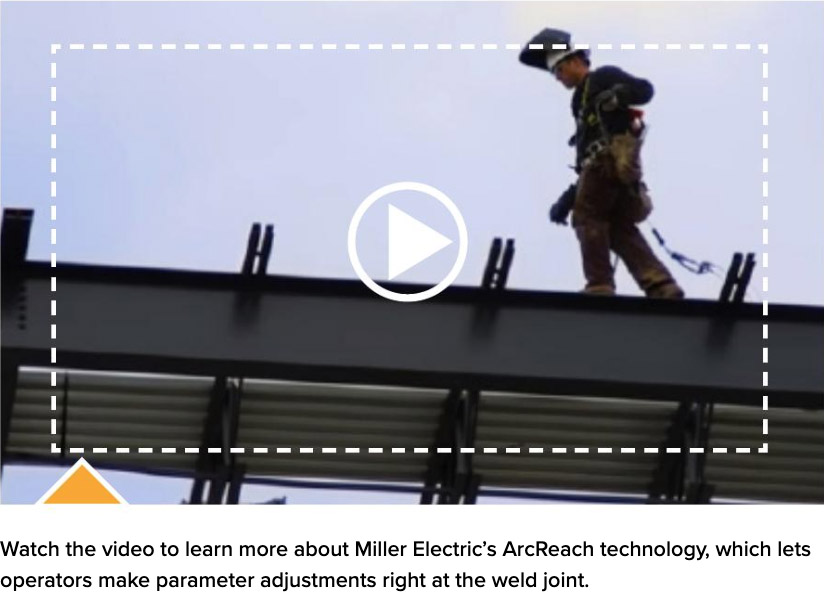 Specifically, Miller introduced ArcReach technology, which is included in many inverter-based plug-in and engine-driven welders and allows welders to make adjustments to parameters and processes without having to walk away from the weld. This is possible with a remote or wire feeder that is connected to the machine via cables that run to where the welder is working. Should an adjustment need to be made, the welder simply makes it on the remote or wire feeder.

“There is less setup time,” Valentini says, “better weld quality, more arc time and reduced risk, which is a huge safety factor; every time a welder has to move away from the weld, they’re walking through different safety hazards.”

Similarly, Abicor Binzel is doing its part to help the oil and gas industry “stay lean,” says Bill Hall, key account manager for the company. One of the most popular products Abicor provides the oil and gas industry is its Spool Welding Robot (SWR), first introduced at Fabtech in 2017. As a first-of-its-kind pipe and pressure vessel welding solution, it is designed for maximum performance and arc-time efficiency and has a small footprint compared to similar products.

“The SWR ties in directly with the oil and gas market – building the pipelines, whether it’s for gas or refineries – it covers about everything,” Hall says.

The SWR addresses operational efficiency concerns as it is designed to reduce costs for pipe fabrication; one or two welders can complete a job that would typically require two dozen without the SWR. This is possible, in part, due to the SWR’s semi-autonomous laser seam tracking and automatic root-to-cap welding, which requires no arc restart, plus it has a 100-percent duty cycle robotic welding gun.

The SWR is also designed with advanced features, such as recording performance data, including video, every 50 milliseconds, giving users statistical reporting abilities. Novarc Technologies, a heavyweight in robotic welding and collaborative welding solutions, developed the SWR and collaborated with Abicor to provide sales and service support, bringing, among other technologies, its NovEye camera and NovData data collection system, which give insights into weld performance.

The oil and gas industry is highly invested in welding applications, but just as in other industries that require highly skilled welders, the aging workforce is leaving their welding guns for retirement and fewer and fewer professional welders are willing or able to take their place. The situation lends itself to innovation on the part of welding equipment manufacturers like Abicor Binzel and Miller Electric.

A completely automated welding application isn’t practical for the oil and gas industry, as there are often too many variables involved that don’t lend themselves to a fully automated system. This means there is still a need for quality welders. For example, fit-up is crucial in welding pipes, as each component has to be lined up precisely. Still, variables exist, which can be detected by a welder who knows what adjustments need to be made, especially on the all-important root pass.

However, Brandon Kunze, also a key accounts manager at Abicor, says the company is working on automation with technologies including motorized slides and seam tracking sensors, which provide more ease of operation, especially for newer welders.

“That goes back to the lack of skilled welders in the market,” Kunze says. “We can semi-automate some of these processes to remove the need to have high-skilled people running it. You set your procedure and follow it, and use seam tracking and other technologies that offer different levels of efficiency into the operation.”

Miller’s Valentini says the shortage of welders in addition to the skills gap presents a challenge that can be mitigated through improved technology.

“In the oil and gas industry,” he says, “especially with pipelines, a lot of guys are getting older and retiring and the new people coming in don’t have the skills and expertise of the guys they’re replacing. The ArcReach technology is more advanced, so it’s more forgiving to a new welder or someone not as skilled as previous welders.”

One of the biggest changes the oil and gas industry is experiencing is a switch from the United States being a big importer to being a bigger exporter. Oil remains king in Texas where in an effort to fill demand for jobs, vocational training is getting more attention.

Hall says Abicor has teams working closely with their local American Welding Society sections as well as with vocational schools and colleges, often providing products for their labs for training and education. 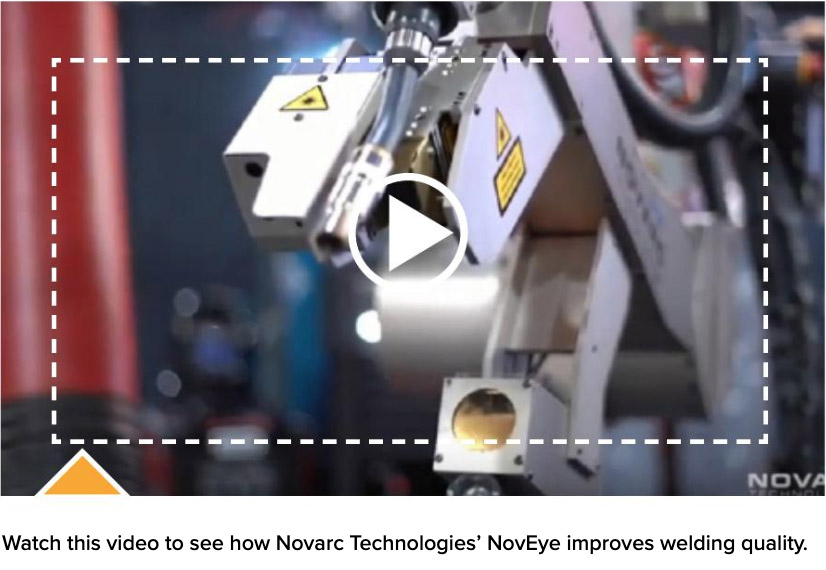 “Basically,” he says, “we’re happy to provide whatever we can to support the learning side.”

Matt Sciannella, director of marketing at Abicor, says his company has offered free or deeply discounted products to several trade schools to get professional-level equipment in students’ hands.

“We want to be sure they are being exposed to high-quality pieces of equipment as soon as possible so they recognize the value it brings to them in terms of making their job easier to do and more comfortable,” he says.

The South Coast Welding Academy in Houston and the Lake Area Technical Institute in Watertown, S.D., are two such examples where Abicor has forged close relationships to work toward mutual goals.

Miller is also a proponent of training and has an entire education group that works to address bringing more professionals into the mix.

“We offer a free curriculum called Open Book that any educational institute can use to develop their curriculum,” Valentini says. “We’re also integrating with trade schools and high schools to make sure they’re aware of newer technologies because you can’t go to school and weld on a machine that is 40 years old and expect that to be what you weld on in the real world.”

Miller’s ITW Technology Center in Houston is also a great opportunity for touring school groups to learn about the welding profession. Furthermore, Miller works with the many training programs, including the Tulsa Welding School, which offers courses specific to the oil and gas industry.

“There has to be a change of culture in the United States to tell people it’s okay to go to trade school,” Valentini says. “You can make a good living in the trades if you want to work hard.”

Hall says the oil and gas industry as a whole is doing well with more pipelines planned and new plants being built.

“For large-scale projects, it’s hard to say what the level of capital improvements is,” Hall says. “A lot of people are getting poised and in position to make capital purchases as they’re waiting on those elusive large orders to come in. They seem to be right around the corner. Everywhere I go, the market is really busy.”