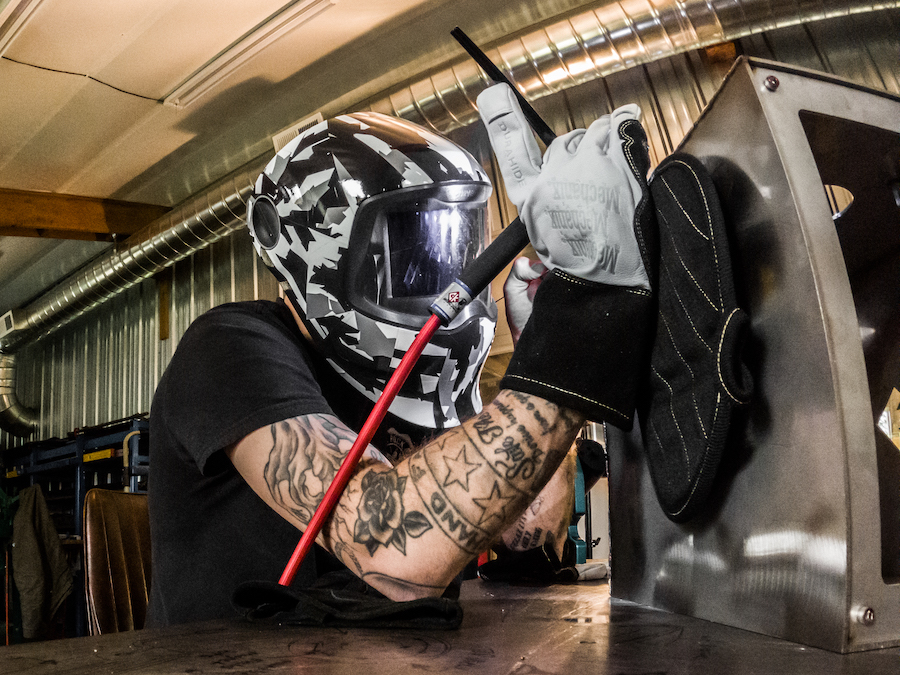 The welding skills gap has been a tough nut to crack. As Baby Boomers have been hanging up their welding guns in favor of retirement, organizations like the American

Welding Society (AWS) have been chipping away at the void left behind through a myriad of campaigns aimed at the next generation. While these efforts have made significant inroads, AWS reports that that there will still be a need for 300,000 welding professionals in the United States by 2024.

For AWS, one of the most successful strategies to date has been leveraging social media, specifically, the influencers that are flexing their welding skills online. A quick search for welding on Instagram results in young, tattooed welding celebrities that are chronicling their work through slick photos and flashy videos that boast some serious production value. And the number of likes they get don’t lie; these influencers are swiftly removing the stigma that welding is a dirty job that no one wants to do.

With 17,000 followers on Instagram, Nate Bowman is one of the influencers that’s making a difference. By day, he’s the director of welding optimization and education at Central Welding Supply Co. Inc. based in North Lakewood, Wash. In that role, he’s solving almost every welding problem imaginable – from weld failures to procedure development issues and everything in between. He also oversees continuing education for Central’s employees and customers while working with local trade and high schools, helping them create curriculums that speak to the needs of today’s welding students.

When Bowman is off the job, he’s known online as the Weld Scientist, a welding pro that knows the exact formula for laying down a gorgeous bead no matter the material or the process. But that’s just the half of it. He also serves as a mentor and go-to guy to his Instagram followers, dedicating his free time to sharing everything he’s ever learned throughout his career.

“I have people asking me questions all the time,” he says. “Someone will ask me about a weld setting, and I’m like, ‘cut, paste, here you go, share it with all of your friends.’ Nine times out of 10, I’ll get a message back, saying, ‘these settings are awesome; they work every time.’ Some people hold that info close to the vest, but I think that’s the wrong philosophy to have. Instead, I believe that the more that experienced welders are willing to share their knowledge, the bigger and stronger the welding community becomes.”

Bowman is certified – in the sense that he’s put in his time as a welder and has the chops to prove it. His dad owned a construction company, so he was exposed to the trades at a young age. And then, shows like Monster Garage hit the airwaves, which further proved to him that his interest in welding could be more than a hobby. Even though his first jobs in welding left something to be desired, he kept pressing forward.

“When I was coming up in the industry, I didn’t have anyone to ask for help,” Bowman explains. “I was very passionate about welding, so I was trying to glean information from these older guys at work, but a lot of them didn’t take me seriously. They didn’t get why I was taking photos of my welds, and in hindsight, I wish I’d taken more.”

A deep interest in photography helped Bowman gain his status – and his following – on social media. A quick glance at his Instagram account proves that his photography chops are just as impressive as his welding chops. But, in terms of a welding career, Bowman learned early on that it takes more than just chops to make it.

A turning point came when he was “officially” certified as a welder and not just in the hard-knocks sense. With an AWS certification under his belt, he says he was finally taken seriously. Today, he has three – a CWS, CWI and CWE, the AWS’s certified welding supervisor, inspector and educator certifications, respectively.

Assuming that other young welders are experiencing the same frustrations Bowman encountered early in his career, he was more than willing to partner with AWS to help the organization launch its Certified campaign with a goal to get more welders interested in certification. With his unique platform on Instagram, he set out to produce a series of videos that would catch folks’ attention, but not sugarcoat the realities of earning AWS certification.

From personal experience, he knows the value of an AWS certification, but he makes no bones about it: If you’re going to pursue it, you need to be prepared to study. In a recent Arc Junkies podcast hosted by Jason Becker, Bowman said that the process for preparing for an AWS certification exam requires “a change in lifestyle.”

The first video in Bowman’s Certified series focuses on how to prepare for the AWS CWI test. Coming in at only 3 min., it’s a short watch that packs in a lot of advice, including being prepared to dedicate a year of studying in order to pass the CWI exam.

Bowman easily could have just sat in his welding trailer and rattled off study tips to produce the AWS video series, but that’s not his style. And it’s not what young welders need to be inspired to take what Bowman describes as the long journey to certification.

So, he tracked down a friend of his, Jesse Larson, that just happens to have won a few Emmys for cinematography, and the two of them set off on a journey of their own to film in Bend, Ore., four hours from Bowman’s home.

“If we were going to make an impact with these videos, we felt like we had to create a new standard for the welding industry,” Bowman says. “It had to be really cool. Fortunately, we were starting off on a good foot – with an award-winning videographer.”

Knowing his audience, Bowman also sought out welders to shoot for the video that had experience earning AWS certification and D1.1 qualification. First on deck was Will Peasley, an up-and-coming welder with a lot of passion for the trade.

“Will is only 22 years old, but he’s already a killer welder,” Bowman raves. “We also used Blair Haverstraw in the video, a welding engineer that works at Central Welding Supply. Blair was the perfect complement to Will as he could give viewers a different perspective – one from the engineering side of things. Blair earned his B.S. in engineering, has his CWI certification and is heavily involved in helping Central’s customers develop effective welding procedures. On top of that, he’s currently studying for the CWS exam.”

In Bend, the filmmakers encountered a dramatic backdrop, one that started out with blue skies that was later cloaked in a haze from the wildfires that had been raging for weeks on end in 2020. As they filmed, temperatures rose to 107 degrees F, but that didn’t stop them – they were in the zone. Leave it to a team of welders to not be phased by the heat.

Overall, Bowman plans to release five videos using footage taken from the Bend trip as well as additional footage taken in his own welding trailer and on-site at Central Welding

“I felt it was important to also speak to the guys that are cutting the checks,” he says. “It’s their money, so it’s critical for them to understand why they should invest in their welders.”

When it comes down to it, Bowman recommends welders go after the CWS first. This is the certification that Bowman says was the personal gamechanger for his career. It’s what inspired him to take a deeper look into the science behind welding and it’s what he says, “will give you the opportunity to gain the most knowledge about the welding process, which will make you an indisposable asset in the welding industry.”

Like the CWI exam, Bowman recommends a year of studying prior to taking the CWS exam. Also like the CWI certification, a CWS certification will open up job opportunities as well as higher rates of pay. As far as the CWE goes, Bowman doesn’t mince words in terms of its importance: “If we don’t have solid welding educators, we don’t have a future in the welding industry.”

It’s statements like these that make Bowman the perfect spokesperson for the value of AWS certifications. But it is his career as a whole that makes him the perfect role model for the welders that will come after him.

To check out Bowman’s AWS certifications video series, head here. To follow him on Instagram or ask him welding-related questions, head here.