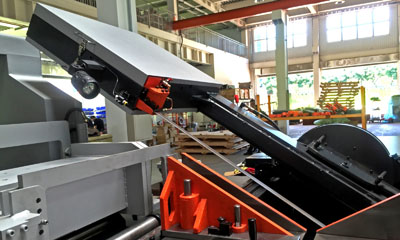 The North American market is hot for automation. Anything that can increase productivity and reduce operator fatigue is a welcome addition to a shop floor. Already supplying that demand with its semi-automatic vertical tilt frame saws, Cosen Saws USA has something new for manufacturers looking for effective automation options.

Cosen’s latest answer to the call for more automation builds on its Mechalogix software platform, which is aimed at monitoring the machine and providing preventative maintenance data that’s simple and straightforward. The company’s AV-2026NC marries Cosen’s vertical tilt frame saw with its Mechalogix software and an automated feeder for a fully automatic system. The end result is a smart saw that essentially allows operators to push a button and walk away – automation at its finest.

To take advantage of the AV-2026NC, the operator simply chooses from a number of cut configurations on a touch screen and the saw does the rest. Michael Finklea, director of sales and marketing for Cosen, says the company began to focus on a fully automatic version about a year ago, which was unveiled at IMTS in September. He says the reception from end users and distributors has been positive.

“[The new saw] does all of the math, so you don’t have to worry about how many shuttles it has to do.”
Michael Finklea, director of sales and marketing, Cosen Saws USA

“We let the word out that we were thinking about building one of these machines and people were excited about the concept,” Finklea says.

The groundwork for full automation was laid about five years ago with the introduction of the manual version of the vertical tilt frame saw. The MVC-670DM gives operators the ability to cut at any angle between 90 degrees (straight cut) and 60 degrees (miter cut) in both directions. The saw provides easy and accurate adjustments for angle cuts. Blade angle changes are made through a manual, gearbox-assisted setup with a protractor scale to determine the angle. Finklea says the manual user is likely to be a smaller shop making limited production runs.

The next generation of Cosen saws came in the form of its semi-automatic vertical tilt saw, the SVC-670DM. This version has the same setup as the manual iteration, but features a fully hydraulic tilt mechanism and a “go-to” feature, which involves Cosen’s touch-screen technology allowing automated tilt control to go to a specified angle when programmed to do so.

The semi-automatic user, Finklea says, is going to have a higher volume of work than the manual user and is looking to make more cuts at a more efficient rate throughout the day. 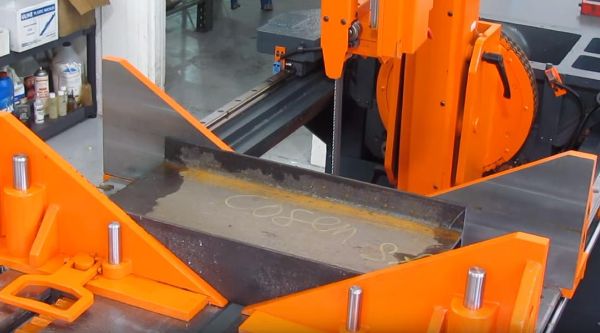 The culmination of Cosen’s product development initiatives resulted in the AV-2026NC, which simply combines two things Cosen has already done: delivering a vertical tilt saw and a fully automatic saw. Cosen had developed fully automated saws in the past, just not in the vertical tilt form.

It also marks a change in marketing as the bulk of the vertical saw sales are made in North America.

The predecessors carry a metric designation (670 cm), whereas the automatic version speaks to the North American audience (the 26 in the product name relates to the 26-in. capacity height). The target audience for the automatic version is manufacturers with large volumes and that produce complicated parts. Because the automatic version utilizes a graphic interface that shows exactly what the cut will look like, the risk of user error is drastically reduced.

Any manufacturer that is making angle cuts could benefit from incorporating the AV-2026NC in their shop. However, Finklea says that the ideal pieces

to cut with the automatic saw are with the saw, but it’s really geared toward cutting profiles.

“We have customers cutting stainless and nickel-based material, such as Inconel and titanium,” he says.

A typical user is a manufacturer that produces trailers, cell phone towers, oil derricks, conveyors or roller tables. Finklea notes they are getting a lot of capacity in a relatively small 180-in.-long-by-135-in.-wide-by-102-in.-tall footprint.

The automatic saw is also well-suited for manufacturers who have more complex angles to cut, either on the front end, the back end or both. A good example is a bull nose angle cut, which can benefit manufacturers making bracing parts. The saw can make many different types of cuts, including opposing angles, parallelograms, polygons as well as straight cuts.

“It does all of the math, so you don’t have to worry about how many shuttles it has to do,” Finklea explains.

The servomotor that drives the feeder, which is situated on a heavy-duty rack, has a feed rate of 220 in. per sec., though Finklea says given the 59-in. shuttle length, it probably never gets up to that rate of feed.

How the user handles materials to and from the saw is completely up to them. For instance, a manufacturer making smaller parts might prefer that the end product be pushed off into a bin, while others might want to introduce a robotic loader into the mix.

Theoretically, the AV-2026NC can run without an operator. Finklea says there are users who run them overnight, lights out. However, Cosen recommends that an operator monitor the saw while in operation, even though the Mechalogix system can alert users via text message or email should something go awry.

Heavily steeped in the industry, Finklea is aware of the perception of sawing equipment’s place in the manufacturing process. He says many manufacturers put the new operator on the saw, or the least skilled person in the shop,which he believes is a mistake given that the accuracy of those first cuts impacts everything that happens down the line. However, it’s another reason to introduce and improve the automation software as Cosen has with its Mechalogix system.

“If you don’t start it out right,” Finklea explains, “you have to deal with that further downstream. It costs you time and money because of tooling costs. There is also cutting time that you may have to spend fixing what you’ve cut incorrectly.”

Finklea notes that in the welding environment, those initial cuts made with the saw are important because any missteps have to be corrected by the welder. If any of the manufacturing steps involve robotic welders, the part has to be spot-on or it might not be usable due to tight tolerances for the components involved in the robotic process.

“We made the automatic version operator friendly,” Finklea says. “You shouldn’t have to have a Ph.D. in astrophysics to be able to program it. Even for someone who really knows what they’re doing, we made the process much easier for them.”

Potential customers should know that Cosen’s current website is not geographically specific in that some of the 130-plus products listed on the site don’t ship to the North America. The company is working on a version that will be specifically for the North American market and will include information about the AV-2026NC.

“We literally just introduced this saw in Chicago at IMTS,” Finklea says, noting that the AV-2026NC will be at Fabtech this month in Las Vegas. 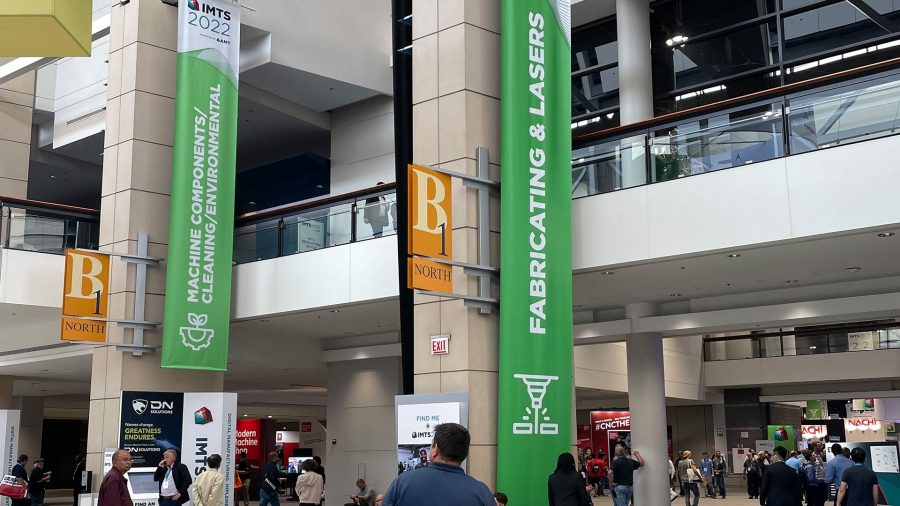