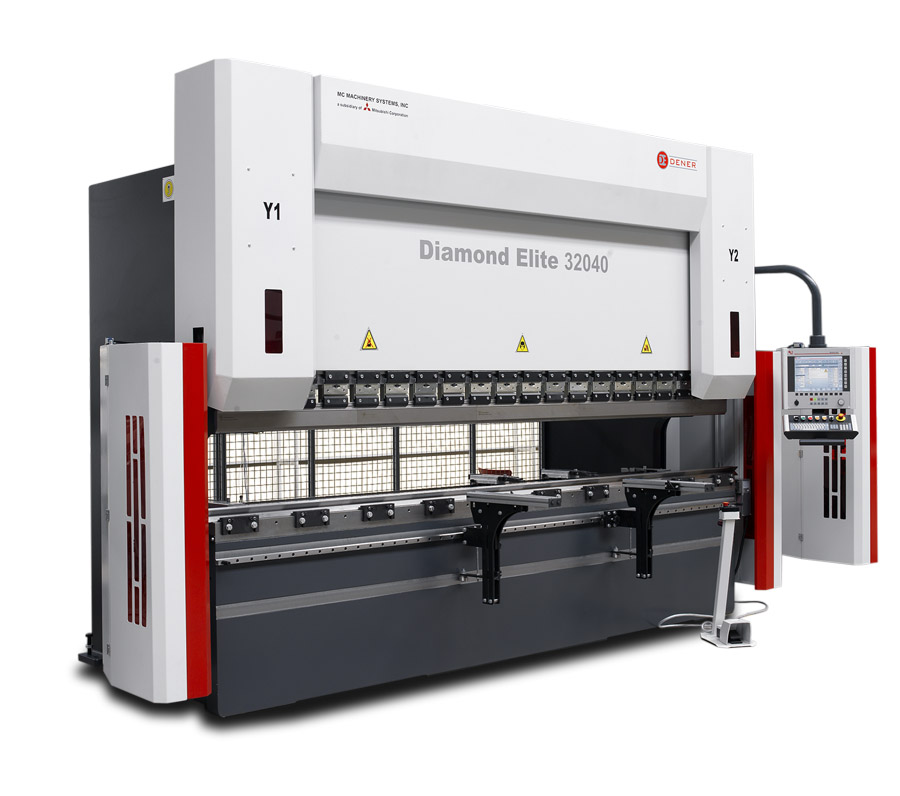 Businesses large and small outsource work if it makes financial sense. For some companies, including Fish Construction Inc., there comes a day when it stops making sense.

Fish Construction is a millwork and casework manufacturer, doing business in a variety of industries. However, it’s their work constructing kiosks and counters for American Airlines that pushed the owner, Scott Fish, to inquire with MC Machinery Systems Inc. about bringing a press brake or two into the facility so the company could stop outsourcing its press brake jobs.

Fortunately, Fish already had a relationship with MC Machinery, a subsidiary of Mitsubishi Corp., and after some conversation, he settled on a pair of press brakes that have the company manufacturing more efficiently, which was important as businesses was growing. 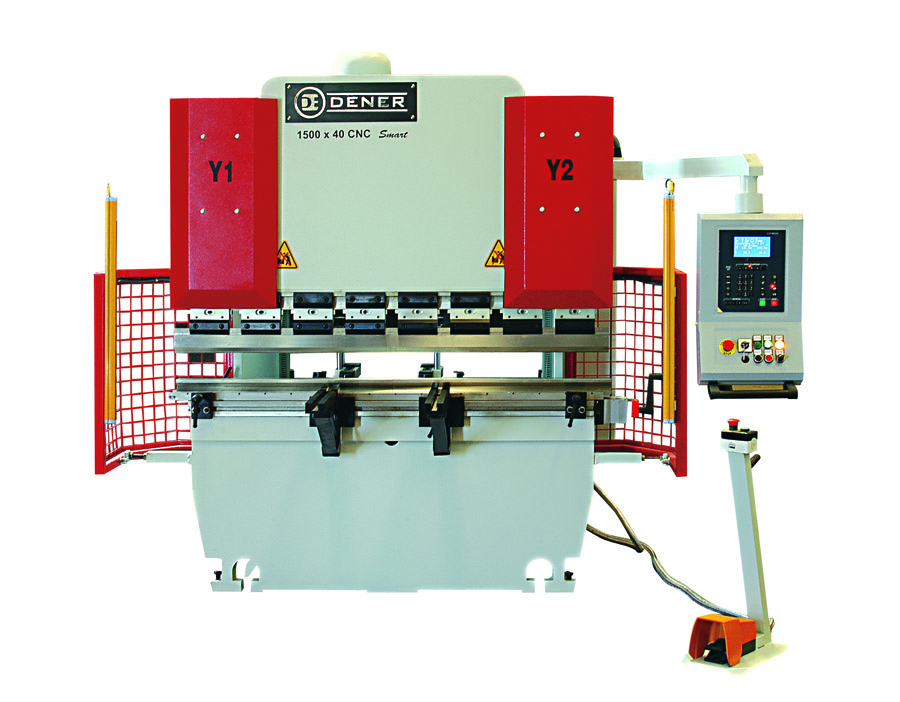 An entry-level press brake, the 40-ton Dener Smart Series is inexpensive, but reliable and accurate. It works well with smaller parts, such as brackets.

As Aaron Fish, vice president of Fish Construction explains, when a traveler goes to the airport to print a boarding pass at a kiosk or check a bag that’s placed on a conveyor belt, Fish has made some of the parts in that equipment. An International Air Transport Association global passenger survey performed last year shows travelers are increasingly looking to go through the airport without agent intervention, which includes using self-service kiosks to speed up their travel process. This explains the extra work Fish is getting for these products.

Unfortunately, some of the stainless steel parts Fish outsourced to a company with a press brake required high-precision bends. Fish wasn’t sure the vendor could meet the required specifications and hit the deadline with all the extra work coming in, so the conversation began about adding a press brake to the line.

“We were very dependent on others when it came to that type of work, and we really felt it was time to bring this capability in-house so we could control our quality and costs,” Aaron Fish says. He adds that they looked at a variety of different press brake manufacturers but they weren’t able to offer the level of customer service Fish expected. “It’s crazy, but a lot of manufacturers were hard to get a hold of or didn’t take the time to help us make the decisions we needed.”

“He had a booming company doing airport kiosks for American Airlines,” Schlachter says of Scott Fish. “They kept giving him more work and he was jobbing work out that required sheet metal fabrication. He wanted to bring that in-house and be more profitable.”

MC Machinery sells high-end press brakes with rams that are accurate to within a micron. But Schlachter talked to Fish and discovered they wanted a press brake that was dependable, accurate and not too over the top with bells and whistles they didn’t need, and they wanted half-degree accuracy bends. 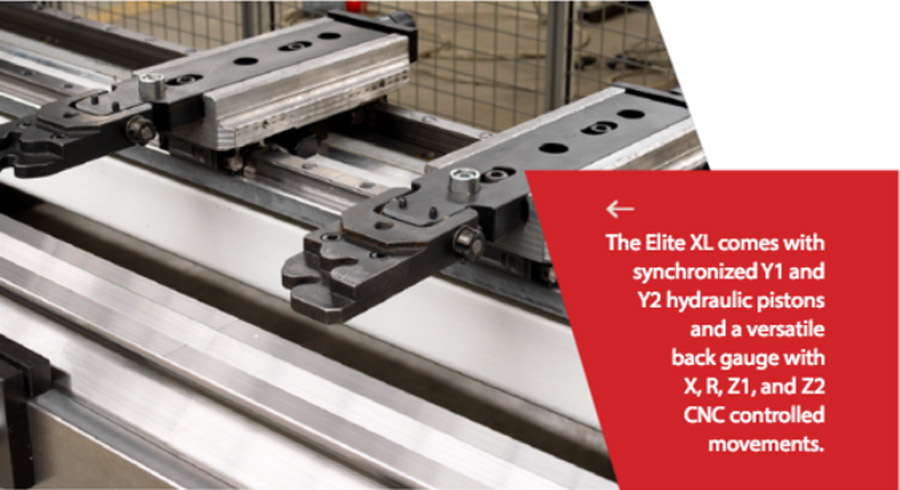 Two is better
Fish realized one press brake wouldn’t fit all of their sheet metal bending needs, so they chose two hydraulic press brakes from MC Machinery partner Dener, a Turkey-based company that manufactures plasma and laser cutters, press brakes, guillotine sheers and corner notchers. Fish, with the help of Schlachter, decided on the 40-ton Dener Smart Series and a 320-m-by-4-m Elite XL. The newly acquired press brakes have become workhorses for the shop, Schlachter says.

The Elite XL, the larger of the two, comes with synchronized Y1 and Y2 hydraulic pistons and a versatile back gauge with X, R, Z1, and Z2 CNC controlled movements. It features a standard 2-D Windows touchscreen, which makes programming easy, even for new operators. The CNC crowning on the machine ensures the long bends that Fish makes on sheet metal are accurate and straight.

The Elite XL also has 3-D offline programming capabilities that Fish can implement in the future should the company see the need for it.

Schlachter refers to the smaller machine, the 40-ton Dener Smart Series, as inexpensive, accurate and reliable. Fish is using it to produce small brackets and other smaller parts. 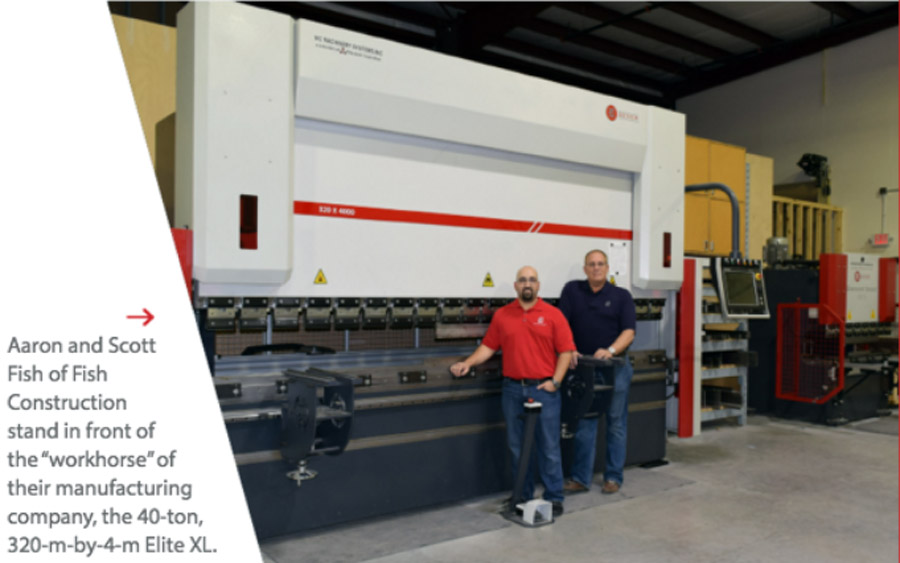 “We were very happy with the quality of the machines and think they are some of the best out there,” says Aaron Fish. “As cliché as it sounds, the customer service was what really made the decision for us. MC Machinery helped us with everything from selection, to installation, to training our team on how to use it. They are always willing to come out or just walk us through any questions over the phone.”

Part of what attracted Fish to MC Machinery is that the machines it sells are price competitive with other press brake manufacturers, but the MC Machinery press brakes have about 10 percent more of just about everything within its class – gauging, stroke, open height and speed.

“When you get down to the basics,” Schlachter explains, “there are a lot of machines on the market that look familiar. We put features on the machines that add value to the customer, but don’t add a lot of cost. Within its normal class, we generally have about 10 percent more features that we try to include and still be in the thick of things with competitors.”

Schlachter says the machines MC Machinery carries have better open height stroke speed, which is the kind of perk many customers want. They also look for more open height so they can maneuver larger parts in and out of the machine. A back gauge with extended reach with several stop positions frees the operator from having to build his own stops to accommodate a short-reaching back gauge.

In Fish’s case, they chose optional hydraulic clamping for fast tool changes. With more work coming in, Fish knew they would benefit by having a more efficient tool change process. 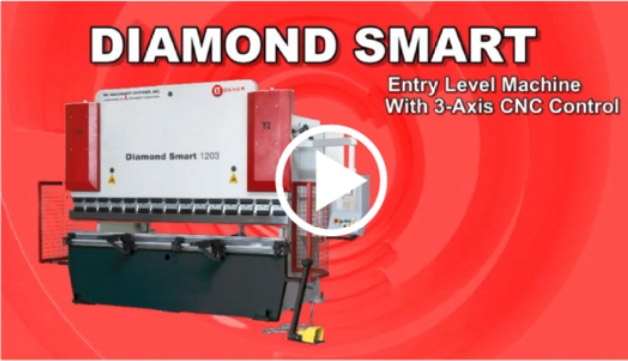 In this video, MC Machinery introduces its line of CNC press brakes.

Many machine manufacturers build products that are only compatible with their products. MC Machinery has taken a different route.

“We don’t make products that force the customer to buy only from us,” Schlachter explains. “The biggest players seem to offer software or tooling that’s only from them … you can only program their brakes with their software and are forced to buy their tools.”

MC Machinery works closely with Radan, a software company based in the Netherlands. They’re a worldwide company, but if a customer prefers another software vendor, Schlachter and his team will make it happen.

“This creates more opportunities for us and doesn’t force the customer down a road they don’t want to travel,” Schlachter says.

This philosophy also extends to safety products, tooling – anything that is an extra to a base model machine. Even if it’s something Mitsubishi or Dener produces, MC Machinery works with the customer to get the extras they need from other manufacturers if that’s their wish.

“I can tell the customer the pros and cons of any equipment they are considering, and then let them decide.”

One of the benefits of being a subsidiary of the Mitsubishi corporation is that MC Machinery can provide services that smaller companies cannot.

“We are a sales and service organization,” Schlachter says, “but we have an applications group.”

The applications group is responsible for doing all the demonstrations and makes themselves available for support after the sale. If a machine is installed and 30 days later or 30 months later the customer needs support, the application group jumps into action.

“We’ll put an application worker on a plane at no charge,” Schlachter explains, “fly him in there and go through the training of the programming.”

The service department, which is a separate entity, takes on the initial training and the installation and repairs. Subsequent service department appointments are not free. However, if a customer has an operator suddenly quit, the application department will usually send someone in as fast as possible to get them back up and running.

“If they have a question about how to form a part,” he says, “we’ll roll up our sleeves and do what we can. I get that all the time … We’ll review drawings and quote tooling that we’re not making a dime on, but you want to keep the customer happy, say good things, and hopefully buy another machine down the road.”