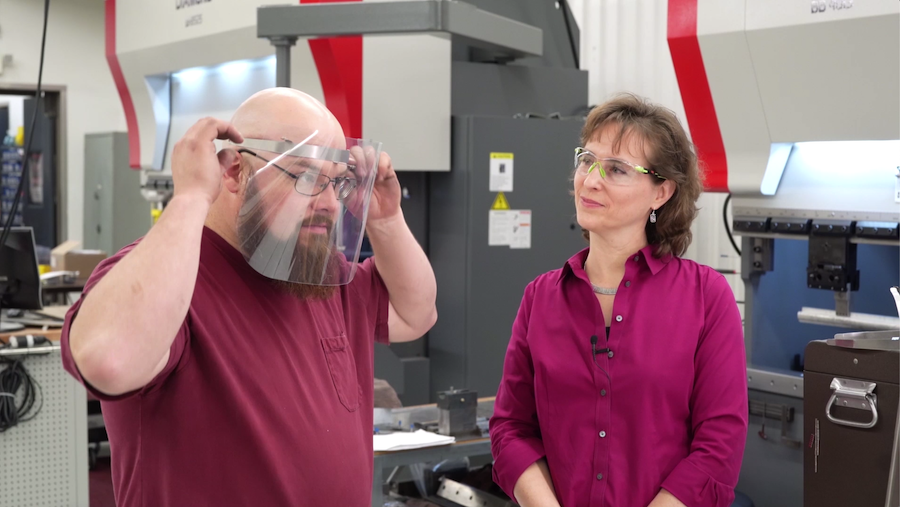 Healthcare workers worldwide have been on the front lines working tirelessly to care for those stricken with Covid-19. Their stories of heroism have circled the globe, but so, too, have the stories of widespread PPE shortages.

To ensure that the limited stockpiles of N95 masks could be reserved for the doctors and nurses that needed them most, thousands of home crafters broke out their sewing machines to produce unsanctioned fabric masks to be worn in non-medical settings. But shortages still remained, forcing hospitals to seek out new N95 suppliers or attempt to sanitize used masks and source alternative means of protection, such as the plastic face shields often associated with hazmat gear.

For some hospitals, local maker labs got to work 3-D printing masks. While the generous efforts temporarily filled the PPE void, the strategy was ultimately unsustainable. For starters, 3-D printers, especially the home-hobbyist type, are too slow for mass production. To add insult to injury, sanitizing all of the nooks and crannies in the 3-D printed masks proved to be difficult and time consuming.

Partly out of desperation but also partly based on pre-existing relationships and proximity, Cayuga Medical Center (CMC) in Ithaca, N.Y., reached out to Incodema Inc. for help. Incodema is a precision cutting and forming sheet metal manufacturer specialized in prototyping. Initially, CMC’s goal was to procure any type of face shield they could get – even the fast-turnaround type that uses non-sanitizable materials like foam or low-quality plastic that can only be worn once. Incodema, however, had other ideas and decided to make face shields that could be sanitized and reused.

“We’re located right down the road from CMC, so the doctors and nurses that work there drive by our facility every day,” says Illa Burbank, president of Incodema. “When they originally came to us, they were having a lot of trouble sourcing and were open to any ideas we may have had. So, we looked online and found all sorts of different prototypes for face shields, but most of them involved elastic or foam that were hard to source and basically impossible to sanitize.”

Since prototyping is Incodema’s bread and butter, they were naturally motivated to develop a brand-new design. As an ITAR-certified fabricator with 20 years of experience making parts for military and defense, medical and semi-conductor industries, and for other applications in robotics, automation and electrical grids, among others, it was a welcome challenge. The overriding goal was to produce something that could be cleaned and reused.

“That’s when the collective lightbulb went off,” Burbank says. “We work with stainless steel, and we know that so many medical devices are made from stainless steel because of its ability to be easily sanitized. It was a no-brainer.”

“During these difficult times, people have been trying to do anything they can to help,” Burbank says. “Whether it’s sewing masks at home or using any other skills they have to help out, everyone is doing their part. And since we’re a metal shop, it made sense to us to use our prototyping skills – and our equipment – to do our part.”

And, considering Incodema is accustomed to producing its own tooling, the company used its Mitsubishi MV1200-R wire EDM machine to create the necessary tooling to bend the parts on its Mitsubishi Diamond BB4013 press brake. It should be noted, however, that the face shield design doesn’t require the use of a press brake machine. Simple hand tools can also accomplish the bending that’s needed.

“We made four or five samples for the hospital to test out,” Burbank says. “It’s one thing for us to think that we have a cool design, but it’s essential to get user feedback. So, they tried them out, tested the process to sanitize them and gave us some feedback to make a few minor tweaks.”

Three days later, Incodema made the first official production run. Shortly thereafter, the company presented additional face shields to a CMC team that was heading to New York City to provide some much-needed relief to the healthcare workers there.

Turning on a dime

Solving problems has been ingrained in Incodema’s DNA since day one. The company took root when the founder, Sean Whittaker, was working in new product development at a company that made thermal printers, like the type that prints out the waxy receipts one might get at a gas station. Whenever Whittaker needed a metal component for a new design, he was often presented with quotes that reflected weeks and weeks of lead time.

“Typically, people want to do production; they don’t want to have to deal with constantly making newly designed parts,” Burbank explains. “It takes a lot of time and a lot of skill to create a prototype, and because Whittaker had personally experienced the lack of companies that were positioned to fill that void, he decided to do it himself. So, in 2001, Incodema launched focusing on quick-turn, metal prototype components. Since then, it has grown into an organization of four sister companies that function independently but also support one another.” 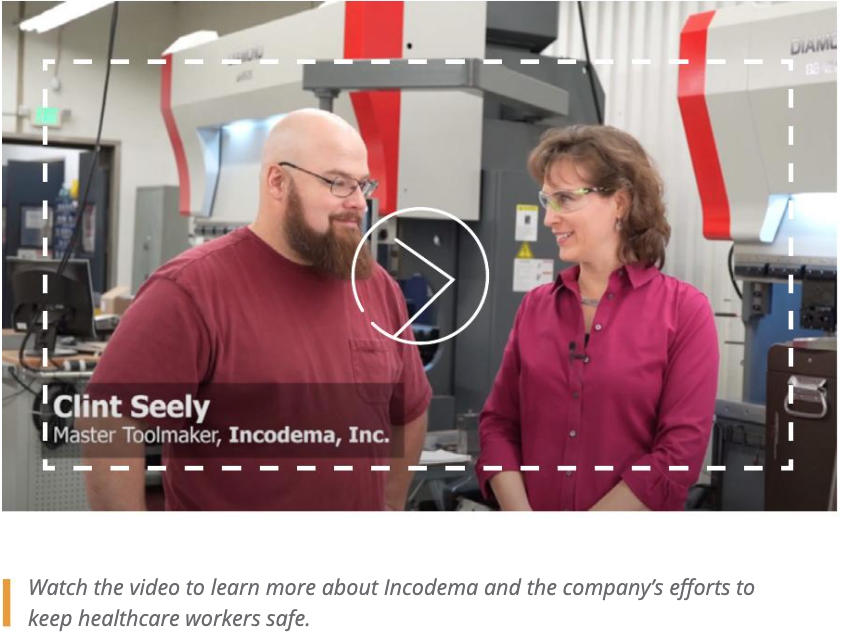 Supporting others has always been a major overriding theme for Whittaker and the entire Incodema team. Burbank mentions that “taking care of our own” was the sentiment that first motivated them to produce the face shields. And it was what propelled the company to also produce masks for a local elder care facility, a doctor’s office and other local medical facilities.

“We always wanted to help our local healthcare workers, but we soon realized that it didn’t have to be limited to local facilities,” she explains. “’Taking care of our own’ could also be applied to the greater global good, so we posted the plans for the shield mask on our website for anyone to use. Not that long ago, we were contacted by a company in Ireland that wanted to use our design, and it’s not that far-fetched to assume that others have taken advantage of it.”

For the staff at Incodema, there is a great sense of pride knowing that their skills and know-how were translated into a product that is keeping people safe – in their local community and around the world. In fact, when the company found out about the busload of nurses that were heading to New York, one of the employees volunteered to work a double shift to make sure they had the PPE they needed. Fast turnaround times, after all, were why Incodema first got its start.