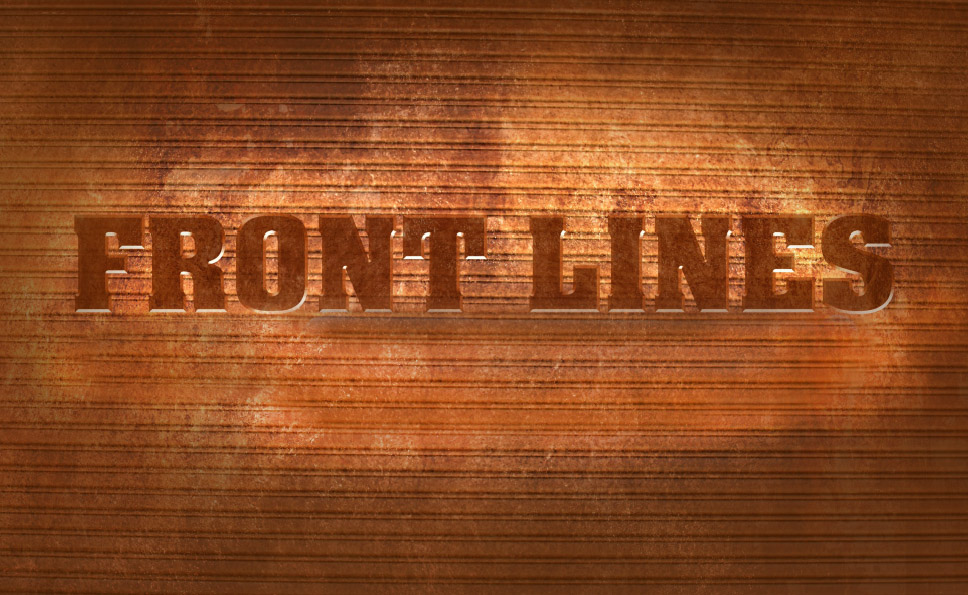 First Down Laser Systems’ technology was originally developed for football games and other sporting events, but its industrial applications are obvious, as well. “More and more, we find there are a lot of different ways to use our system, including in factories and warehouses,” says Alan Amron, founder and chairman.

One way the laser line system is used in warehouses and factories is traffic control. When a customer comes into a warehouse and needs special direction, preset projected laser lines specific to that customer show up on the floor throughout the warehouse and direct them where to go.

“And they can be automatically changed,” Amron says. “The operator can just press a button and the lines in the warehouse change direction to show where a different customer should go.”

Another way the system is used is for safety. Projected laser lines can replace the cautionary safety lines warehouses and factories are mandated to have in place. When forklifts or other machinery ride over them or people walk on them, the painted or striped lines start to wear. The laser line system eliminates the need to repaint or restripe the safety lines on the floor every few weeks.

“In a huge warehouse, that repainting or restriping takes a lot of effort, time and cost,” Amron says. “With our system, you can step on the lines all you want. The laser line shows over anything. And if you want to move the line, you can just move it. Or you can make the line brighter or dimmer.”

Stanley Black & Decker is the first industrial customer for First Down. After hearing about the laser line system through sporting news and business media, Stanley contacted First Down about using the system in an industrial setting. First Down is making a first installation at a Stanley warehouse in the next few months. 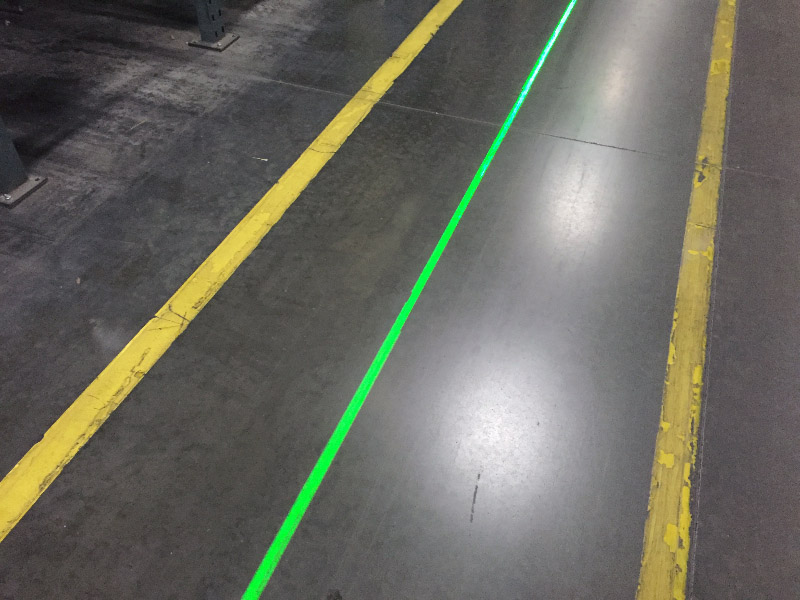 A laser line projected onto the warehouse floor at Stanley Black & Decker in North Carolina. The laser line system eliminates the need to repaint or restripe the safety lines on the floor every few weeks.

The laser line system is set up with laser projectors mounted on locked tracks in the warehouse ceiling. The settings are all preprogrammed in a central computer and an algorithm tells which projectors to go on and how bright the YAG laser should be based on the ambient light (existing light) in the building. If the warehouse lights are brighter than normal or if sunlight is coming in or it is nighttime, the laser brightness is adjusted based on that ambient light.

The system can use fiber lasers or fixed lasers. With the fiber, each projector is wired into the centrally located computer system with fiber optics. The laser source is located in a remote secure location in the building.

With the fixed, the projectors can be set up with a mobile application and can be controlled by the Internet or Wi-Fi. “Depending on the installation, we can have a 1- to 7-watt laser projector on its own in the ceiling with no wiring,” Amron says.

“But we suggest you hard wire in case there is a problem with the Wi-Fi or Internet,” he adds. “We like to have a failsafe at the warehouse location so someone can come in and work it right from there.”

As for drawbacks to the laser line system, Amron doesn’t see any. For instance, Stanley knows exactly how much it costs the company each year to move a painted line or to not be able to use the aisle while the line is drying. It is more cost-efficient to install the laser line system because they know the system will pay for itself. 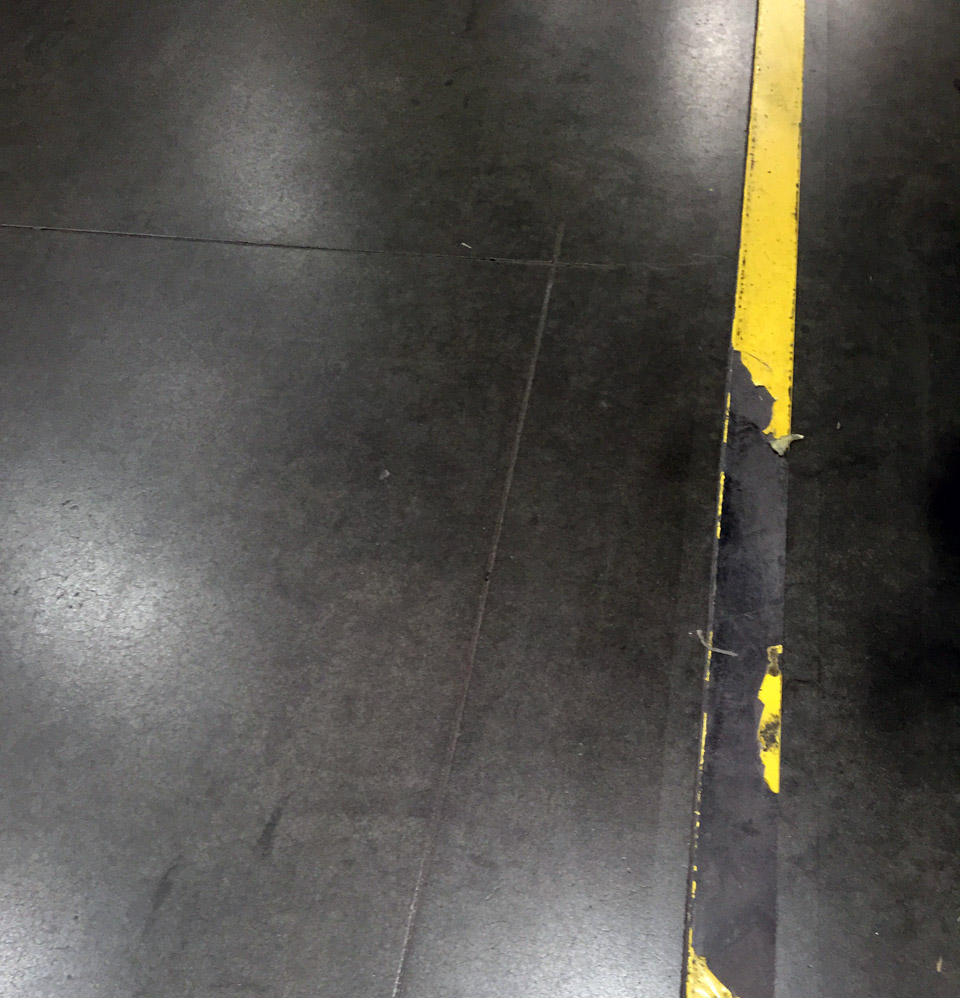 When forklifts or other machinery ride over them or people walk on them, the painted or striped safety lines start to wear.

Amron adds that the equipment is failsafe and factory warranted. “We offer maintenance contracts just like any other company, but once the equipment is mounted, it stays there,” he says. “Dirt and humidity are not an issue because the units are hermetically sealed. Nothing affects the internal workings of the lasers. That is not to say that dust won’t accumulate on the lens and we have to clean it, but it won’t affect the equipment itself.”

First Down installs, services and guarantees the equipment, but it doesn’t sell it. “We buy our lasers from IPG Photonics and then we lease them,” Amron says. “Until we get to the point where we know the customer can keep this system for 10 years, we lease it to make sure the customer is very satisfied before they actually purchase it.” 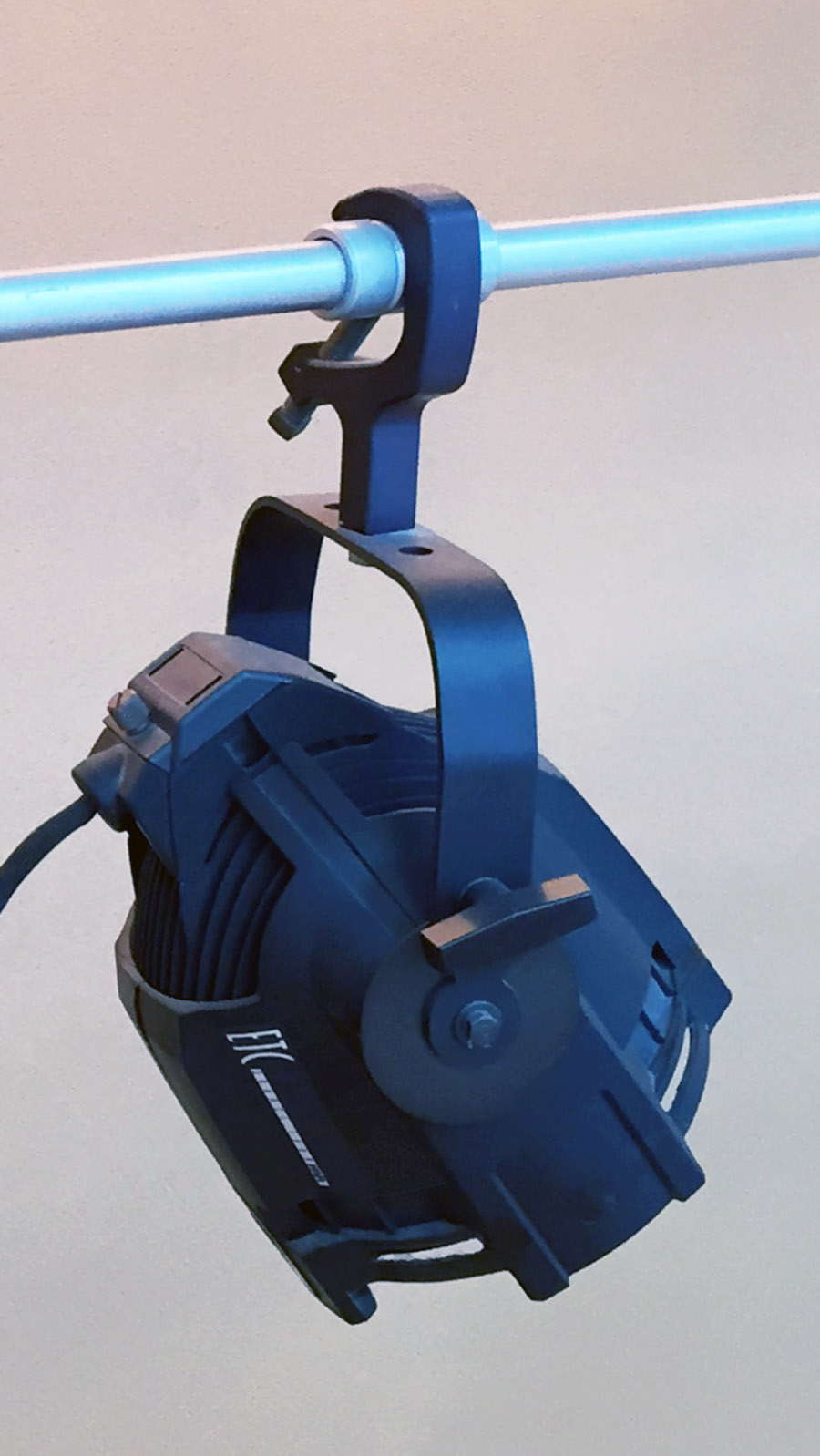 Indoors, the laser line system is set up with laser projectors mounted on locked tracks in the ceiling.

Additional apps
Another application for the laser line system is the mining industry. When a driver is backing up his truck to the crusher to dump the ore, if he doesn’t line it up properly, some of the ore is lost. The workers paint guidance lines on the trail, but as one can imagine, they become so dirty in about an hour that the driver can’t see them anymore. “We came in and put a laser line on the ground and that guides the driver straight back and it never gets dirty. 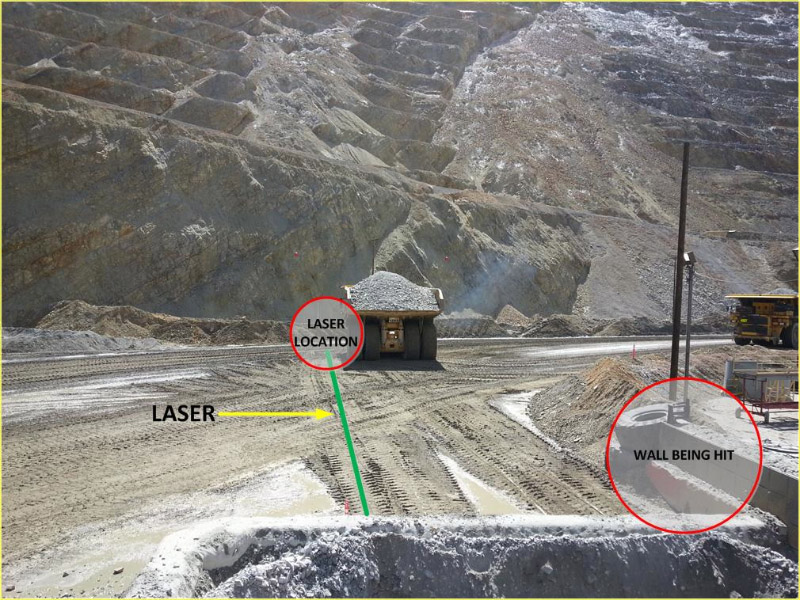 As previously mentioned, the original application for the laser line system is on a football field. It’s used to project a visible line to indicate the first down line. The players and everyone in the stadium would see it, as well as everyone watching on TV. The system is now scheduled to be tested with the Canadian Football League, and First Down is in discussion with the National Football League, which is very interested.

The laser line system has been used at the NCAA Outdoor Track and Field Championships for two years in a row. In track and field, the laser line can actually improve the competitors’ performances as they push to exceed the visible record line marked by the laser. Other sports applications can include soccer, car racing and horse racing.

The laser line system projects a visible line to indicate the first down line on a football field.

The outdoor applications do require a special type of laser. “Working with IPG, we have come up with a unique 100-watt YAG laser that is 1.5 ft.2, runs on 24 V and is air cooled,” Amron says. “On a bright, sunny day in Arizona, you aren’t going to be able to see most lasers. But we add more wattage to beat the sun. The 100-watt YAG laser gives us the power we need.” 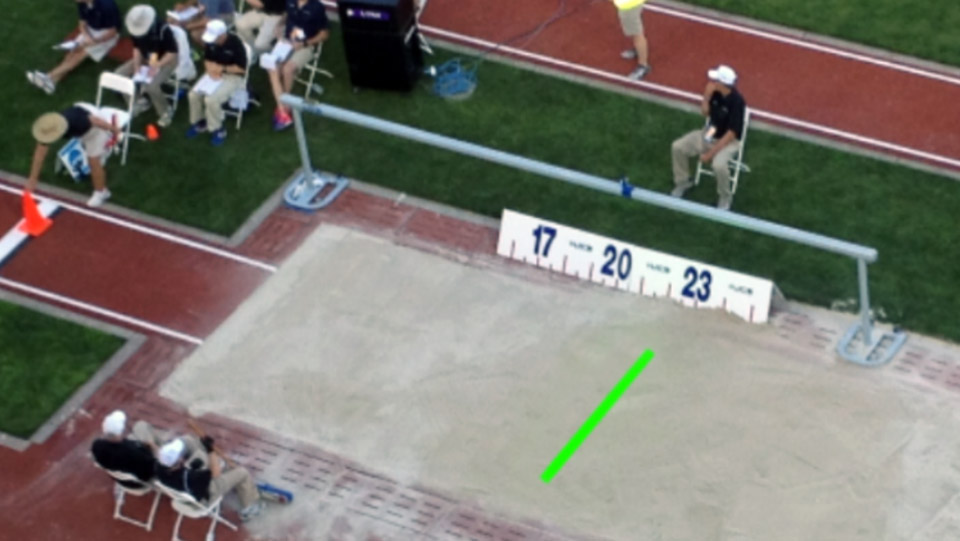 The laser line system has been used at the NCAA Outdoor Track and Field Championships for two years in a row.

And First Down is the only company that can provide this technology. “We’ve been doing this for 10 years and we still have patents,” Amron says. “We have the patents for any delineation with a laser in more than 50 percent ambient light.”