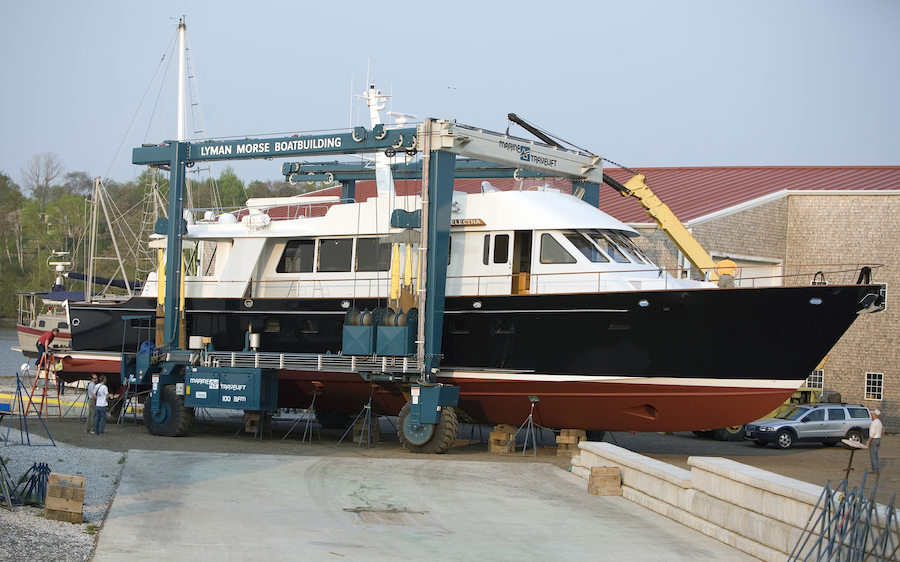 “I was born with a gas torch in my hand,” says Jonathan Egan, fabrication shop manager, Lyman-Morse Boatbuilding Inc. “My father taught me metalwork. He ran car depots and sold tires, but British sports cars were his passion, and he spent all his free time in the family garage. It was a serious hobby.”

Though Egan spent his youth working around cars, today boats dominate his time. He runs the fabrication shop at Lyman-Morse, a company born in 1978 on a site along the coast of Maine where wooden schooners have been built for more than 200 years. Lyman-Morse operates two boatyards and a modern metal fabrication shop, which is Egan’s domain.

Between the two boatyards and fab shop, there are projects at all stages of construction and repair. A variety of custom and semi-custom sailing and motor yachts are in progress at any given time, including new builds, refits, upgrades and restorations. A Lyman-Morse built boat can reach 130 ft. in length, move with the use of a sail or engines, and cost from tens of thousands to many millions of dollars.

Approximately 100 full-time craftsmen work for the company. Many have made a lifetime career of fine boat building, some being third-, fourth- and fifth-generation shipwrights and custom boat builders. These craftsmen are skilled at working with a multitude of natural and man-made materials: wood, bronze, brass, copper, titanium, steel, stainless, aluminum, iron, fiberglass and composites.

Seaworthy materials need to provide strength and rigidity while remaining light, responsive to steering and mindful of fuel consumption. Modern technologies and methods are incorporated throughout the process while in-house designs are tempered with traditional and Downeast designs. This is Maine after all.

Not surprisingly, the company’s busiest months are in late winter and early spring as owners focus on getting their boats ready for the upcoming warmer weather. It is during this time that Lyman-Morse’s boat builders work 12-hour days, seven days a week.

While still busy during the remainder of the year, Lyman-Morse does have a little more leeway to take on other projects which it happily accepts because, as Egan says, “If you can build a boat, everything else seems simple. A boat is basically a house on water. It requires plumbing, electrical work, fine cabinetry, mechanical aspects and so on.”

“The XPR300 cuts everything for all three Lyman-Morse locations, plus general contractors and the public,” Egan says. “We’ll do anything, from fixing a lawnmower blade to a newly fabricated spiral staircase or even a five-story hotel. We keep a full stock of metals on hand so we can react quickly. Sometimes we’re given plans, but we have three design engineers on staff who can draw anything using SolidWorks CAD software.”

The company has produced conveyers, tanks, solar mounting kits, aluminum window cladding, architectural projects, structural steel buildings and ornamental ironwork like stairs and railings, fences, gates and signs, among other things, in a range of thicknesses from 18 gauge to more than 2 in. The XPR300, selected with Hypertherm’s OptiMix gas console option, is on a system designed and built by Messer Cutting Systems. The Messer MetalMaster Evolution gantry is attached to a cutting table Messer refers to as the Slagger.

This design, in which the gantry is attached to the table rather than the floor, really appealed to Egan because the Lyman-Morse shop uses radiant heating. While offering numerous benefits, the radiant heating system prevented the shop from bolting the table gantry to the floor as is more typically done.

Egan was also impressed by the Slagger’s auto cleaning feature. The system is designed to push slag from the bottom of the bed to the end of the table and into a pan for easy disposal.

“I wanted the XPR system from the start, but did my due diligence and researched table manufacturers,” Egan says. “Messer had the nicest unitized machine with the gantry connected to the table. This way, if we move the machine, the gantry goes with it and tolerances are tighter. I also didn’t want the control monitor attached to the gantry and have the operator move along with it. That was a safety concern for me.”

Jim Naczek, Messer’s project manager, worked with Egan during the process of vetting, acquiring, installing and training on the new equipment.

“Jonathan flew out to Wisconsin to perform process capability testing on an actual system at our headquarters,” Naczek says. “He had serious equipment demands for stainless cutting and was pleased to see that the system could do what he needed. With the MetalMaster Evolution we’ve brought together two of our most productive designs, the EdgeMax and MetalMaster Plus and added innovations in bevel cutting, beam design and unitization.”

Though Egan is very happy with the purchase, he admits a new plasma system wasn’t always his first choice.

“I needed to get past the waterjet myth first,” he says. “I thought that I could only use waterjet because of the heat-affected zone produced by plasma. Saltwater corrosion on stainless steel is nasty and a real concern in the boat business. I don’t want to disappoint our customers after they have invested so much. Through my research, I realized that plasma has come a long way. The heat-affected zone is minuscule, about 0.001 in., and can be easily knocked off with a grinder. Plus, we mirror polish the metal anyway.

“We can cut fast with the plasma and do things that we couldn’t do with the waterjet,” Egan continues. “Waterjet is just so slow and requires more maintenance. The XPR300 is a wonderful machine. Cutting with Hypertherm’s Vented Water Injection [VWI] process was the biggest selling point for me. With VWI, we get such clean cuts on stainless and aluminum that I don’t even need a waterjet. The edge quality is amazing.”

The XPR300 selected by Lyman-Morse utilizes Hypertherm’s new class of plasma, X-Definition Plasma. When paired with the right cutting system like the one from Messer, the system is capable of maintaining ISO 9013 Class 1 and 2 tolerances and ISO 9013 Range 2 and 3 cut quality. Further, the system can deliver edge surface finish that is generally smoother than fiber laser in the thicker ranges and extremely consistent edge quality over the full life of a consumable set.

Lyman-Morse’s new plasma system also includes SureCut technology, giving the company access to Hypertherm’s True Hole process, which it uses on mild steel. In addition, the company utilizes the XPR300’s marking capabilities to note where the bend and weld lines are for its operators.

Lyman-Morse is confident this new cutting table will afford it much greater control of project timelines and undoubtedly open the door to a wider marketplace as the first fabricator in Maine with X-Definition cutting technology.