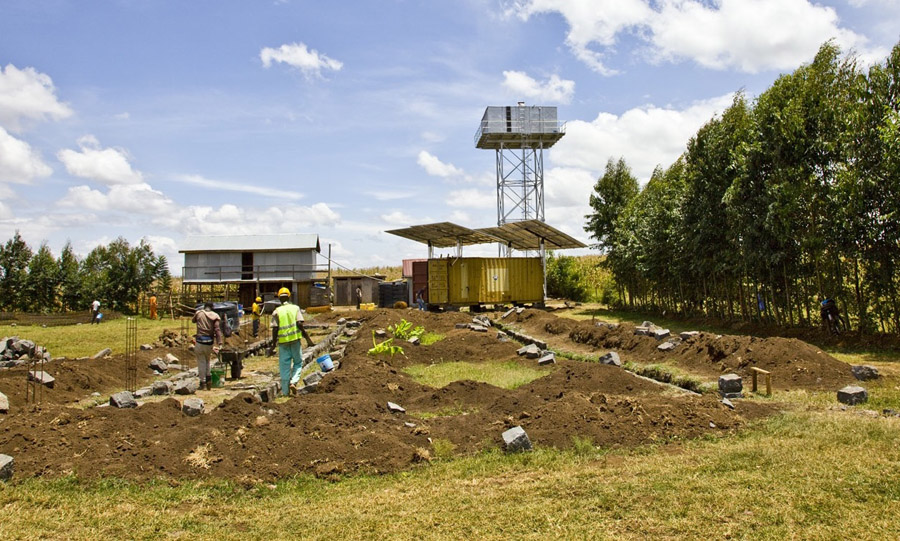 The Mathare Valley slum in Nairobi is a place beyond the imagination of those of us born in the developed world. Roughly 600,000 Kenyans live in an area measuring just a few square miles, many of them children whose parents have died of AIDS.

The primary source of water is the river flowing through the center of the valley, water that’s contaminated with raw sewage and human waste. Cholera and dysentery are rampant as are gang and inter-tribal violence, drug abuse, prostitution and government corruption.

It’s a place that few police dare tread, let alone the aid workers and religious organizations that try to help the residents trapped within, beautiful people with names like Andrew and Flora and Lamek. It’s also the place where Greg Burns found his purpose in life. 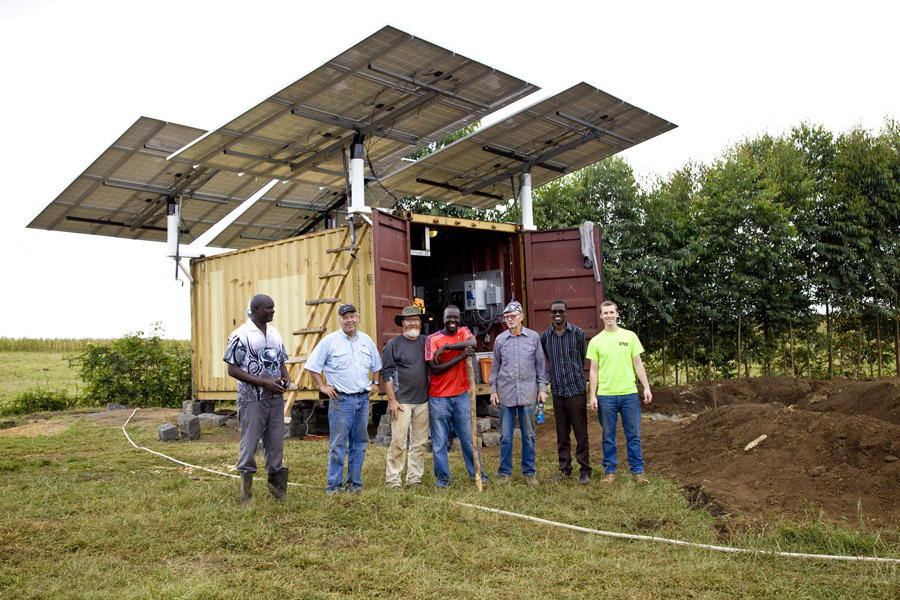 Greg Burns and his team installing the One Life solar power plant.

Thirty years ago, Burns left his job in the aerospace industry and went into business for himself. A mechanical engineer by trade, Burns leveraged what he’d learned about forging to design and produce ring mills, complex machines that turn red-hot billets of metal into the seamless rings used in everything from aircraft to windmills. And because no machine tool can be built without other machine tools, he opened a machine shop to support his work.

Over the years, Burns Machinery has grown substantially – as have the other aspects of his business. Burns purchased a Mazak 4-kW fiber laser several years ago so he could more effectively produce a line of sprockets he’d developed for off-road motorcycle racing. To feed the laser with bottled nitrogen, he designed his own nitrogen generators, too. For Burns, it seems as though ingenuity comes easy. 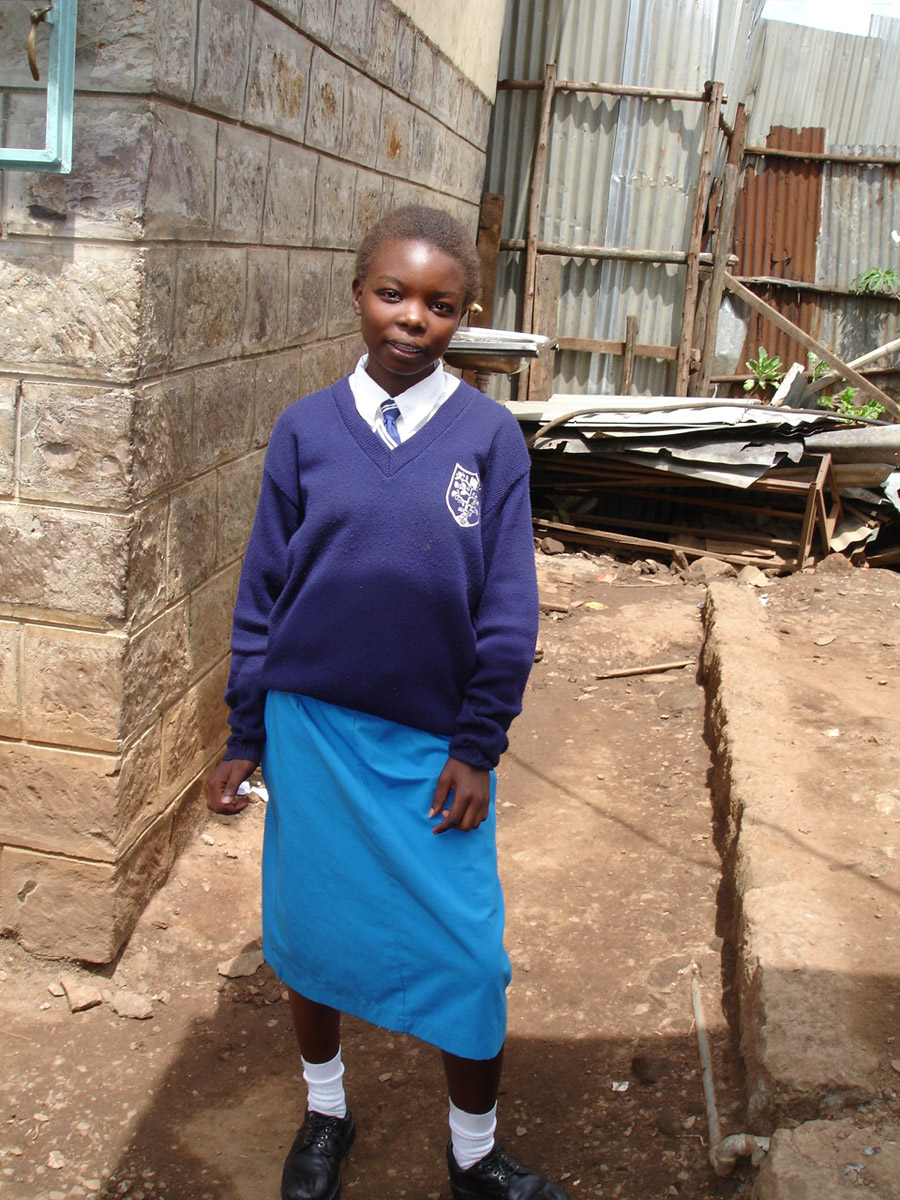 Twelve-year old Flora Savai, ready for the next step in a difficult life.

But despite being the center of these growing businesses, Burns is of the age where the finish line is in sight. So, there was talk of easing back on the day-to-day grind and possibly selling off some or all of his business ventures and finding a nice quiet ranch to retire on. After all, he’d earned it, and it would give him more time to tinker on his airplane. 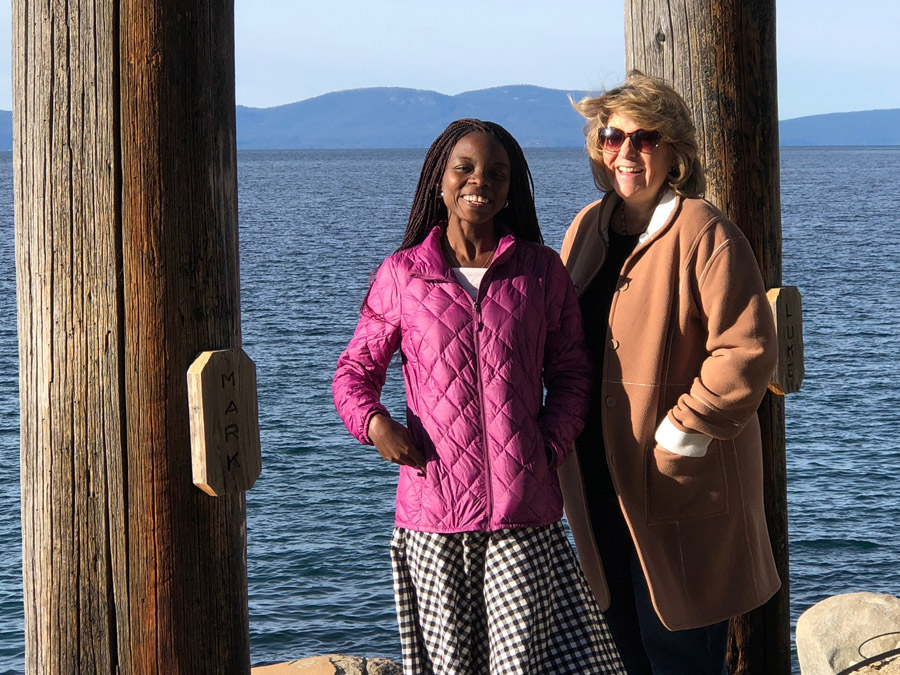 Attorney Flora Savai and Kristine Burns during her recent visit to Minden, Nev.

Burns notes his daughter is partly to blame. While attending college several years earlier, she asked her parents if she could bring an exchange student friend of hers home for Thanksgiving dinner. That evening, Kenyan Andrew Onguka shared his experiences of life in the Mathare slum.

Onguka and the Burns family became fast friends, and they stayed in touch through his graduation and beyond, with the family even arranging to help the young man earn his Master’s degree at Boston University.

It wouldn’t be long, however, before another Kenyan would enter Burns’ life, one that would also have a significant impact on his future. “Four of us from my church decided to visit Nairobi and see if the things Andrew told us were as bad as he’d described them,” Burns says. “I can tell you that they were. But on that particular trip, we also visited a nearby school. That’s when we met Flora Savai.” 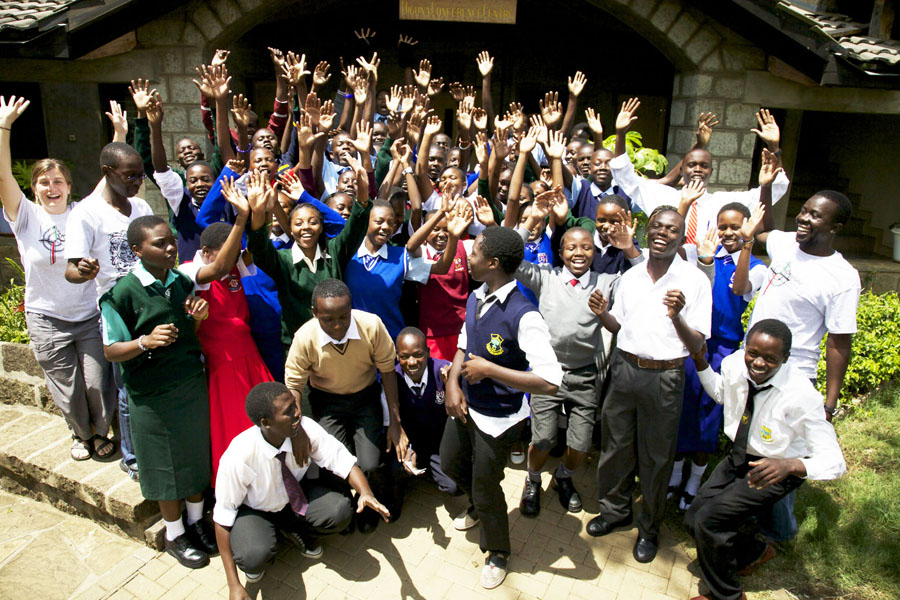 The students at the One Life Africa camp, celebrating another day of newfound opportunity.

One in (almost) a million

In Kenya, says Burns, people must pay for at least part of their children’s education, even though most of them earn less than two dollars a day. This isn’t college we’re talking about, but rather kindergarten and elementary school, where uniforms and books are the responsibility of the students.

For those that even reach 8th grade, a national merit test determines which of the students are qualified to attend high school. The few that are accepted must then pay the full tuition along with living expenses at an area boarding school. 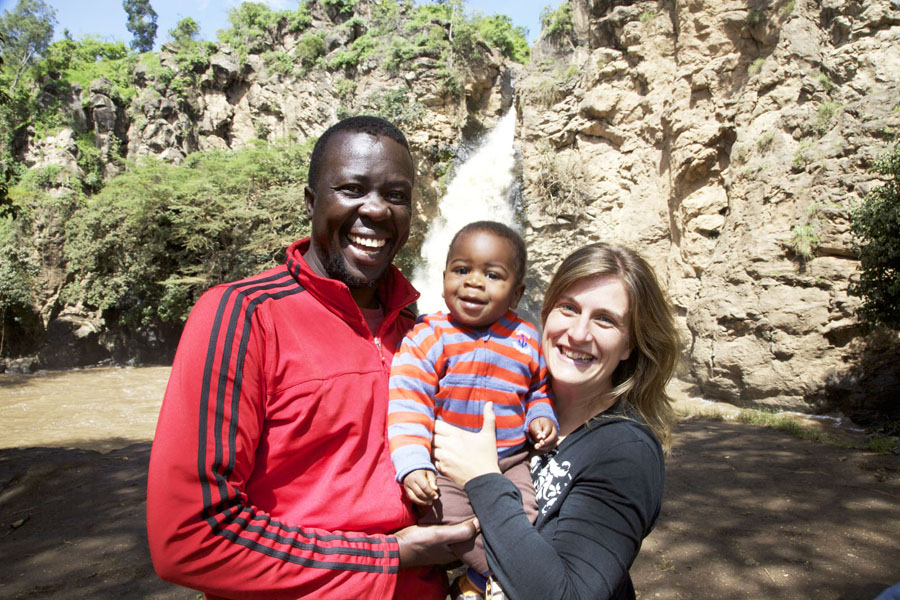 The man who started it all, Andrew Onguka with his family.

“It’s not expensive by our standards – maybe $700 a year for the school together with room and board, yet it’s cost prohibitive for most,” Burns says.

In Flora’s case, she had earned the highest score in the nation out of 800,000 8th graders but didn’t have the money to attend. It was inconceivable to Burns that this tremendously bright young girl, who saw and endured so many terrible things growing up and should have had such a wonderful future, would be unable to receive the education that, in our country, is taken for granted.

“That’s when I decided my life is about serving others, that I was put on this earth for more than self-enrichment,” he says. “It changed everything for me.” 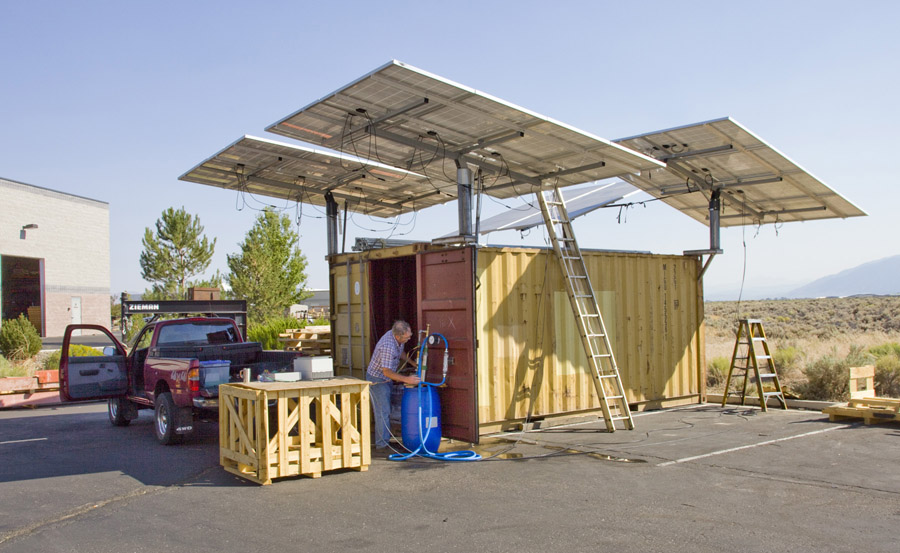 Preparing the power plant for its journey to Kenya.

Upon their return, Burns, his wife, and several members of Bridge Ministries in Minden formed the One Life Africa organization. Over the past 12 years, they’ve focused on helping as many students as possible progress through high school. The organization has raised money for books and uniforms, helped raise teachers’ salaries from $80 to $100 per month, developed a summer camp program that brings together members of opposing tribes and connected top achievers with sponsors here in the United States.

The result? Nearly 200 young Kenyans are attending high school or have moved on to college, with three medical students and multiple engineers among them.

In the midst of all this, Andrew Onguka – now married to a physician from Georgetown University – moved back to Kenya, where he and his wife have been assisting in the groups’ efforts. Says Burns, “Andrew is our feet on the ground over there. He makes sure the students’ tuitions are paid. He makes sure they go to camp and that they are mentored throughout school. This all started because of him, and he’s been very instrumental in its success.”

It may have started because of Andrew, but Burns has taken the “how can I help” ball and run with it. He and his colleagues’ most recent project is a 13,000-sq.-ft. facility called the One Life Center, in nearby Nakuru.

“We found that, when our kids graduate from high school, it’s in the month of November, but they can’t actually start at the university until the following September,” Burns explains. “Instead of leaving them in limbo for 10 months, we decided to take the opportunity to educate these ‘gap year kids’ further, teaching them the basic computer skills that they would otherwise never have learned.” 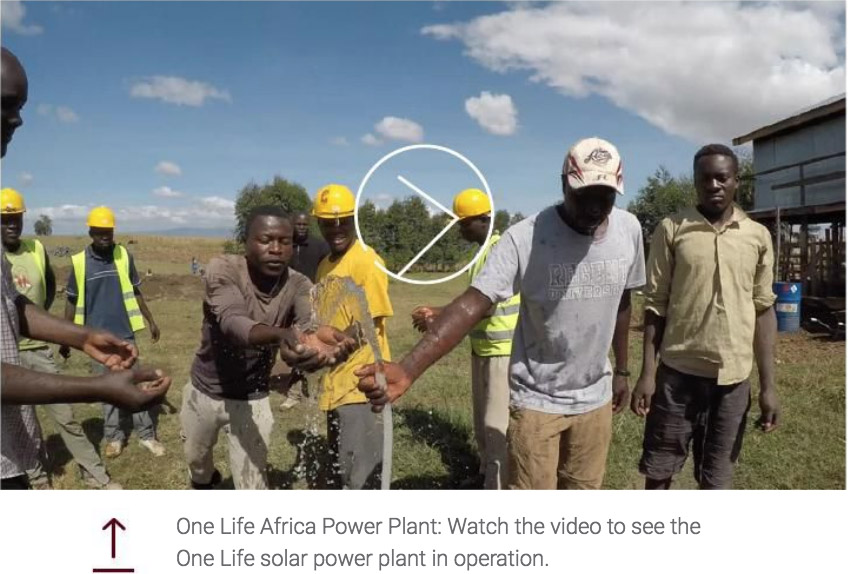 To make all of this work, however, water and electricity were needed. The team purchased a generator but quickly found that the $50 a day in diesel fuel was unsustainable. Burns took his usual problem-solving approach: using a cargo container as a shell, he designed and built an 8,000-W solar power plant at his shop in Minden, had it shipped to Kenya, then went onsite to oversee its installation and the drilling of an 800-ft.-deep well.

“The power station pumps 7,000 gallons of water a day and generates enough electricity to keep the entire facility going,” he says. 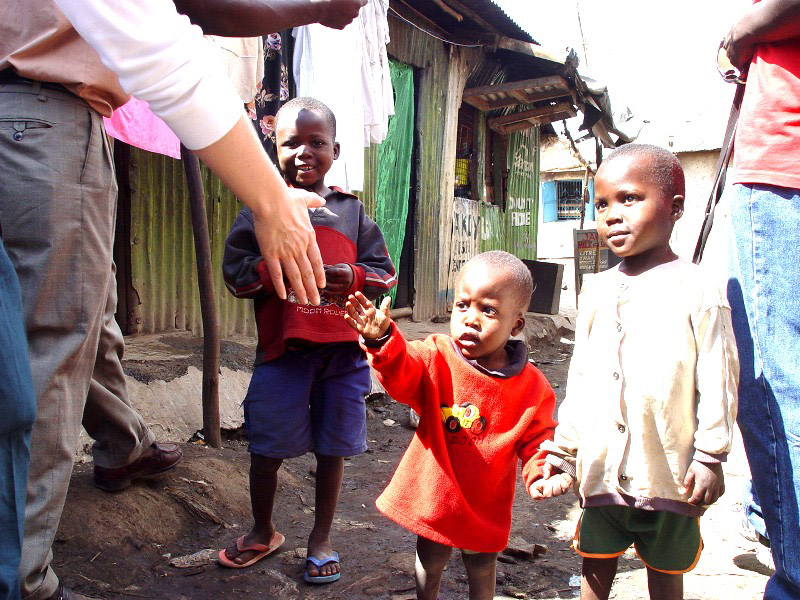 Many of the children in the Mathare slums are orphans, with little chance of a better life.

From One Life, a new life

Throughout this entire period, Flora has continued to blossom along with the organization. With One Life Africa’s help, she attended a prestigious high school. Upon graduation, the Kenyan government decided she should attend college for “library science.” Flora decided she would rather pursue a law degree, so that one day she could hopefully right some of the many wrongs in her country.

Here again, the Burns family stepped up to the plate, helping the young woman with her tuition. She recently passed the bar exam, and after a life spent in a 10-sq.-ft. shanty shared with her mother and siblings, looks forward to getting her own apartment and following in Burns’ footsteps.

“Flora’s become our adopted daughter of sorts,” he says. “She even calls me Dad. We brought her to our home recently so she could spend more time with us, and we had long conversations about where she thinks Kenya’s going and how she would like to be a part of its future.

“Flora is a shining example of what’s possible through programs like these,” he continues. “She saw things in the slums that she will not talk about, but she rose above it, and her goal as an attorney now is to work for a human rights organization that can help her promote and protect children and women from abuse. I’m very proud of her and happy that I could be a part of her life.”