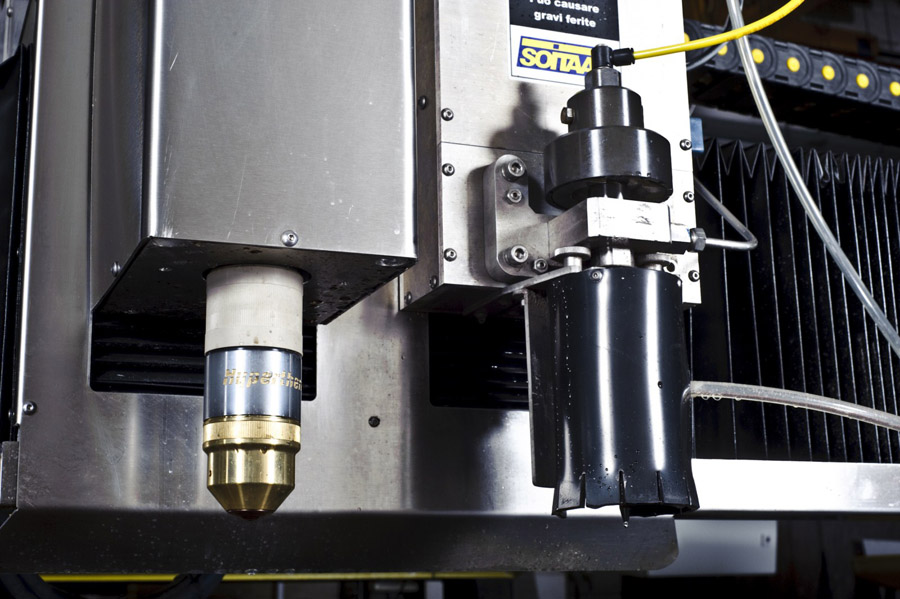 A waterjet/plasma combination machine offers versatility and flexibility for everyone from small and medium-sized shops to large companies. It can help a company expand into new markets without having to invest in a new machine dedicated to one cutting process.

The high cutting speed and low cutting costs of plasma coupled with the high precision and versatility of waterjet allows users to save on production time and costs. From the CNC, the operator can program the waterjet and plasma cutting needed on the same part on one machine.

The waterjet and plasma technologies share a cutting table, gantry system and motion controls. The gantry positions the plasma or waterjet cutting head over the sheet metal. Across the gantry, two servo-driven motorized platforms independent of each other provide the up and down motion for the heads. The side to side motion is driven on a single carriage if the heads are for straight cutting only or on separate independent carriages if one or both cutting heads are bevel heads. 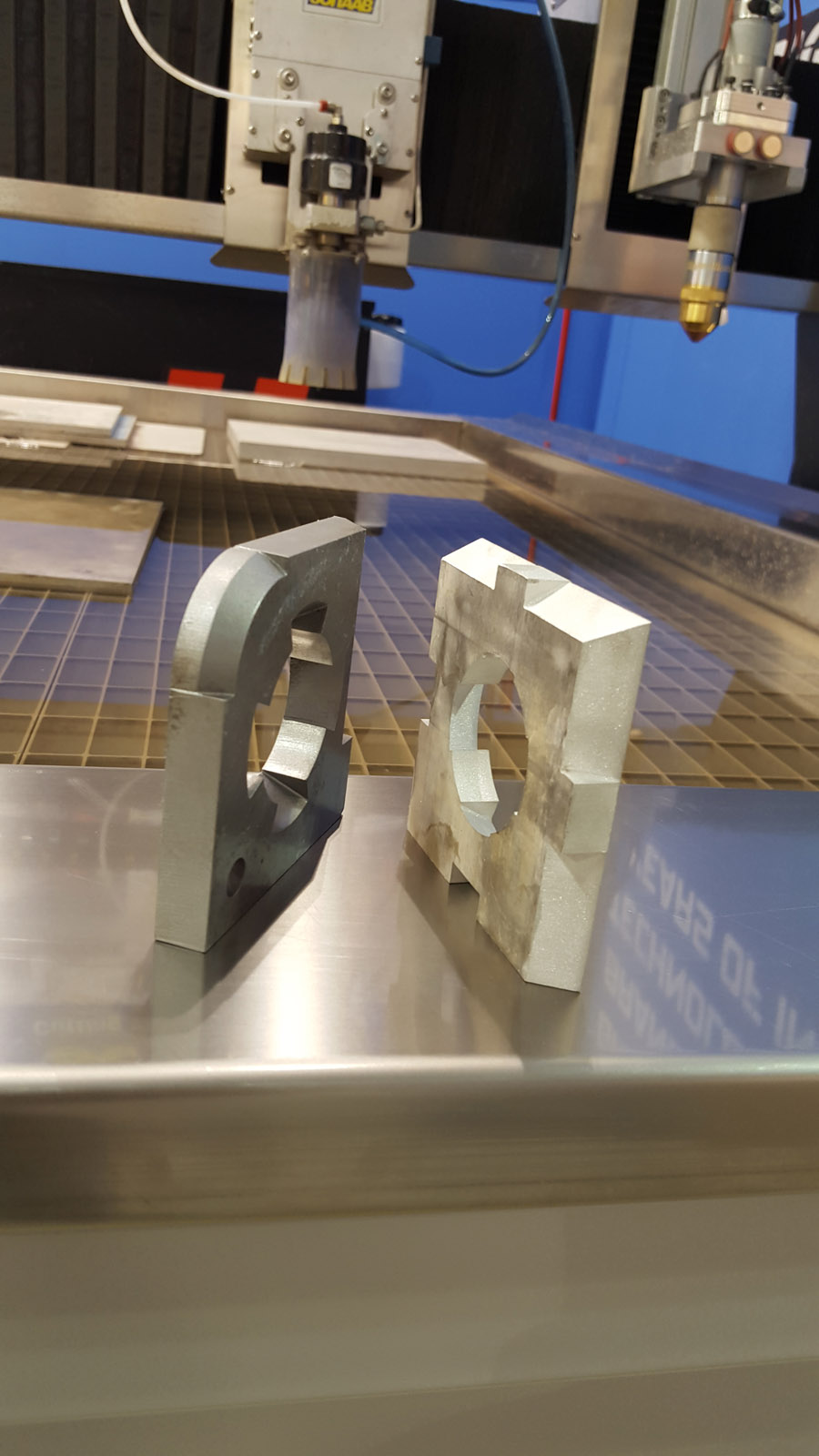 Soitaab’s Dualine waterjet/plasma combination machine created these beveled pieces with inside and outside bevels as well as plasma cut contours.

Every cutting process has its strengths and weaknesses, and waterjet and plasma are no exception.

Waterjet’s biggest advantage is its precision. It can cut accurate parts and complex shapes that require no secondary finishing operations. Waterjet cuts almost any type of material and cuts extremely thick material, including up to 12 in. steel. Also with waterjet, there is no heat-affected zone.

Another advantage of waterjet is common edge cutting. “With plasma, the kerf (width of the cut) is so wide that one side of the cut is going to be perpendicular and the other side is going to have a slight bevel angle because of the plasma arc,” says Dave Maxham, vice president of sales and marketing at Soitaab USA. “With waterjet, the edges are perpendicular on both sides and the kerf is much narrower allowing for common edge cutting.”

The disadvantages of waterjet are slow cutting speeds compared to other cutting processes. Also the slow speed combined with the garnet abrasive cost makes waterjet an expensive cutting process. There are high maintenance costs as well and it requires a higher upfront investment than plasma cutting systems.

The advantages of plasma include high cutting speeds on a variety of thicknesses. Plasma can efficiently cut material 2 in. thick and materials up to 4 in. or 5 in. thick for rough severing cuts.

Other advantages include low maintenance and low operating and consumables cost.

Disadvantages of plasma are it is less precise, especially on small holes and fine contours. The large kerf width prevents cutting in small corners and common edge cutting. And plasma cutting creates a heat-affected zone. 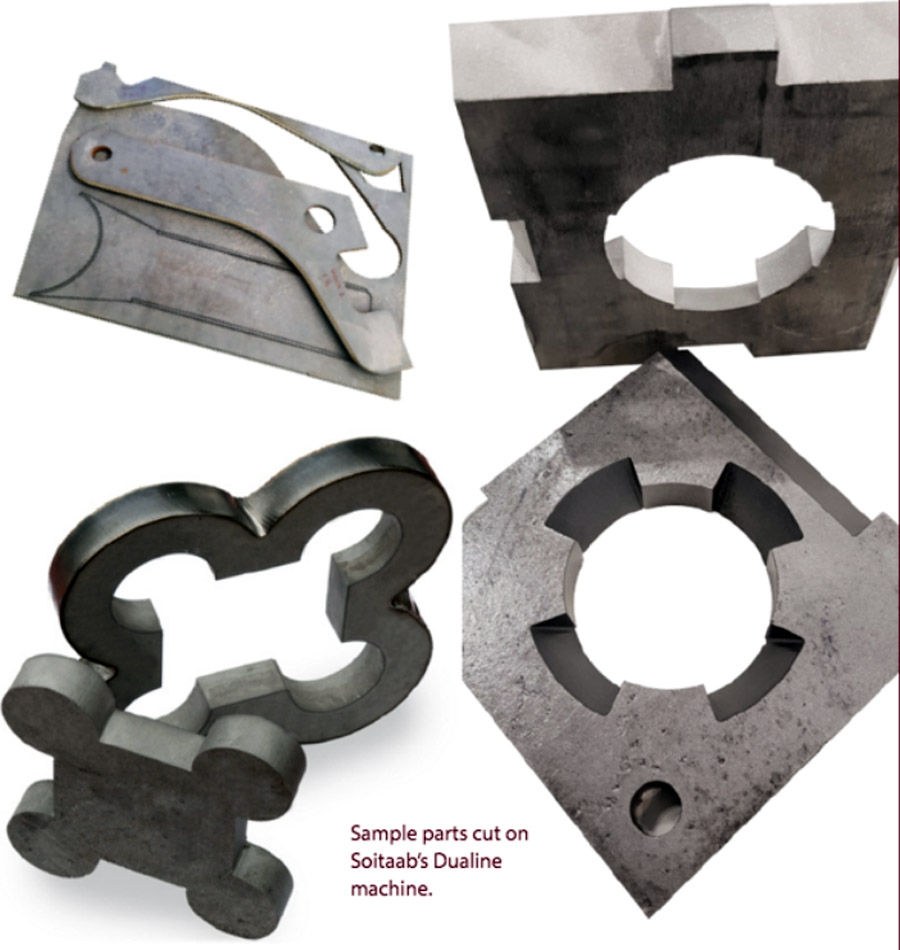 The biggest advantage of the waterjet/plasma combination is the reduced cost to produce parts.

“Anything you can cut with plasma is going to drastically reduce the cost of the part,” Maxham says. “Plasma costs less than one-third the hourly cost of waterjet when cutting the same material.” 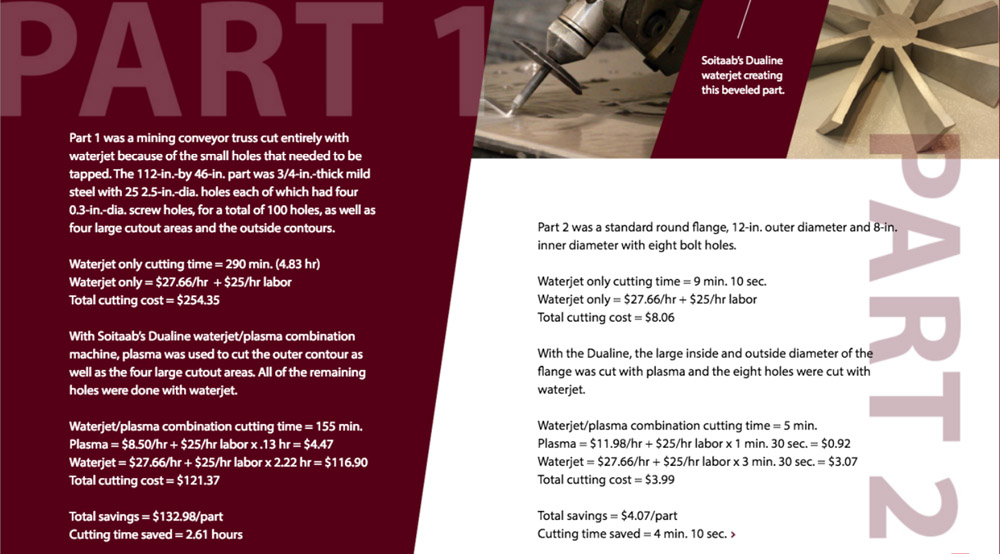 While plasma is always better as far as cutting costs, waterjet must be used in some applications, such as for holes that will be tapped after cutting.

“If the holes are cut with plasma it creates a heat-affected zone and the material becomes hardened,” Maxham says. “That will tear up the tap almost immediately. So the operator is forced to cut them with waterjet because it is not a heat thermal process, and then use plasma to cut the inner and outer contours.

Another caution when cutting holes is the general rule of thumb that if the hole diameter-to-thickness ratio is below 1:1, the holes should be cut with waterjet. “Anytime the ratio is below that 1:1, plasma becomes a problem, particularly with the perpendicular walls of the hole,” Maxham says.

Of course, he adds, companies often cut with less than a 1:1 ratio every day. It depends on what quality of hole is needed and how skilled the operators are and how much intervention they have to do to program that hole correctly.

Maxham notes that with plasma, it is often easier to cut harder materials than soft. When cutting a hard material, the arc cuts through before damage to the side walls begins. With softer materials, the arc has a better chance of overburning the bottom edge of the cut.

“That is where you need to be careful going less than 1:1 ratio in a hole,” he says. “If you’re cutting aluminum or small diameter holes, you’re going to wash out the bottom of the cut edge or hole wall with the arc before you finish cutting. With stainless steel, you have a better shot at doing a ½-in. hole in ¾-in.-thick material because you aren’t going to have that problem with the bottom of the hole.” 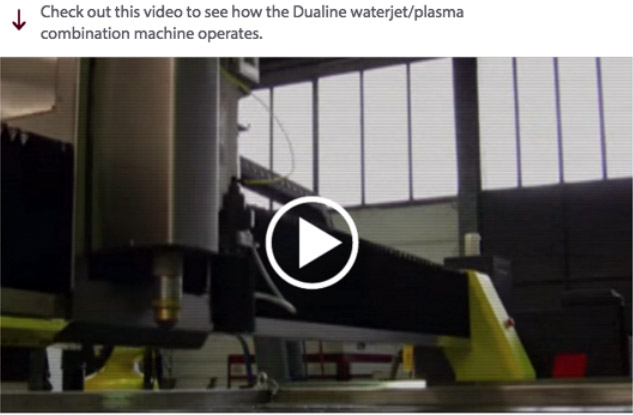 Because waterjet is such a harsh, abrasive cutting process, certain features and options are going to make the machines last longer.

Also, when an intensifier pump does require a rebuild, it takes about 30 to 45 min. The direct-drive pump takes about four to 12 hours to repair, plus the cost of all the replacement wear parts.

Waterjet cutting generates a slurry of abrasives and metal materials that constantly goes into the tank. A shop has two cleaning options. Weekly or monthly, an operator can drain the tank and shovel out the muck or the shop can pay to have it pumped out.

A better option is an abrasive removal system. This system pumps the water out of the tank on a continuing basis, removes all the abrasive and other scrap, and puts the water back in the tank.

“For waterjet machines in high use, I recommend making the $25,000 to $30,000 investment for an abrasive removal system because the return on investment is so high,” Maxham says.

Maintenance is also important to increasing machine life. Waterjet is a dirty process and abrasive dust builds up on all the equipment. This is where a machine can start to have problems.

To protect the mechanically moving parts on Soitaab’s machines, they are protected by covering them with internal bellows and a second external bellows for maximum protection. In addition, unlike some machines where the bellows are level with the floor, Soitaab makes sure its bellows are at an angle steep enough to drain the water rather than allowing it to accumulate and sit on top of the bellows.