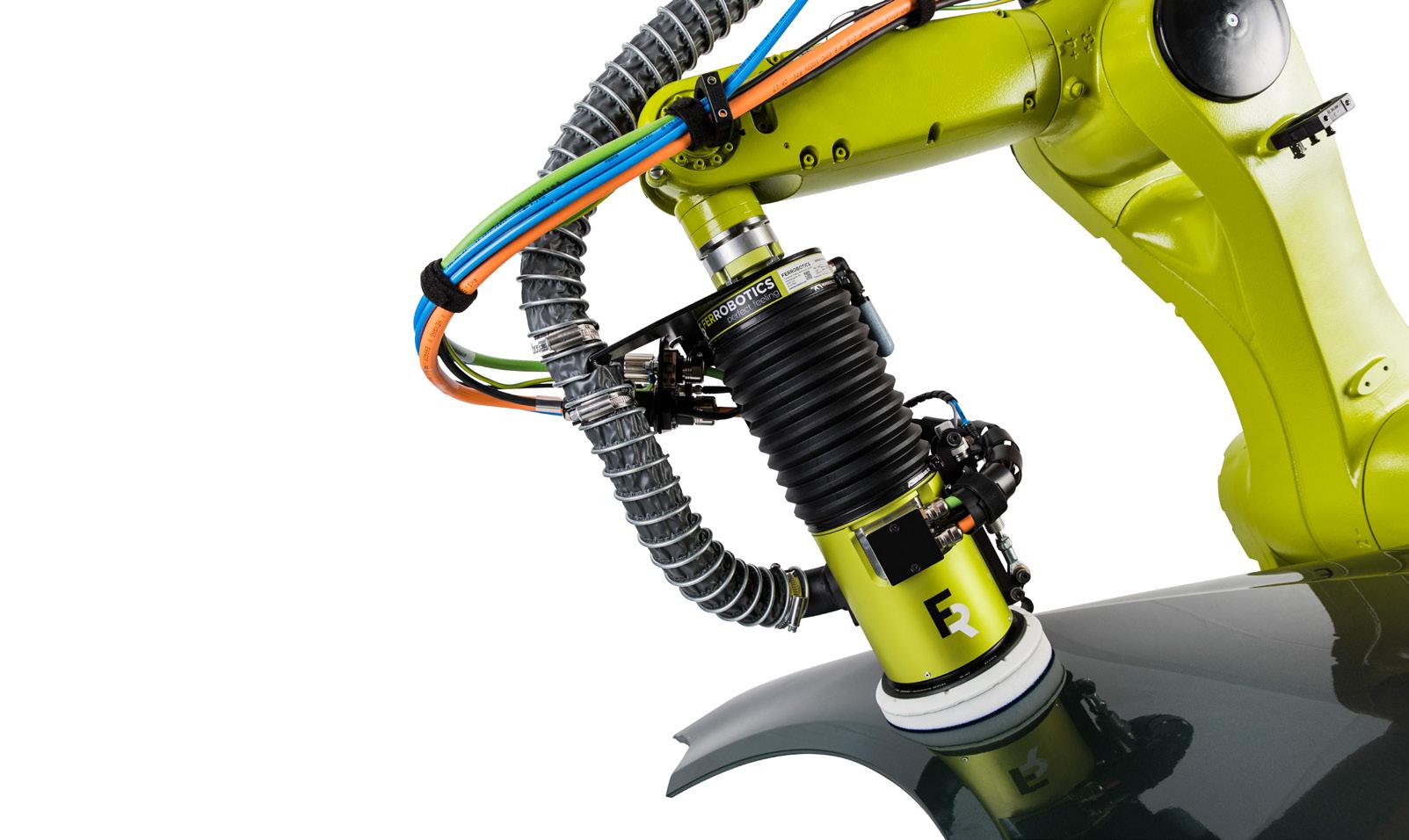 The fact that automotive manufacturing is highly dependent on automation isn’t breaking news. A myriad of operations have been fully automated for quite some time, including welding, assembly, machine tending, material handling, painting and coating. And, there are a myriad of reasons why automakers have been ahead of the curve for so long in terms of automating their operations. Automated systems increase quality and manufacturing capacity while also protecting workers and adding flexibility.

Additional operations, such as deburring and finishing, however, haven’t been as quickly automated. Historically, these operations have been highly manual due to the . sensitivities surrounding the amount of – or lack of – force that must be applied.

According to the Springer Handbook of Robotics, force control is a “fundamental requirement for the success of a manipulation task,” which “is the capability to handle the physical contact between a robot and the environment. Pure motion control turns out to be inadequate because the unavoidable modeling errors and uncertainties may cause a rise of the contact force, ultimately leading to an unstable behavior during the interaction, especially in the presence of rigid environments. Force feedback and force control becomes mandatory to achieve a robust and versatile behavior of a robotic system in poorly structured environments as well as safe and dependable operation in the presence of humans.”

In simpler terms, proper force control technology is the key ingredient in making sensitive tasks such as deburring and finishing easier to automate.

In recent years, robotic OEMs have placed significance on force control R&D. FerRobotics Inc., a developer of flexible, intuitive robotic equipment, has been integral in the advancements made in the field, citing its patented active contact technology to make robots “develop a sense for perfection.” The company says the technology applies to “every task conceivable in surface treatment and contact-sensitive handling in the automobile, general industry and aerospace sectors.”

Leading the charge for FerRobotics advancements in robotic technologies is Ronald Naderer, co-founder and CEO. His technological focus has been on contact-sensitive robotic solutions, equipping robots with the tactile sense necessary for a variety of tasks. BMW, Mercedes, Audi, Peugeot, Renault and Volkswagen are just a handful of the automakers that rely on the company’s innovations that Naderer has led.

To exemplify the benefits that can be realized from automating deburring and finishing operations in the automobile sector, Michael Haas, vice president at FerRobotics, delivered a presentation at a Global Automotive Lightweight Materials conference in early 2018 in Detroit. During the presentation, Haas laid out a handful of applications that would be of interest to the automakers that had gathered at the event.

In the case of roof joint grinding, Haas described a roof bonded with either laser brazing or laser welding where the weld seam must be ground for painting afterward. Where conventional automated systems left defects and an inconsistent surface finish, FerRobotics’ active sensitive kit (ASK) overcame those challenges while also removing the soot that results from grinding.

Unsurprisingly, the ground-off soot or dust that was previously left behind after grinding hundreds of cars created a health risk for employees and a painting challenge due
to the powder left on the car. In addition to the safety and aesthetic benefits of the ASK system, another advantage is a soft touchdown at the beginning and end of the automated grinding process, which goes hand in hand with the company’s sensitive force control technology.

Historically, [deburring and finishing] operations have been highly manual due to the sensitivities surrounding the amount of – or lack of – force that must be applied.

For the spot weld deburring/grinding application, Haas reminded conference attendees about the sharp edges that sometimes result from the spot welding process. Not only are the sharp edges a safety hazard for autoworkers but when they’re located on the doorframe of a car, they can be a potential risk for damaging airbags and door sealing.

With FerRobotics automated sanding tool, its active orbital kit (AOK), manufacturers experience repeatable surface finishes as well as reductions in abrasive use. A primary benefit of proper force control – where the exact amount of pressure can be applied to the surface – is longer abrasive life.

A primary benefit of proper force control – where the exact amount of pressure can be applied to the surface – is longer abrasive life.

The remaining applications presented at the automotive lightweighting conference focused on sanding and polishing operations, which also benefit from improved force control technologies. In particular, Haas honed in on surface sanding a car’s roof and doorframes as well as removing weld spatter in various areas, including around the door entrance, followed by final polishing and cleaning operations.

Starrett recently produced a video, putting the spotlight on its new line of hole saws.

As was true with the root joint and spot weld deburring operations, the sanding and polishing was highly repeatable, highly automated and resulted in lower abrasive consumption. In regard to the doorframes, weld spatter removal presented a challenge because of the sensitivity of the base coating.

During the presentation, Haas mentioned the importance of not over polishing or applying too much force while removing spatter, which the FerRobotics systems can be programmed to do. In fact, it can be programmed to “know” how to apply the exact force required. By applying a very specific amount of force, potential corrosion issues can also be minimized.

The ASK system is a complete robotic package that was specifically developed to enable post-production processes for welded seams, weld spatter and areas where powder deposit is common. Easily integrated into existing manufacturing lines, the robotic system boasts the ability to consistently deliver the correct amount of contact force for each application. It can offset surface tolerance levels up to 100 mm.

In regard to the AOK system, automakers are able to take advantage of an all-in-one industrial grinding and sanding solution. Process parameters can be regulated individually, including rotation speed, contact force and feed rate.

Clearly, when deburring and finishing operations are automated, automakers can inject the same benefits realized by other robotic operations – quality, capacity, flexibility and safety – across all aspects of their manufacturing.