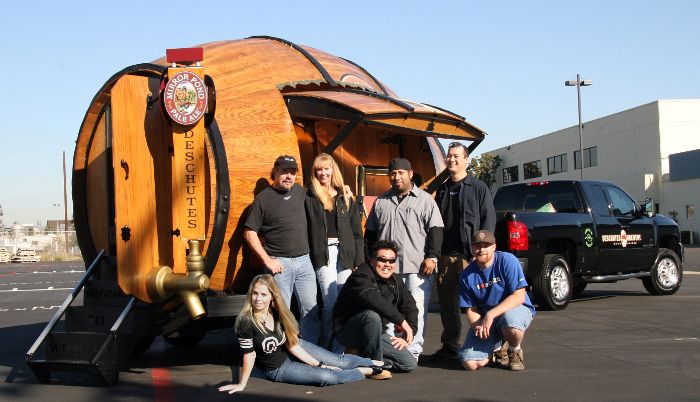 When I first started in business, I was constantly criticized for being “non-focused,” or as many called it “scattered.” After all, anyone can focus, but it takes a real open mind to broaden your horizons, or as I like to call it think big.

Our shop has run the gamut of products from cars built for Hollywood movies (over 200 cars built in two months for the movies Fast and Furious, and 2Fast 2Furious) as well as building decontamination pumps for the Navy Seals and even designing and building a swimming 14 ft. mechanical shark that was piloted by Fabian Cousteau the grandson of Jacque Cousteau. All of these projects were completed in the same shop and some at the same time.

If I focused on one thing such as fabricating movie cars, I would be out of business by now. The only thing that has kept me in business is that I am diversified, and can switch my business focus literally overnight to an unrelated project.

As an example, I once invented a pump and patented it. When it came time to produce a prototype, I had nothing but trouble from every machine shop that I contacted to build it. They all wanted to change it, and tell me how it should be built. Or they would try to convince me that it wouldn’t work. I finally got fed up with it and bought one of the machine shops I was working with.

You can see my focus to build my newly patented pump was put slightly out of focus through this, but it was only a bit of a diversion, and it helped pay the bills. Then a studio called and wanted a submarine built for a television commercial. I took this on as we were still prototyping my pump. We were doing such a good job on the aerospace work that we inherited when we bought the machine shop that the orders started to increase and, my wife, Renee, and I thought why not make this the focus of the shop. We would do the pump and studio work on the side.

Before we knew it, we were in the aerospace business and hardly had time to work on my pump, which was why we purchased the shop in the first place. But work is work, and I hated to turn it down. I didn’t care what we did. I was just happy to get work. Besides it was nice to finally focus on one thing. Then one day without any warning, the aerospace company closed down without as much as a day’s warning.

Most of the job shop owners in our area could be found at the local bars, drowning their sorrows as they planned for early retirement. But we just made a few calls and brought in more studio work and started production on my pump. The next morning I told our employees that the new job was my pumps, not aerospace. Thank God for our ability to branch out and change direction in a moment’s notice. It’s a survival skill that can save a business faster than the skill of being able to focus on one line of work.

I no longer get accused by anyone of not being focused, but instead praised for our ability to diversify. We’ll take on almost any job and turn it around as fast as possible. This is our secret to staying in business, as many companies would never consider doing anything that they haven’t done before. They have trouble adjusting to change. I really believe that in today’s world, if you diversify, you can provide your customers with a one stop shop.

Service is a word that is not used enough in business and a big part of service isn’t having to send your customer to five other shops to get their project completed. With a bit of diverse thinking, a part or product could be completed within your shop, making it more affordable for them and giving you a higher profit margin.

The biggest complement we get is when customers say that they like the idea that we do it all in one shop saving them a lot of running around. After all, many sub-assemblies aren’t that complicated. If you don’t have the expertise in one field, hire someone with the required skill. By doing this you’ve just widened your services to new customers.

As an example, we once built a large oak beer barrel that was 20 ft. long and 12 ft. tall for Deschutes Brewery, Bend, Ore. The oak beer barrel was to be a rolling bar, with a refrigerator to keep 10 kegs of beer cool. We also had to install a set of 14 beer taps along with lighting, a sound system and a generator to power it all. They asked me if I had ever built anything like this before and of course I hadn’t.

I don’t know of anyone who has ever built one, but we weren’t about to let that stop us. After it was completed, the brewery was satisfied with our product. The biggest downside to talking on different jobs is that you might need to expand your business, buy more tools and equipment, hire more help and eventually make a lot more trips to the bank to put all that extra money in. But after all, isn’t that what business is all about?

Eddie Paul was born in 1948 in San Francisco, Calif. and spent most of his life working on cars, planes, boats and submarines. With his fabrication talents, Jacques Cousteau snatched him up to be his personal inventor. Paul worked for about seven years fabricating specialized equipment for Cousteau. The Jacques Cousteau and Discovery Channel specials document some of Paul’s most notable work. He developed and manufactured specialized camera equipment used by the Cousteau’s along with other oceanographic research equipment including a swimming, mechanical great white shark.

He and his wife, Renee, own and operate five companies that produce products for the Department of Defense, Boeing, Rockwell Scientific, Mission Research, and many others.
Movie producers have come from great distances to make products with impossible deadlines, which he has done without fail. His secrets to produce these unique products are his tenacity, talent, knowledge and tools, along with the ability to use them all — and plenty of coffee.