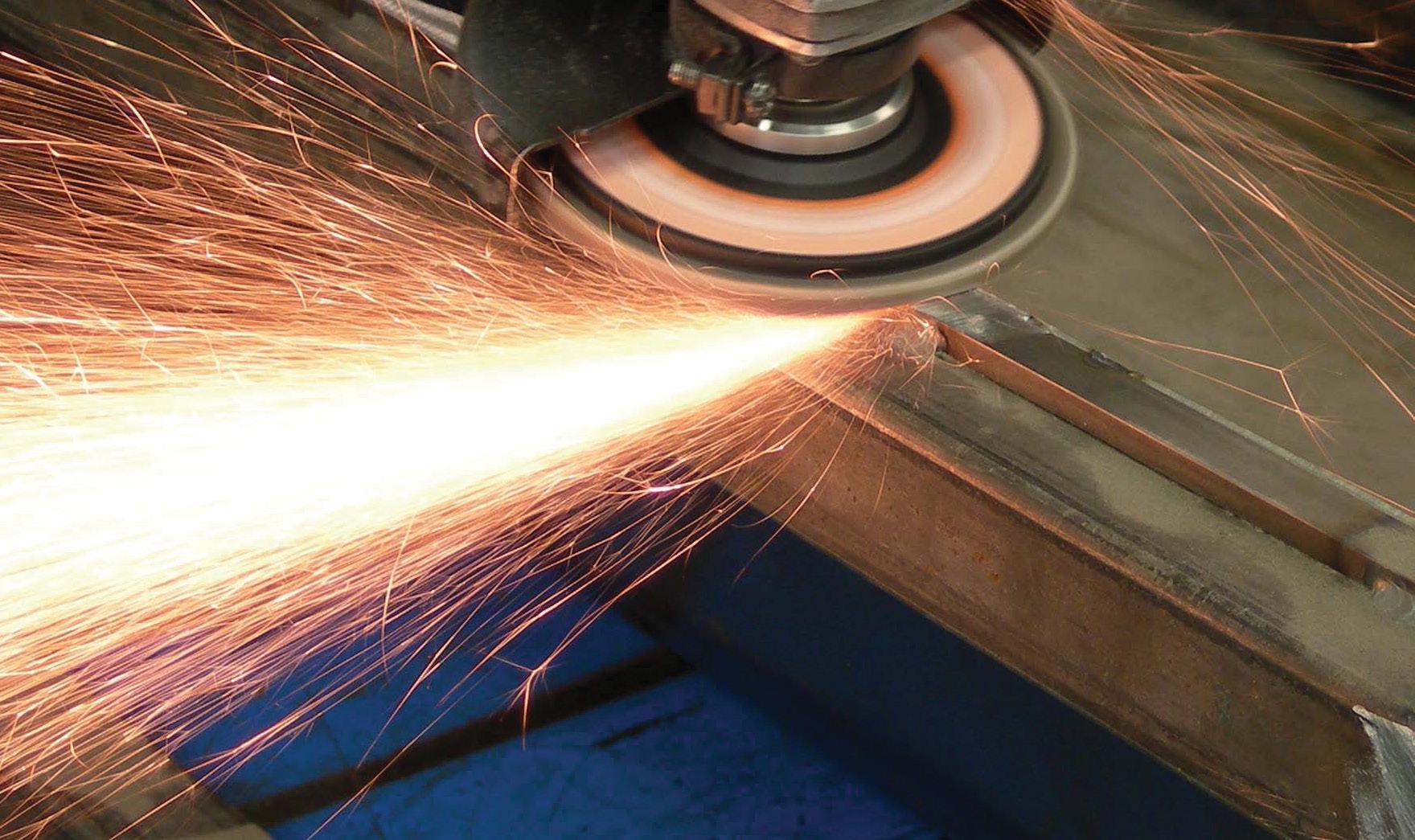 Flap discs allow the user to grind and finish with one product. This minimizes the number of products required to complete a job, eliminates the need for product changes and, ultimately, minimizes downtime.

Used almost exclusively on right-angle grinders, flaps can be applied at an angle or flat to the workpiece. Type 29 conical discs with angled flaps provide greater work surface contact for stock removal. Type 27 discs with flat flaps are used primarily on flat surfaces and are the best choice for light pressure applications, such as blending and finishing.

Flap discs with a trimmable backing plate allow the user to gradually remove the backing to preserve the desired flap overhang.

This allows additional versatility and the ability to fine tune the amount of flexibility in the flap for specific grinding and finishing applications, including hard-to-reach areas such as corners, irregular shapes and fillet grinding. A trimmable backing also provides flexibility at a variety of grinding angles.

“In my experience, there are two main reasons for an application to require a trimmable flap disc,” says Rick Hopkins, product manager
for welding and fabrication, Weiler Abrasives Group. “The applications are typically centered around a specific finish the user is trying to achieve or a tricky angle of approach or workpiece orientation.”

First, in most blending and finishing applications, the amount of flap that extends beyond the backing plate (the overhang) is critical. With no reinforcement, it is pliable and flexible, allowing the user to blend and “feather” to a desired finish. Taking advantage of this increased flexibility reduces pressure and makes blending easier with less risk of gouging or undercutting the workpiece.

When grinding on internal diameters of parts such as pipes, tanks and bearing seats, a trimmable flap disc allows the user to fully trim the back plate to the recommended minimum diameter, allowing the flaps to curl up and over the back plate and conform to the contour of the bevel or internal curve. This is also extremely effective for grinding fillets.

Ben Lampi, also a product manager at, notes that although trimmable backing plates are often referred to as plastic, the backing for trimmable flap discs is actually glass-filled nylon. It is important to understand the difference because plain plastic could shatter when trimmed.

“Just because a flap disc is advertised as having a plastic backing, that does not make it trimmable,” he says. Always check to be sure that a flap disc is marked “trimmable” before attempting to trim the back plate.

Plastic is more brittle, making it more susceptible to failure if trimmed. With glass-filled nylon, there is some pliability, allowing the discs to be trimmed without risk of failure. The nylon is softer allowing the material to just gradually shear rather than chip or break away.

The recommended maximum trim is 3/8 in. from the edge of the original backing plate on Weiler flap discs. “Every manufacturer has its own mark on its discs that tells you how far back you can safely trim the backing,” Lampi says.

Trimming an approved trimmable flap disc is safe and relatively easy, but it does require some practice and skill.

According to Hopkins, first, allow the flap disc to come up to speed. Then, slowly lift the disc so that the top of the flap (overhang) comes in contact with the sharp piece of scrap metal or sharp metal corner being used to do the trimming. Using moderate, controlled pressure, push directly into the corner of the metal. Apply the pressure in, not up to prevent damage to the flaps. If you continue to pull up on the disc while trying to trim the backing, you can damage or ultimately cut through the flaps.

“First-time users may question the safety of performing the process and can be reluctant to try it,” Hopkins notes. “However, it is a skill that is relatively easy to learn and becomes natural and almost automatic. With practice and proper care, trimming a flap disc is safely managed.”

The flap disc market is a mature market, with hundreds of manufacturers worldwide. Making an informed decision about the quality level and performance of available discs requires some understanding of the disc components and features.

Today, the most popular grain used is zirconia alumina. Zirconia alumina is sharper and more resistant to heat, providing faster, more aggressive cutting and increased durability. Although it is a bit more expensive than aluminum oxide, zirconia alumina’s increased performance and durability often provide a lower overall cost of use.

Ceramic alumina grains are designed to micro-fracture, maintaining their sharpness and high cut-rate for longer periods. Because it is the sharpest, hardest and most resistant to heat, ceramic is the best choice for exotic and hard-to-grind materials. But it is also the most expensive.

Deciding on a flap disc starts off with an understanding of the workpiece material, size, orientation and desired finish. With general carbon steel or mild steel, aluminum oxide and zirconia alumina are appropriate choices. Zirconia is also good on some harder metals without introducing as much cost increase as with ceramic.

When the material is harder to grind, such as stainless steel, armored steel, tool steel, titanium, Inconel, hard nickel alloys or even cast iron, choosing a ceramic alumina product often proves itself to have a lower overall cost of use.

Hopkins notes more and more users are willing to spend a high dollar amount on flap discs. “But something not everyone is aware of is that you have to use the correct tool with ceramic in order to take advantage of its ability to fracture and self-sharpen,” he says. “If you’re not using a high-speed, high-amp power tool that is capable of maintaining a high tool speed throughout the grinding processes, ceramic grain may not give you the best bang for your buck.”

“Just because a flap disc is advertised as having a plastic backing, that does not make it trimmable.”
Ben Lampi, product manager, Weiler Abrasives Group

The next factor to consider is the desired finish. “If the user is talking about the end finish requirements right out of the gate,” Hopkins says, “he needs to consider a disc that is more for finish specifications.” Trimmable flap discs provide a great deal of versatility in these types of applications.

Flap disc choice also depends on how much flexibility there is in the application. “You grind differently on a steel I beam used in industrial applications then you do a stainless steel work surface for a medical exam table,” Hopkins says.

Weiler’s ceramic flap discs have a coating that helps keep grinding temperatures cooler to protect parts from heat discoloration and prevent loading on softer alloys. Weiler flap discs are also contaminate-free, making them a good choice in any stainless steel application where oxidation and contamination is a concern.

“By adding flaps, you get a more pillowy effect where the disc is more conformable and can ‘float’ over irregular surfaces to grind,” Hopkins says. “High-density discs are a good choice for grinding on exterior surfaces of tubes, pipes and tanks.”

Weiler’s Tiger X flap discs also offer a dual flap construction. The benefit of dual flaps is that more than one kind of abrasive can be used on different flaps to achieve specific grinding characteristics.

All flap discs are a combination of abrasive flaps adhered to a rigid backing plate that provides stability. There are three different material types.

Phenolic or fiberglass offers high strength and is lightweight. Fiberglass backing is the most popular due to its lower cost and ability to be used in a variety of applications.

Glass-filled nylon backings provide a contaminate-free option and can be trimmed to suit the user’s need for a specific application.

Weiler remains one of the few that still offers aluminum backed flap discs, which are still demanded by the pipeline industry.

Deciding on a flap disc or changing to a different disc can be made easier by relying on the disc manufacturer’s expertise. “We want to understand what it is you’re doing and what your expectations are so we can recommend the best possible products to give you that,” Lampi says. “It is not just recommending the most expensive, highest performing disc, but matching the best product to the application.”