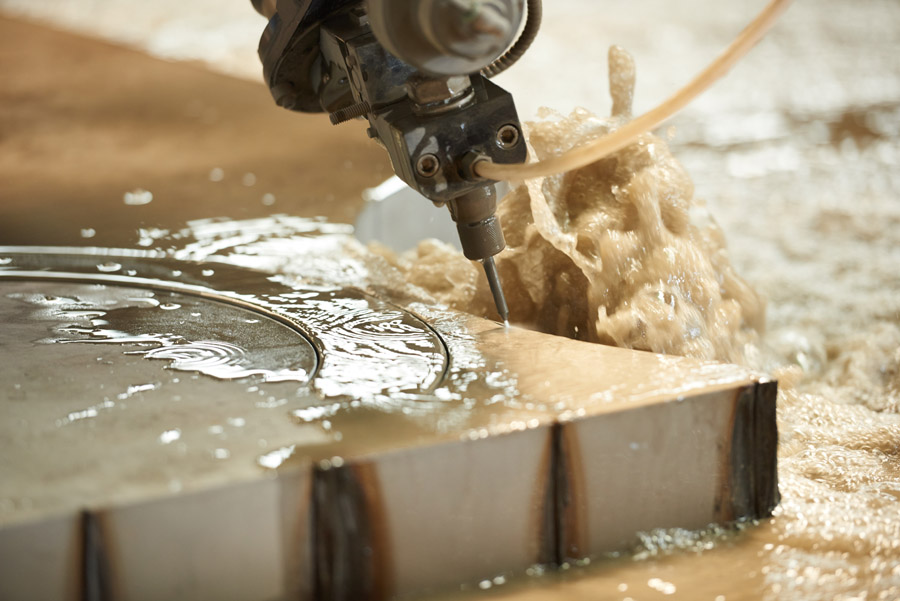 Editor’s Note – Fab Shop doesn’t publish a lot of case history stories, but Dan Chatterton’s enthusiasm for his five-axis machine, combined with his experience, convinced us that he has a perspective that you can’t get from a technical article. He’s solving customers’ problems – maybe like yours.

Beveling and chamfering thick plate is a primary task for the 5-axis machines.

Dan Chatterton,CEO of JACQUET Midwest, is one incredibly busy man these days.In just a few years, he’s grown his Racine, Wisconsin, metal service center into one of the largest suppliers of stainless steel and nickel alloys in the Midwest, making the subsidiary of JACQUET Mid Atlantic and JACQUET Metals one of the fastest growing shops in JACQUET’s system of five regional U.S. service centers.

This new waterjet is JACQUET Midwest’s third Jet Edge system and JACQUET’s 13th Jet Edge waterjet nationwide.It is being used to provide waterjet beveling and chamfering services to customers in the Midwest and nationwide through the company’s other service centers in Pottstown, Pennsylvania; Carson, California; Pineville, North Carolina; and Houston, Texas, as well as recently acquired Rolark Group subsidiaries in Edmonton, Toronto and Montreal. 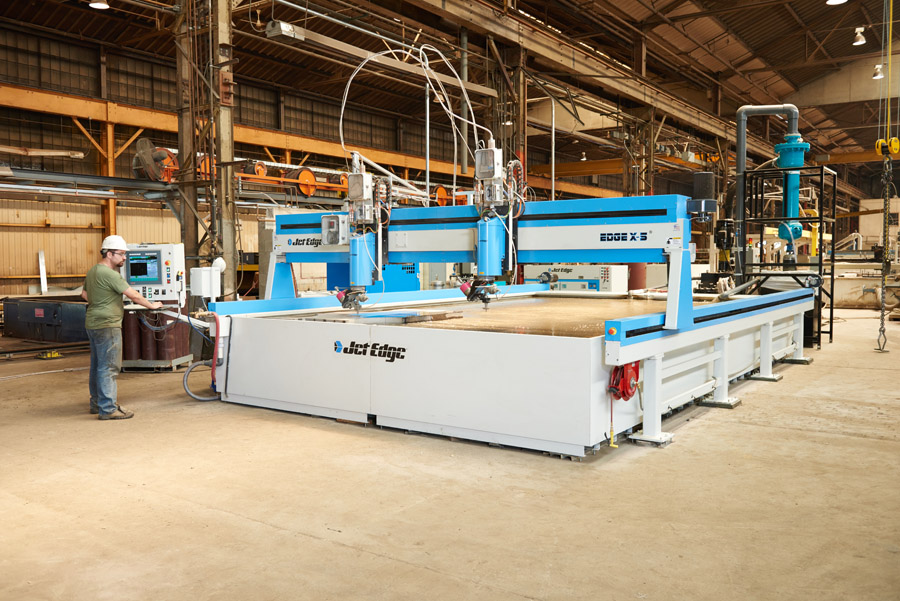 Chatterton noted that the company has equipped all of its service centers with large-format waterjet and plasma gantries to better serve its customers.The Racine location, which is strategically located between Chicago and Milwaukee, is the first JACQUET facility to add 5-axis waterjet cutting capabilities.

“All of the machines in our system are large-table machines because of the large plate sizes that we buy mill direct, allowing us to be more efficient with our cuts, have longer run cuts and have better nesting,” he said.

We caught up with Chatterton earlier this year when he was shooting a video promoting his new 5-axis waterjet, which at that time had yet to be installed.He knew his customers would be quick to take advantage of JACQUET’s new capabilities so he wanted to get a video in front of them posthaste. 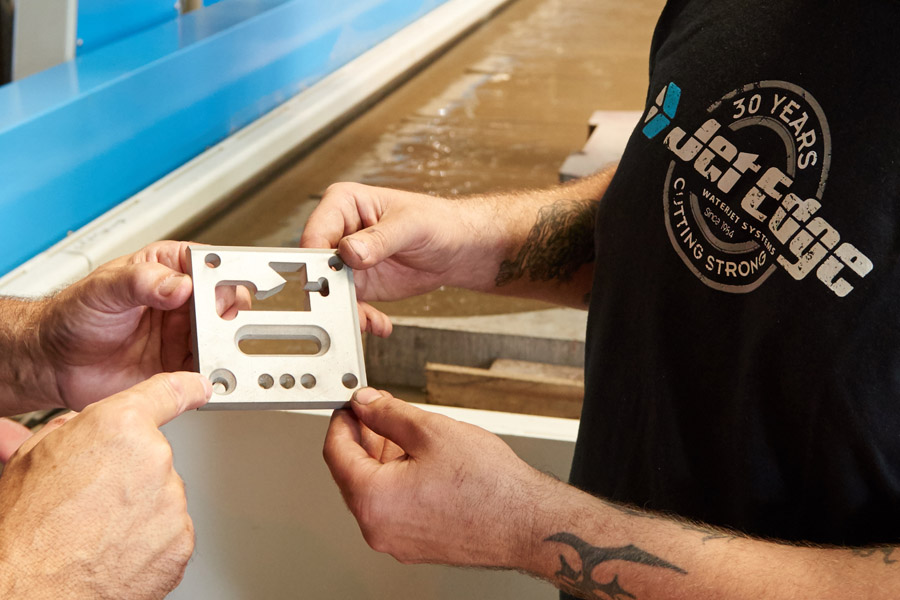 Chamfered holes are one of the capabilities that make 5 axes attractive to many customers.

Chatterton said his latest waterjet system has already allowed his company to be more deeply involved with its customer problem-solving and to meet the increasingly tighter tolerance requirements of its OEM, fabricator and machine shop customers, who support primarily the oil and gas, power generation, pollution-control systems and water-purification industries. Theyspecialize in stainless steel and nickel alloys, which they supply to customers in 19 different stocks, in a wide variety of sizes and thicknesses.

“For some time we had been telling our customers that we were considering getting this 5-axis machine,” he recalled.“They were very supportive in the concept of what we would possibly be able to do for them.

“We knew there were several areas of their business we could help them with, so once the machine was up and running in our shop it began to open up the opportunities we had always thought were there. We have been able to engage our customers more than ever because we have new capabilities that can help solve problems or bottlenecks that they have in their shops.”

Going from 3-axis to 5-axis and going there fast was certainly a learning curve for JACQUET’s waterjet operators, but the company took time to have their operators thoroughly trained, Chatterton noted.

“While we knew the capabilities of the machine going into it, it has caused us to stretch our thinking and push the limits of its capabilities through many applications we have come up against,” he said.“Our operators have had to have additional training both internally and through support of Jet Edge to achieve our level of success thus far.” 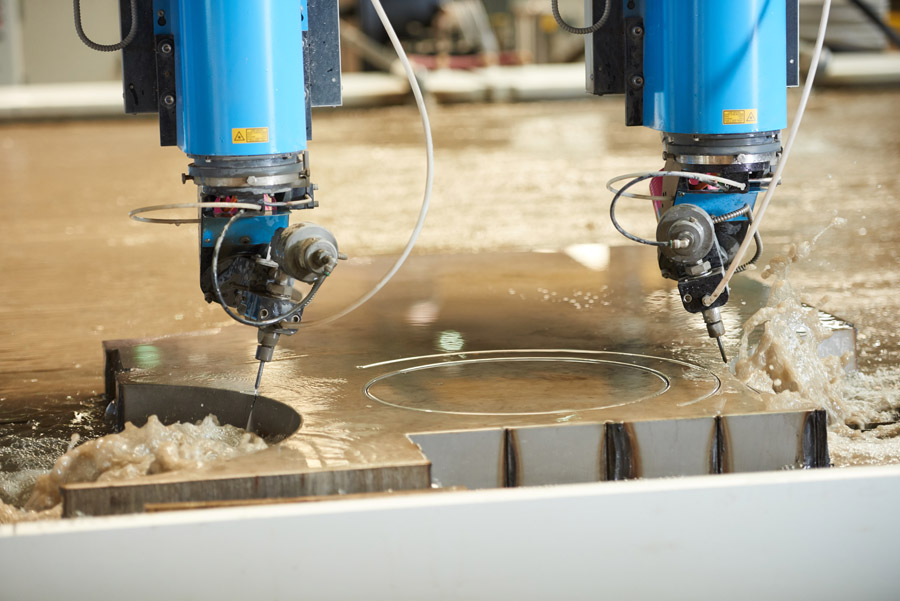 The company’s 5-axis waterjet system is capable of processing full 8 ft x 20 ft or 10 ft x 20 ft plates.Its dual 5-axis cutting heads double production and are capable of cutting precise 3D parts from virtually any material, including bevels up to 50 deg.Powered by a 60,000 psi 100 hp Jet Edge iP60-100 intensifier pump, the ballscrew-driven waterjet system has a repeatability of +/- .001 in.The system also has submerged or above-water cutting capabilities, as well as a proprietary plate-mapping feature that allows precise nozzle-to-plate standoff.

“Because of the taper control that the 5-axis offers, we are able to achieve tighter tolerance from top edge to bottom edge over our other waterjet machines,” Chatterton commented. “Most of the time we’re able to achieve .002 in -.003 in taper.”

These new capabilities have opened up new opportunities for JACQUET.

“We have begun to see more and more shaped cutouts that have contoured flights in them,” he observed.“These types of parts can be difficult and time consuming for machine shops to complete. With the dual 5-axis head we can cut two parts simultaneously, saving a lot of time and money for our customer.”

Chatterton had nothing but good things to say about his Jet Edge waterjet systems, which were manufactured close by in Minnesota, that friendly rival state across the Mississippi River.

“They’ve always had a great machine,” Chatterton said.“That is why we purchased 13 of their waterjets to date, with more to come, and JACQUET continues to grow and develop throughout the U.S. It sets us apart from our competition once again, expanding our capabilities and making us more than we were yesterday.”