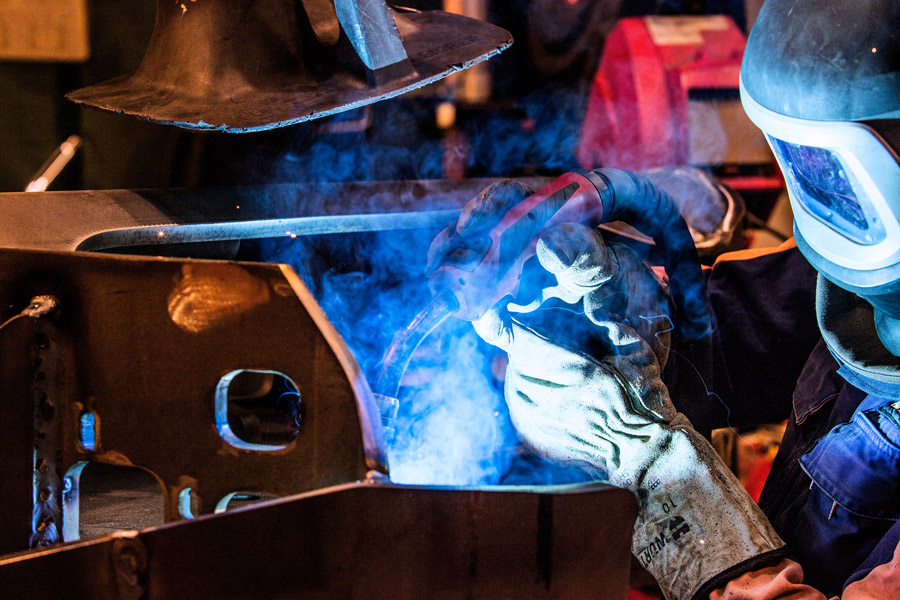 Single-minded and unstoppable, unaffected by ruts or steep slopes, the ScorpionKing advances on its prey. Then he attacks, dispatches his quarry and piles it carefully to be transported away. Just a few seconds later, there is barely any trace left of its former catch. The ScorpionKing leaves worthless debris behind on the ground and turns without delay to its next target.

This scene is replayed hundreds of times every day in forests around the globe. Yet it is no mythical beast pushing through the undergrowth: it is one of the world’s newest CTL (cut to length) timber harvesters.

Rarely is a name so appropriate – ScorpionKing. With its eight wheels and three oppositely rotating frame segments, as well as the crane boom, which projects beyond the cab supported on a two-arm column, this machine looks just like an oversized scorpion. However, Ponsse Plc is less concerned with an impressive appearance of the product and more about its tangible benefits for the machine operator.

Unlike excavators or other harvesters, the innovative design means that the crane column is not in front of the cab when in the operating position. As it is mounted on the same slewing ring as the cab, the driver always has a free view of the harvester and the saw unit that cuts down and strips the trunks before cutting them to length. This makes the driver’s work essentially easier and improves harvesting quality. It is easier to choose the trees to be removed, the machine doesn’t have to be moved from place to place for no reason, and remaining trees are not damaged.

“The weakest point of a harvester is most likely the boom,” says Heikki Selkälä, production development manager at Ponsse. “If there is a breakage, it will be there.”

That is why the company’s engineers have designed and exhaustively tested the C50 parallel crane with the greatest care so that it in no way threatens the reputation, built over years, of this premium manufacturer for long-lasting, reliable and efficient forestry machinery.

For this reason, Ponsse does not outsource production of the C50. The crane and all other particularly sensitive parts and core components of the harvester are made of high-strength steel with yield strength of 500 MPa. Welding is the essential factor.

A vehicle frame requires the company’s current workforce of 100 welders, supported by nine robot cells, to produce up to 100 weld seams totaling roughly 300 m in length. As welding must always take place in the optimal position, the workpieces frequently have to be rotated by a manipulator. This means that the welder regularly has to restart fresh, which leads to a high proportion of short weld seams.

Joining the C50 crane also involves extensive welding work, which is carried out by the combined strengths of people and robots. The two-arm column made of cast steel, for example, is welded to the crane boom by a robot. Because this is a critical component of the boom, each weld seam is tested with ultrasound.

In the past, these ultrasonic tests repeatedly revealed defects in the manual weld seams caused by a lack of fusion at the start of the weld, according to the company.

This wastes time and is a major cost factor, particularly because the frame requires many manually welded short weld seams, which means many weld starts, as well. Every defect means that the affected location must be ground out, re-welded and checked again.

“The reliability and quality of our machinery is a priority for our customers,” Selkälä says. “We cannot and we will not run risks, particularly in welding, and therefore we only use the best technology available.”

Kari Lehtomaa is the managing director of the Finnish Fronius representative Pronius Oy. He maintains close contact with customers in the region and makes sure he keeps abreast of their preferences and problems. He was, therefore, very optimistic that the new TPS/i would score highly at Ponsse. Ultimately, a particularly reliable weld start is one of the key features of this latest generation of power sources. In fact, the TPS/i was quickly welcomed by Selkälä’s team.

“Our primary aim was to improve the weld seam quality in our manual welding, which was achieved by switching to the TPS 500i,” he says. “We quickly realized that the new generation is really in a class of its own.”

However, the reliably deep penetration in all welding phases, including at the start of the weld, is only one benefit. Ponsse also reports significant improvements in the weld seam appearance following the introduction of the TPS/i in conjunction with the PMC (Pulse Multi Control) feature.

TPS/i has a very accurate arc regulation and, when combined with the arc length stabilizer, the arc length is precisely controlled, resulting in consistent droplet detachment and lower spatter emission.

Minimal spatter tendency and reliable penetration has allowed Ponsse to reduce the time spent on rework by a good 20 percent without any additional measures or training from Fronius. As the chief welding engineer says, “The system is so easy to use that we haven’t needed any significant support with the introduction of the TPS/i.”

The welders of Ponsse are also fans of the large touchscreen display of the TPS/i, which makes using the device even easier. The ergonomically designed surface with plain text display can be used easily with gloves, as well.

The number of machines purchased is testament to how much Ponsse values the new devices. In six months, the company bought and commissioned 63 machines from the TPS/i range for manual and robotic welding. Fronius has thus risen to become Ponsse’s preferred solution provider for welding technology.

Ponsse, which began back in 2007 when Ponsse purchased its first Fronius device. The power source from the TPS 9000 series has been working ever since in a robot cell for welding front frames.

It was soon followed by further devices. These included a TimeTwin tandem system for robotic welding of the heaviest components with sheet thicknesses of more than 30 mm, such as the rear frame components for the Bear, Ponsse’s biggest harvester.

“With the single-wire process used before the TimeTwin system, each workpiece took seven hours to weld. Now it’s less than three,”Selkälä says of the high-performance welding system, which had proven its worth within the first hour.

After the arrival of another manual welding device from the TransSteel series, those responsible at Ponsse embarked upon the collection and analysis of detailed figures about the reliability of the Fronius devices and the costs of consumables in preparation for future investment decision-making. The figures were all very positive. Machine breakdowns are extremely rare and gas nozzle consumption, for instance, fell by almost 100 percent compared to predecessor machines from a different big-name manufacturer.

Similarly positive was the trend with contact tips. Before changing to Fronius devices, the welders at Ponsse had to replace the contact tips up to 30 times a day due to ignition problems. Now they last up to a week or more.

In the future, Ponsse intends to look more closely at the status of welding systems and processes. It will use the status and weld seam information it collects to carry out ongoing monitoring, analysis and documentation of its welding processes. With the help of a central server unit (WeldCube), it will also soon be possible to collate and manage the data from several power sources from throughout the company.

“These kinds of innovations drive us forward,” Selkälä says. “We see many similarities in the company cultures of Fronius and Ponsse and not just in a shared passion for innovation. Both companies are wholly committed to customer care, the quality of their products and the will to remain at the forefront.”