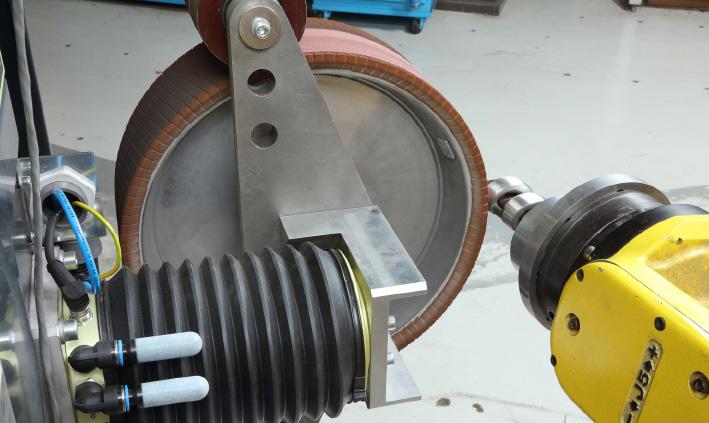 Integrating automation into any industry brings challenges. For the metal fabrication and finishing fields, automating an application like deburring has its own unique set of considerations.

Deburring is not an application that always looks and functions the same. It’s ambiguous, nuanced and often perceived as requiring the human touch of an operator. Sometimes, deburring is conducted on hulking objects like a ship hull while other situations call for the deburring of small parts such as orthopedic implants or turbine blades.

At its most basic function, a robot is designed simply to reach a point in space. At 3M Abrasive Systems, we see this in factory automation where repetitive motions, such as placing an object on a fixed-speed belt, are performed by a robot arm that pivots and repeatedly bends over. It moves objects based on predetermined coordinates, throughout a generally static process.

The challenges that come with integrating robots for applications like deburring include an abrasive’s tendency to wear down and change in size and performance over time. Robots that have highly fixed, programmatic movements can’t adjust to the wear of the abrasive – and, in most cases, robots cannot understand pressure or contact like operators who are trained to “feel” the job and adjust force as they go.

Robotic integrators, however, are able to add devices with force control and feedback to robotic cells that are designed to compensate for these sensory shortcomings. So,
the challenges facing automated deburring are not unsolvable.

When setting up robotic controls for a material removal abrasive process, 3M examined several factors, including pressure. Ultimately, the findings showed that the key to successful robotic deburring is to design robots with the ability to change their pressure throughout – because controlled force yields consistent results.

Whether a fabricator or manufacturer has made the automation migration or is still just considering robotics, there are other variables that should be considered in addition to force control devices. These include equipment speed, product characteristics and part consistency.

3M recommends investing in equipment that allows users to alter speed throughout the life of an abrasive. This is particularly important when using abrasive wheels, which change diameter with use. As a convolute deburring wheel decreases in size, for example, its surface speed (feet per minute or meters per second) and cut rate also decrease. Variable speed allows users to increase the RPM of a wheel and maintain performance even as the wheel diameter changes.

To optimize wheel efficiency and performance, it’s important to measure the abrasive wheel diameter and deliver feedback to the speed controller. This can be done by measuring the wheel with a sensor or by observing the robot’s position to calculate wheel size and adjust the RPM accordingly. By improving speed and consistency, users also boost productivity and minimize downtime.

When using abrasive belts, it’s important to consider mineral type, abrasive grade and belt length to determine the best product performance and life. Simply, a longer belt means more material and longer life. The mineral type of the abrasive, such as ceramic versus aluminum oxide or silicon carbide, can also affect cut performance and abrasive life. Finally, the abrasive grade (mineral size) can play into how quickly the work is done. Completing the job with the most aggressive mineral that meets the finish requirements generally provides the best speed and life.

The challenges that come with integrating robots for applications like deburring include an abrasive’s tendency to wear down and change in size and performance over time.

In addition to the abrasive, another source of variability is the part itself. A good candidate for robotic finishing is a very consistent part in terms of burr size and shape. If a part has variability, it can be difficult for a robot to determine when the part has been successfully completed.

A vision system can be installed on the cell and used to measure, inspect and customize the robotic program, but this adds complexity, increases cycle time and raises cost. Ideally, the parts coming in will be the same every time, so the process can be characterized and cycle times remain constant and consistent.

Despite the variations robotic deburring presents, the results must remain consistent. At the 3M Customer Abrasive Methods Center, extensive experimentation with various cells has been conducted to determine the challenges and solutions for advancing robotic deburring. The company also helps integrators by working alongside them to ensure the automation setup process goes seamlessly.