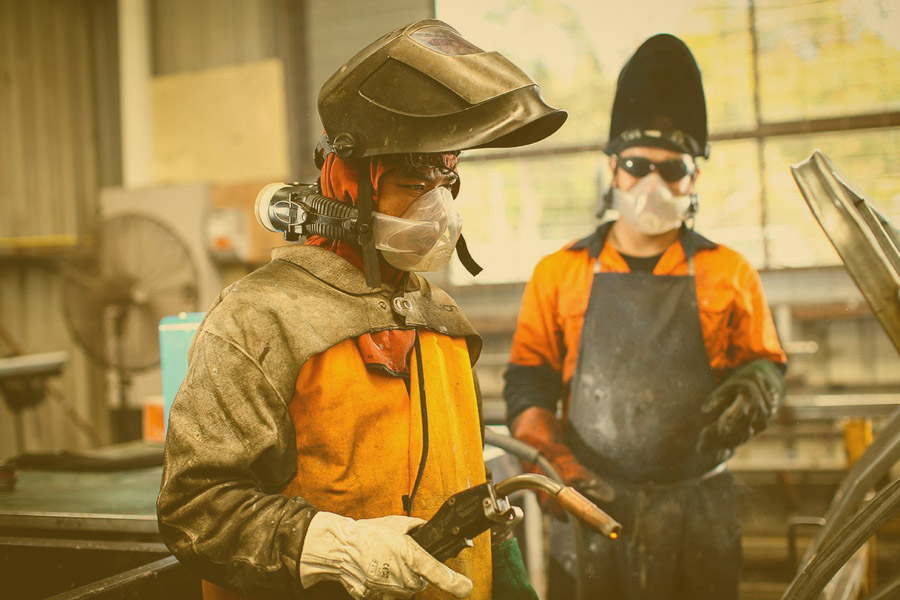 If a welder has been in the industry long enough or works with welders who have been in the industry for decades, he knows there is a side effect of being around welding fumes all day. Recently, the International Agency for Research on Cancer (IARC), an agency of the World Health Organization (WHO), reclassified welding fumes and ultraviolet radiation as a Group 1 carcinogen, which puts it in the same group as asbestos. Previously, it had been classified as a potential carcinogen.

However, according to a report published in a journal called The Lancet Oncology, “substantial new evidence has since accumulated from observational and experimental studies. In the present evaluation, welding fumes and UV radiation from welding were classified as ‘carcinogenic to humans’ (Group 1).” 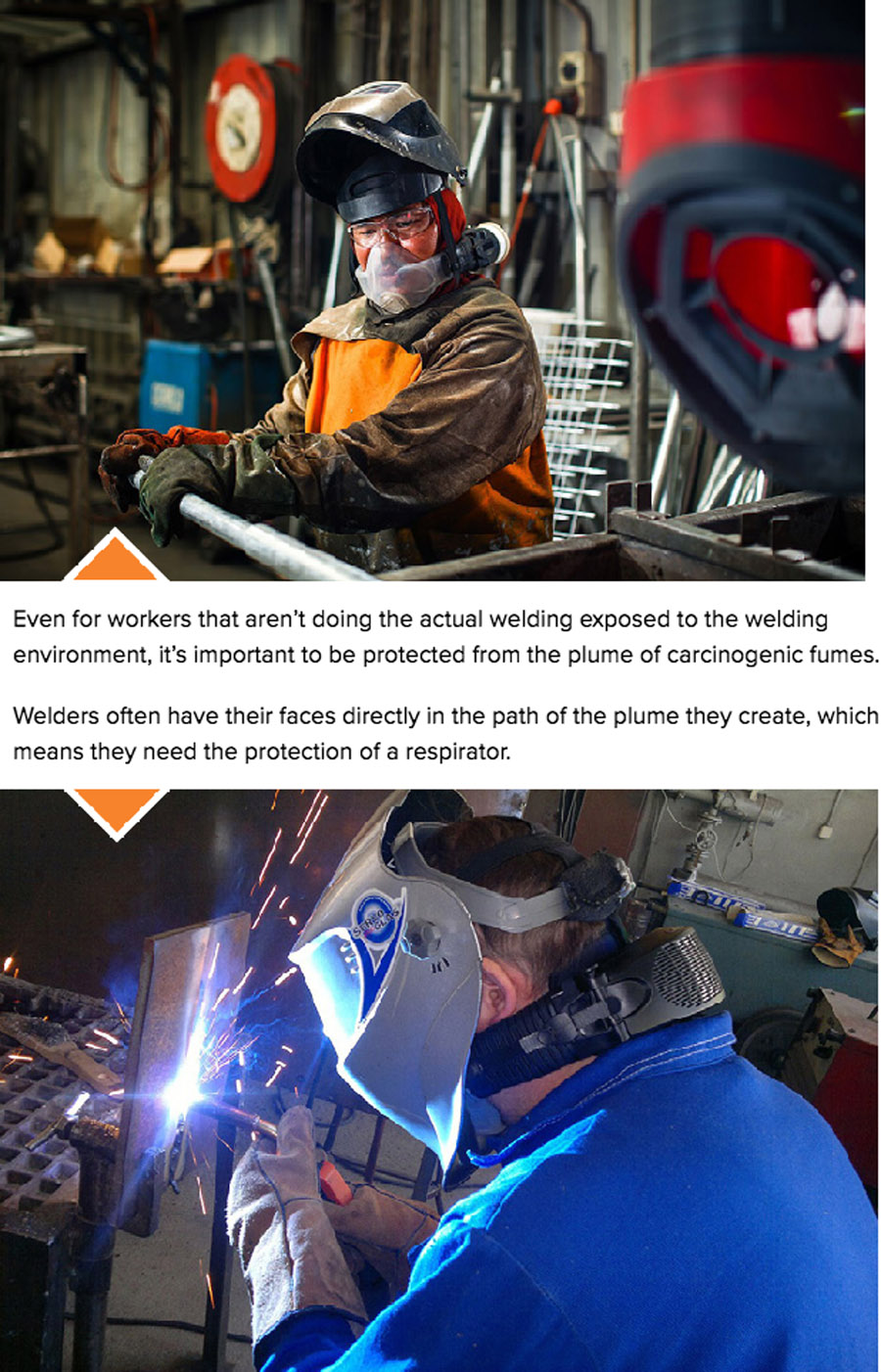 WHO says lead, mercury and solvents such as toluene, xylene, styrene, and pentane, among others, are present in workplaces in several occupations, including welding. These toxins can cause toxic encephalopathy, a neurologic disorder that can cause memory loss, personality changes, increased irritability, difficulty concentrating and several other problems, including seizures.

However, Birrell says the most common health issues welders come up against are concentrated in the lungs. The welding process results in plumes of incredibly fine particles entering the air, and many of those particles are metal. They get deep down into the lung tissues and into the small bronchioles.

“The body is very good at getting rid of big, course particles,” she notes, “but it’s challenged when filtering really fine ones, particularly in high concentrations. They bypass the body’s own defenses that filter out dust.”

The IARC notes that through 30 occupational or population-based cohort studies examined, there is an increased risk of lung cancer in welders or other workers exposed to welding fumes. The metals welders are exposed to include chromium, nickel and manganese.

According to the report in The Lancet Oncology, “strong evidence suggests that welding fumes induce chronic inflammation and are immunosuppressive. Lung and systemic inflammation biomarkers were increased in many panel studies of various arc welding fumes.”

Welders require mobility and portability. They don’t want anything restricting them from getting in the right position to lay down a solid weld. Part of that is the high-tech visor they choose to protect their eyes and face. Throwing a bulky respirator into the mix is not an ideal circumstance.

Birrell says that aside from her company and few others, good respiratory protection solutions for welders aren’t available on the market, which can make the process of protecting oneself difficult.

“Welders rightly invest a lot into that visor to protect their eyes,” Birrell notes. “For them to replace it with a more comprehensive system that incorporates respiratory flow, that’s not easy for them to do. They may not be able to afford that.”

Furthermore, a bulky respirator impinges on their ability to maintain a high-exertion, high-effort work pace. When using a disposable mask, their breathing can be restricted, which can result in them having to frequently stop what they’re doing to get a breath of fresh air.

“Welders typically are hard working guys who just want to get the job done,” she says. “Sometimes they put their health at risk to finish the job. That shouldn’t be the case – they need a respirator that actually works for welders so they can focus on the job.”

Following the IARC’s reclassification, CleanSpace established the Welding Respiratory Safety Resource Center. This online education resource provides information about the respiratory hazards associated with welding and what welders need in terms of respiratory protection, including tips on choosing the best respirator equipment. 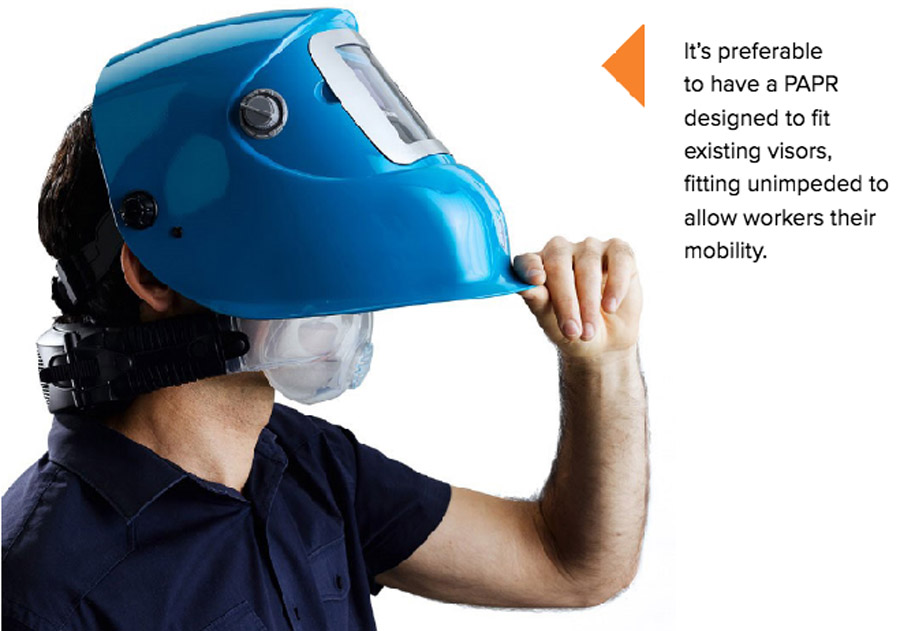 “Welders are really on board with tech and safety,” Birrell says. “I just don’t think they’ve had a lot of accessible information, particularly as recently as the reclassification of the welding fumes. Many of them suspect that the welding fumes aren’t so good, as their head is right in the middle of the welding plume.”

Cleanspace’s resource center offers comprehensive research data from WHO and IARC, and the company plans to have educational videos up soon, as well.

“We want to build on the dialogue in the industry,” Birrell says. “We’re seeing a heightened level of awareness and more practical steps to protect these workers.”

Now that the IARC has reclassified welding fumes as a known Group 1 carcinogen, more contractors and fabrication businesses will look into how they can protect their workers.

Not only are disposable respirators uncomfortable, they don’t effectively block out all the fumes created while welding due to the poor seal on the face. However, a positive air pressure respirator (PAPR) is beneficial for workers in the welding environment.

The PAPR creates an effective positive pressure in the mask, and if the mask has a temporary break in the seal with the face, the positive airflow out of the mask prevents fumes from entering the airway. It’s a unit that can be worn under a visor without impeding mobility, and the technology makes breathing easy and comfortable.

For a welder or people working around welding fumes to effectively protect themselves, the resource center recommends a PAPR that can provide the following features:

The technology behind the CleanSpace PAPRs was originally developed by ResMed Inc., a medical device manufacturer of continuous positive air pressure machines for people who suffer from sleep apnea. Based on its heritage, it is a natural fit for CleanSpace to be an authority in the PAPR market.

So far, users of the CleanSpace PAPR say it is a low-profile device, which makes it an easy fit under welding visors. It’s also lighter and less bulky than traditional masks. With no belts or hoses, welders are able to move around quite easily and not worry about getting caught on other equipment. Wearers say the PAPR is easy to breath in and they have less fatigue than they experience with disposable masks. 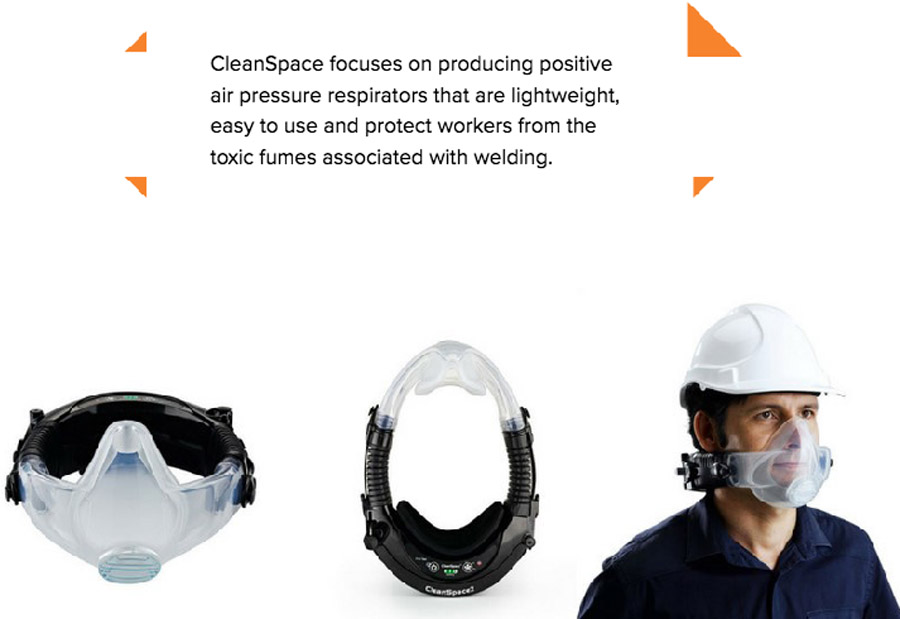 The CleanSpace PAPR is designed so there is no heat or moisture buildup, which means users are less inclined to pull it down. Furthermore, they can talk through it, which is a problem with other respirators. Communication is also made easier because when the visor isn’t pulled down, people can see the user’s lips moving as well as facial expressions.

CleanSpace respirators come with a power unit, which is positioned on the back of the neck, a HEPA particulate filer, filter adaptor, half mask in three sizes, storage and cleaning plug set, backpack and disposable cover for the power unit.