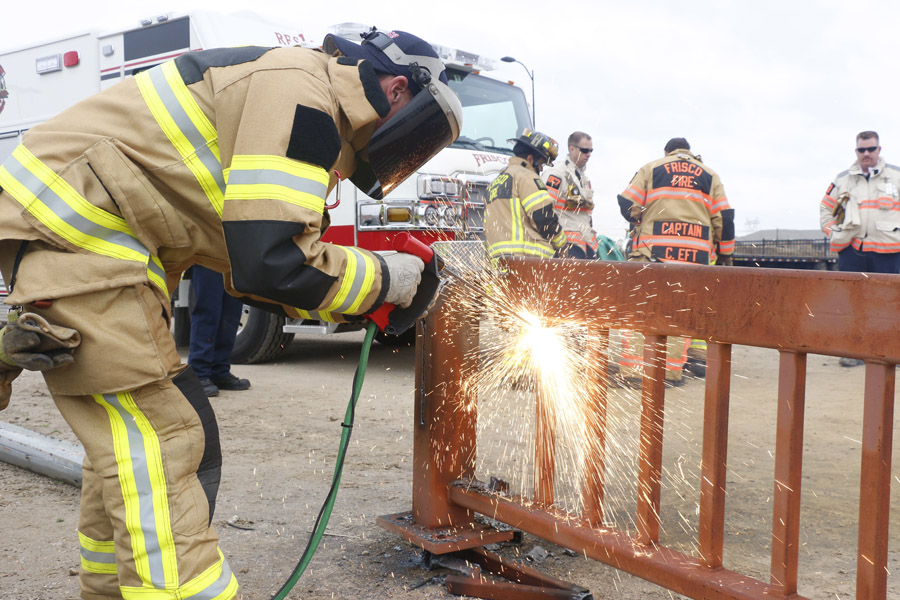 Located 45 min. north of Dallas, Frisco is one of the fastest growing towns in America. Named the No. 1 place to live in 2018 by Money Magazine, Frisco’s population has boomed from 6,141 in 1990 to nearly 180,000 today. To put it lightly, the area’s unprecedented growth is producing a lot of work for locals, including Frisco’s fire department.

“We cover approximately 71 square miles,” says Ryan Hutt, the fire department’s battalion chief special operations/health and safety. “With the construction going on in the area, we’re putting quite a few permits through the fire prevention office every month. Our call volume is increasing about 10 percent every year. We have to adapt to the different types of building construction that are coming into the city – a whole lot of high rises, parking garages and lightweight construction – so we wanted to look into different options.”

One of those options is the Arcair Slice Complete Pack exothermic cutting system, which is located on the city’s heavy rescue unit, Rescue One, which responds to all major incidents, including structure fires, collapses and technical rescue incidents.

Exothermic cutting complements Rescue One’s other forced entry and extraction tools by offering the ability to cut or pierce virtually any metallic, non-metallic or composite material, including steel, aluminum, concrete and firebrick. Exothermic cutting uses a stream of pure oxygen and consumable steel rods to create a flame between 8,000 and 10,000 degrees F.

“The exothermic cutter is a different tool in the toolbox,” says ESAB’s Jeff Henderson, Arcair brand manager, who has decades of experience with the technology. “First responder vehicles have rescue saws and oxy-acetylene torches, but the exothermic cutting meets the needs of different applications, so it’s a great addition.”

The preparation, maintenance and operating principles of the Slice system are relatively easy to learn, so Hutt organized a half-day training session for the Rescue One crews. He selected an area behind the Frisco Public Works facility that temporarily houses damaged and worn infrastructure items, such as hand rails, guard rails, light posts, traffic signs and concrete.

“We just never know what we’re going to encounter,” Hutt says. “Connecting with our Public Works facility enabled us to practice on a lot of different real-world situations.”

Arcair introduced its first exothermic cutting products in 1985. Designed for structural construction, demolition, and construction and mining equipment repair, these systems organize components on a dolly that holds a larger size (280-plus cu. ft.) oxygen cylinder for longer cutting time.

While exothermic cutting has been available for decades, it’s not as well known in the fire and rescue industry as other cutting processes. Thus, before describing recent updates to the Slice Complete Pack system, a review of exothermic cutting system operation is in order.

The exothermic process cuts an order of magnitude faster than other flame cutting processes, including oxy-acetylene, oxy-propane and liquid fuel.

A spark from a battery-powered striker ignites the oxygen, which then uses the rod as fuel, completing the fire triangle. Once initiated, the flame becomes self-sustaining and does not require a continuous source of electricity (as does a plasma arc, for example). 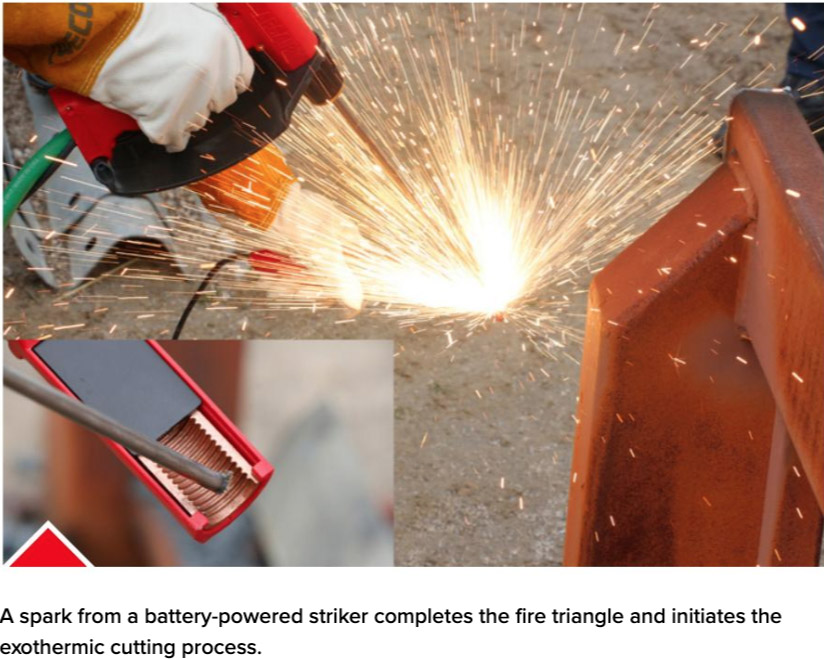 The most unique component of its fire triangle is the fuel source: a hollow steel rod folded from a flat strip of steel in a highly engineered manner that maximizes the surface area to oxygen ratio. Rods are 22 in. or 36 in. long and 1/4 or 3/8 in. in diameter. Shorter rods burn for about 45 sec. and longer rods for about 75 sec.; larger diameter rods last a bit longer and remove more metal.

Standard industrial-grade oxygen flowing at 80 psi supports the exothermic reaction and helps remove the molten metal. Applications such as cutting material thicker than 3 in. may require higher operating pressures while operating pressures as low as 40 psi can “wash” off rivet heads and scarf out small cracks for repair.

As an example of cutting capacity, a skilled operator can cut through a railroad rail in about 75 sec. using a 36-in.-long, 3/8-in.-dia. rod or two smaller rods. Such capacity can be sufficient to cut through a lock, steel door or door frame and pierce the adjacent cinderblock or at least weaken it to the point where a battering ram would be sufficient for gaining entry.

A pistol-grip style torch serves multiple functions, including controlling oxygen flow to the rod, conveying electrical current and securing the rod. The updated Slice system now features a more comfortable grip and a better connection between the grip and the rubber shield that protects the operator’s hand from molten spray when piercing. Both benefit operators when training.

The updates also include an improved battery ignition source that enables faster recharging of a dead battery, and incorporates an over-charging safeguard and three LEDs for a better visual indication of battery condition. To extend striker life, a new striker assembly incorporates a slide mechanism that enables the operator to expose the copper ignition bar in small increments, shielding the fresh portion. The torch comes “pre-wired,” so connecting the gas hose to the regulator and plugging in the torch and striker electrical connections to the battery are routine.

In terms of best practices, set oxygen flow to 80 psi. After inserting a rod into the pistol grip’s retaining collet nut, tighten the collet and then tap the end of the rod against a hard surface; this firmly seats the rod against an elastomer seal inside the torch to prevent gas leaks.

Operators should always point the end of the rod in a safe direction and then, with their offhand, scratch the striker against the rod. From there, it’s best to hold the striker in position for a fraction of a second while it sparks, then simply drop the striker as the flame ignites. As with oxyfuel or plasma cutting, operators learn to gauge proper technique through experience. For successful cutting:

Piercing causes more splashback as the molten material has nowhere else to go except out the entry hole. As a result, operators need to take additional safety precautions. Instead of safety glasses or goggles, they need a face shield or welding helmet with shades appropriate for cutting. Any exothermic cutting operation requires head-to-toe protective clothing, and ear protection is recommended.

Operators can further remove themselves from possible splashback by holding the torch at arm’s length as well as by bending the cutting rod, which allows them to stand off to the side (rods can bend up to 90 degrees without affecting oxygen flow).

After igniting the rod, best results are achieved by keeping it perpendicular to the workpiece while piercing. Operators should also slowly push in the cutting rod, applying consistent pressure. For thicker material sections, wiggling the torch slightly may help, and a quick twist may be necessary if the molten material and/or slag solidifies and causes the rod to stick. For the same reason, removing the cutting rod from the hole before releasing the oxygen lever will help prevent the cutting rod from getting stuck.

Overall, the Frisco Fire Department sees the Slice exothermic cutting system as having a real impact. “We were able to make really quick cuts through some pretty thick steel and guardrails, plus we were able to punch through concrete,” says Stephen Hyatt, a firefighter paramedic with the Frisco department. “This could be pretty important for us if we have vehicle accidents or entrapments.”