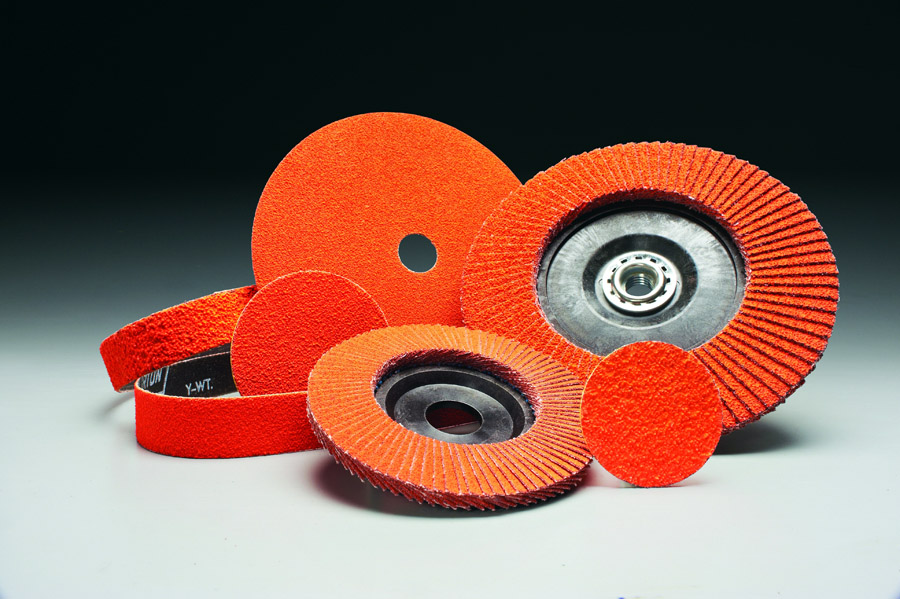 Finishing welds in stainless steel is a labor hog and it requires skill to do the job efficiently and consistently. It typically involves starting with an ugly weld and making it beautiful. The high-volume and most demanding applications are in appliances, food processing equipment, aerospace, medical and pharmaceutical processing. All of them require at least a finely-brushed appearance as a final step, and they don’t tolerate scratches.

All of which requires progressively finer abrasives in a multi-step finishing process. Reducing the time and skill are the primary targets for improvement by the abrasives suppliers, such as Norton.

Those targets are straightforward and there are only a handful of them:

* Reduce the number of steps

* Reduce the abrasive costs per part

* Reduce scrap by making the process easier and more reliable

The Norton’s Blaze-grain ceramic grit is elongated, and both harder and sharper than conventional alumina grit on the right.

Patrick Carroll andMike Radaelli, Sr., Product Managers with Norton|Saint-Gobain, explain how the company addresses the issue of reducing steps. “Starting with a finer grit gets it off to a good start,” Carroll says.

To get good stock removal rates with traditional abrasives, such as aluminum oxide, operators would start with 36 grit, or even 24. These leave deep scratches that make the following steps slower, and often end up adding steps. Norton today recommends 60 grit, or even 80 grit. Cutting rates are so much faster with recent grit materials and abrasive discs that you can use the finer grits and get good cutting rates, and avoid those deep scratches.

“Aluminum oxide is a great, all-purpose product,” says Carroll, “but the downside is that the blocky grains generate heat. Heat is bad. Twenty years ago, many of our good customers in stainless steel grinding were using aluminum oxide, and they were generating a lot of heat at the point of contact.”

“Zirconia is a better tier product for grinding stainless. Many of our customers moved up the food chain to zirconia when it became available. You’ll recognize it because it’s produced primarily with a blue color in the industry. With zirconia, each piece of abrasive grain is shaped like an open hand. It’s sharp. As you use it, each piece of grain micro-fractures. As it fractures, instead of having all five fingers up, you have four fingers up, then three fingers up, and then two fingers up. But with zirconia, you still have a sharp cutting point.” You get faster cutting with less heat.

But abrasive technology has moved on. Norton’s Blaze ceramic is made up of elongated, sharper grains. You can see the difference in the photo. They’re both harder and sharper than the older types. It’s the Blaze-grain technology on which the company has based its streamlined, three-step recommendations for finishing stainless.

As abrasive grit has advanced, the substrates and the binders have kept pace. There are four basic configurations in Norton’s lineup: flat discs, fiber discs, non-woven wheels and belts.

The conventional fiber discs cut fast. With the Blaze abrasive, they’re the quickest approach for the first step, which they call “take down.” They leave a random scratch pattern and they require skill to avoid gouges.

Flap discs have become popular because they’re long-lasting and are less likely to gouge. These, too, are recommended by Norton for the first take-down step.

From here, the best products become application-specific. Flat welds may be better handled with abrasive belts, which the company recommends where the workpiece configuration allows. The scratches are unidirectional and generally require less work in the next step to remove them.

The second step, which they label “reduce and set scratch pattern,” likewise becomes application-specific. The Blaze belts may be the right product, but this is where non-woven wheels can come into play, as well. They do a good job of blending and they hold their shape. Special “rapid-blend” versions are recommended for corner welds and grind lines. The usual recommendation for grit size is 120.

Some applications require even finer finishes, so there may be a Step 4. Step 4 is typically finished with a non-woven file belt or a non-woven belt on an expandable drum. This task can be completed with aluminum oxide mineral or the new Clean Bond Vortex Rapid Prep product. The advantage of this technology is that the Clean Bond resin prevents smearing. And the Vortex mineral increases cut rate and extends product life up to two times as long, says Radaelli. 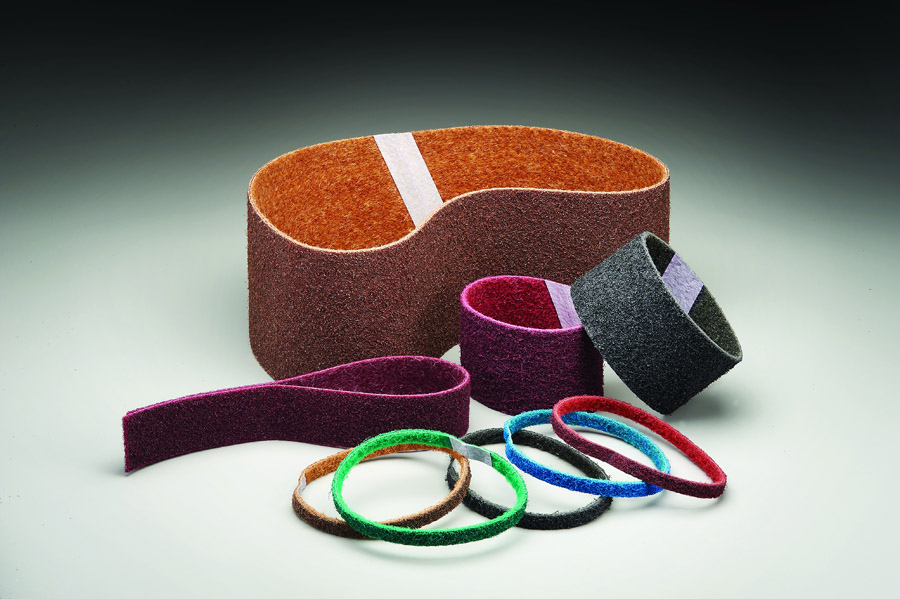 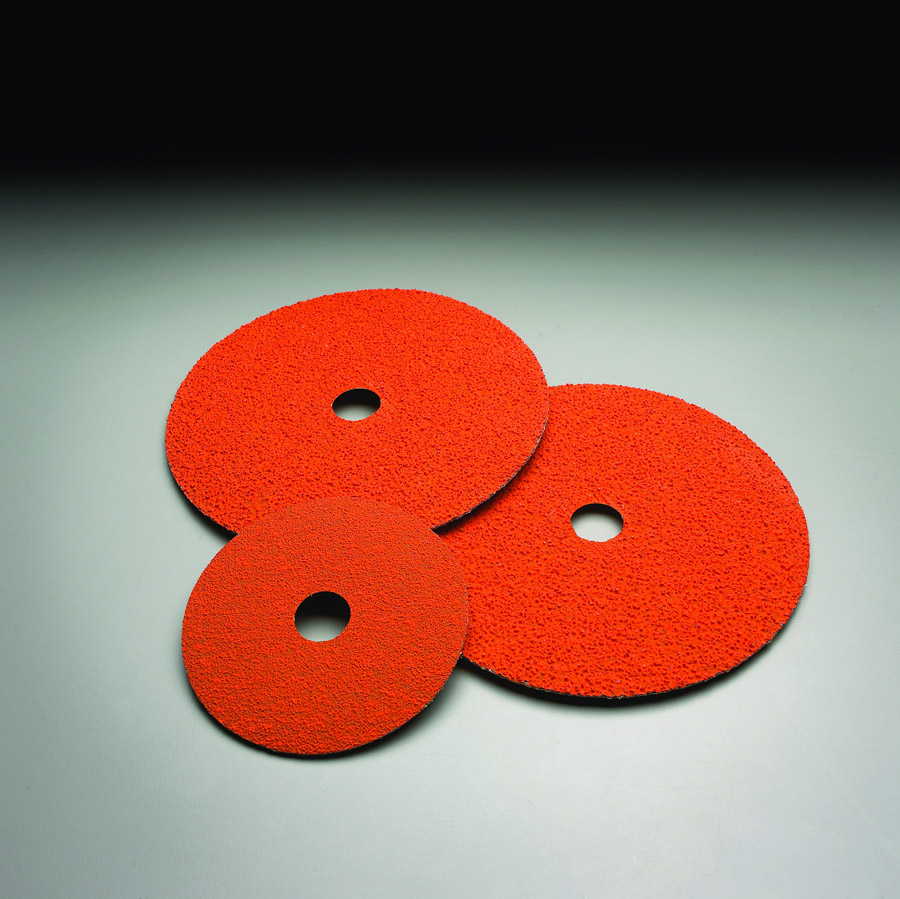 If you like having choices, you’ll love the product lineups from major abrasive manufacturers. The Norton line of belts, discs, and non-woven products are made to deal with specific combinations of application demands. You’ll want their expert advice in selecting them, as well as a catalog.

Typical stainless grinding applications end up with a brushed-like finish, known as a #4 finish. This is where belts are preferred because of their scratch pattern, but some applications are better handled with convolute wheels. For even finer finishes, belts and convolute wheels are available in fine grits, to take the degree of finish to the next step.

Norton has an enormous number of products, as do other leading abrasive manufacturers, and it’s a challenge to reduce the recommendations to a simple cookbook of systematized choices. But they’ve taken a big step in that direction with a system outlined in their “Stainless Steel Finishing By the Numbers” brochure, which is available as a PDF, here. It details more specific products and sizes, but it’s basically the system outlined above.

Beyond the abrasives themselves, Norton has a lot more advice and help to offer. One issue they’ve addressed is the need for tools that can be handled by smaller women in the workplace, and lighter tools that avoid carpel tunnel syndrome. At the same time, they’re focused on the need for abrasives and grinding tools that are suitable for employees with less training. They still have to cut aggressively, while at the same time being more resistant to gouging and other destructive mistakes.

Belts, flap wheels, and non-woven products all help in those directions. So do smaller abrasive products and smaller, lighter tools. Norton has partnered with a company to develop tools and abrasives in tandem to meet these needs. Several of the abrasive belts and discs are offered in “mini” versions that work with smaller tools.

The variety of applications and abrasive products is so vast that the proper combinations probably will never be completely systematized, but there have been some big steps in that direction. Start with the brochure mentioned above and then talk to the experts. If you haven’t changed your abrasive materials or processes for a while, you’re likely in for a good surprise.