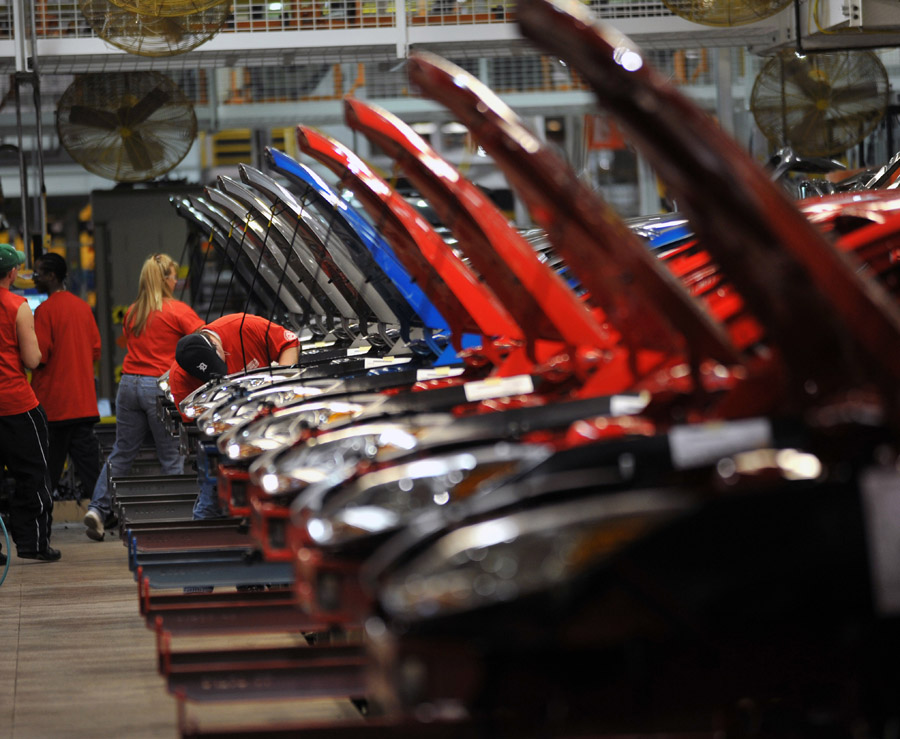 Whether it’s to fly over the Eiffel Tower, whiz through the Grand Canyon or see what the top of your house looks like, most of us have at least played with Google Earth. The software application displays 2-D and 3-D imagery of nearly every point on the globe, allowing users to zoom in and pan around, drop pins on interesting places and even contribute to the site’s vast collection of data by submitting their own 3-D buildings or aerial imagery.

The technology, which also powers Google Maps and similar applications, has helped revolutionize the way we look at our planet, giving us the opportunity to virtually visit places we otherwise would never experience. 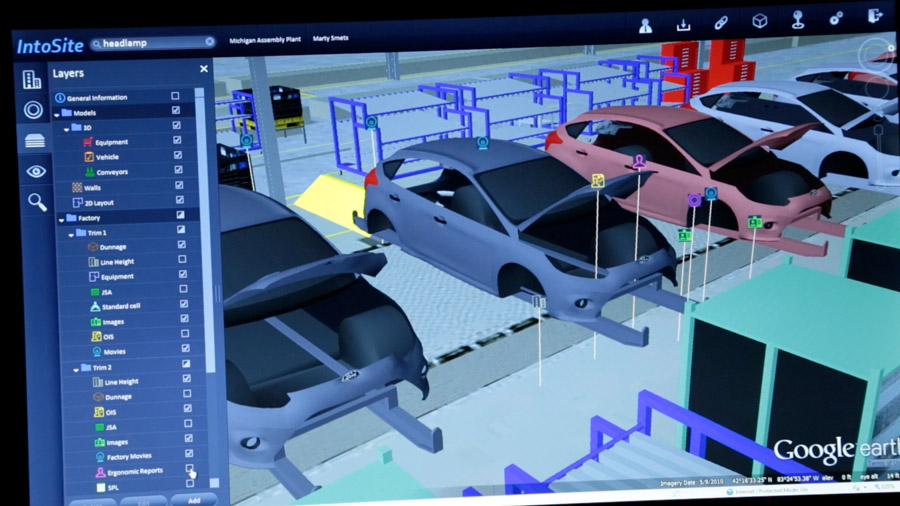 Ford’s Intosite allows specific areas on a vehicle to be tagged with a variety of information, including work instructions, product data and production statistics.

For those with a vintage Edsel in their garage, one interesting Google Earth destination is the Ford Motor Co. assembly plant in Wayne, Mich. Chances are good your Edsel was built there. So, too, was the Mercury station wagon, the Maverick and the Granada, a car that this 50-something once drove to pick up his future wife for Friday date nights.

The plant opened in 1957 and currently employs more than 3,600 people. With 5 million sq. ft. and 369 acres, it’s one of the largest manufacturing footprints in the United States, surpassing even the Boeing aircraft factory in Everett, Wash.

One look from Google Earth shows the enormity of the Ford facility, with its hundreds of exhaust stacks, massive parking lots and railcars standing ready to transport finished vehicles anywhere in the country, or to cargo ships in nearby Lake Erie.

What Google Earth doesn’t show us is a look inside those buildings, to see the floor layouts and the people going about their daily activities. With a factory this large, wouldn’t it be nice to have a bird’s eye view of all that’s going on in there? 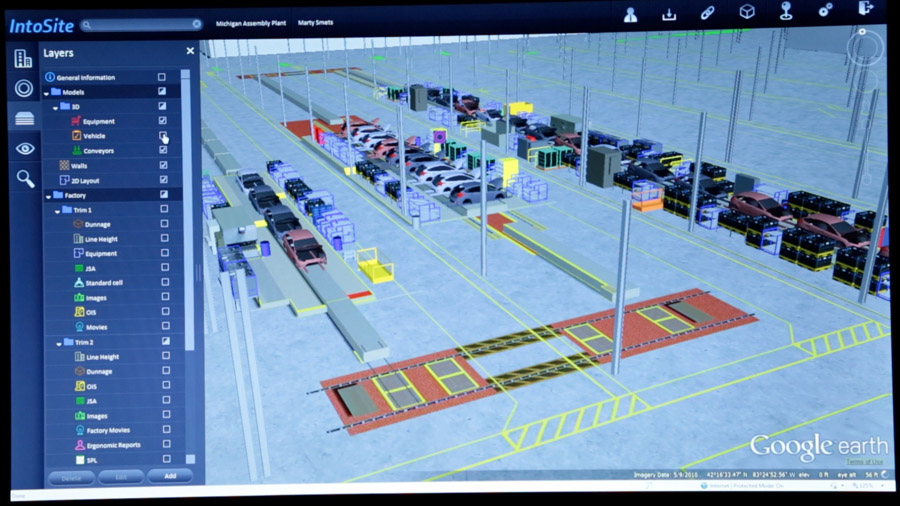 Thanks to Allison Stephens and the team at Ford’s Advanced Engineering & Technology department, that capability is here (at least for Ford employees). Stephens is a global technical specialist in assembly ergonomics and is responsible for much of the work Ford has done over the past 30 years to improve worker safety.

She’s also heavily involved in virtual manufacturing and assembly line simulation. Several years ago, she found herself wondering how her counterparts at other factories were performing certain activities. Stephens decided to do something about it.

“We live in a world where everything is instant,” she says. “If I need to know something, I look on the internet. If I have to go somewhere, I check Google Maps. But at a very large company such as Ford, we struggle with access to simple information like this. There’s no easy way to find out how other facilities are building a car or how they have laid out their transmission line. So you end up with a lot of discussions and meetings, emailing photos and videos and drawings back and forth.”

We found ourselves saying, “Oh, wouldn’t it be nice to have something like a Google Earth that we could use as our communication platform. Then we could just jump on a computer and see what’s happening at different locations.” 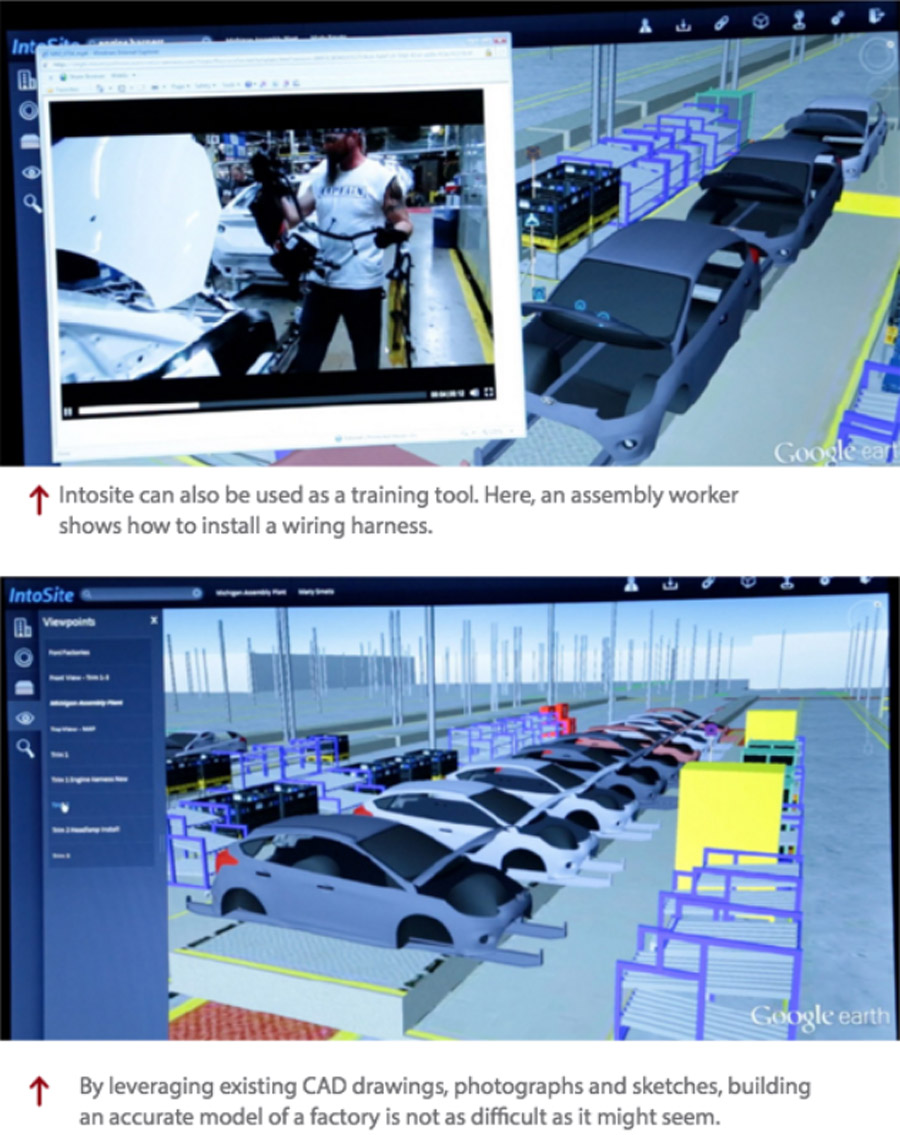 Due to her activities with Jack, a human simulation tool used to analyze worker movements, Stephens works closely with software company Siemens PLM. One day in late 2013 she mentioned her Google Earth idea to Siemens digital manufacturing manager Matthew Malley, who promised to pursue it with others on his Siemens software development team.

Malley was true to his word. The Siemens team discussed ways to introduce Google Earth-like capabilities into the company’s Tecnomatix suite of products.

Aaron Frankel, senior director of marketing for the manufacturing engineering software business segment at Siemens PLM, explains that Tecnomatix was once an Israeli-based software company, but was acquired by Siemens many years ago. It is now a brand name for a portfolio of digital manufacturing solutions, including process design, logistics and material flow, work instructions, factory optimization, dimensional quality, issue tracking, and many additional management and optimization functions.

One of these solutions is Intosite, a cloud-based application that peels back the top of the factory and allows manufacturers to look inside for a 3-D view of their production floor. Work centers and other points of interest can be tagged, asset capabilities shared and what-if scenarios quickly tested.

“In today’s global and complex world of manufacturing, companies need a smart tool like Intosite with which they can directly connect their people to assets and information, as well as overcome distances and IT complexities,” says Eitan Carmi, head of the Intosite business for Siemens PLM.

“This can result in better planning and reviewing processes by bringing the factory’s realities into offices and meeting rooms, proliferation of local best practices across the enterprise through visual communication and improved execution through intuitive access to operational analytics.”

Stephens agrees. “It’s been a really cool project all along. Siemens worked with Google and leveraged some of their technology, and we now have a map-based system where you can sit at your desk and basically break through the ceiling at any of our assembly plants and fly through, just like you do on Google Earth. You don’t necessarily see live feeds (yet), but you can see all of the workstations and assembly line layouts. Then what we can do is pin information to those workstations – photos, simulations, videos or any other pertinent data that we want to make available to anyone within the company.”

Want to see what Stephens sees? Sorry. The security surrounding Ford’s Intosite implementation is multiple levels deep, and it’s accessible only to those with the proper clearance. Still, she says Intosite has become an invaluable learning tool for engineers and assemblers alike. It’s also given Ford employees greater opportunities to innovate and experiment, to share product data and collaborate on designs without having to travel across the country.

For those who are wondering how Ford developed accurate 3-D models of facilities that contain thousands of machine tools, robots, storage racks, benches, assembly areas and all the other minutia contained within the factory walls, it wasn’t as difficult as you might think.

“We started out with 2-D drawings and used a CAD tool to extrude them into 3-D models, but we found that was too laborious,” she says. “Then we discovered there were others in the company doing 3-D scans of various machinery and work areas. We used these models to make what I call 3-D-lite versions, which are like hollow shells of the original object. These provide good visual representations with a lot of detail, but with file sizes small enough to load quickly.” 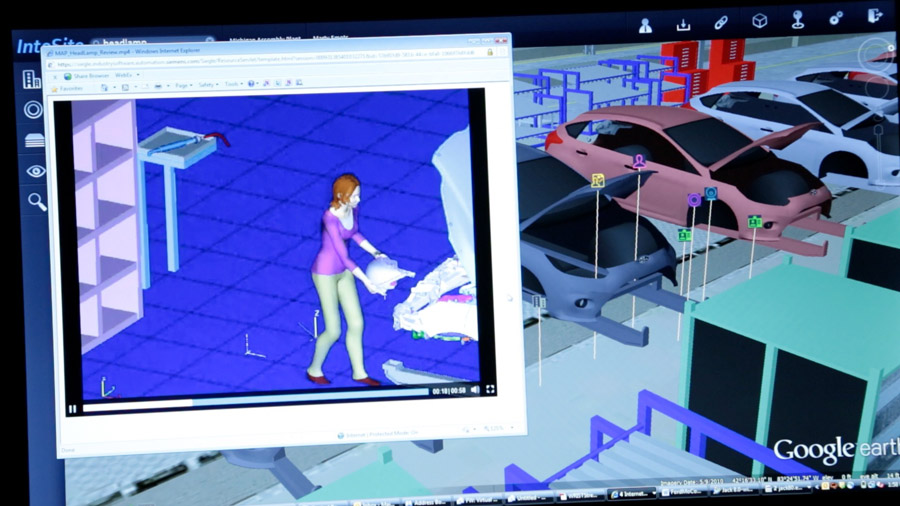 A virtual worker installs part of a headlamp assembly. Intosite makes this and other production scenarios accessible from anywhere in the world.

Taking it to the streets

Through a combination of 2-D and 3-D CAD files, photographs and drawings, Stephens and her team were able to construct complete renderings of their factory. Since that time, they’ve modeled an additional 22 plants with more on the way. Intosite users are now able to fly over these production floors, or if walking is more their speed, they can take a walk using the “street view” most Google users are familiar with.

Either way, employees can stop and peer into whatever area they are interested in, view details of a CNC press brake, run a virtual finger down an electrical schematic or see how to install an engine into a Ford Focus. Best of all, they can do so from their smartphone or tablet PC while sitting practically anywhere in the world.

“We had a call from one of the other plants a few weeks ago,” Stephens says. “They were trying to explain a certain aspect of a job, but we just couldn’t understand what they were telling us. In the past, we might have had to put someone on an airplane to go visit them, but using Intosite, we were able to look at it together on a computer screen. It provided an almost instantaneous response on how to best approach an issue and deal with it.”

Intosite helped with a similar situation in Louisville, Ky., where assemblers were struggling to insert a wire harness through a hole in the engine compartment and into the vehicle body. Someone on the team remembered that the Michigan plant was building a similar car model, and instead of jumping in a car and driving up there, they pulled up the assembly video on Intosite and quickly discovered the problem: The supplier for the harnesses used in Michigan wrapped the wire bundles in tape, which eased their insertion through the firewall.

Stephens says the Intosite project started as one of those aha moments, but has since become an important tool at Ford.

“Intosite is a great platform for sharing and communicating,” she says. “It reduces travel costs and speeds product development, and it’s very interactive, giving people the ability to say, ‘Well, let’s try this,’ or ask questions they might not have thought of otherwise. It puts everything at our fingertips. Right now, we use it for training and development, but I think it will become an important engineering tool for us going forward, one that will help us develop better designs and make decisions more quickly. It’s just a great product.”