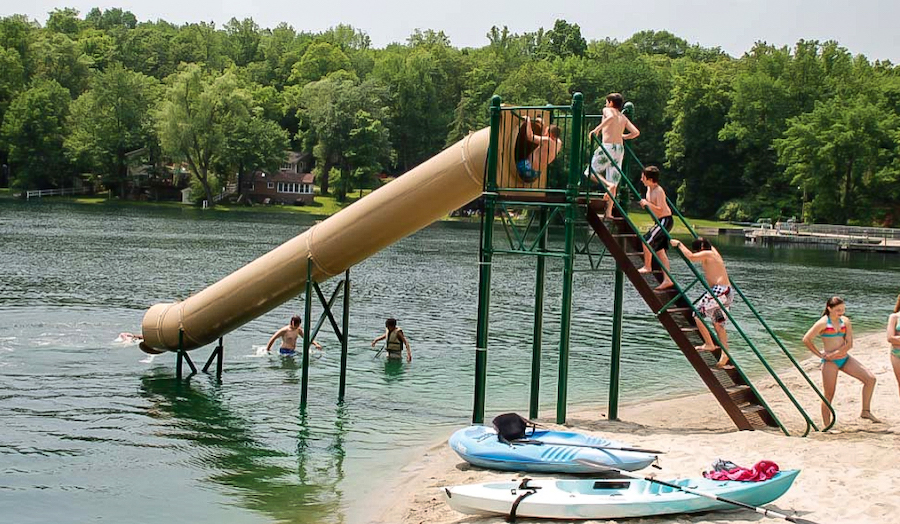 It’s no longer enough to have a diving board or two and a small slide at the local swimming pool. Americans are now attracted to “splash park” features, including extensive and complex waterslides and “lazy rivers.” And as far as the team at Oregon-based Natural Structures is concerned, that’s a good thing. They’ve been fabricating aquatic recreational products for a few decades now.

The company, founded in 1971 by Al and Grace Hausotter, originally built wooden playground equipment, shelters and outdoor furniture. The Hausotter’s son, Ted, and his wife, Jodie, entered the business and were part of a crucial change in direction in the mid to late 1980s.

“We saw a shift in the playground industry,” Jodie Hausotter says, “so we decided to look for other avenues for the company to grow.”

At that time in the warm summer months, she and Ted would frequent the local swimming pool and noticed there wasn’t a lot to it, which is what sparked an idea in Ted to turn the playground line of equipment into waterpark equipment. His parents liked the idea. After a fair amount of research and development, prototypes were built, which received positive feedback at trade shows. They decided at that point to incorporate waterpark products into the business.

Before long, customers requesting platform waterslides wanted them taller and taller, Hausotter says, so, eventually, Natural Structures had to move into a larger building. They rebranded the company, dropping the playground line, as they could sustain the business with the waterpark line alone.

“As we grew the company and got more and more equipment,” Hausotter says, “it enabled us to expand into other avenues, including a line of stainless steel slides. We were also doing a lot more custom work that we wouldn’t have typically done.”

The expansion into the new building came with a press brake and plasma cutting table, which was a fairly significant change for a company that had previously relied on a pipe bender, ironworker, four or five welders and a cutting torch for its metal fabrication needs.

However, with the growth of the company and expansion into new products, a need for tighter tolerances became the norm. Tolerances went from a sixteenth of an inch to around a few thousandths of an inch and had to be achieved on a repeatable basis.

So while a plasma table was a step up in technology, the gantry wasn’t capable of achieving those goals and needed to be replaced.

“It was pretty outdated,” says Percy Dickerson, production supervisor at Natural Structures. “We quickly phased that system out and brought in a new table equipped with a Hypertherm plasma system.”

The company considered waterjet technology first, but the plasma technology won out for a host of reasons, with cost being one of the top factors.

Hypertherm was the brand of the plasma cutting mechanism on the original table that Natural Structures inherited, and so the team decided to stay with the company, selecting a HyPerformance HPR400XD plasma system. The high-precision plasma table incorporated flat plate and rotary axis tube cutting capabilities.

Additionally, Hypertherm’s Edge Connect CNC was added to the new plasma cutting machine, which was a big help as the company evolved into producing spray toys and stainless steel slides.

“We needed tight tolerances on everything and wanted to decrease distortion,” Dickerson says, adding that they could no longer afford inaccurate cuts that left gaps. “Obviously, if you’re trying to weld up a large gap created by poor part tolerances, you’re going to get some warping.”

Using Rotary Tube Pro, Hypertherm’s software for automated design and cut solutions for tube and pipe parts, the Hausotters were able to achieve the tight tolerances on those types of parts, as well.

In the past 16 years, Natural Structures has grown from 15 employees to more than 70. Gross sales grew from $1.5 million to more than $8 million with approximately 85 percent of its products shipping east of the Mississippi River. They also have expanded globally, exporting products to Canada, New Zealand, Cayman Islands, Dominican Republic and Saudi Arabia, among other countries.

The crew at Natural Structures had already been using Hypertherm’s ProNest parts nesting software with the previous plasma table. So, with that experience under his belt, Dickerson says he found Rotary Tube Pro’s intuitive menus to be straightforward to use while creating jobs using the parametric design tool and when importing parts in the 3-D STEP file format.

Some of the splash park equipment can be quite complex. For example, on a single metal post, Dickerson can use Rotary Tube Pro to cut five tabs, which will be connected to a handrail, including bracing parts and cut openings for any required flanges.

“All of those are done on Rotary Tube Pro, including layout,” he says. “There is just a variety of things we do with the rotary axis.”

Since the new system was implemented, Natural Structures has improved its plate, tube and pipe jobs, including those that are of higher detail than the company had previously undertaken.

“We can now process work faster and to tighter tolerances,” Hausotter says, “and the Rotary Tube Pro software makes it easy to program tube jobs with intersections, delivering great fit-up.”

Another Hypertherm technology integrated into Natural Structures’ new plasma cutting solution is True Hole, which is applied on mild steel cuts and produces better hole quality than was previously available on the plasma table – and certainly better than what Natural Structures had been using in the past.

Dickerson says they once used an ironworker to punch holes, which had to be finished with a hand grinder. But by using True Hole, holes are easily and efficiently cut with the new plasma system and the bolts that go into those holes “just drop in tight,” he says.

“It makes my job way easier and I can go much faster,” he says of using all of the Hypertherm software. “Today, one fitter can keep up with three welders, which is pretty significant.”