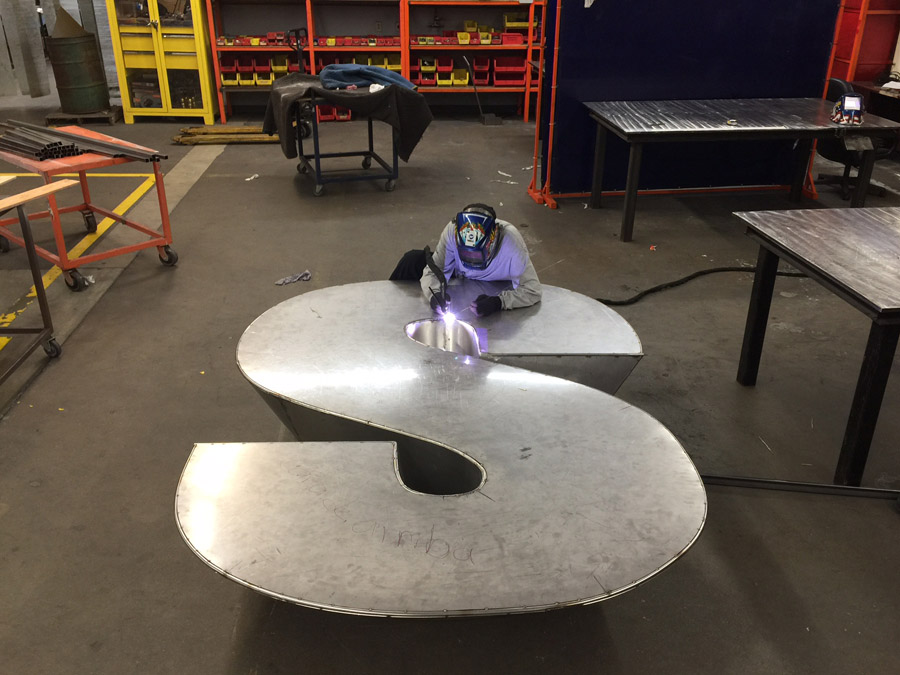 One of the pleasures in reporting on our industry is finding shops that make an interesting or surprising product. While some fabricate storage tanks, others fabricate spacecraft parts. Still others fabricate artistic displays. They use the same machines but the radically different functions or aesthetics of the finished products can catch you by surprise. People from other walks of life wouldn’t suspect that we’re all using the same machines and technologies – that we’re all doing the same things.

But they work a lot like most fabricators. “Nearly everything goes through the lasers,” says Vicent V, company president. (Many things about NicoNat are stylized; Vicent’s full name is Vicent Valdez, but his industry knows him as “Vicent V”) NicoNat has been using two Bystronic CO2 lasers for five or six years, and recently added a Bysprint 4020 fiber laser. Together, they handle a wide variety of materials processed by NicoNat. “Right now our business is 75% metal and 25% glass, wood, and other materials. The 75% metal makes up the structure of everything that we do.” 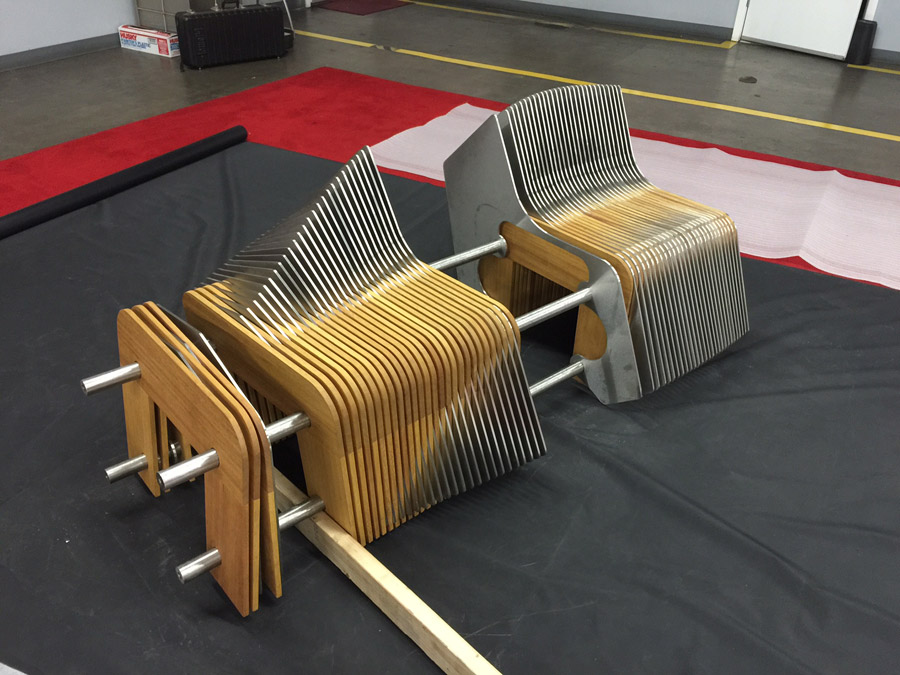 Acquiring the fiber laser was based on a typical demand – faster cutting speed in sheet stock – but it also has some other benefits for NicoNat, One is cutting reflective materials. Making decorative products, they have to cut some brass. It’s only a small percentage of their work – “Maybe 5% of our metalcutting is brass,” says Vicent. “And maybe 10% aluminum. Around35% stainless, and 50% is carbon steel.”

Reflective materials, as many know, are problematic for CO2 lasers. It’s a matter of how the materials’ reflectivity affects the laser light. The longer wavelengths of CO2 lasers tend to reflect from brass and some other metals, slowing the cutting rate down to unacceptable levels. With fiber lasers and their shorter light wavelengths, the light energy is absorbed by the metal and the laser cuts much more effectively. 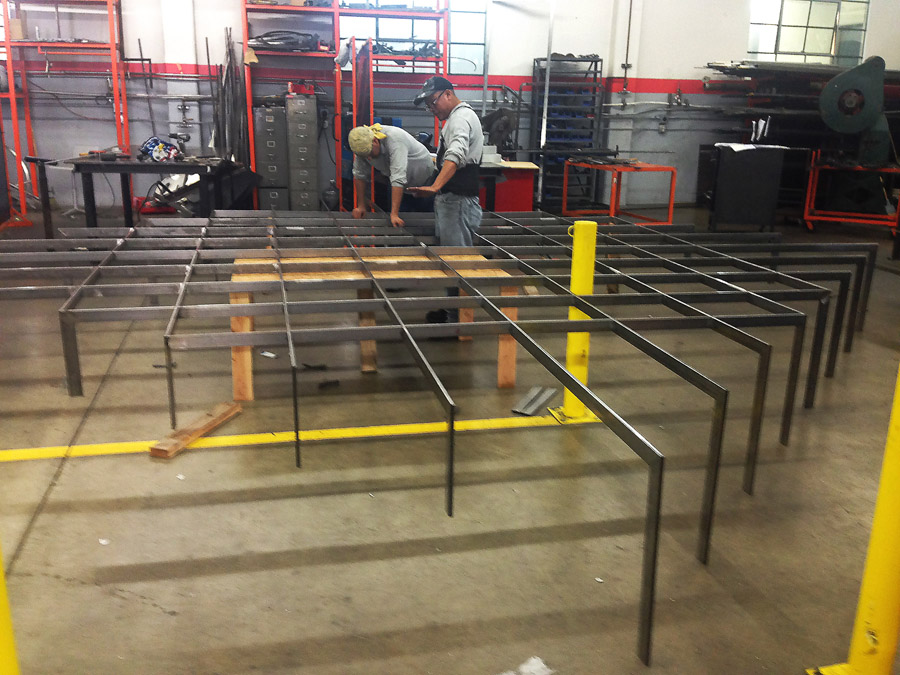 Retail displays can range in size from objects you can hold in your hand, to store-wide structures. If you’re going to do it, plan on having plenty of space.

Besides metals, NicoNat is laser-cutting wood and plastics. The plastics are a problem; the CO2 lasers will cut it effectively but the fiber laser won’t. Again, it’s a matter of how the material reacts to the different wavelengths of light. The short-wavelength fiber laser light goes right through the plastic without cutting it. “It doesn’t even heat it,” says Vicent.

“We can cut it with the CO2 lasers,” he says, “but you don’t want to do a lot of it. It’s the fumes and the effect on the filters. You need special filters if you’re going to cut any quantity of plastics. They have to capture the fumes (some plastics emit cyanide when they’re burned) and, when you’re cutting plastic, some of the melted plastic will end up in the filter of the dust collector and it’s like chewing gum. It plugs the coils of the dust collector.” Vicent reports that a Bystronic customer in Germany, who cuts plastic in production, has invested $1 million on his special dust-collector system. 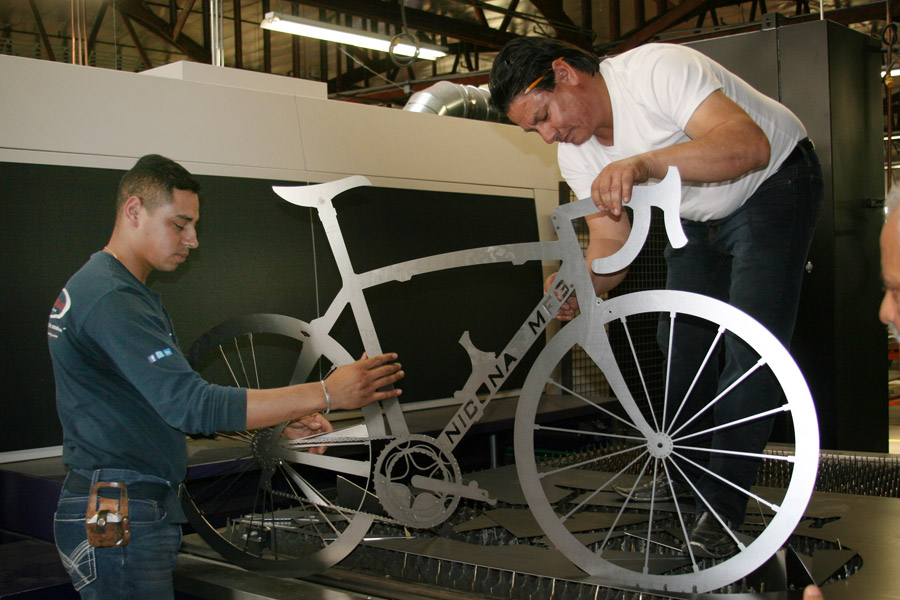 Fun with lasers. If striking design and fabricating is your stock in trade, you’d better have some off-the-wall ideas to promote your business. It looks like you could almost ride this one – but it would be painful.

NicoNat cuts some plastic parts for prototypes and for small volumes, but it isn’t worth it for them to invest in the extremely expensive special filters for plastic. They go to great lengths to protect workers and to avoid accumulating fumes in the shop, but their salvation is to limit it to very small volumes and to send large quantities of plastic work to outside specialists. Vicent remarks that there are certain shops he avoids visiting on days when they’re laser-cutting plastic.

NicoNat’s designs often incorporate wood as well as plastic, in combination with metal structures. They use the lasers to cut and to engrave both wood and plastic. Some of NicoNat’s customers want a part number engraved on every part, either to simplify assembly or to identify replacement parts. We imagine burnt edges on the laser-cut wood but it isn’t as bad as we thought. “We just clean it off and apply a finish,” Vicent says. 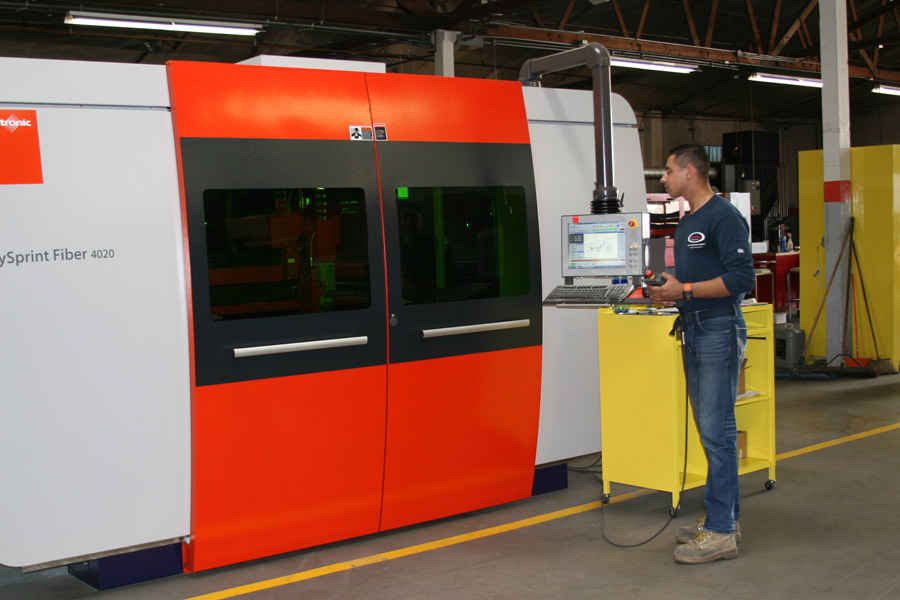 A recent addition of a fiber laser to NicoNat’s machine lineup handles reflective metals and high-speed cutting of thinner ones. But they still need the CO2 for wood, plastics, and some other materials.

“We have cut leather with the lasers,” he says. “We have cut fabrics and paper. It works very well. But that’s all with the CO2 lasers. We haven’t found a way to cut anything but metal with the fiber laser.”

However, they’ve only had the fiber machine for around six months, so they haven’t worked out all of the possibilities. Their experience indicates two important things: First, CO2 lasers are far from being on the way out, as some fiber-laser promoters claim. It’s still more versatile. Each type of laser will handle materials the other one won’t, including reflective metals that the CO2 lasers won’t cut, and non-metallics that the fiber lasers won’t cut. For a shop like NicoNat, they really need both.

They also have some special capabilities. Note that the welding in the photos is mostly TIG. Those are some long seams for a relatively slow welding process, but they need TIG for appearance’s sake. 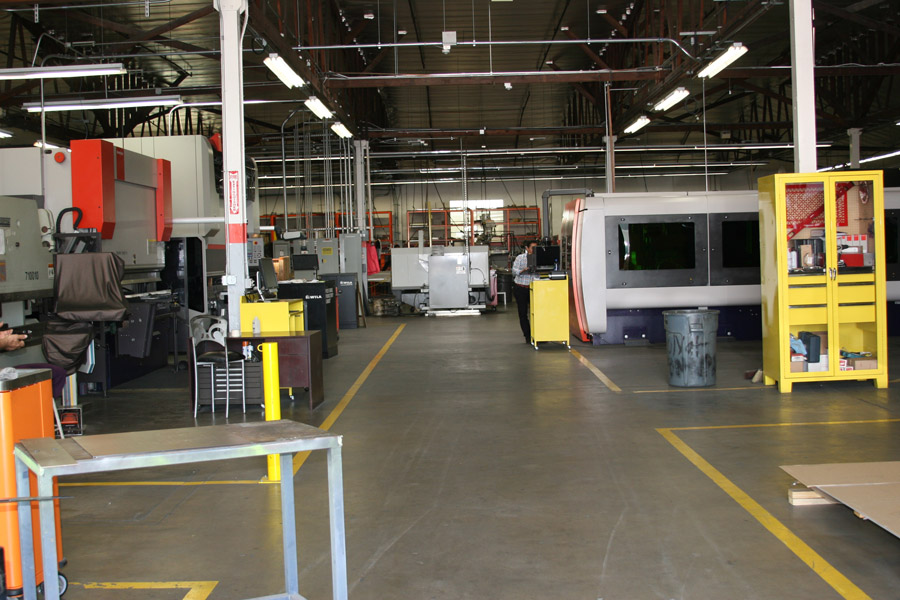 Some designs require very sharp bent corners – too sharp for conventional brake bending. To solve the problem, they have a V-grooving machine that cuts into thin sheet metal, typically 16 gauge, so the press brake is bending at a very thin point in the metal.

Tubing and pipe also make up some of their designs. Vicent estimates that cutting tube, pipe and angles, is 10% of their cutting work. “It’s not enough to invest in a special tube-cutting laser,” he says, and they also can use their milling machine to cut angles and notches when they need to. But they have a tube chuck for one of the CO2 lasers and making those cuts on the laser takes seconds, compared to minutes on the mill.

Cutting glass and plating are two jobs that they send to outside vendors, but final finishing is done in-house. Grinding and other prep is done in-house as well. “We send the dirty work out,” says Vicent. 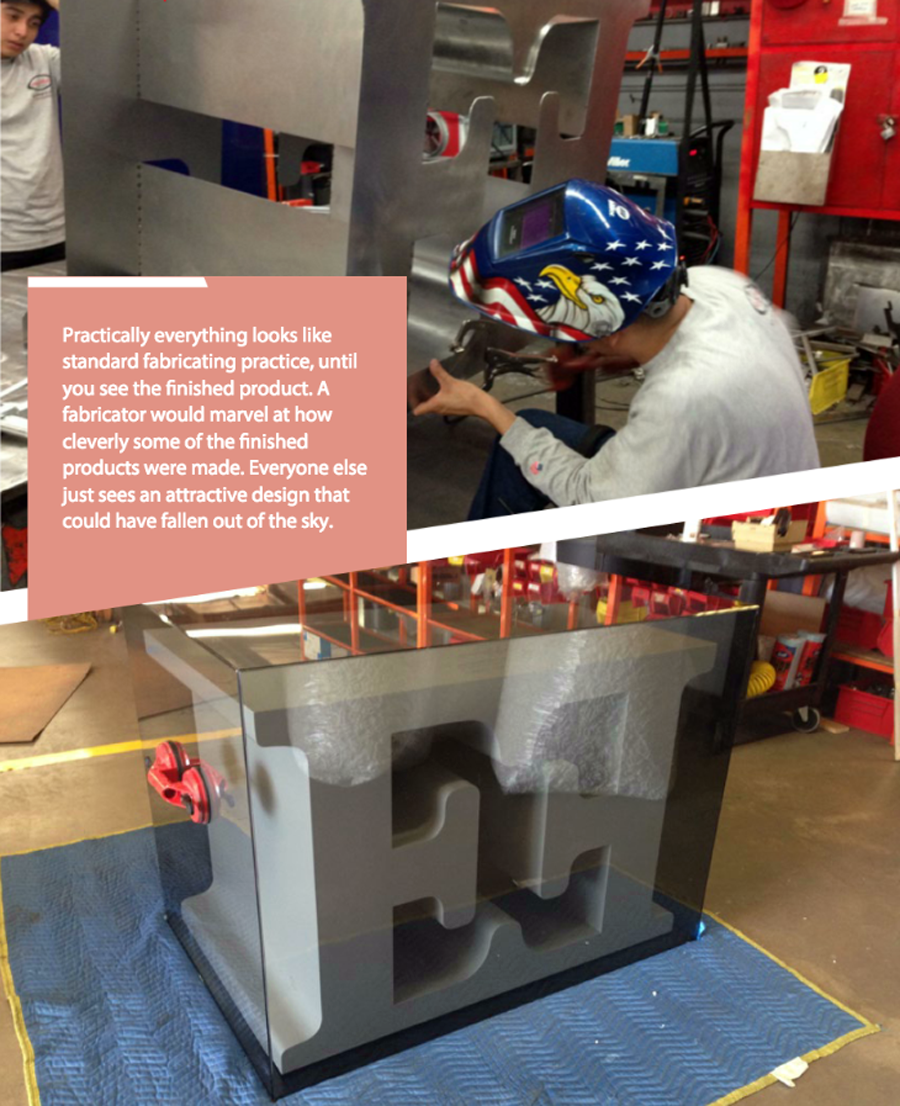 A lot of their work is large. Their fiber laser handles work up to almost 7 ft. by 13 ft. “It’s a big advantage,” says Vicent. “Then we bought a new Bystronic press brake to go with the large-capacity fiber laser.” Staging and trial assembly requires a lot of room, as the photo on page XX shows.

NicoNat does a lot of their own design work – around 60%, they estimate – and, as you can see from the photos, it encompasses a wide range of decorative and display items. Word of mouth is their primary way of getting new work; high-end retailers must talk to each other a lot. NicoNat has found a niche big enough to support their growing company.