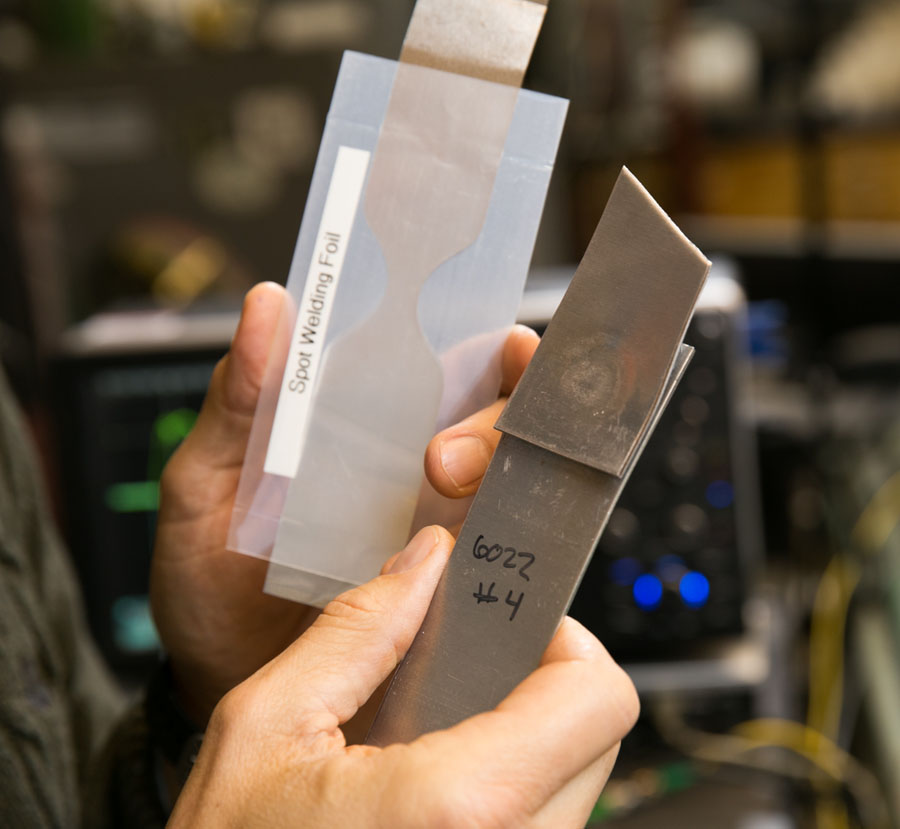 Explosive or collision welding seems too violent a term for a process that creates delicate, wavy “curlicues” of intertwining metallic elements as seen through a microscope, and these curlicues seem too genteel to create a weld joint that is often stronger than the base material.

But, if a book can’t be judged by its cover, then the strength of welds created by a new welding technique can’t be judged without a peel, torque, or other destructive test. In fact, this technique developed by researchers at Ohio State University reportedly consumes 80 percent less energy than resistance spot welding to create a bond that is 50 percent stronger than its well-known counterpart.

Explosive welding has been used since the 1940s. The process uses a controlled explosion to blast a piece of metal into a stationary piece of metal part at speeds great enough to create a bond between them. The new collision-based idea is not that much different, but, like much of today’s technology, the concept that once was used to weld parts for giant ships and the like has been miniaturized. It requires no explosives, no explosion fields. It requires foil and an electrical charge. Instead of a massive detonation, there is a small report and a wisp of smoke.

The technique is called vaporization foil actuator welding (VFAW) and it can produce a weld bond between two like or dissimilar metals. The explosive process does not melt either metal, instead it plasticizes the metal surfaces, not with heat but with force, causing them to fuse at the micro level and create a weld.This conjoining creates the effect that was described as a curlicue last October when the University posted a story about the technique on its website. 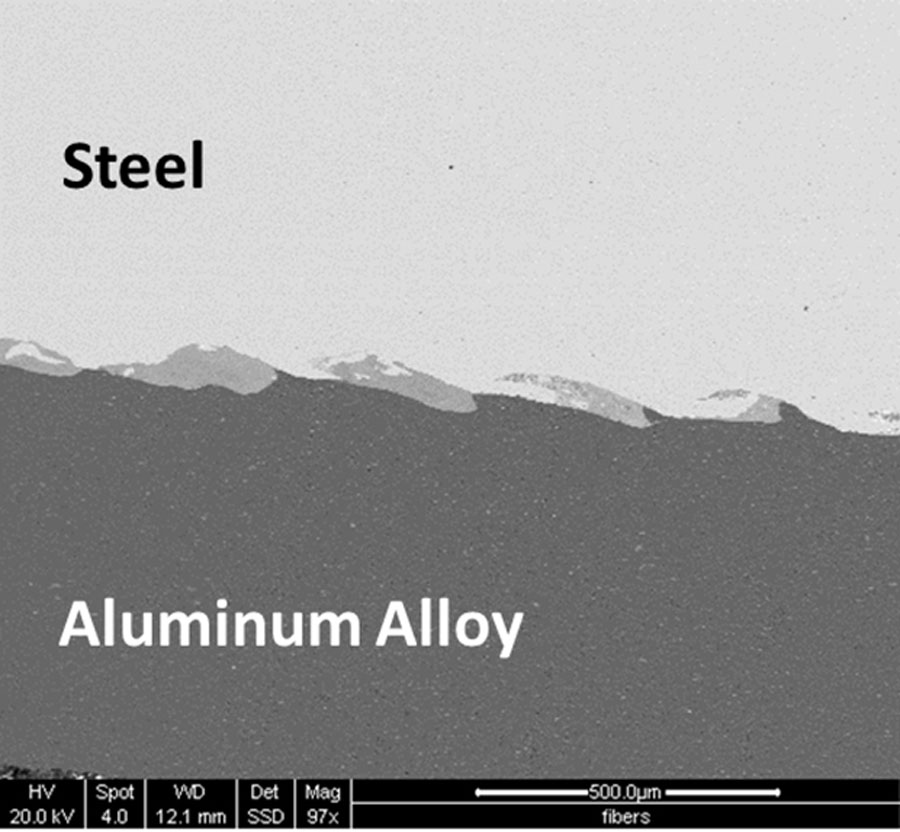 The VFA technique uses a high voltage capacitor bank, which can store electrical energy at several thousand Volts, to create short electrical pulses. The electrical energy stored in the capacitor bank is released through a switched circuit that contains a thin metal conductor. Within microseconds, the foil or metal conductor, is heated above the foil’s energy of sublimation, causing a phase change, skipping the liquid step, vaporizing the metal within tens of microseconds into a gas that rapidly expands toward the target at speeds reaching Mach 2, or 2,000 miles per hour. This causes the plasma to collide with the two pieces of metal and join them, creating a joint that is often stronger than the base material. The technique can also be used to form and shear and for tube expansion.

Daehn said the technology might be an alternative to such welding alternatives as resistance spot welding. With this traditional technique, high amounts of electrical current are passed through pieces of metal, consuming a lot of energy in the process, and the metal’s electrical resistance partially melts the metals, which solidify to form the weld.In addition to the energy consumption, the parts can face HAZ issues, and the melted sections of the metal are not as strong as they were before the welding process.

In an extensive video, Daehn said the VFA process creates a weld that looks like a spot weld, but with “only about 1.2 kilojoule of energy used to make a weld with shear strengths that are roughly twice as strong. The energy consumption is really low, using about 20 percent of the energy used in resistance spot welding, and getting better properties along the way. I’m pretty confident we’ll be able to do this at about 1 weld per second at 1 kilojoule per weld “

The process requires light tooling. Starting with a block of steel, the vaporizing foil is laid on top, and then the flyer, which is the metal sheet to be propelled, is laid on top of the vaporizing foil actuator with electrical insulation in between. Plastic stand-off sheets are then put in place; the target plate, which is the stationary piece of the colliding tandem, is placed on top of a standoff distance away from the flyer. Finally, everything is constrained by another heavy block of steel and bolted down.

In one early experiment overseen by OSU research scientist Anupan Vivek, who helped develop the technique while a doctoral student, led a team that welded 304 stainless steel with 6061 aluminum T4 temper condition (heat treated, and naturally aged to a substantially stable condition.)The welding block was tied to a capacitor bank charged up to 16 kilojoules, of which about 8 kilojoules were used for the experiment.

The technique could have an impact on the auto industry that needs to reduce overall weight in an effort to improve gas mileage, but still retain strength properties. The aerospace industry, too, is looking to reduce weight and retain its metallurgic properties.

Work is continuing to meet these goals. Daehn said that the goal is to reach 100 percent efficiency, meaning that the weld is stronger than the base material.In terms of fitting the technique into current manufacturing layouts, Daehn said that the system can be integrated into robotic and other types of manufacturing cells. Methods have proven capable of bonding all dissimilar metal combinations attempted, including Al-Mg, Al-Fe, Al-Ti, Al-Ni, Al-Cu, Ti-Fe, Cu-Fe, and laminated series with three or more layers.

“Each industry has their combinations they really care about. For automotive, aluminum and steel is a big deal,” said Daehn. “If you’re doing aircraft engines, nickel-based to titanium is a big deal. Those are very common materials that have to be joined sometimes. For marine service, it’s very often that they make stainless and brass, things like that. We have had some experience with all of those and they kind of work. There’s a lot of history in impact and explosive welding and we’re leveraging a lot of that as best we can, but at the same time, this is a technique you can carry out in a standard factory. It’s the way we want to develop this that’s very different than explosive welding.” 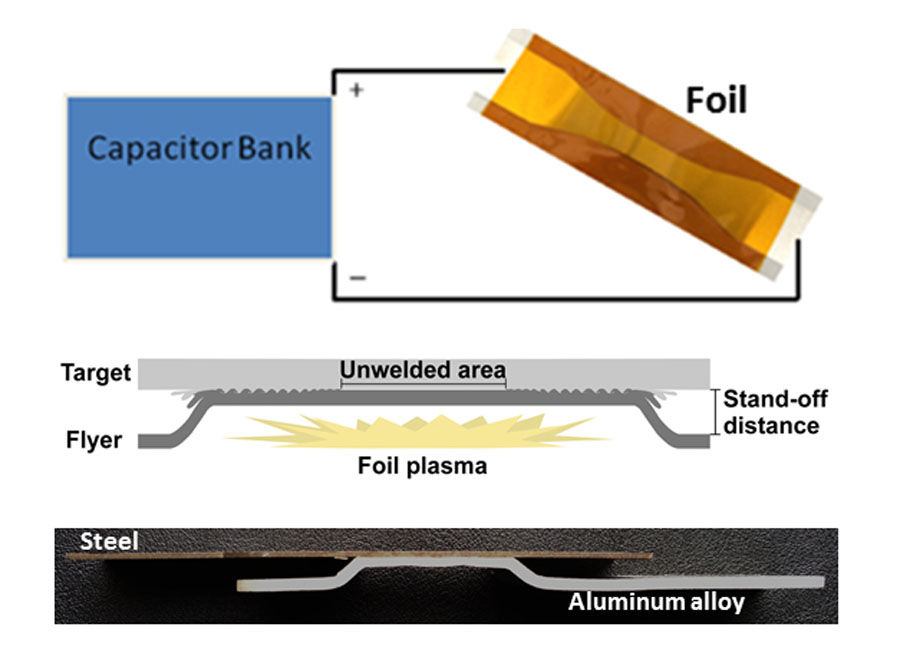 Some potential issues have not been considered, or they are outside the realm of the research. Thermal expansion is one such area. “Typically, a lot of these things don’t see huge thermal excursions in service,” said Daehn. This could be a problem if the paint bake was at high temperature and then the low temperature was below freezing. “If you’ve got a big aluminum panel on a steel frame, and you’ve got it tacked in a few places, you can have distortion problems. We don’t address that. That said, there are still lots of locations where you’d like to make an aluminum-to-steel joint that wouldn’t necessarily have that problem: where it’s not a big floppy panel.”

How about in aerospace, with that nickel-titanium, and nickel-based in titanium? “We are doing very preliminary work on that,” he said. “Another way to mitigate that is to have an interlayer. We’ve thought about that more for corrosion resistance and thermal expansion mismatch difference. Often you have materials with two different corrosion potentials, that can make for a bad joint with respect to corrosion. We can have a third layer that has intermediate properties between the corrosion potential and thermal expansion. That’s something that does work.”