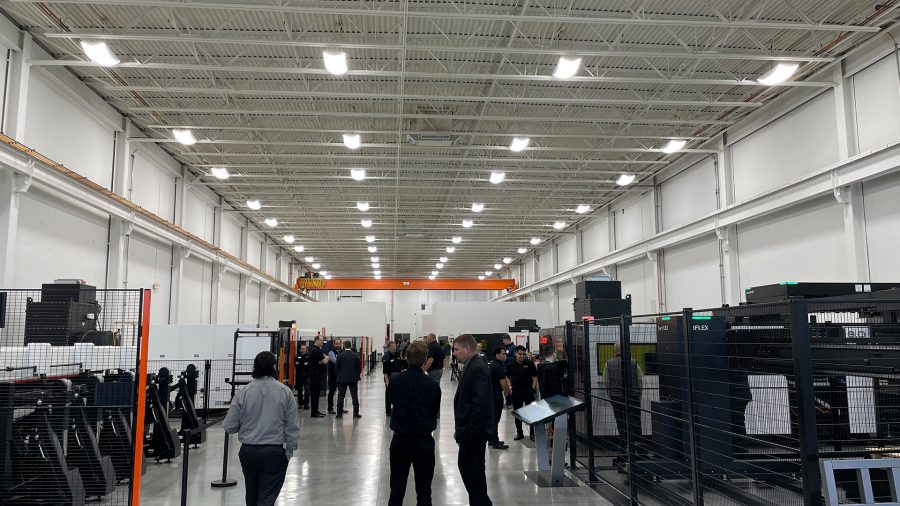 At the height of the pandemic, many companies had no choice but to close their facilities to the public. Some were able to keep a skeleton crew running while others took their operations, as much as they could, to their home offices. Overall, businesses got creative and made the best of a bad situation.

Take Mazak Optonics Corp. as an example. During the past two years, the company’s North American headquarters in Elgin, Ill., underwent a major 20,000-sq.-ft. expansion, which was unveiled at a recent open house. The project included the addition of new spaces, such as a large auditorium, that are dedicated to customer training and support. Increased parts warehouse capacity and an updated inventory management system were also a strategic component to Mazak’s expansion to further support its commitment to customers.

During the open house, Mazak president, Al Bohlen, gave a rousing presentation that walked visitors through the company’s last two years of work. He explained the thought process behind the updated and expanded facility while also outlining the launch of a new high-power fiber laser system, the Optiplex 3015 NEO.

The first thing that caught visitors’ attention at Mazak’s three-day open house was news of the NEO and its 15-kW power availability. While this higher power level offers the benefit of faster processing speeds, Bohlen used his presentation to highlight the even greater benefits that can be achieved when higher power levels are paired with the ability to control a laser beam’s shape, power distribution and diameter.

For those not familiar with Mazak’s portfolio of laser processing equipment, the ability to modify a laser beam’s power profile isn’t actually new. The company released its S series, which stands for shaping, for its Nexus fiber laser platform almost four years ago. While it’s not brand-new, the technology does deserve new attention – specifically on the NEO platform when processing thick plate with Mazak’s new proprietary cutting head.

“We developed a fiber laser cutting head that could leverage true mode shaping,” Bohlen explained to attendees. “Traditional CO2 produces a wider diameter beam and a ring power mode that lends itself to better thick plate cutting. The main reason cut quality in heavy plate deteriorates with a fiber laser is because the beam power profile is highly concentrated to the center and the kerf path results in molten material straying through the cut, which leaves heavy striations behind and increased cut angle.”

This narrow beam diameter and the striations it left behind explains why thick-plate fabricators initially hesitated to adopt fiber as thin-sheet fabricators were flocking to it. Understanding this, fiber laser manufacturers have been developing ways for users to “tune” their beam to meet their application needs. Mazak’s variable beam technology offers the ability to widen the fiber laser’s beam diameter while also allowing a user to control where the power of the beam is concentrated, thereby creating multiple beam shapes, sometimes referred to as modes.

“A standard fiber laser produces what we call in technical terms zero-zero mode,” Bohlen said. “It’s a very symmetrical shape with heavy power density at the tip of the beam. This means you have a super-high concentration in a very small spot size.

“With great power density comes incredible capability to cut very fast in thin material, faster than a CO2,” he added. “The challenge with fiber laser [zero-zero mode] is that the beam is so narrow and the heat is so centrally dominant that it’s hard to get the molten material through the cut.”

As is seen in Figure 1, when the location of the beam concentration can be shifted from the center or tip of the beam to the outer area, a new shape or mode is created that is better suited to remove the molten material known for creating undesirable striations on the edge of the cut. By giving customers the ability to modify the beam, they are essentially given a multi-tool for the various materials and thicknesses they need to process.

While attendees at the open house were initially interested in the ultra-high power levels of the NEO and then the ability to customize the beam to their needs, Bohlen reminded the crowd that there is much more to the story.

“We’re trying to solve this challenge of how to create a beam that is a different mode and different heat profile with a controlled diameter to offer the best of both worlds,” he said. “Having brute strength and power is not the total answer. Like a car with a thousand horsepower, it has to have the right transmission, drive train, suspension and tires. Similarly, with a laser machine, you have to have the right combination of power and delivery to get the right results.”

And so that’s why Mazak developed a proprietary cutting head that is capable of proportioning the beam to produce the shape and diameter needed for various applications. Mazak also puts great stock in the function of the nozzle, offering customers an automatic nozzle changer and nozzle centering camera. With intelligent nozzle technology, customers can expect high-quality cuts while also reducing their cutting assist gas consumption.

“We continued to develop our nozzle technology and can now reduce gas consumption while at the same time increasing cut speed by simply changing to what we call the Trim Cut nozzle, which increases the cut speed by 20 percent,” Bohlen explained. “Same material, same application, same power, same everything; just switch to this nozzle and reduce gas consumption by over 30 percent while increasing the cut speed by 20 percent as well as part quality. In this example, the material was grade 50 steel.”

Beyond the new cutting head and nozzles, quality and speed also rely on the overall performance of the machine. Sophisticated cutting requires a sophisticated operating system.

“Everything I’ve talked about today requires a very powerful control to not only command the machine to run and move in the x, y and z axes, but also for power changing and nozzle changing,” Bohlen relayed. “You need a very fast processor that can switch on the fly; sometimes we pierce heavy material with one mode and cut with a different one, and you need to be able to change that mode selection, but in milliseconds.

“So, we needed a much more advanced and more powerful control that could handle all of this type of real-time cutting and monitoring for various types of materials,” he added. “Think of the processing power needed to identify whether the cutting process is going well or not and then the alerts involved to improve the cut conditions in real time.”

Ease of use is also a factor, of course, which is why Mazak focused on delivering modern, user-friendly controls. The NEO features Mazak’s new Mazatrol SmoothLx CNC control with its large 21.5-in. screen and touch panel. For further productivity, the NEO boasts dual monitors that allow multiple applications to run simultaneously. Operators also are given the flexibility of working at the front or side of the machine thanks to the CNC control, which rotates to either side of the machine.

Similarly, operators can take advantage of the machine’s large front and side access doors, which minimizes any potential restrictions for loading and unloading. With an ultimate end goal of always helping customers make the most of their equipment investments, Mazak stocked its NEO with smart technology and features.

And as was apparent in the new expanded facility, the team at Mazak understands the value of customer training and education to fully leverage the machine’s capabilities. To do so, one can expect that customers will flood into its classrooms and communal spaces now that in-person events are back in full swing.