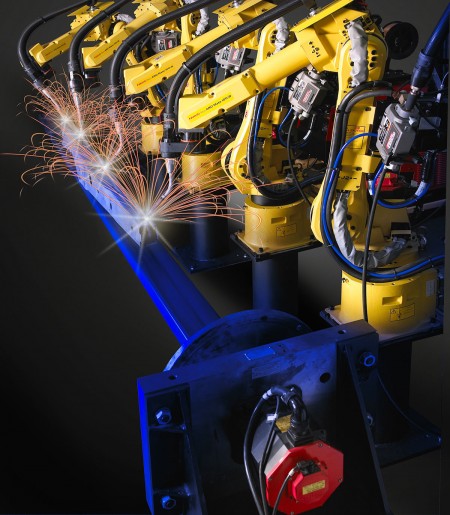 A manufacturer considering robotic automation for one of its processes has many options to review with the robot manufacturer or the robotic cell builder. A critical decision is whether to use auxiliary axis components.

Auxiliary axes are probably the most beneficial component because they allow manufacturers to expand the work envelope (the area the robot will be doing the actual work), create multiple workstations and provide increased access to tooling and parts. Auxiliary axis components are also used to balance workloads so that the welding system can maintain maximum machine uptime.

For parts approaching 6 ft. in length, it may be more cost effective to use a smaller robot and expand its active work envelope with auxiliary axes then to use a larger robot with a fixed work envelope.

Three primary options are used to expand the work envelope. First is to mount the robot onto a shuttle or carriage that is, in turn, mounted onto a linear rail system (Figure 1). Typically, this requires a basic motor and gear box and is set up to be integrated as part of the robot’s X or Y positional location.

These motors are generally manipulated as a subgroup of the robot. The application allows one robot to be able to work at several workstations spaced along the length of the rail system or allows the robot to cover long parts without having to compromise accessibility. This also allows one robot to accommodate multiple changes in length.

For example, a manufacturer making 4-, 8-, 12- and 20-ft. trailers can use a single robot on a rail system 20-ft. long to cover this entire product range instead of buying a robot system dedicated to each trailer size. This minimizes the manufacturing floor space required and capital expenses.

The last application to expand the work envelope is to move the carriage system mentioned earlier vertically or in a direction orthogonal or perpendicular to the main rail system. This allows the robot to access parts high off the ground but still return to ground level for servicing and preventive maintenance.

Creating multiple workstations is a common use of auxiliary axes. In the simplest form, a motor and gear box are mounted to a table surface from the underside. When the robot has finished working on the A side of the table, it can index the table to rotate the B side into the work envelope while an operator or another robot unloads and reloads the A side, thus creating a two-station cell.

When workstations rotate about a vertical axis they are referred to as a turn-table positioner. When the stations are exchanged about a horizontal axis, this is referred to as a ferris wheel-style positioner (Figure 2). The functionality of any of these combinations is increased by adding multiple motors to each station to provide more flexibility in positioning the part.

A second advantage of multiple stations is flexibility. The company can more easily switch between parts and minimize the time spent changing the tooling over to the next batch of parts.

For example, take a company that makes trailer axels. Let’s say Station A only runs standard axles and Station B only runs heavy-duty axles on the same robot system. Having two stations means the operator does not have to stop the robot to change tooling when it wants to switch between standard and heavy-duty axles.

Auxiliary axes provide additional access to tooling and parts by manipulating them to expose previously unreachable areas by rotating along multiple axes. This can be as simple as utilizing a single-axis or dual-axis positioner (Figure 3). Or it can be as complex as using multiple axes in combination to orient the weld joint to provide the optimal work angle like a drop center (Figure 4) or skyhook positioner (Figure 5).

A drop center positioner works well for something large like a frame for a bulldozer or tractor. The positioner provides access to all the welds from one side of the frame and then rotates the other side of the frame toward the robot to process that side without having to remove the part.

A multiple-axis skyhook positioner can improve weld quality by minimizing out-of-position welding. When this type of positioner is used with a software option called coordinated motion, the robot can make continuous welds across multiple surfaces by manipulating the part while welding it. This further improves the quality, integrity and appearance of the finished product.

Consider a bucket for an excavator or backhoe. A skyhook positioner allows the bucket to be positioned so it can be welded on all four sides on the outside and also manipulates the bucket to allow access to the inside.

Any of these auxiliary axis components can provide great benefits. First, a manufacturer can minimize the floor space and capital costs by expanding the work envelope. Second, increase the efficiency and uptime by having multiple workstations. Third, increase flexibility by being able to handle multiple sized parts. And lastly, improve quality by improving the accessibility to multiple surfaces of the same part.