The automotive industry has engaged in the widespread implementation of high-speed, automated resistance welding that provides a cost-effective and proven method of rapidly welding hundreds of parts per hour. While the process is fast, most of the methods to ensure a quality weld rely on offline destructive and nondestructive testing (typically ultrasonic testing) of selected components .

What is missing, according to Bosch Rexroth’s Dave Halford, Industry Sector Manager – Welding, is in-process inspection and real-time adaptive control of resistance welding.

Adaptive control is essentially a closed-loop system in which a control system monitors various parameters and verifies whether the data being tracked falls within specification limits, based on precise functional characteristics of the welding system. Every weld is performed within the tightest quality tolerances.

Robotic resistance welding is a high-volume, high-speed assembly process. A closed loop system can monitor and correct if certain parameters range outside of specified control limits.

Compare this to typical manual ultrasonic inspection methods that involve taking a sample part from the line and subjecting it to a manual, standalone inspection — as a representation of the quality of that particular welding process, during a given production run. While it is non-destructive, it is time consuming and has the potential to introduce repeated inconsistencies, based on a tester’s opinion of what represents a good weld.

Adaptive resistance welding control integrates the inspection of each weld, and the real-time control of how each weld is performed, to vastly improve the reliability of the welding process and simultaneously maintain the highest levels of welding throughput.

Bosch Rexroth offers the PSQ 6000 controller that works in tandem with Bosch weld controller’s constant current control system to automatically raise and lower the welding current and weld time in real time, to keep the actual welding parameter values as close as possible to those of the known “master curve.”The anticipated result is that the weld will have the equivalent quality. The controller can be integrated into new and existing lines by adding a pair of voltage sense wires and installing an adaptive card into a Bosch Rexroth weld controller, Taylor and Kowal said.

The controller technology can integrate complex data such as high speed sampling data of current voltage and resistance, process those inputs against proven performance curves and then adjust the performance of the automated production platform to prevent faults, errors or less-than-acceptable product from being created in the first place. 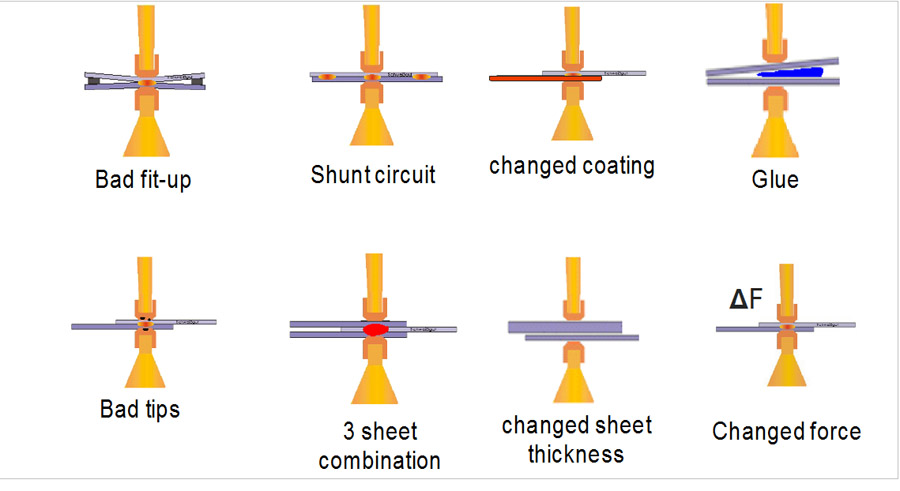 As resistance spot welding users will know, the process is prone to weld disturbance, including shunting, caused by alternative current paths leading to a loss of energy; bad fitting of sheets and variations of coating and sheet thickness.

Rexroth’s adaptive welding platform measures the weld current and voltage at the electrode. Mathematical algorithms calculate resistance curves and energy balance. Data from the weld such as PSF (Process Stability Factor), UIP (Weld Quality Factor) and expulsion—bursts of molten metal caused by a variety of factors such as appying excessive heat–are stored and made available for monitoring and trend analysis. The current is then adjusted to compensate for minute differences as welding proceeds. In special circumstances, sheet combinations with different thicknesses and coatings can be welded by a single program, for special process applications (such as manual gun applications).

The setting of weld parameters is crucial in obtaining a “good” weld, reports Halford. Too much energy creates weld “splash,” while too little can create a weld failure. “While disturbances during the weld can easily create a ‘splash,’ the big fear for many users of resistance spot welding is going into the failure zone which, more often than not, will result in the recall of parts,” said Halford.

The resistance weld process is prone to weld disturbance, including shunting, caused by alternative current paths leading to a loss of energy; bad fitting of sheets; and variations of coating and sheet thickness. Problems can also include deterioration of the condition of welding tips, inclusion of sealer and adhesives between the material, and problems attributable to wear of pneumatic cylinders, which creates a variation in weld force affecting weld condition.

Rather than waiting until components have been processed to verify how theses problems have effected quality, adaptive resistance welding control automatically compensates to keep production and quality up to the required levels. As gun tips undergo wear, for example, the PSQ 6000 platform compensates for changes in their output, so that the welds remain reliable.

The system can provide an information framework to assure manufacturers that the weld reliability is actually being achieved: Since 100% of the welds are inspected in real-time, the platform captures a record of each weld, and any variations the controller made to ensure that the weld was within the established parameters.

There is also a worker safety benefit from adaptive resistance welding control. Many highly automated resistance welding operations, feature multiple robots carrying out hundreds of welds a minute, generating a significant amount of expulsion, Hot, dangerous sparks can impact worker safety, and may require the integration of enclosures and other expensive protective devices and procedures, according to Taylor and Kowal.

Adaptive resistance welding control modulates the current flow to the welding tools to such a precise extent that expulsion becomes practically non-existent, according to Halford. Instead of delivering a constant flow of power to the guns, which in certain instances and with certain materials is in excess of what is needed to complete the weld, the real-time feedback of conditions on the component’s surface enables the controller to adjust the power flow to the appropriate level to complete the weld without generating expulsion.

Not only does this increase worker safety, it reduces the dirt and contamination associated with constant expulsions in the welding workspace. Reducing particulates on the production line floor means a cleaner environment, with less need for maintenance; it also eliminates contaminants that can interfere with sensitive electronic connections, sensors and other production line equipment.

In addition, some studies have shown that it is possible to reduce overall energy consumption by welding tools through adaptive control, since only the amount of energy needed to complete the weld is being delivered to the tool, according to Halford. 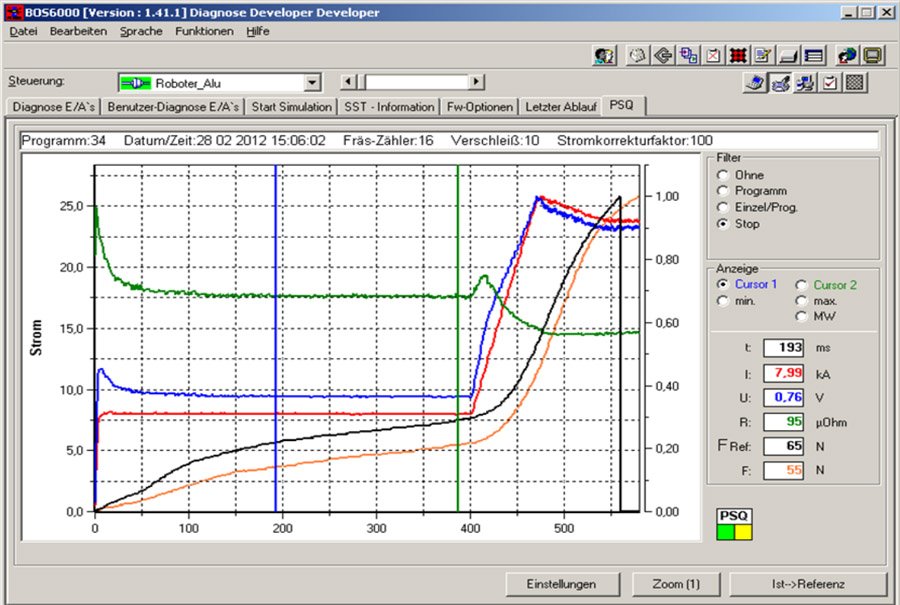 The true value of any technology to improve automation is measured in how it can ultimately help a manufacturer generate savings through improved productivity and/or elimination or reduction of manufacturing costs. Adaptive resistance welding control offers multiple pathways to improving the total cost of ownership of welding systems:

• Major reductions in testing costs — including labor, time for testing, documentation, cost per part tested and scrapped and testing materials

While there are costs associated with adding adaptive control to resistance welding platforms, Rexroth developed a model for broadly comparing costs of a platform that used manual destructive testing versus use of adaptive welding control.

On a theoretical resistance welding platform of 14 robots welding 150 spots per part, generating approximately 800 parts per day in three shifts, the return on investment was significant: Even after factoring in the cost of the PSQ 6000’s components and programming, a manufacturer could expect to reduce the cost of testing and quality control for resistance welding by more than 30% over six years, through reductions in labor costs, materials costs, scrapped test materials costs and time.

This saving does not include any savings associated with improved parts quality — and with adaptive control, 100% of parts welded are tested and the quality of the welds documented.