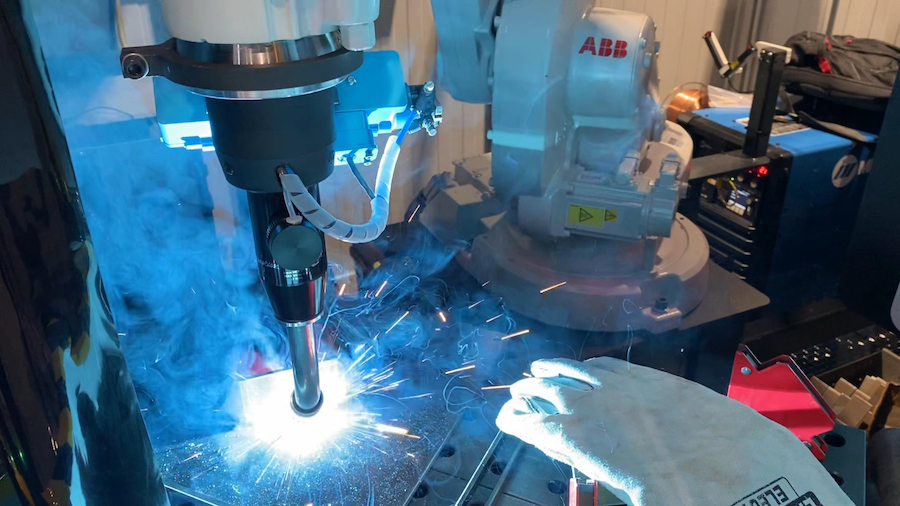 The recent growth in the North American metal fabrication industry, coupled with the well-documented lack of available welders, has led to increased interest in robotic welding automation. With a growing shortage of welders, the fundamental goal for a company installing welding automation is not to replace manual welders, but to enhance their productivity. That is, keep existing welders on staff and add welding robots to meet increasing part volume requirements with consistent, high-quality welds.

The return on investment (ROI) calculation for a traditional two-station robotic arc welding cell is primarily based on the cell having approximately three times the throughput of a good manual welder. A good manual welder usually has a 20 to 25 percent arc-on time (though it can easily dip below 10 percent), which is the percentage of time that they are actually welding. The rest of the time, they are adjusting the part or performing other tasks or simply taking a break because welding is physically demanding.

A traditional industrial robotic cell with two stations can have a 75 percent or better arc-on time. While the robot is welding on one station, the operator can unload a newly welded part and load a fresh part to be welded on the other station. Once the parts are loaded, the robot can immediately switch stations and start welding with minimal delay. This production throughput improvement from 25 to 75 percent, at equal or better quality, usually makes for an easy and fairly short ROI calculation.

So, what’s holding back the widespread adoption of robotic welding?

What’s not included in the simple ROI calculation mentioned previously is the additional investment required to train personnel to program and operate the robotic cells. Instructional

costs in traditional robot programming can easily reach $15,000 per person when you add in lost wages and productivity, along with classes and travel costs for the typical two weeks required for sufficient training. And, with the high demand for welders, especially welders that are robot programmers, that knowledge, once gained, can be difficult to retain.

What the industry needs, and what new technology is providing, is a way to make it quick and easy to program and operate a robotic cell without knowing robot programing code or without having the CAD file of a part or the wherewithal to use it.

One way to make robotic welding easier is to use a collaborative robot, a.k.a. a cobot. Cobots are robots that are lighter, slower and have a much lower capacity than traditional industrial robots. This gives them the physical advantages of portability and fewer safety requirements. But, most importantly, they can be led to a programming position by directly moving the robot torch to the right spot by hand.

A cobot in a welding application is traditionally mounted on a weld table cart and wheeled to the part. For smaller parts, the part is secured to the table in front of the cobot. The operator manually teaches and tunes the weld path and then can weld a single or small batch of parts, secured with some clamps or other simple fixturing.

Because the cobot is idle during the teaching and part handling period, the system is only marginally faster than manual welding, but still a lot easier. And, a cobot typically delivers a higher quality weld because its path is very steady compared to a welder’s hand.

So, while the ROI improvement based on welding arc-on time is not nearly as significant for a cobot as for a traditional industrial robot, the key advantages are more flexibility and ease of use.

But what if you need the production speed and greater ROI of a more heavy-duty industrial robotic welding system and you don’t have CAD experience? Or, what if you have a high-mix, low-volume production regiment, but you don’t want to commit to multiple weeks of intensive programming training for members of your valuable manual welding staff? This is where new technology steps in.

The platform allows a welder to teach a task to the robot in the same way someone would teach another person – by pointing to where the weld should be applied and letting the robot learn the path on its own. The platform features a simple, low-cost 3-D camera in a protective box attached to the robot end-of-arm tooling and uses a touchscreen interface to guide the welder through some simple steps: scan, teach, validate and tune.

To start the process, the welder presses the scan button to instruct the robot to generate a representative model of the part. The robot then moves over the weld area with its 3-D camera open and automatically creates the model. No CAD of the part or even knowledge of how to use CAD is required.

The welder then teaches the robot the positions of the welds by clicking a handheld teaching stylus at the desired approach, path and departure points of the weld. They then make sure the robot can reach all the points by pushing the validate button on the interface. The welder can choose whether or not to make any changes to the automatically generated program, and when they are satisfied with the path and torch angles, the program is sent to the robot controller.

Any robot programming process requires fine tuning to achieve the perfect path. With arc welding, the generally accepted rule of thumb is that the weld wire tip must be within half of a wire width of the ideal path of the seam to be welded. The Scalable system makes that easy with its auto-tuning feature.

Because the system knows the geometry of the part and the location of the weld, it can automatically create search paths that use the robot’s built-in weld wire touch sense to accurately locate the part surfaces. It then places the torch tip in the ideal position for that weld type and gives the welder an opportunity to make any changes, if needed.

Often, a weld path will have some uniqueness. For example, one side of the metal may be thicker than the other, which would require the path to be biased slightly toward the thicker metal to even out the heat and ensure good penetration.

In the Scalable interface on the robot teach pendant, the welder can make all the necessary adjustments in an intuitive way without knowledge of robot coordinate systems just by tapping buttons with simple labels like “left” and “right” to adjust a point in the weld seam. A traditional welding robot setup would require those search points to be set up by hand or with an offline programming system and a CAD model.

The welder can then repeat the teach, validate and tune steps to create as many weld seams as needed to complete the part and make a whole part program. And, if repeatable fixturing is being used, the system is ready to run production. If the fixturing or some seams are not repeatable, the Scalable system can be configured to automatically adapt to variations.

If you want to weld on a more ad-hoc basis or in many different places, and throughput is not a concern, a cobot on a cart could be a good solution. However, if you want to run consistent

and fast production and you have some fixturing, a traditional industrial robot in a two-station cell is the best choice. The Scalable product enables this situation by allowing a welder to program and operate an industrial robot with no new skills and has shown to lower the programming time for new parts by about 12 times compared to the traditional pendant-based teach-thru style, which is still the norm for the majority of industrial robots used today.

One additional factor to consider is how long and how much you will run the robot system. When it comes to durability, traditional industrial robots typically are more than 50,000 hours MTBF (mean time between failures), where cobots are in the 20,000-hour range. Some have published different numbers, but the ratio between the two is still about 2.5 times. So, if longevity is part of the ROI, then a Scalable system on an industrial robot provides a valuable advantage.

The best and easiest solution is the combination of a modular robotic welding cell, such as an ABB’s FlexArc, with the Scalable point-and-click teaching system. This combination enables any size manufacturer, even with high-mix, low-volume parts, to easily enter the world of robotic automation with a solid ROI. Small and medium-sized businesses no longer need to hire robot experts or get extensive in-house training to enter the world of robotic welding.

All standard FlexArc cells feature one or two robots and a workpiece positioner. The equipment is all installed on a common platform, providing shorter commissioning times and the ability to easily relocate the cell within the production facility. The cells are equipped with centralized power distribution with all components powered from one source.

For those fabricators that already have ABB robots, the Scalable package can be retrofitted to existing robots, so the investment to gain ease of use can be quite affordable.

For those for whom a cobot is a better option, ABB’s GoFa cobot can work side-by-side with humans, without the need for fences, on a wide range of tasks, including arc welding. It features a customizable two-button, lead-through programming function to tack and weld small parts. By moving the robot in the desired weld path, users can create a weld path which GoFa replicates in a live weld.

Whatever the manufacturer’s particular needs, they now have cost-effective and easy-to-use solutions to increase their productivity with robotic welding without the costs and headaches of extensive training and risk of employee turnover.