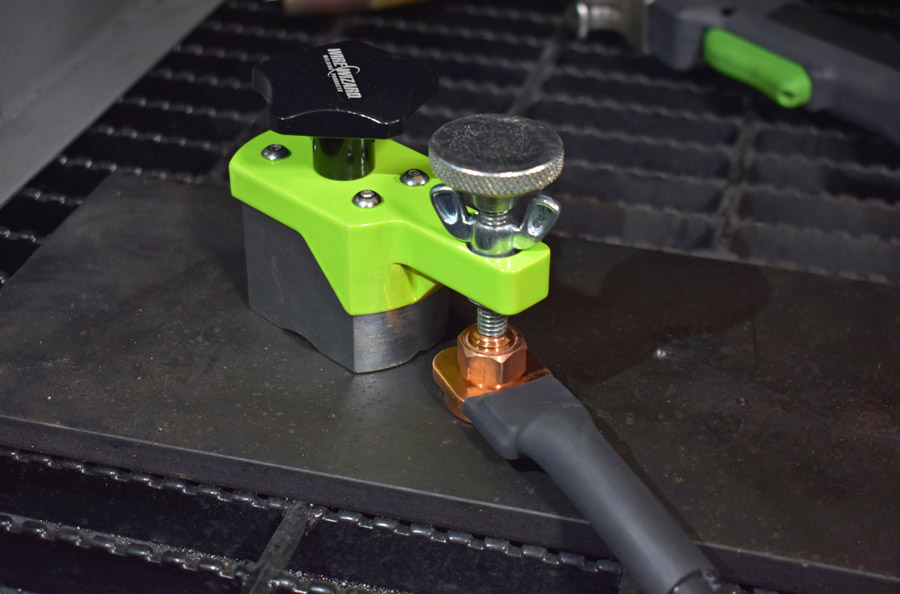 Although considered a mature welding technology, MIG welding systems still offer excellent opportunities for electrical efficiency (EE) optimization. Because the MIG welding process requires the use of high electrical currents to produce structurally sound weldments, even small improvements in the design and construction of the welding system’s secondary loop can significantly improve the EE and overall system performance.

The Powerball Torch System was a significant step forward in MIG welding torch performance. However, the Elco engineering team understood there were other components in the secondary loop that could benefit from electrically optimized copper and invested significant time into the development and testing of components that would minimize electrical resistance.

The secondary loop of a MIG welding system includes all the components of the electrical circuit: power supply, ground cable, ground cable clamp, welding arc, welding wire, torch components, wire feeder and the power cable from the power supply to the wire feeder (see Figure 1). The design, materials used and quality of each component affect the EE and, together, produce a compounding effect on the overall EE of the welding system. The engineering team decided to investigate the welding power cable connection points and the methods used to create them.

Crimping is a widely accepted method for OEM welding power cable lug attachment and for infield cable repairs. The crimping process is accomplished by mechanically compressing a copper sleeved lug connector around the power cable’s bare copper strand bundles. It can be performed with a hammer and screwdriver, a cable crimping anvil or a power crimping machine (see Figure 2).

The quality and performance of a crimped cable lug joint depends on the method used to finish the connection. The conductivity and durability of crimped lug joints can vary greatly. For example, hand crimped lug joints are often the poorest quality. Hand crimping is commonly done with a hammer and chisel, which compresses the lug sleeve into a V-shape, resulting in inconsistent collar pressure around the cable strands (see Figure 3).

Crimped cable connections with insufficient sleeve compression are also subject to cable/sleeve oxidation and corrosion. Cable contamination and the resulting oxidation inside the cable lug sleeve progressively increases electrical resistance at the joint, resulting in a reduced service life of the cable. The EE of a poor quality lug joint degrades quickly when the cable is subjected to the rapid movements and extreme thermo-cycling of robotic weld cells.

Testing and analysis of hammer and anvil crimped lug joints revealed a resistance range of 17 to 50+ micro ohms. This is an acceptable range of resistance for newly crimped power cable joints. However, Elco’s testing showed that crimped lug joints were subject to mechanical and electrical deterioration in a short period of time. Crimped lugs start to degrade from their original resistance values quickly and progressively deteriorate throughout the cable’s service life (see Figure 4).

To understand the causes of crimped lug joint degradation, it is important to consider the material properties of the welding cable and lug. Welding cables and lugs are typically made of soft copper.

Copper is widely accepted as the best commercial material for efficient electrical power transmission in MIG welding cables. High-capacity welding cables are typically made with thousands of small-diameter wire strands ranging from 160 microns to 240 microns. A crimped copper lug collar is compressed around bare copper strands producing a stable mechanical cable connection. However, when the crimping compression force is released, the copper sleeve incrementally relaxes, resulting in a less secure joint.

This phenomenon is referred to as “compression creep.” Compression creep begins immediately after the crimping force is removed and continues incrementally over the life of the joint. Welding cables experience extreme temperature cycles during the welding process. These extreme temperature changes cause the copper wire strands and lug collar to anneal and become more ductile. An annealed power cable lug joint has reduced compression retaining properties, which further increases the electrical resistance of the joint over time.

To the naked eye, the cross section view of a welding power cable reveals what appears to be a densely packed bundle of copper wire strands forming a highly effective current path.

However, when inspected at a microscopic level, the intricacies of the wire strands and the crimped lug joint reveal a much more complicated story.

A microscopic cross-section view of a copper wire strand reveals an irregularly shaped oval with high and low points along the length of the wire strand. Crimped lug joints compress the wire strands together, but the cable strand compression is inconsistent within the joint. Even under high compression, the irregularities of the wire strands do not make perfect contact with the surrounding wire strands. The irregular contact areas constrict current flow, which increases resistance and results in excessive heat buildup in the cable or lug joint. Irregular crimping pressure also allows air spaces between the strands and traps wire contamination inside the joint (see Figure 5).

The air spaces between the wire strands represent areas where the wire strands are not contacting the other strands consistently, creating isolated electrical current paths, which inhibit the current flow and increase resistance. Air spaces and wire strand contamination are the ingredients for joint oxidation and increased resistance over the life of the welding cable.

Ultrasonic metal welding is an industrial process that utilizes high-frequency vibrations that are locally applied to separate parts under pressure with the purpose of creating a single solid-state joint. When a power cable lug joint is ultrasonically welded, the individual wire strands of the power cable are consolidated into a quasi-solid bundle and bonded to a billet copper lug (see Figure 6).

The footprint of an ultrasonically welded lug joint is smaller and more compact than traditionally crimped cable joints (see Figure 7). Smaller lug joints can be a significant advantage when routing cables through limited spaces.

Several welding cables with ultrasonically welded lug joints were installed on a controlled weld cell and tested under high current loads. Approximately 100, 100-percent duty cycle (10 min. each) welds were produced in the current range of 250 A to 450 A. The weld characteristics, welding gun temperatures and cable lug joint resistance were monitored and recorded in real time. The tests were conducted with a 75/25 and 90/10 argon/CO2 shielding gas mixture, using 0.045-in. steel wire. The tests revealed the ultrasonically welded cable lug joint process capability (Cpk) had improved significantly when compared to previous studies using crimped cable lug joints under similar weld parameters.

In one study, the Cpk improved from an already acceptable value of 1.42 with a freshly crimped lug joint to an even better value of 1.98. The welding gun cable joints, which also utilized the ultrasonically welded process, resulted in a torch handle temperature reduction of 30-degrees F when compared to gun handles utilizing crimped cable joints.

When systematically tested and analyzed, it is clear that traditionally crimped welding power cable lug joint quality is inconsistent and can be a major contributing factor to excessive electrical resistance within a MIG secondary loop. Crimped lug connections are subject to significant performance degradation over the life of the cable. 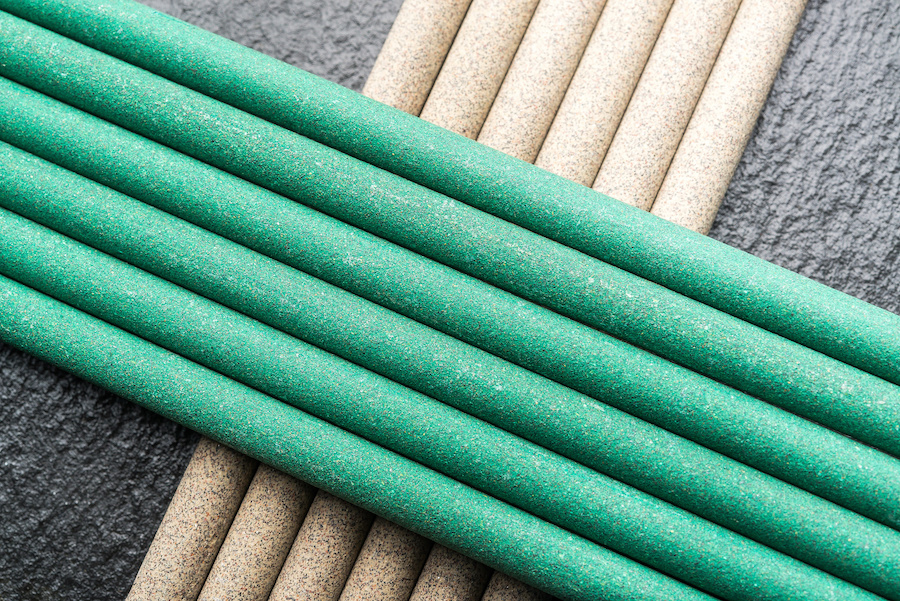 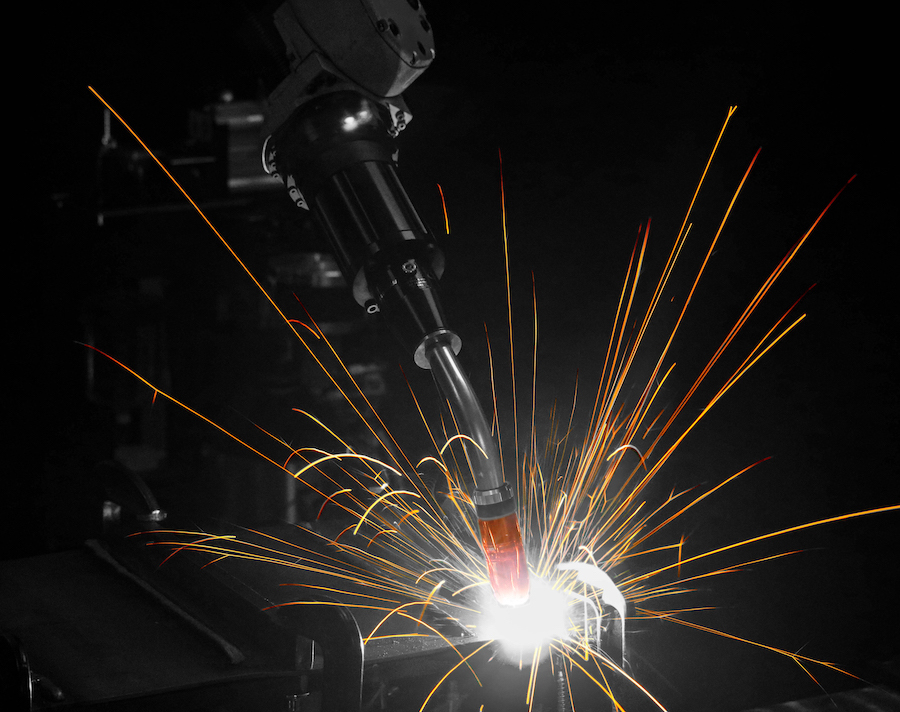 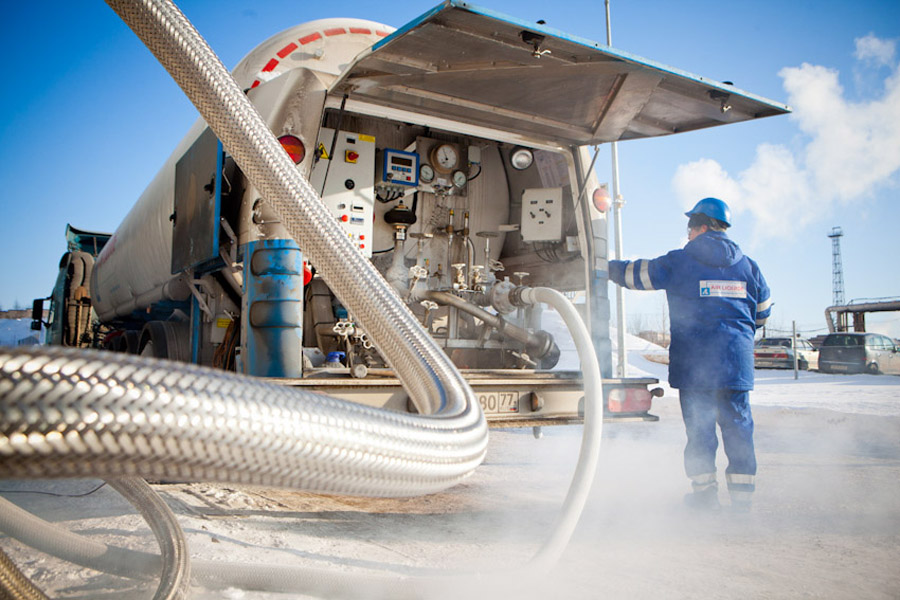