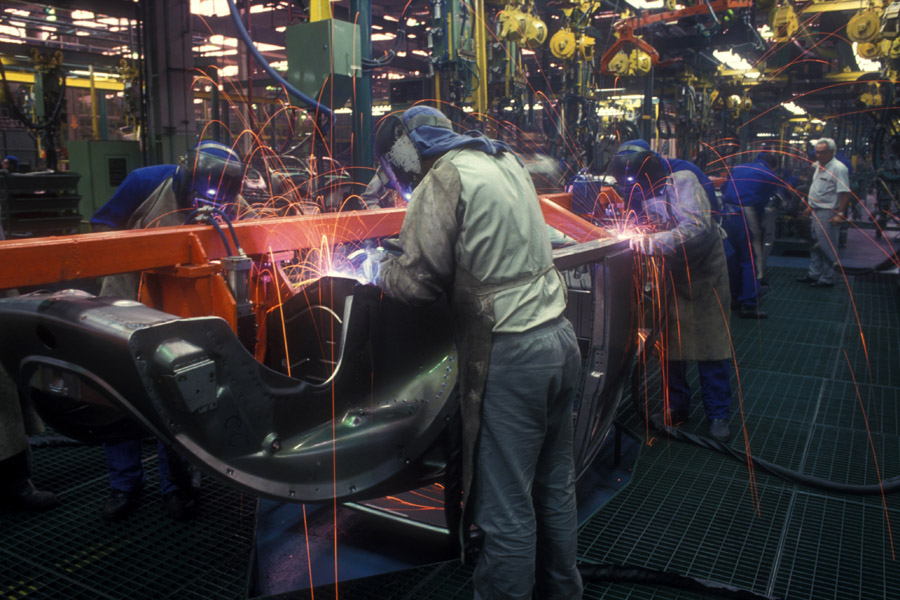 Resistance welding doesn’t generate the same type and volume of fumes as MIG welding applications. But that doesn’t mean manufacturers relying on resistance welding are off the hook when it comes to air quality control. 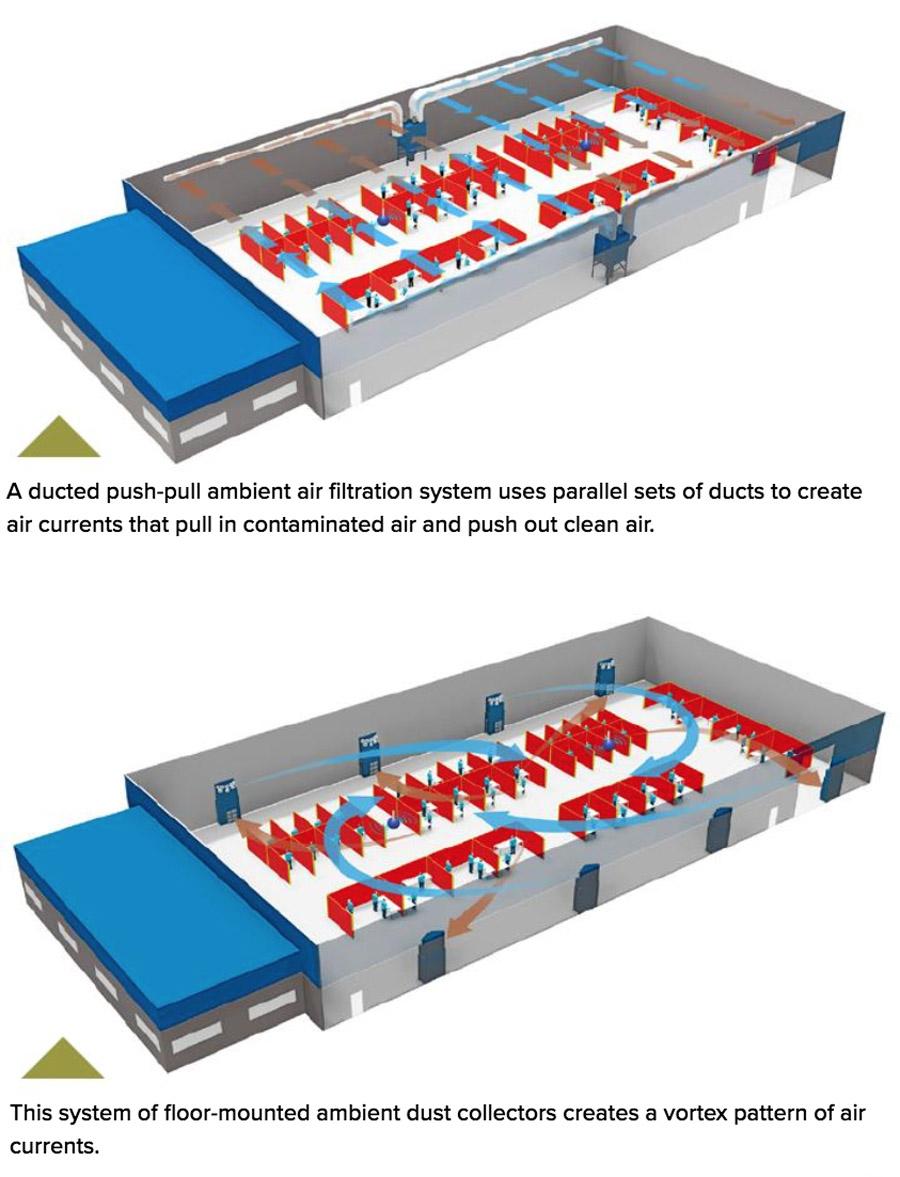 Electric resistance welding – which includes resistance spot welding, seam welding and flash welding – uses heat generated by an electric current to weld two or more overlapping or adjoining pieces of metal together. While most other forms of welding use consumables such as welding wire or rod to form a weld seam, resistance welding simply melts the edges of the pieces being joined.

Resistance welding is most commonly used to join thinner pieces of metal. It has a large and growing role in the automotive industry as well as in defense, consumer electronics, marine products, construction and building materials, agricultural equipment, energy and more.

Because it does not rely on the consumables that are responsible for a majority of the weld fumes created by MIG and similar welding applications, resistance welding is generally thought of as a cleaner and safer process. And for the most part, that’s correct – resistance welding generates significantly fewer fumes and toxic particulates compared to MIG welding.

However, that does not mean manufacturers do not need to worry about air quality. In a high-production environment such as automotive manufacturing, even the small amounts of fumes generated with each weld add up. If you’re using high-speed robotic processes, this can result in a noticeable effect on air quality over the course of a shift. And even if the fumes are not visible to the eye, they can still have an impact on human health.

Often, the biggest source of smoke and fumes from resistance welding is not from the metal itself but from coatings, lubricants, sealants and adhesives. These can include lubricants used in press forming processes prior to welding, corrosion-resistant coatings and epoxy-based resins. Each of these has significant health risks, such as:

Manufacturers engaged in high-production resistance welding have three basic options when it comes to weld fume control: capture it at the source, blow it out the roof or filter air throughout the facility.

Source capture is the most cost-effective option for applications that can be easily enclosed or where all welding happens within a contained area. Robotic welding of smaller parts can usually be contained under a hood that is then connected to an individual dust collector or a large centralized dust collection system. Bench-scale applications can often be controlled with fume arms ducted to a centralized system.

However, fume guns often used for manual MIG welding are not an option. Similarly, robotic tip extraction methods are not effective for robotic resistance welding. This is because most of the fumes from resistance welding come from coatings and lubricants on the metal, which will continue to smoke after the tip extractor has moved to a different area of the part.

Exhaust- and makeup-air ventilation systems are a popular solution for resistance welding applications that cannot be hooded or enclosed. These systems rely on large fans to pull contaminated air out of the facility. Fresh air from the outside must then be brought in to replace the air that is blown out. If the metal being welded is relatively clean and does not produce much smoke, or if production is fairly light, this is a simple and inexpensive solution to keep exposure to toxic elements within OSHA permissible exposure limits (PELs).

However, if your applications are producing significant smoke, the fans will need to move air at a faster rate to keep up with it. If you are heating or cooling your facility, this can significantly raise your energy bills over time – much in the same way that running your air conditioner at home with the windows open will cause a noticeable spike on your electric bill. Depending on the volume and composition of the fumes, exhausting contaminated air to the outdoors may also put your facility out of compliance with environmental emissions regulations.

Ambient air filtration systems clean air for the entire facility. These systems pull contaminated air in, filter it and return clean air back to the facility. They may cost more up front than a simple ventilation system, but by keeping conditioned air inside ambient systems generate significant energy savings. They also protect the environment while protecting people, ensuring that facilities are compliant with both OSHA and EPA regulations.

An ambient air filtration system is the best option for facilities engaged in high-production resistance welding of components that cannot be hooded or enclosed. They are an ideal solution for automotive assembly lines and other processes involving robotic resistance welding of large parts.

Facilities have a few options when it comes to ambient air filtration systems for resistance welding. A traditional push-pull ambient system relies on ductwork hooked up to a large centralized duct collector.

Ductwork is set up in parallel lines near the ceiling. One side pushes out filtered air and the other side pulls in contaminated air. This creates air patterns in the facility that continually pull contaminated air up and away from workers. A ducted push-pull system is usually the most energy efficiency ambient solution. It also minimizes the number of duct collectors that need to be maintained.

However, ductwork can be expensive to install and difficult to reconfigure if assembly lines are expanded or rearranged. It may also interfere with the use of overhead cranes or other equipment in the facility. A ducted push-pull system is generally best for large facilities that have fume-producing processes throughout and do not change production lines frequently.

When more flexibility is needed, floor-mounted ductless ambient air filtration systems may be the best answer. These systems are easy to set up and move if needs change. They use several smaller duct collectors to set up air currents in the facility that pull dirty air into the collectors. They can be placed at critical points in the facility where fumes from resistance welding are generated.

Floor mounted systems are the easiest way to get started with ambient filtration; they just need to be set up in the right spots and turned on. They also offer maximum flexibility for manufacturers that anticipate making frequent changes to production lines.

Manufacturers that want to skip the ductwork while conserving floor space also have a newer option: ductless ceiling-mounted air filtration units. For example, the RoboVent Vista360 uses a series of dust collectors mounted near the ceiling to create airflow patterns similar to a traditional ducted push-pull system. This is a great solution for facilities that are tight on floor space but want to avoid ducts due to overhead cranes or a need for greater flexibility. 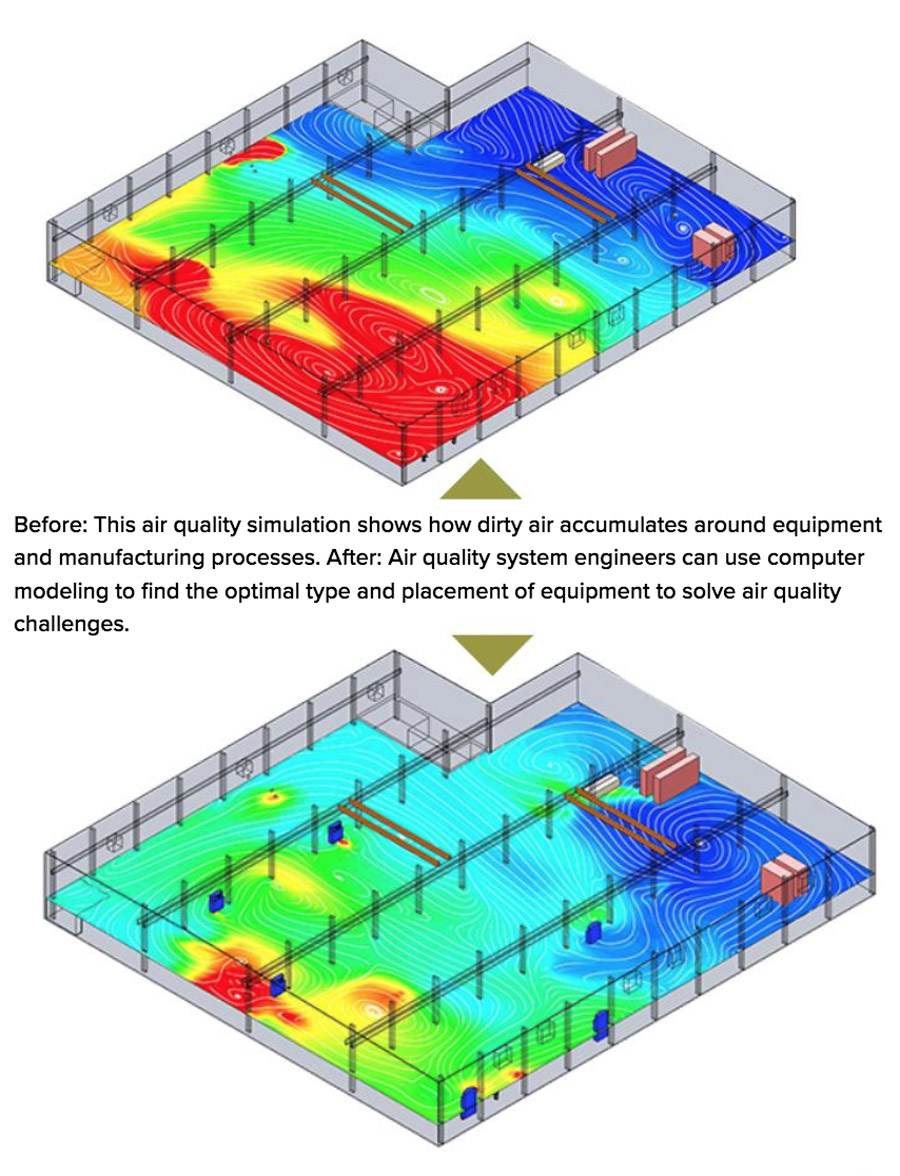 Computer modeling can help manufacturers make sense of it all and find the right solution for their unique circumstances. Air quality system designers start by analyzing the facility and evaluating air quality at different points in the building. Then, they use computer modeling to create a virtual simulation of the facility and fume producing processes, including airflow patterns and current air quality readings.

This allows them to try different solutions and determine which one is most effective and cost-efficient. Using computer models allows system designers to avoid over- or under-engineering the solution, so manufacturers can determine which design will meet their air quality goals for the lowest total cost of ownership.