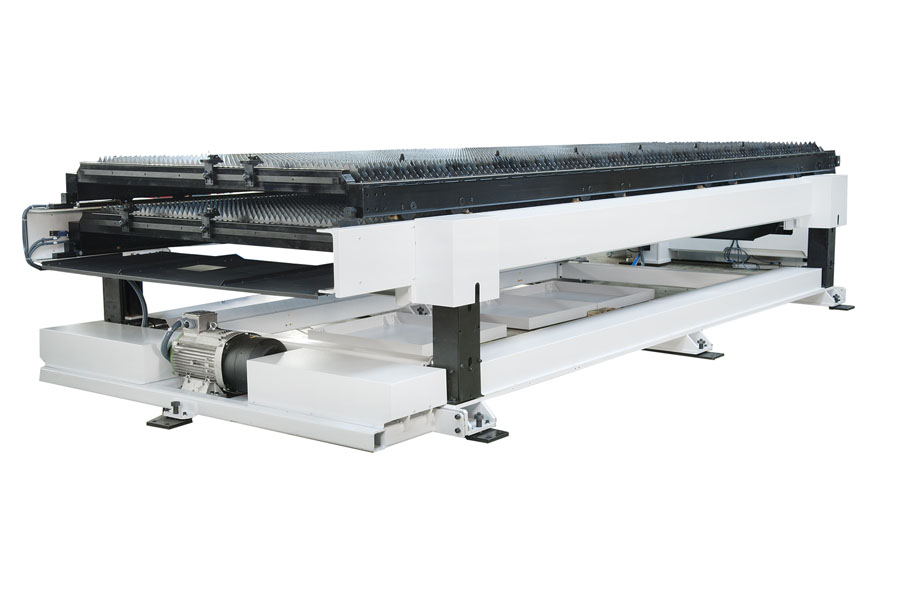 For decades, hydraulic systems have been a major part of the manufacturing process. The theory behind hydraulic power dates all the way back to the 1600s when physicist and mathematician Blaise Pascal laid the groundwork with Pascal’s Law, which established a principle in fluid mechanics that pressure exerted anywhere in a confined incompressible fluid is transmitted equally in all directions throughout the fluid such that the pressure variations (initial differences) remain the same. That principle eventually led to Joseph Bramah patenting the first hydraulic press in 1795.

Despite all the advancements in electric motors, there are still some jobs that only hydraulic systems can manage. However, it’s becoming clear to those working in the average job shop that electric motors provide clear-cut advantages over hydraulics.

The weight of hydraulics

Consider everything that goes into a modern hydraulic system used in manufacturing today: pumps, control valves, pressure relief valves and regulators, fuses, actuators, brakes, reservoirs, accumulators, fluid, filters, tubes, hoses, pipes, and the seals and fittings that keep everything contained. These are all parts and consumables that need to be replaced, repaired and maintained on a regular basis.

Given all these components, hydraulic equipment is often quite heavy, requiring more than one mechanic to perform maintenance on the equipment at any given time. These weight considerations also impact the amount of materials a manufacturer can load onto a workstation. Floor space is also a consideration when using hydraulic systems.

Some of the most common mistakes made regarding hydraulic maintenance include changing oil and filters. Oil degrades and depletes over time, and the many variables that affect the rate at which this happens further complicate the issue. This makes it difficult to determine when a change is required. A thorough analysis of the oil is often the only way to determine when it should be replaced. To compound the situation, oil prices fluctuate, as well.

Similarly, filters also pose a maintenance issue. Changing them too early means overspending on consumables, but getting to them too late could mean compromising the integrity of nearly every component in the hydraulic system.

An overheating engine is often the telltale sign that the equipment operator needs to shut down and take stock of the situation, yet running too hot is a commonly overlooked issue where hydraulic systems are concerned. Furthermore, using oil with the wrong viscosity index can also pose a major threat to the integrity of the hydraulic system.

Finally, ignoring proper initial startup procedures can lead to damaged components because hydraulic components are not self-priming nor self-lubricating, a fact of which some operators are unaware.

While the use of electric motors in manufacturing and material handling isn’t new, advancements in the power generated from motors is making them a stronger competitor against hydraulic systems.

JT Messer, a former mechanic, engineer and current regional sales manager for JMT USA, has a mechanical background with experience servicing a number of different laser-based machines. He’s also familiar with hydraulic systems having been a heavy equipment mechanic for the railroad. His company is currently prototyping a new material handling system that uses electric motors instead of hydraulics.

While servicing machinery as a mechanic, Messer saw filters that owners neglected to change for two or three years when they were supposed to be switched out every six months to a year, maximum. He says JMT is always looking at where the biggest mistakes occur, and as experience tells him, it’s almost always the end user. Misuse of hydraulic systems means money is being “thrown away” as repairs and maintenance are very costly. 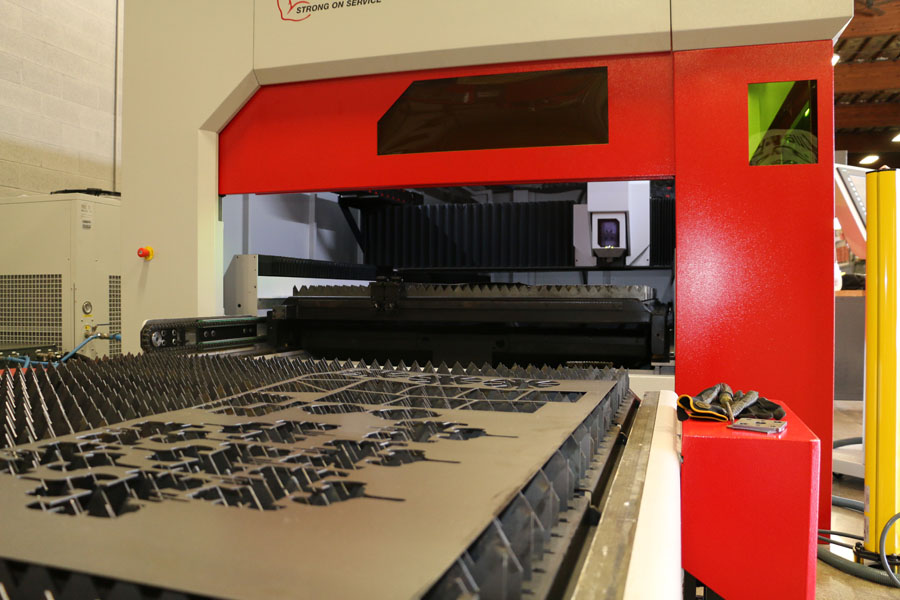 JMT USA’s material handling system has two tables powered by electric motors that alternately transfer material in and out of the laser machine.

“We went back and said ‘how can we eliminate this issue and how can we save money doing it?’” Messer says of JMT’s focus on electric motors for handling materials. “You cut back on the maintenance cost by up to 90 percent because you don’t have to worry about O-rings leaking, changing the oil, changing the filter or anything. All you’re doing is changing two electric wires and that’s it.” 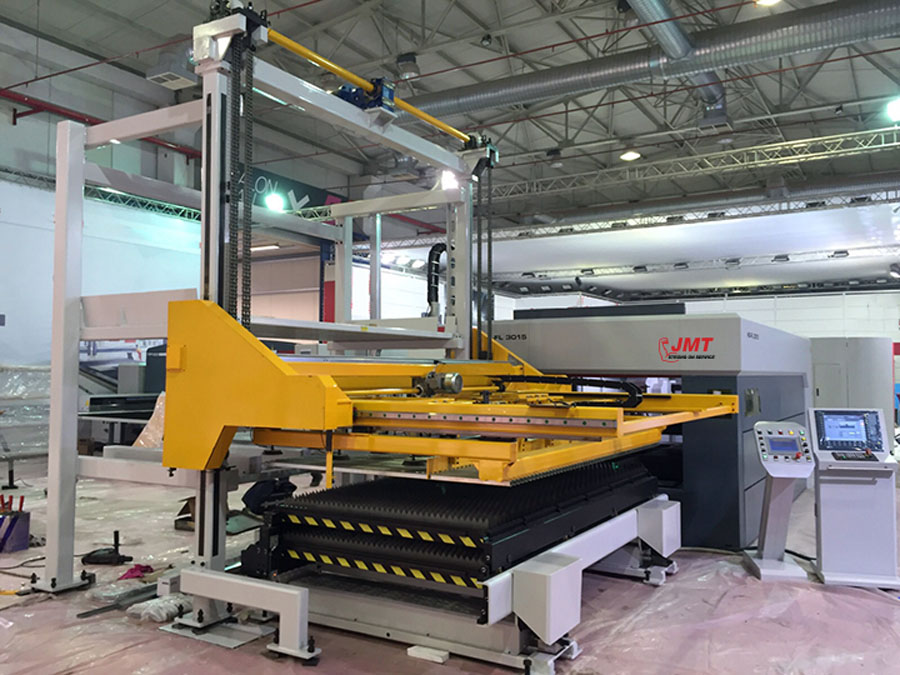 Messer says a big concern for manufacturers is weight per square foot regarding equipment on the shop floor. For instance, for every hydraulic system on the floor, there are hoses, bulky cylinders and other equipment to take into account. When an electric motor is brought in, the hoses, cylinders and associated heavy equipment are switched out for simple wiring, which “gives the user bigger sheet count capability,” meaning, they trade the weight they would normally have in hydraulic systems for more materials to run through their machines, whether it’s a press brake, welder or laser workstation.

Weight is also an issue when it comes to performing maintenance. Messer says it’s not unusual for a hydraulic maintenance job to require two mechanics due to the sheer weight of the equipment. An electric system requires little to no maintenance, and when it does, the parts are light (aside from the actual motor).

“We’re cutting weights of cylinders and motors by half,” Messer says of electric loading and unloading systems compared to hydraulic systems, which have at minimum two housing components and typically four or more. “I remember changing hydraulic cylinders and it taking two people to lift it, whereas with electric actuators, it typically takes one person.”

Hydraulic systems, especially ones built in the 1990s and earlier, have motors that are constantly running to supply pressure to the hydraulic system. Accumulators are also used to assist with the excess pressure. They, however, use and consume power constantly. Newer hydraulic systems, Messer says, use a smart motor that helps to cut the amount of power being used, but they still use more power than electric motors.

“If electric motors aren’t in use,” Messer explains, “they’re completely off. They can be started and up and running at full power in nanoseconds.”

One of the biggest selling points for any type of machine, whether you’re talking fiber lasers over CO2 lasers or the electric press brake over the hydraulic press brake, is maintenance, Messer says. Oil, filters – all the consumables that make a hydraulic piece of equipment run – cost money. None of that exists in electric motor machinery, aside from a few wires or the lubrication for the moving surface parts of the equipment.

“You’re just making sure your motor pulleys and chains are lubricated,” he explains of maintaining electric motors. “That’s about it.”

“Quarter inch, 1/2-in. and 1-in. steel plates,” Messer says, “we have no problem with. It’s just those heavier capacities … it’s not cost effective because you would be overloading motors and consuming too much power to move that kind of metal.

JMT is currently calling its new all-electric motor material handling system the “electric actuation system.” It will have a trademarked name when it hits the market in the United States, but many of the specs are currently being held close to the chest as the prototype is developed in Turkey. It debuts this summer at a trade show in Europe and will make its way to JMT’s facility in Utah for demonstration later this year.

Messer says everybody in manufacturing rides the same wave when it comes to innovation, which includes investing more time and energy in electric motors for material handling systems. JMT, however, is doing things a little different.

“Most manufacturers are still using the hydraulic lift system on their table change,” he says. “We’re an all-electric table change – it’s a standard feature, not an upgrade.”