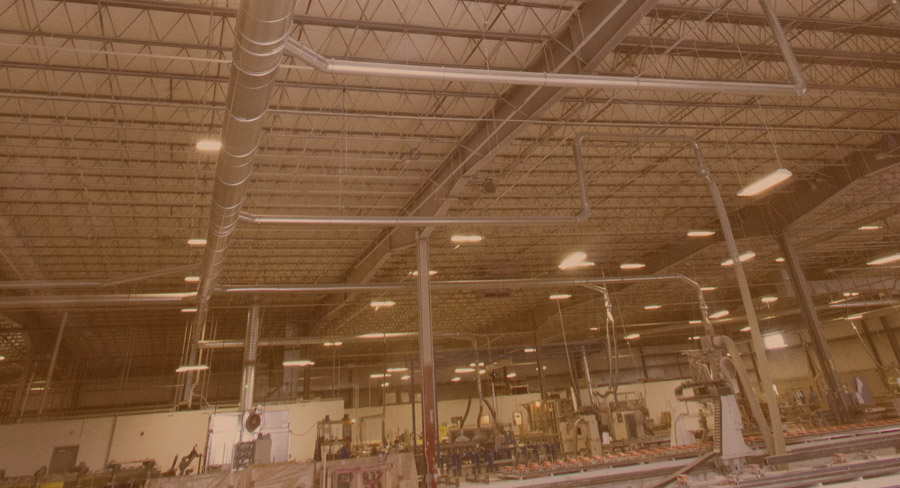 Ductwork is the key to all ventilation and air filtration systems, the means for moving air and airborne hazards away from the work area. Whether your dust and fume collection system is close capture or ambient, the ductwork makes sure clean air goes where you want it and dirty air goes away from where you don’t want it.

If you read a book or article on ductwork, however, you’re likely to run into a bunch of confusing formulas that will make your head spin. Fortunately, system designers can make sense of these complicated calculations. For most, though, it’s worth knowing what they’re calculating and why. This helps you understand how your ductwork does its job and can help you troubleshoot if something goes wrong.

Most of you have heard about athletes who put in extra training to handle events at high altitude. And there are those people who live in places like Arizona who don’t mind the heat because, as they say, “it’s a dry heat.” Just as altitude, temperature and humidity can have a big impact on athletes and folks that visit warmer climates, they are also serious factors when designing a dust and fume collection system.

There is actually a “standard” air that’s used for general calculations. At standard conditions, air has a temperature of 70 degrees F, 14.696 lbs. per sq. in. of pressure and 0.075 lbs. per cubic ft. of density.

When designing a system that moves air, one of the most basic measurements is how much air it will move and how fast, which is measured in cubic ft. per min. (CFM). Unfortunately, making those calculations isn’t that cut and dry. That’s because there’s the standard CFM (SCFM) and the actual CFM (ACFM) and unless you happen to be in a location where standard air conditions always apply, it’s the ACFM you’re looking for.

The performance of the fans that move air through an air quality control system is affected by temperature, humidity and altitude. Fan manufacturers can make these calculations, but only if you give them accurate information. If your manufacturing operations or your local area has drastic swings in temperature or humidity, the fan manufacturer and system designer need to know this.

The equations for calculating dimensions and airflow for ductwork can be fairly complicated. However, there are three basic measurements you should understand: static pressure, velocity pressure and total pressure.

Velocity pressure (VP) is the amount of pressure needed to move the air through the ductwork at a certain velocity. It can also be called dynamic pressure. This pressure is created by moving air, which moves from higher to lower pressure. Velocity pressure is exerted because air has mass and inertia, so energy is required to move it or to make it stop moving. Unlike static pressure, VP is always positive (pushing out on the ductwork).

Total pressure (TP) is the combination of static and velocity pressure. It is the total pressure being exerted in the ductwork. The formula is TP = SP + VP. These measurements are often taken with a manometer, which uses a column of water to give readings of pressure. For the formula to work, all the measurements need to be in the same units.

If you have a dust and fume collection system with a differential pressure gauge, it’s measuring the drop in pressure between the dirty and clean air side of your filters. If the drop in pressure is too high, it indicates that the air is being slowed down too much, likely by dirty filters.

If the pressure drop is suddenly very low, it means the air isn’t slowing down much at all, which could mean that you have a leak somewhere. Air, like water, always takes the path of least resistance, so it would rather go through a leak than the filter material.

Before a systems engineer can start designing your dust and fume collection system, they need to have some basic information. The first and most basic is information about the hazard itself: the dust or fumes. The toxicity of a material can be determined by consulting material safety data sheets published by OSHA or other reputable safety organizations.

The systems engineer will need a complete layout of your workspace or building, including all the areas where dust or fumes are being produced and what kind of process is producing them. From there, the systems engineer can sketch out a proposed ductwork system based on the type of system, available space and needs of the individual application. The engineer will also make note of anything that might get in the way of the ductwork or any other concerns, such as installing vents outside of the building for combustible dust safety.

System design calculations start with the hood or air intake farthest away from the fume collector. Required airflow is calculated for this hood as well as the velocity needed to pull the fumes away from that point. At each point where a new branch is added to the dust and fume collection system, the size of the ductwork will change to accommodate the changes in airflow.

Ambient systems, which are also referred to as dilution systems, remove air from the work space to filter it or exhaust it then return clean air to the facility. This dilutes hazardous materials in the air to the point where the air is safe to breathe. These types of systems are often used where there are many sources of dust or fumes in the facility.

For welding, ambient systems might be useful in environments where welding is being done at various places throughout a facility. Often times in these environments, it’s not practical to have a hood at every spot where there are fumes.

A close-capture system is often necessary with hazardous dust or fumes, such as those that produce hexavalent chromium. Because of the health threats, they must be captured at the place where they are generated.

To be effective, a close-capture system must have a properly designed hood at each source of generation. This might be a downdraft on a cutting table or an adjustable fume arm for a welder. A properly designed hood must ensure that airflow (measured in CFM) is sufficient to capture the particulate and move it through the ductwork.

The ideal solution is for a hood to totally enclose the source of the dust or fumes so nothing can escape into the facility. If this isn’t possible, the hood should be located as close to the source as possible. All exhaust hoods work because of a pressure differential: The pressure created inside the ductwork is low enough to pull the nearby air, dust and fumes into the hood because air moves from higher to lower pressure.