When it comes to deburring flat-sheets as well as formed parts, the deburring landscape has changed considerably in a short period of time. Deburring technology has improved as customer needs and expectations have expanded.

“Deburring is quite a bit different than it was just a few years ago,” said Tony McCue, president of AM Machinery Sales Inc., Warminster, Pa. “If you you go back 5 years, 7-years, deburring was nothing more than a machine with an abrasive belt scratching the surface and putting a grain on it. That would be considered deburred back then. Whereas today, that’s all changed.”

Fabricators still face burrs, slag, oxidation problems, scallops and other surface issues These marred surfaces can be caused by improper feed rates, the condition of dies and alignment, shear blade wear and clearances, dross created by lasers and rewelded onto a part’s surface, solidified molten metal slag generated during plasma cutting operations or a host of other issues.

A Modular Edge Treatment System sold by Metal Finish. The modular systems can take a part from a rough surface to a highly polished surface in a continuous process.

Today, the industry that has such deep roots in woodworking’s traditional widebelt sanding technology is full of new technologies for the metal fabrication field that can help solve these problems. Advances in abrasives have led to higher cut rates, longer abrasive life and more consistent finishes. Interchangeable heads, replaceable brush bristles, adjustable drums and other ease-of-use capabilities are becoming more common place. Fabricators have new options in combining belts and brushes in individual units and can configure multiple machines into work cells. Variable speed motors are found in many equipment such as top and bottom deburring machines, and cross belt machines that use two counter rotating cross belts that run 90 degrees to the feed belt.

Daniel Dechamps, president of Metal Finish Inc., said that the cutting processes in use today are not leaving burrs as much as they are leaving sharp edges and today’s machines, such as those sold by his Plainville, Ct. company, are focused on edge breaking and edge rounding to eliminate this problem. While these sharp edges can be a health and safety issue, the growing need for paintable parts is as big, or bigger, of a driving force.

“The paintability of parts has more to do with deburring today than ever before,” Dechamps said, adding that sharp edges can affect paint adhesion, especially when hemetal is exposed to environmental conditions such as cold or moisture.. “Now you have customers wanting an ‘XYZ radius’ specification so that the part becomes paintable and won’t corrode.”

Highly polished products are en vogue. One of AM Machinery’s customers was a truck manufacturer famous for its bright, chrome grill on the front of the vehicle. “Three years ago they used to polish that by hand,” McCue said. “We sold them an automatic system that would take the metal from a raw state to a mirror finish, and it had to do it in one minute.” 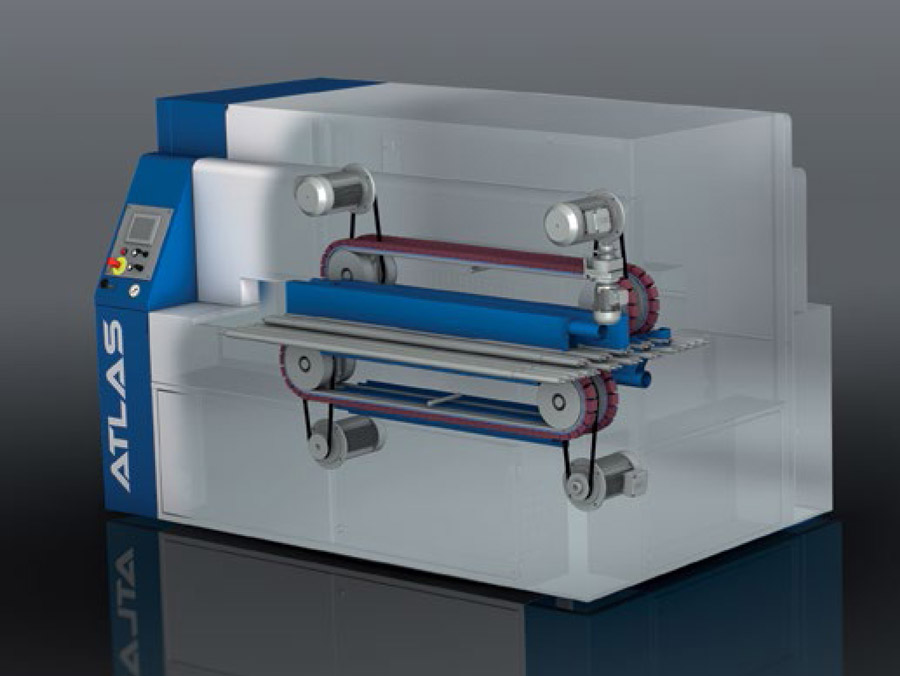 Cross belt brushes on this Atlas edge rounding system from Metal Finish can do edge round both top and bottom or rounding and oxide removal in one pass.

How to choose?
Choosing the machine best suited to your applications requires research and not just of the equipment, but of the fabrication shop themselves and their needs. It may sound like a simplistic question, but a critical concern that needs to be addressed is “what is the desired edge, what constitutes the term “burr free?” That is one place a fabricator should start, said McCue.

Then, there are many other factors to consider. One of the most basic questions to ask is whether to purchase a wet or dry deburring machine, according to a Timesavers’ video on the subject on the company’s web page. According to the Maple Grove, Minn.-based company, wet deburring machines provide a better finish and can extend belt life. With a wet machine, coolant is sprayed onto the workpiece that washes away dust and debris and so no dust collection unit is required. .

Compared to a wet system, a dry machine is less expensive, requires less maintenance, and usually has a longer life span. Dry machines, however, can pose an explosion hazard if dust from aluminum and other metals such as stainless steel mix and so a dry machine must be outfitted with a wet dust collector to mitigate the danger.

Decisions must be made regarding abrasives. Is the fabricator going to use belts, brushes or a combination of them? Multimedia units that features both brushes and belts have become very popular over the years, added McCue. A simple, basic arrangement could have one sanding belt knock down a vertical burr while a second brush removes the burr and radius’ the edge.

How many heads is best suited for your deburring operations? Some parts might require two passes to meet a customer’s surface and edge specification and so it might be better to choose a 3- or 4-head machine, said Dechamps.

Choosing the sanding drums also requires knowledge of the operation and customer needs. The drums are usually made from rubber with specific hardness’ levels ranging from 25 Shore (A) for deburring on up to 85 Shore (A) for slag and heavy stock removal.
Drum diameter can also affect finish. Smaller diameters are more aggressive in deburring while a larger diameter drum provides a better finish. 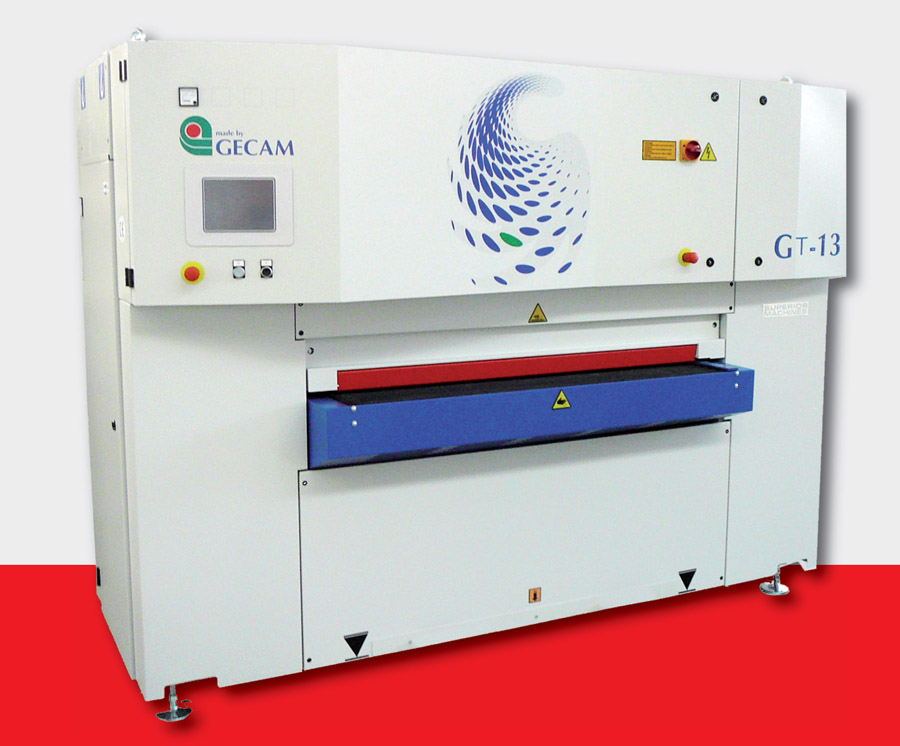 This machine can do top and bottom machining in one pass. It provides full control over the position of both the upper and lower working belt and material thickness setting.

Feeds and speeds
Drum speed also plays a role in deburring and finishing. Each process requires different speeds and feeds, said McCue. A soft drum with the correct abrasive cutting and slow feed rate is good for deburring. While a hard contact, fast-feed rate is good for finishing. This basic concept of feed speeds holds true generally: slow feed rate for deburring, fast for finishing.
To make this process easier, deburring machines today usually feature variable speed options so that fabricators can tune in the best speed and feed for that particular job.

“If you use the wrong abrasives and your spinning is at the wrong speed, the life of your abrasives will go way down,” said McCue. “People for many years have bought machines with a single speed main motor. Not until the 1980s did variable-speed motors start catching on and people began realizing that this technology existed.”

Deciding where to place the machines is also an issue. For instance, in the example above one deburing machine can be run at slow speeds for deburring the material and then a second machine can located behind it and programmed to run at faster speeds to for graining.

Another example might be a laser or plasma cutting operation that might have created oxidation on the metal’s surface. The oxidation, said Dechamps, has to be removed before it is coated or highly polished. A deburring machine can be placed directly after the process to remove the oxidation, deburr the part and prepare its surface for painting.

Metal Finish features a Modular Edge Treatment System that encompasses numerous modular machines that can be set up to break edges, deslag or cut heavy stock, remove oxidation, do extreme edge rounding or several other options. The machines feature a deburring cylinder that is a flexible, soft rubber foam that adapts to the surface of the part. These units can be moved in and out of production depending on the job for continous processing. Other options can be included such as vacuum tables for small parts, magnetic tables for ferritic small parts, dust collectors, and automatic gauge detection.

One of Metal Finish’s customers set up a continuous line that first deburred the stainless steel product with a deburring drum, said Dechamps. Then, the product—a grill spatula that featured an NFL logo—went through a brush station, and then in the third station was grained with a widebelt sander. Finally, it went through two more stations to further smooth the surface and give it an even color. “It was all one continuous operation that eliminating the need for 100 people deburring and polishing the parts by hand,” said Dechamps.

Dechamps said despite advantages to a system such as this, he hasn’t seen a shift toward continuous deburring processing. Instead, the fabrication industry more often is opting for individuall units that can augment their current deburring and sanding capabilities. 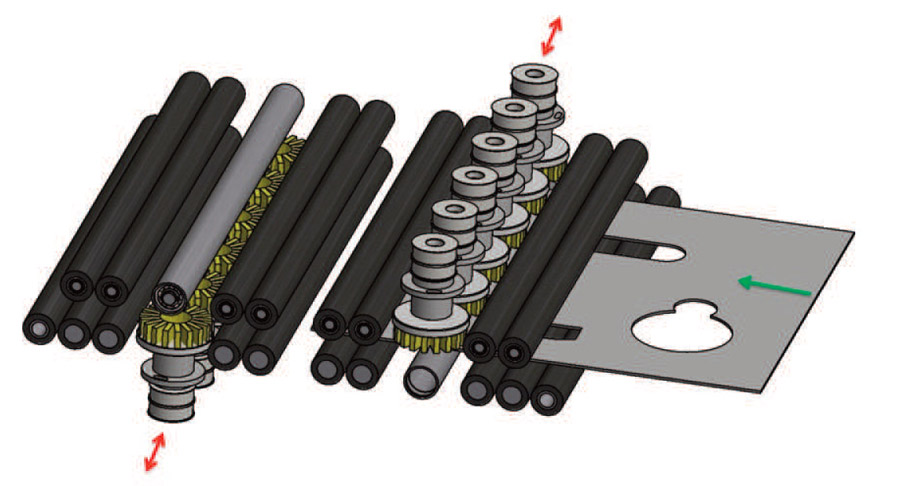 The Loewer DiscMaster SF1/1 utilizes one oscillating disc station from top and one from bottom as pictured.
The machine can do top and bottom processing in one pass.

Cost
One reason for this might be cost, said McCue. “There is so much available technology that, granted, does a good job, but at what cost?” He added that it is not just the initial cost of the machine, but also the cost of operation. How much horsepower does it take to turn a big belt and grind material when a smaller machine might be more cost effective? How quickly does it go through abrasive material?

Essentially, there are trade offs, he said. AM Machinery is importing a new top and bottom machine that can provide small- and mid-sized fabricators an entry into this type of processing.

Joe Amick, manager at AM Machinery Sales, said the new machine, the DiscMaster SF 1-1, is an entry level machine that can do deburring, edge rounding, and oxide removal in one pass. It can be used for laser cut and punched parts, for both flat and 3D formed parts, and be used to debur foil-covered and zinc-coated sheet metal.

Amick said that the machine comes in around $127,000 as compared to higher-end top and bottom models that can start in the $300,000 range and go up from there depending on accessories. The trade off is in robustness and some of the capabilities offered in the higher-end models.

“Loewer (the manufacturer) built a simple, minimalistic machine to produce a reasonable part, but at a vastly superior price point,” Amick said. “It doesn’t have fancy CNC controls, it does not have a whole lot of PLCS or touch screens, and it is not as robust. It has standard switches, knobs and dials. It is very simplistic, and is easy to learn and operate.”