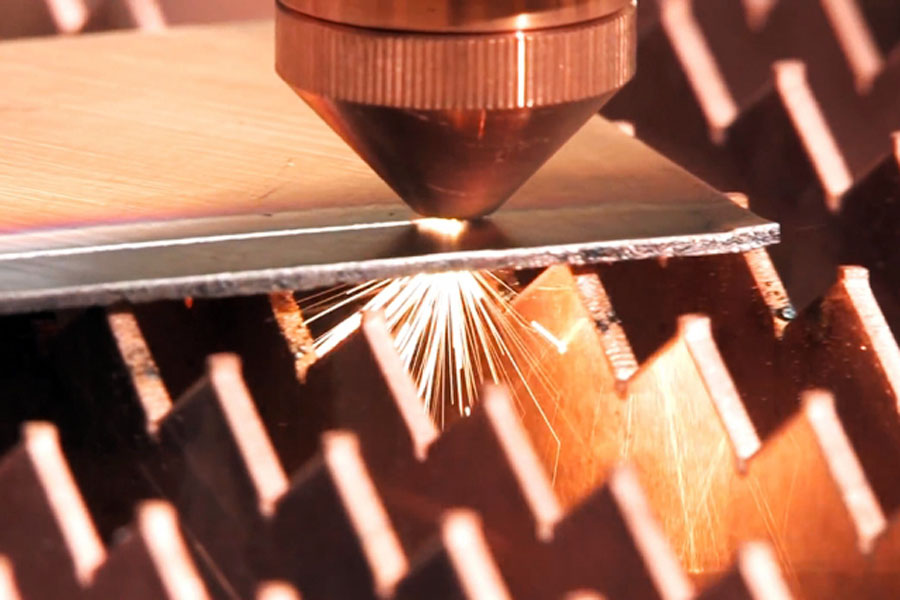 It wasn’t that long ago that direct-diode lasers (DDLs) were only found in devices such as CD and DVD players. In the industrial realm, they were used in heat-treating and cladding type operations, and later found use as an energy pump to boost other laser mediums.

But cutting or welding metals with this solid-state laser technology was the rub. Despite efficiency that can trump related laser technologies by four times, its resulting low power lacked the juice to cut through metal in a meaningful, fabricator-needed way. Achieving requisite power levels to cut through sheet metal could be obtained by combining multiple beams of the individual, low-power diodes, but that required a tradeoff … beam quality. The greater the power, the worse the diode beam degradation. Essentially, the greater the number of laser beams placed side-by-side, the larger the spot and the less the intensity.

But that appears to be changing. More laser equipment manufacturers are developing high-powered diode lasers that can cut through multiple types and thicknesses of metals. A small roster of equipment manufacturers are integrating these technologies into their own equipment. Last fall, at the Fabtech show in Chicago, at least two laser companies showcased their high-powered lasers—TeraDiode and Laserline—and at least two equipment companies showcased direct diode laser-based production equipment. Panasonic displayed a robotic laser system for welding. Mazak introduced a prototype tube-cutting machine. 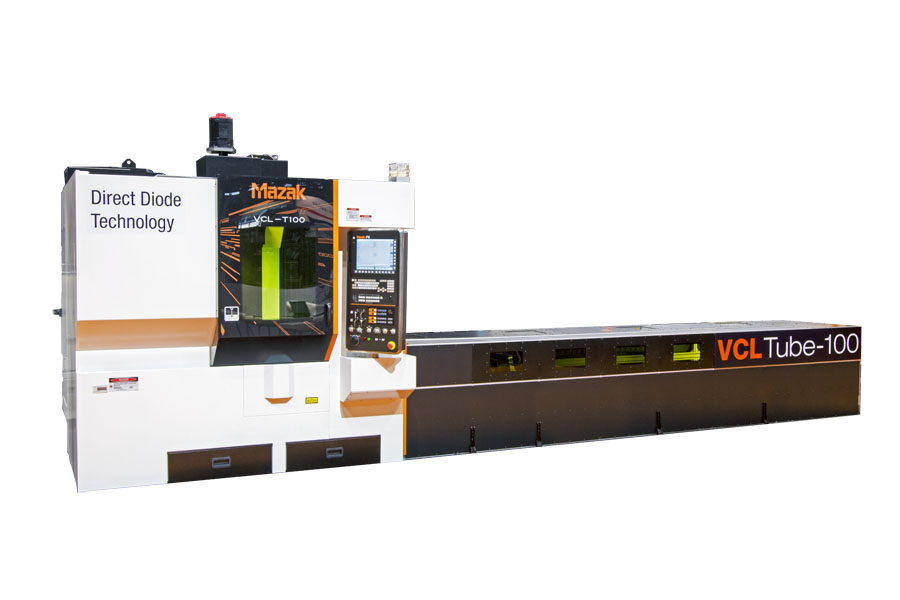 One of the most discussed DDL technologies is from TeraDiode, a Wilmington, MA-based company that spun off from technology developed first at the MIT Lincoln Lab. Bryce Samson, director of business development at TeraDiode, said his company pairs semiconductor diode laser bars, essentially long arrays of diode lasers, with its wavelength beam combining (WBC) technology. By combining the energy from thousands of individual emitters into a single laser beam, the TeraDrive technology can achieve cutting power. With its proprietary WBC technique, TeraDiode can preserve the beam quality needed for cutting and welding applications, said Samson.

WBC also retains the wall-plug efficiency for which DDLs are known. The lasers shipped with wall-plug efficiencies of 40 percent, which, according to the company, surpassed first-generation CO2 and lamp-pumped rod lasers that are approximately 10 percent efficient, as well as a second-generation diode-pumped disk and fiber lasers that are roughly just three times more efficient than its predecessors.

“Basically, what we do is we use a grating inside the laser cavity to have the diodes lasing at a slightly different wavelength and with that element we combine them into one beam,” said Samson. “The beams go through a diffraction grating, which forces the beams into the same direction, superimposing them on one another.”

The million-dollar question though is, “can it cut the sheet metal that fabricator and job shops around the globe use daily?” In this video, TeraDiode demonstrates cutting of 12.7mm mild steel. In terms of speed, Samson points to TeraDiode testing that tends to show faster speeds than other laser types in certain applications, as shown in Figure 1 (page xx). In this example, cutting aluminum using a 1-kW direct diode laser at 970 nm is compared with an industry standard fiber laser with similar beam quality (BPP~2.5mm-mrad). The increase in cutting speed associated with the direct diode laser is twice as fast at a thickness of 1mm. Samson added that other materials show improvements in cutting speed although not as dramatic as the case of aluminum. 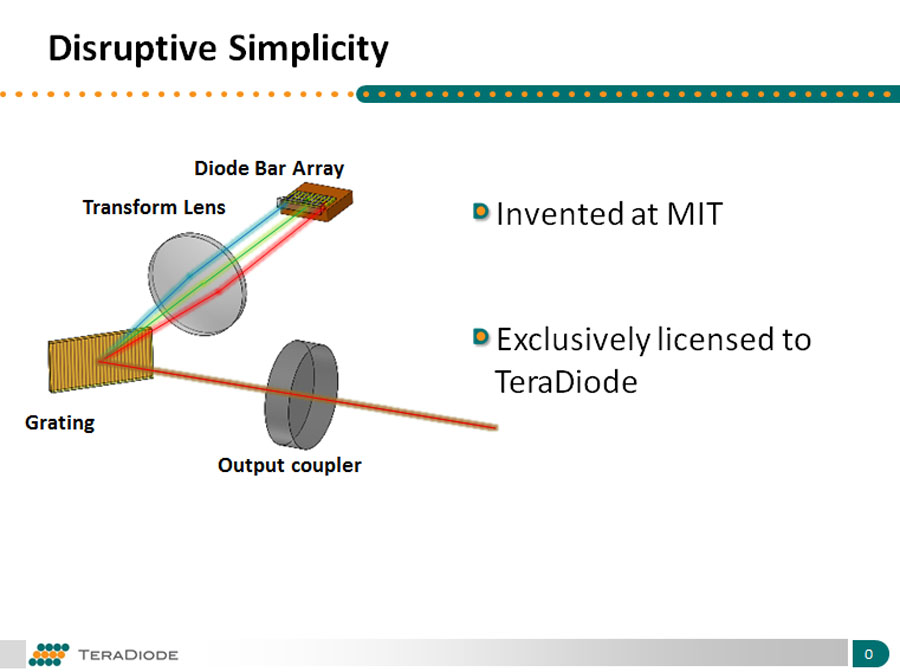 At Fabtech, TeraDiode extended its product roster to include 6- and 8-kW direct diode systems with a beam-parameter-product (BPP) in the range of 6 mm-mrad using 120-µm fiber delivery cable. The BPP value is needed for high-throughput cutting of a range of metal thicknesses. The company also released 1- and 2-kW laser systems with a BPP of 2.5 mm-mrad using a 50-µm fiber. All lasers are offering power conversion efficiencies of 45 percent.

The company also released the continuously variable BPP (CVBPP) feature for its lasers. This optional feature allows the end user to fine tune the BPP delivered on the workpiece, which the company says further enhances edge quality and thickness range for a given laser power. According to Samson, an example of the cutting speed optimization obtained by varying the BPP is shown in Figure 2 (page xx), where a 50 percent increase in cutting speed for stainless steel (6- and 8-mm) is obtained by optimizing the BPP from a 2-kW direct diode laser. Variable BPP from the same laser allows faster cutting speed of thin cross sections to be combined with the process optimization needed for thick materials. 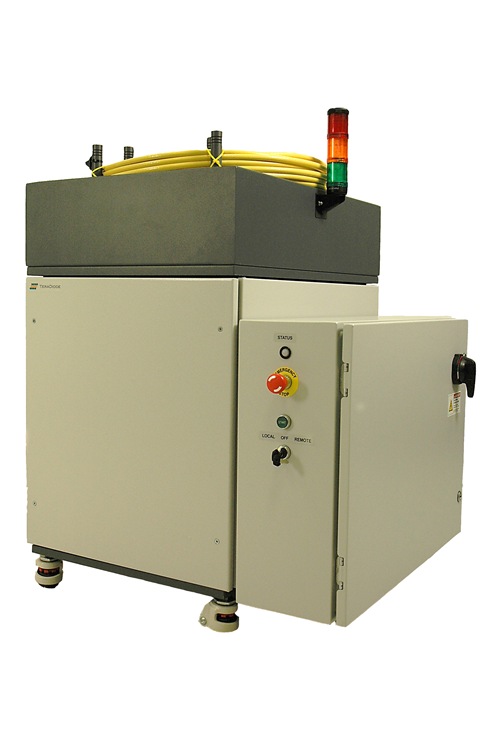 Like TeraDiode, Laserline Inc., Santa Clara, Calif., has made advances to its diode lasers over the years. Wolfgang Todt, vice present of U.S. operations for Laserline, said that diode lasers are now used in cutting applications and are especially advantageous when the same beam source is used for other operations, such as welding and brazing in an automotive body shop.

In terms of welding, the company has found the automotive market particularly good for aluminum welding in body-in-white applications. In one example, galvanized sheets measuring 2.5 mm thick were cut with a 900 W laser, a spot size of 0.44 mm, and the cutting speed of 2.5 m/min with the use of oxygen as a cutting gas. 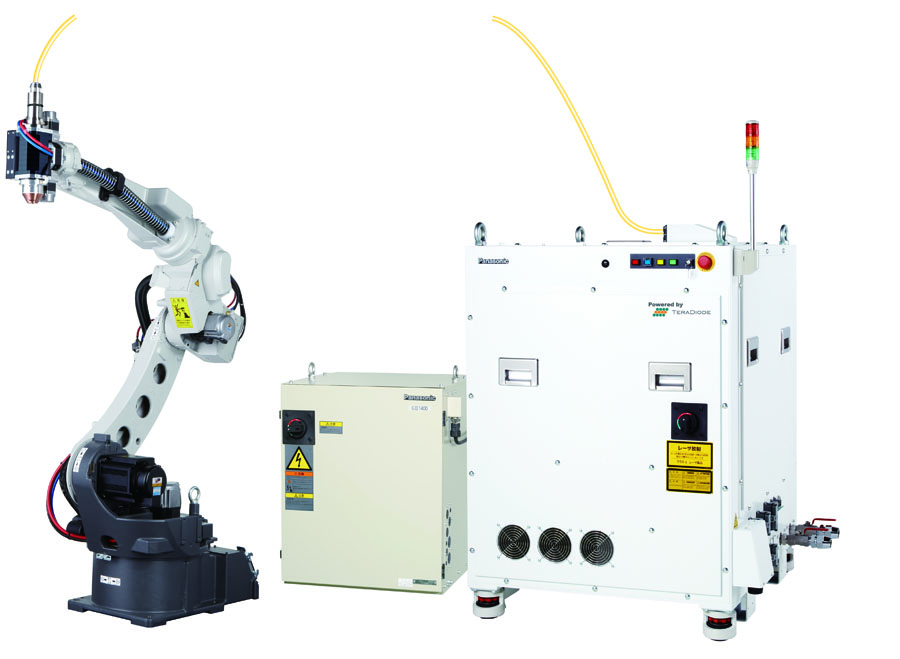 In another case study,available here, the car company Audi used diode lasers to generate a class A weld

At Fabtech, Laserline displayed its new generation of diode laser products, the LDF and LDM. “We have two families of systems that we’re putting out there,” said Todt. “One is called the LDM, which is a 19 in. track that starts from 500 W to 4 kW, which is the highest power density in the market for that kind of space. Then we have the LDF family that starts at 1000 W, and goes up to 50 kW, standard,” said Todt.

Beam quality is a function of the application, adds Todt, explaining the company’s power range. “For cutting, you need a high beam quality, a very, very high beam quality, meaning a little tiny beam that comes out of the laser to very precisely cut the material. For a larger app, or for applications other than cutting, you can get away with regular beam quality. “We’re selling our systems based upon applications and we can sell you the adequate amount of power and beam quality to do the job,” he said. “If you go on a racing track, you would race with a Ferrari. If you plow potatoes out of a field you take a truck; a Ferrari doesn’t really help you. That’s how we compare.” 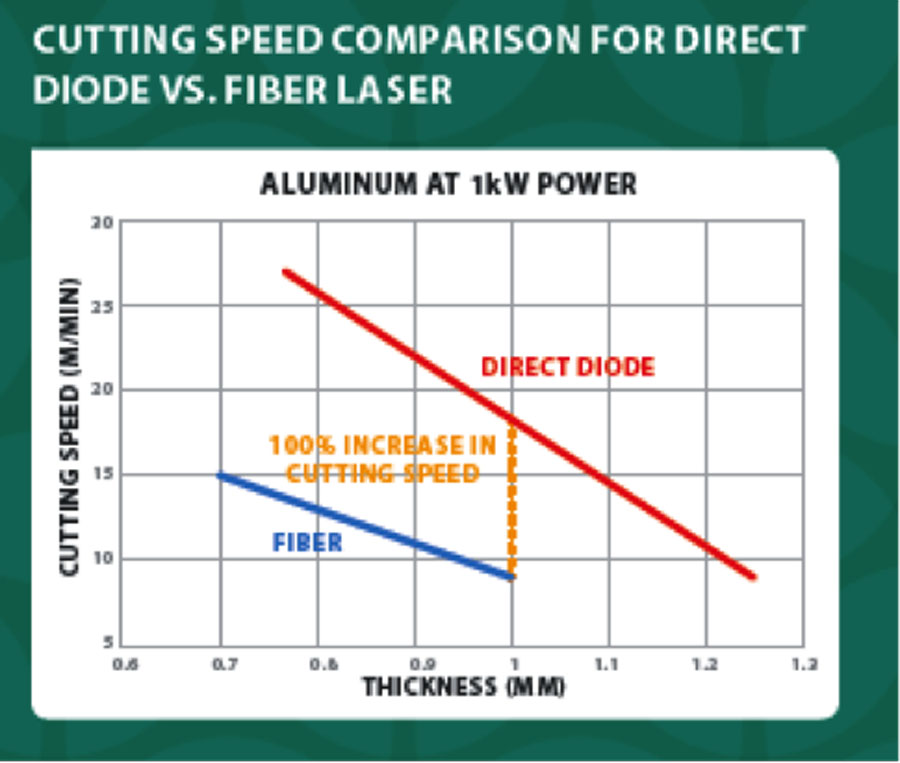 A comparison of the cutting speed of a 1kW direct diode laser and a fiber laser unit. [credit:] TeraDiode.

The LAPRISS uses TeraDiode’s platform. The laser is a 4 kW product delivered with a 100µm output fiber, and a BPP of 3.8mm-mrad. LAPRISS uses Panasonic’s servo technology for controlling the laser trepanning head to generate several welding patterns and beam functions. This makes the laser head compact and light-weight with a payload weight of 4kg, the company said. The low weight allows the laser head to be mounted to high speed, compact Panasonic robots. Because of this, LAPRISS has the potential to replace existing large footprint welding systems with a solution providing high speed, flexibility, and reduced floor space requirements. 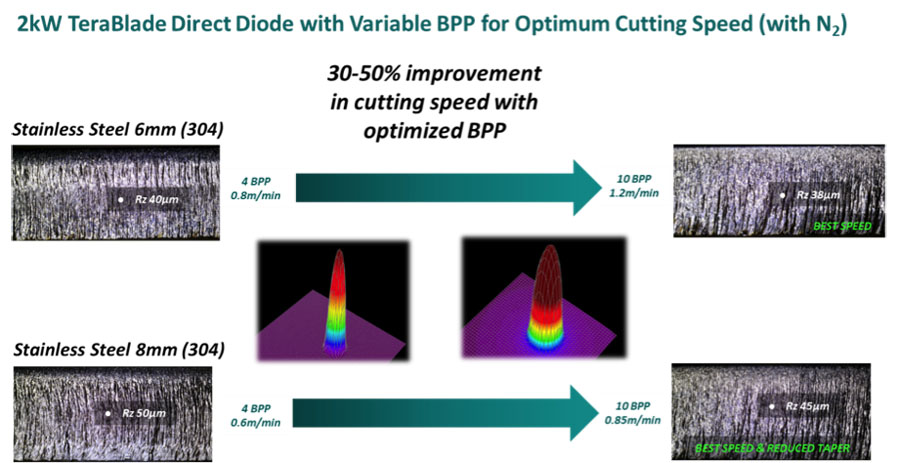 Mazak’s versatile compact laser (VCL) tube 100, built at the company manufacturing campus in Florence, KY, was shown at Fabtech as a demo before its final production release in 2016. The system is for use in cutting low-volume tube and bar components up to 100mm round in diameter and lengths of up to 25 ft.

The VCL series uses a direct diode laser and includes a fiber delivery system. The system was outfitted with 4 kW power for testing. The generator has similar cut performance to fiber generators in mild and stainless steel.

“The cut quality with the diode technology is very similar to fiber,” said Mazak’s David Widlund, regional sales manager. “For steel and stainless steel cutting, they are essentially the same. The direct diode is a little bit different wave length than the fiber and you can cut a little bit faster speeds in your aluminum and some other alloys. The other big difference is your wall plug efficiency is probably about 15 – 20 percent better compared to fiber, so there is cost savings in terms of operational costs.”