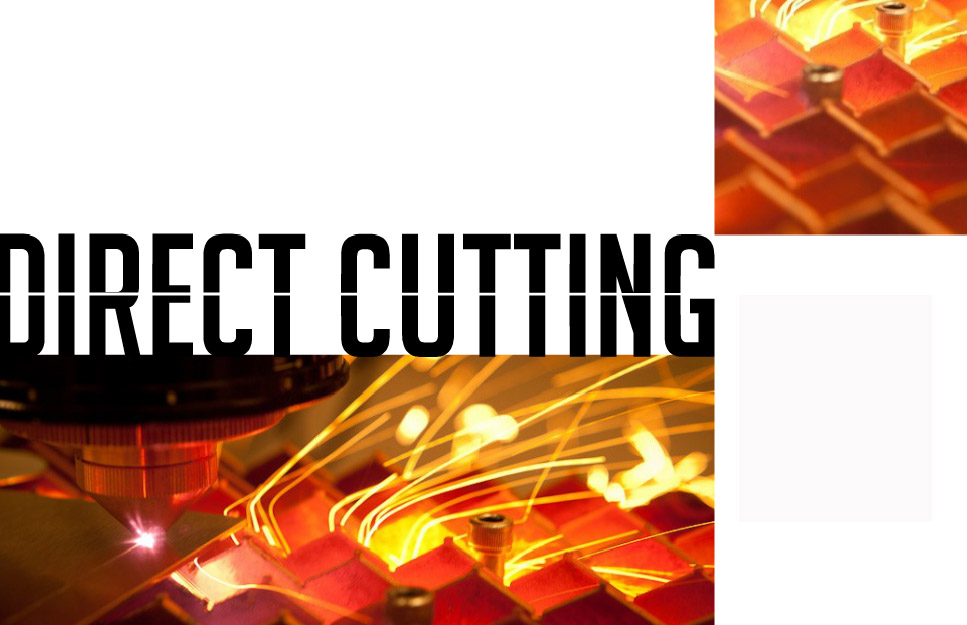 Many consider direct-diode lasers the future of industrial laser metal cutting. Laser experts have long recognized that direct-diode lasers can offer advantages over other laser technologies because of their efficiency, reliability, compactness and low cost. However, applications for direct-diode lasers have been limited because there has always been a trade-off between high power and high beam quality.

Enter TeraDiode Inc., a company that has commercialized high-brightness direct-diode laser technology for metal cutting. TeraDiode has developed the first direct-diode lasers that are bright enough to cut metal while having the highest electrical efficiency available.

Shop Floor Lasers recently spoke with Robin Huang, Ph.D., vice president and a co-founder of TeraDiode, to discuss the TeraDiode technology and its future. Prior to joining TeraDiode in October 2009, Huang was a technical staff member at MIT Lincoln Laboratory. 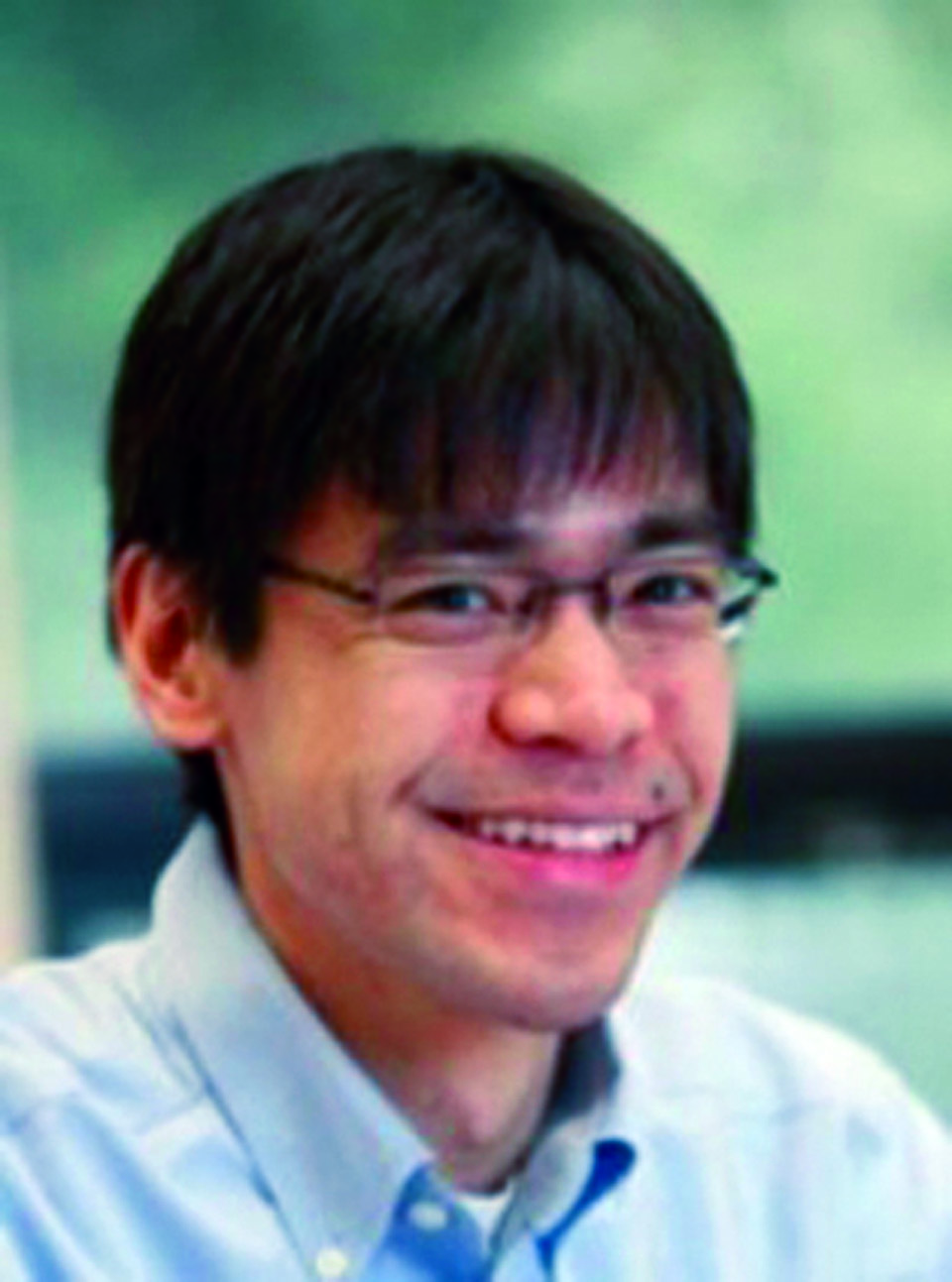 Robin Huang, Ph.D., is the vice president and a co-founder of TeraDiode. Prior to joining TeraDiode, Huang was a technical staff member at MIT Lincoln Laboratory.

Shop Floor Lasers: Why is there a need for direct-diode laser metal cutting?

Huang: For many years, the market was dominated by CO2 lasers, which are large and inefficient. A CO2 laser machine, even at 2 kW or 4 kW, is big. It takes up a huge amount of a room and also requires a lot of water cooling and electricity. It also requires a lot of maintenance to keep replenishing the CO2 gas so there are a variety of operational costs involved. CO2 lasers are considered the first generation of laser technology.

The second generation of laser technology was really heralded by fiber lasers and disc lasers. These are the diode-pumped solid-state lasers that use diode lasers to pump, or excite, the lasing medium. They introduced considerable improvements over CO2 lasers in that they offered fiber coupling as a solution, allowing the user to have flying optics and so forth. The gantry system had a fiber laser attached to it, so you could just bring the fiber to a processing head and then do the work right there. And wall-plug efficiency was improved. CO2 lasers are in the range of 10 percent efficient while fiber and disc lasers are in the 25 to 30 percent range.

SFL: How does the direct-diode laser technology compare?

Huang: We consider the TeraDiode technology to be third-generation technology. It is a new type of solid-state system that is lower in cost, has comparable brightness to fiber and disc lasers, and has a simpler, more robust architecture. We say that it removes the middleman. There is no intermediate solid-state gain medium. We just have these relatively low-cost diodes and the so-called brightness converter. 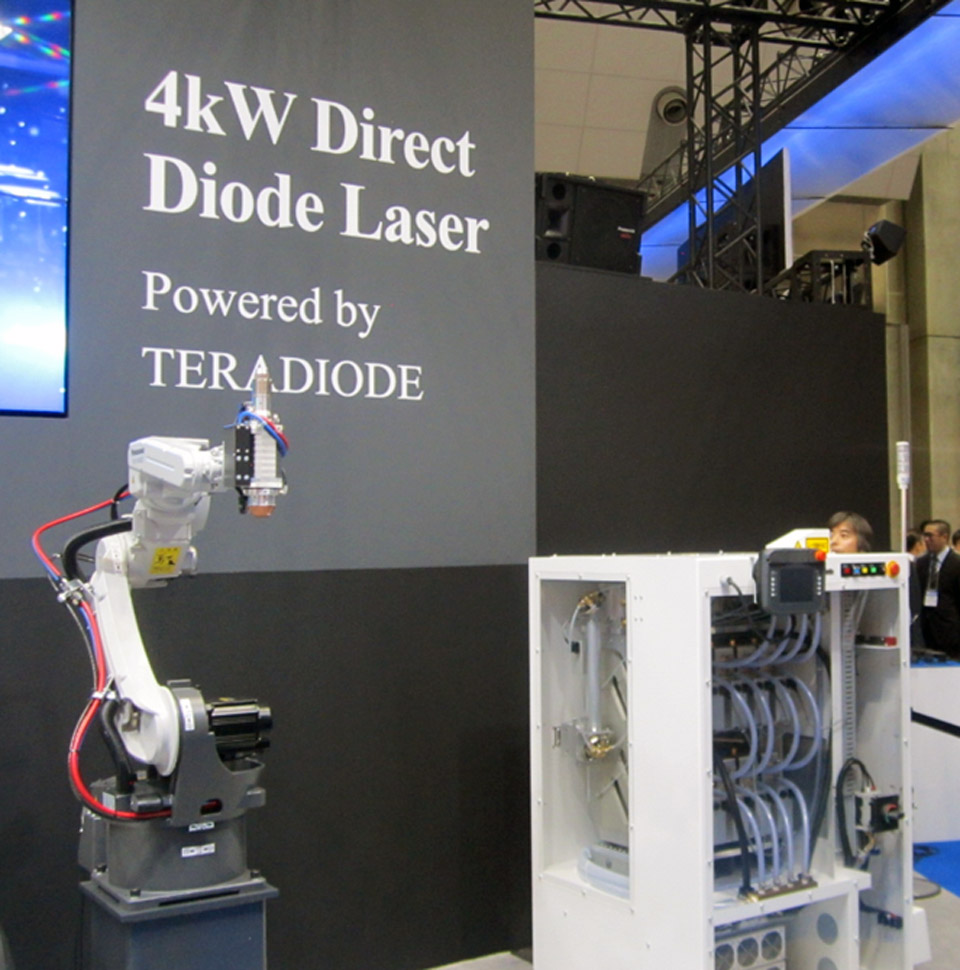 TeraDiode recently announced the signing of a purchase and supply agreement with Panasonic Welding Systems for its 4-kW high brightness TeraBlade laser engines.

SFL: What is a brightness converter and how does it fit into the direct-diode laser technology?

Huang: We use technology that was pioneered at MIT Lincoln Laboratory over the last decade or so that combines multiple laser beams into a single output beam. In layman’s terms, it is something like the Death Star’s ray in Star Wars. Wavelength beam combination (WBC) technology enables the combination of energy from thousands of individual emitters into a single output beam while preserving the beam quality needed for cutting metal.

And it has additional advantages because we can actually build lasers at different wavelengths. That is important because the shorter the wavelength, the more types of metals you can address. Aluminum, for example, has a very strong absorption, which goes to 800 nm, and we can make lasers at that wavelength.

In a traditional direct-diode laser setup, the beam quality degrades when beams are combined. This is because when identical wavelengths combine, they don’t travel in the same direction or merge neatly to produce a small spot size. This becomes more significant as more diodes are ganged together for more power. The TeraDiode technology combines the similar but slightly different wavelengths from an array of diodes into one powerful beam with waves going the same direction and to the same spot. 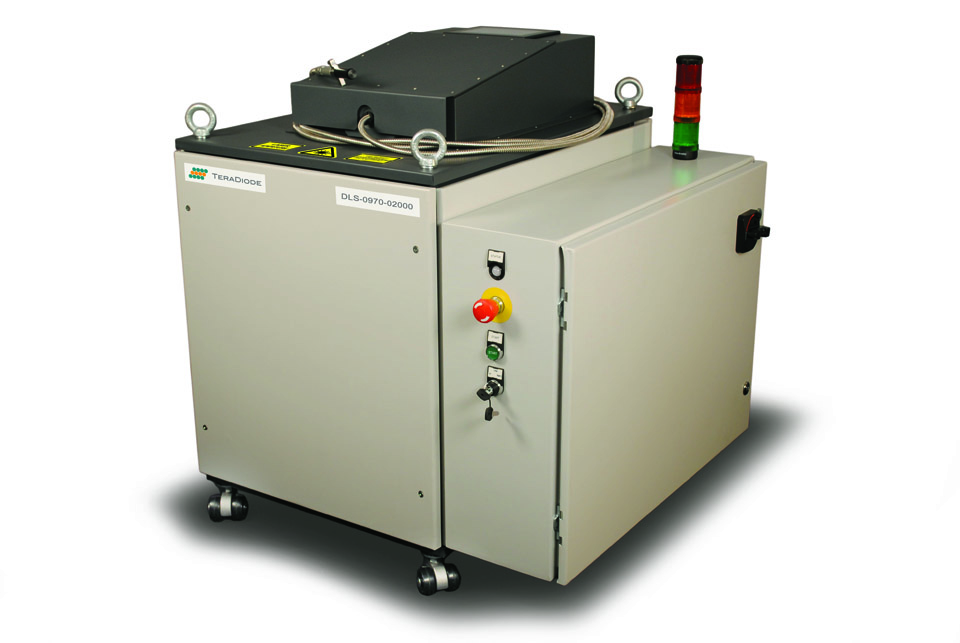 SFL: Are other laser manufacturers working on direct-diode laser cutting?

Huang: Using conventional techniques of diode combining, the best they can do today is not very good brightness. There are many outstanding laser manufacturers out there, but the best they can do are low-brightness applications, such as brazing, heat treating and paint removal. Their penetration into metal cutting has been poor.

To cut metal, you really need extraordinary brightness. In the units of beam parameter produced, you need something in the range of 3 to 4 mm mrads. Today’s diodes are in the range of 20 mm mrads, so that means in reality they are about 50 to 100 times lower in brightness than what TeraDiode can do. It will probably take more than five years, in my opinion, for direct diodes to really get to the level that they could cut metal using the conventional techniques that are out there.

SFL: Is TeraDiode more of an R&D company or a manufacturer?

Huang: We started out as an R&D company in some sense, but we are now a manufacturing company under the management of our CEO Parviz Tayebati, who brings tremendous manufacturing experience. We have a very impressive production line for building these direct-diode lasers. We have produced a large number of units that have already shipped to customers.

We are actually competing against, in some sense, other laser manufacturers, but we are going to be potentially selling TeraDiode products to system integrators to incorporate into their technology. We are making the laser source that comes into a system that others integrate. So we sell to system integrators and directly to end users.

As TeraDiode continues to make inroads with its direct-diode technology with new partners like Panasonic Welding Systems, the team at Shop Floor Lasers will be sure to keep our readers in the know. Stay tuned!