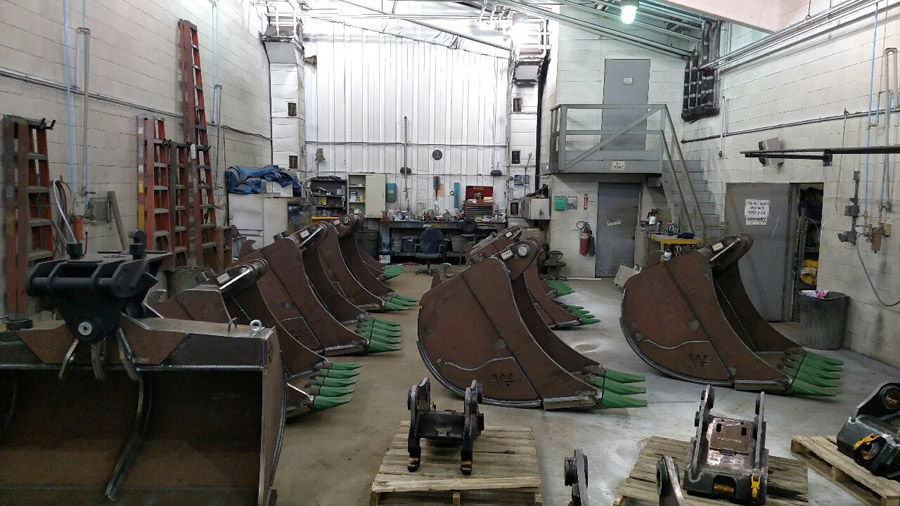 Sargent Corp. is in the business of digging deep. The company owns a fleet of equipment for moving earth and other heavy loads. Tracing its Maine beginnings back to 1926, the company today is headquartered in Stillwater, Me., and has 400 employees that work in seven states. The company boasts that its workers are led by a field management team with more than 1,000 years of combined experience.

But Sargent feels its welding and fabrication shop is its best-kept secret. For more than 40 years, the shop has performed general maintenance on Sargent’s heavy equipment, from diggers and dump trucks to screen plants to fuel and water trucks as well as the numerous attachments, including snow blades, brooms, cutters, tillers and hammers. The shop also assists outside customers, such as the University of Maine, with equipment repairs and new builds.

Sargent’s shop is also an authorized supplier for Wimmer International, filling hundreds of orders every year for excavator buckets and quick couplers. The 9,600-sq.-ft. fab shop is fully equipped including an 10ft.-by-26-ft. burn table that can cut 3-in. steel plate, a press that can bend 1.25-in. steel plate, two overhead cranes and a workforce of 13 certified welders.

The shop has one Hypertherm XPR300 plasma cutting setup on a new Koike Aronson burn table, along with an oxyfuel setup for plate from 1 1/2 in. up to 3 in. They cut a variety of shaped parts from 3 in. to 6 ft. long by 4 ft. wide and up.

“We burn a lot of Hardox 450 wear plate [trademarked brand of formable abrasion-resistant plates] and also A572 steel plate on the XPR,” says Marcel “Red” A. Rancourt, Sargent’s welding shop supervisor. “We burn from 1/8 in. all the way up to 1 1/2 in. on a regular basis. Last year, we burned about 60 tons of plate on the XPR.”

After cutting, the parts are cleaned and welded together to make the final products. Last year, Sargent produced approximately 290 parts in total in all sizes. The final products require on average between 50 and 120 hours each to fabricate.

Sargent invested in the XPR300 to help increase production for the product line, and it’s been trouble-free since the installation. The XPR300 replaced an older Thermal Dynamics Auto-Cut 200 plasma system.

“The Auto-Cut was getting older and it was getting harder to find replacement parts for the burn table,” Rancourt says. “We looked up Hypertherm and went out to Koike Aronson in Arcade, N.Y., where they demoed the XPR for us. We ended up buying the whole package, including the ProNest software. We put the system right to work and it’s been working smoothly ever since. It makes parts around two or three times faster than the old system.”

The shop also appreciates the resulting cleaner parts that require less cleanup time. When the operator removes the parts from the table, they aren’t stuck together and there is not a lot of dross on them.

The XPR300 is more user friendly, as well. “After they came out and set the whole thing up for us,” Rancourt says, “my operator caught on right way. It’s pretty easy to use, certainly a lot easier than the Auto-Cut. The operator finds he’s changing out the consumables less often, and the process of changing them out is a lot easier.”

However, the biggest benefit of the XPR300 for Sargent’s shop so far is that the plasma operator is always well ahead of the other production units.

“The operator is pumping out parts so much quicker than before that he has time to work on other projects,” Rancourt says. “We have outside customers that want parts burned because they know we have a nice table over here. We offered this service before, but the XPR has definitely increased business.”

The XPR300 also allows Sargent more time for repairs to its own equipment. “If something is broken on a piece of equipment, as long as we can draw it on AutoCAD, we can put it into the program and burn it ourselves instead of having to order parts,” Rancourt says. We make all kinds of parts for repairs with the XPR, such as parts for dozer blades and liners for dump truck floors.”

Sargent builds a lot of custom attachments for its own equipment, and the XPR300 assists with that, as well. “For a big job at the Rangeley airport, we needed a couple of sifting buckets,” Rancourt says. “We used the table for those parts and saved the company quite a bit of money. Instead of having to rent a screening plant, they were able to use buckets instead.”

So what does the XPR300 plasma cutting system, along with the more recently launched XPR170, have that allows Sargent to make all of these gains? First, it cuts fast. The XPR300 increases cutting speed, noticeably improving productivity and slashing operating costs. It also uses power more efficiently than earlier Hypertherm plasma systems.

Behind the XPR cutters is X-Definition plasma technology, which advances Hypertherm’s industry-standard HyDefinition cut quality by incorporating several completely new technologies with greatly expanded use of HyDefinition processes for next-generation cutting on mild steel as well as stainless steel and aluminum.

“With the XPR, on thicker metals, we tend to be in the ISO range 3 for much of the process life whereas for thinner materials, for much of the time, we are in range 2,” says Phil Parker, product marketing manager for Hypertherm XPR Plasma. “This means less angularity and cutting results are more consistent.”

Additionally, consumable life and cut quality over the life of the consumables increase with advances such as Cool nozzle technology. “We developed a technology of liquid cooling for the high-current (300-amp) nozzle,” Parker says. “The design enables cooling liquid to go very close to the nozzle bore. This provides consistent nozzle wear and extends its life.”

“A key enabler in the XPR itself is that we moved the valve that controls the plasma gas down into the receptacle right by the torch; it’s basically attached to the torch assembly,” Parker says. “With oxygen cutting, it’s key to have very precise control over the arc ramp-down process. Part of that is how the power ramps down and part of it is how the gas ramps down in the plasma chamber in the torch. You want to have the hafnium in the electrode to solidify before the power ramp down and the gas flow ramp down. With XPR, we have the control 3 in. from the gas flow area, which enables us to create a very rapid ramp-down process.”

Tying into the intelligence built into the XPR power supply, it can sense what is happening at the torch in terms of the arc voltage or the stability of the current.

“We can set thresholds so if the power supply senses that the arc is being stretched beyond a certain point, it automatically ramps down the arc,” Parker says.

“Because we eliminate that ramp-down error risk,” he continues, “we have much greater design freedom to create a process with optimal consumable life.”

Despite all of these advancements, the XPR300 is easy to use. The system is designed with fewer consoles and connections. For example, an EasyConnect feature allows the operator to quickly plug the torch lead into the torch connect console without the use of tools. Everything is consolidated into one connection point, where before multiple connection points and hoses were going into the console.

Another new design feature is a quick-change torch that enables the operator to rapidly change torches with just one hand. And, while still requiring a tool, the QuickLock electrode delivers quarter-turn tightening to further reduce consumable setup time.

“All the XPR consumables are bevel capable and they provide the same center point,” Parker adds. “Therefore, the torch tool center point is the same whether using 80 amps or 300 amps. This is very handy for people doing 3-D cutting or bevel cutting. That cutting can become time consuming if you have to adjust for each process.”

Overall, the arrival of X-Definition plasma technology and XPR300 and XPR170 plasma cutting systems is a huge step forward in the capabilities of plasma technology. The systems offer reduced operating costs with increased cutting speeds on thicker materials and dramatic improvement in consumable life over previous-generation systems. And, the advancements in stainless steel and aluminum plasma cutting open up a range of opportunities for companies by providing high cut quality and consistency with plasma. 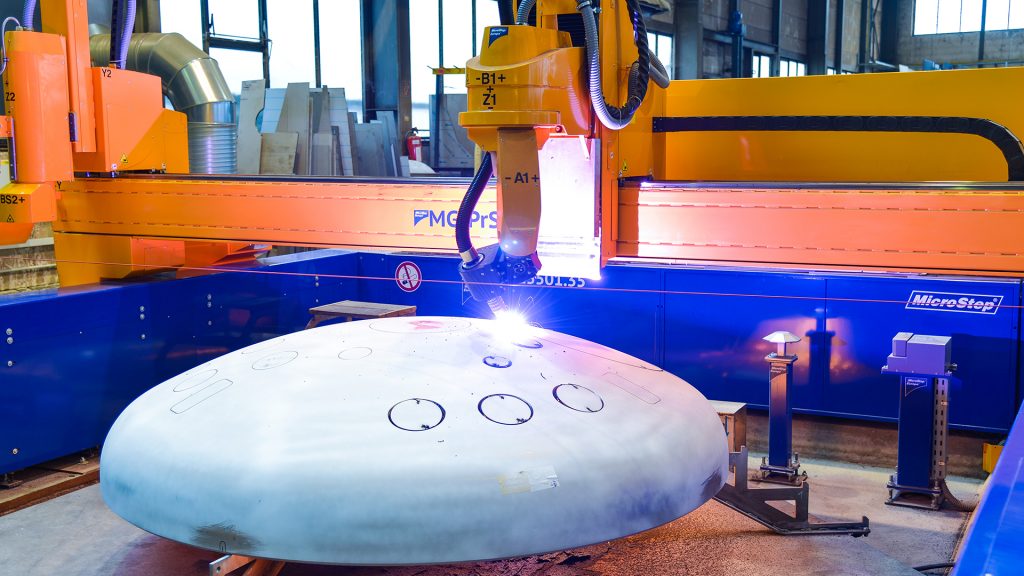 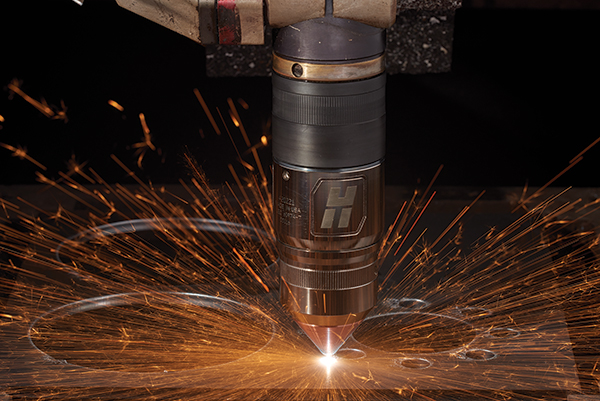