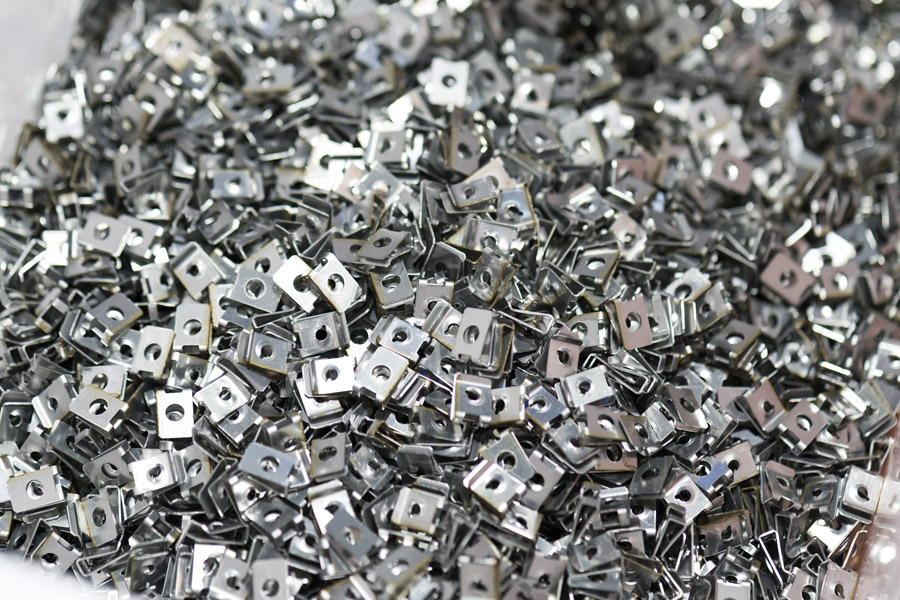 At times, it feels like technology is advancing too fast. Just as soon as you invest in the latest and greatest smartphone, commercials for the next version are showing up on every channel. But in that same breath, we would be hard pressed to return to a time when so many conveniences weren’t right at our fingertips.

What can be said of smartphones goes for fabricating equipment, as well. Smart interfaces, better connectivity and advanced technologies in general are helping fabricators become more productive and more competitive. For so many fabricators, there’s just no going back.

Conversely, stamping presses have been treated more like an old rotary phone than a new-fangled smartphone. They do the job they were intended to do and keep on chugging along despite the fact that they were purchased decades ago. Until recently, that is. Thanks to new technologies, stampers are finding solutions to long-standing problems. 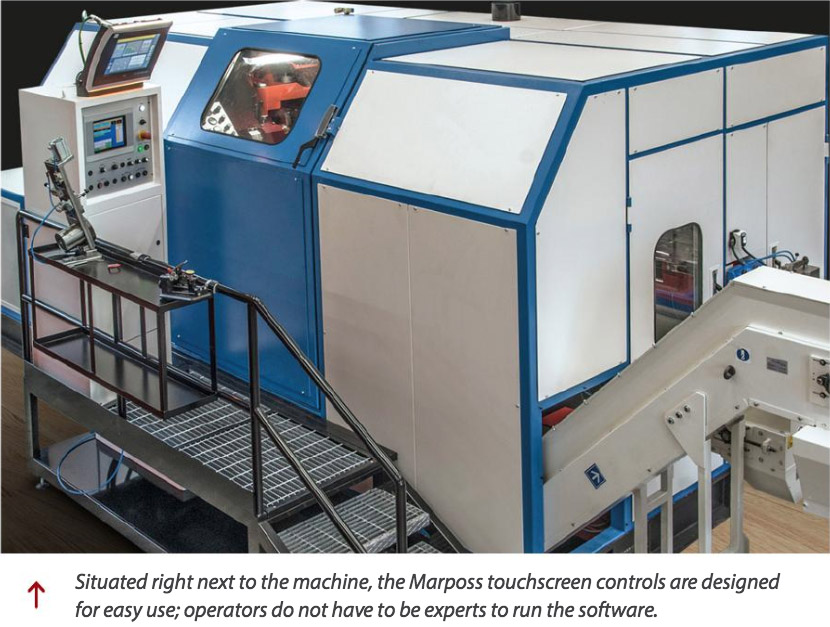 According to Philipp Janssen, product manager at Marposs Corp., a producer of precision equipment for measurement and control in production environments, just as other fabricating processes are being enhanced with technology, stamping presses can benefit from new systems, as well. Many stampers, in fact, are voicing the same challenges – challenges that can now be solved with advanced technology.

“What we realized some time ago is that stampers face huge problems with strip marks,” Janssen explains. “Speeds of the machines are going up, but the problem that every stamper knows and has is that, sometimes, when the punch goes through the material, chips of material – that should be going into the scrap bin – stay on the punch and then imprint on the material. In a lot of situations, this isn’t a good outcome. Therefore, it’s important to catch the unwanted material beforehand to avoid those strip marks.”

He continues to say that other common challenges include machine overloads that could be avoided from a monitoring system and material being stuck in the machine while feeding that could also benefit from a detection system. Fortunately, a line of systems developed by Marposs can help solve all of those issues as well as usher stampers into the age of Industry 4.0.

Marposs’ Brankamp line of in-process, real-time monitoring systems were developed for cold and hot forming, thread rolling and stamping operations and are available in four models. The X1 and X3 models were presented to the market in 2017 and work off of sensors that learn the normal limits of a process. When the process moves outside of those limits, the sensors alert the control unit, which will either sort out the formed part or stop the machine. 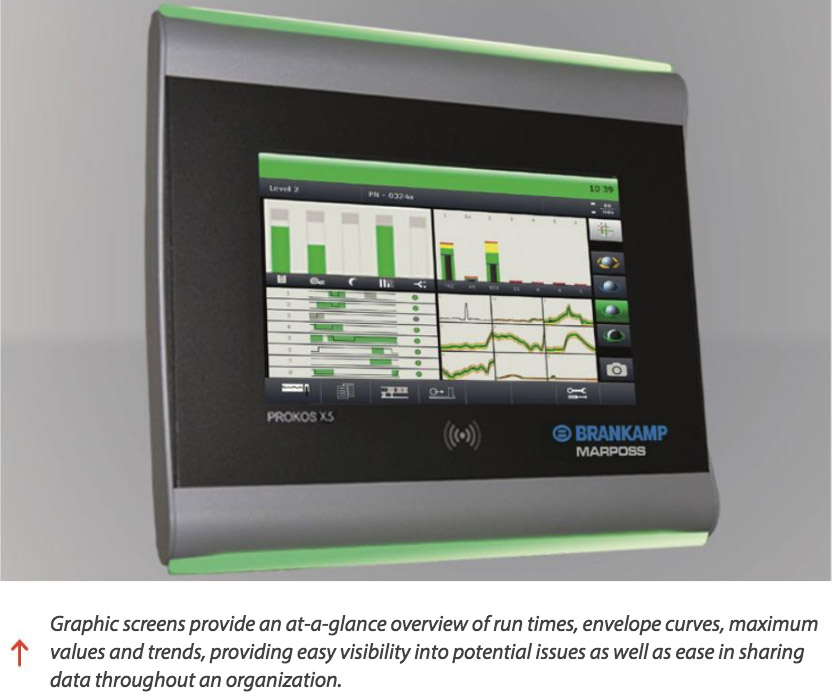 The X5 model, which launched in 2018, is based on those same capabilities, but is available with a large 12-in. touchscreen control and six zoom channels. It also features a technology called Tool Memory that stores data to achieve precise machine setup for repeated production runs. All three models are able to identify manufacturing faults, tool variations and part defects, such as cracks in components and misfed material.

Followed shortly after the X5, the X7 became available to further the technology’s capabilities. In addition to increasing the monitoring channels to 30, the touchscreen on the X7 was also enlarged to 15 in.

“A lot of stampers don’t have the latest machine models,” Janssen says. “They have older machines that don’t have an HMI, so we were charged with the challenge to extract operating information out of a press that doesn’t have a computer inside of it. And we prevailed. So now, sensors placed either on the machine, in the tooling or in the dies can connect a press to the Brankamp unit that can be connected to the software so that our customers can see at a glance if their machines are running, if their OEE is where it needs to be and what, exactly, is happening at the machine. And it all ties into the idea of Industry 4.0.”

Another common bond with many stampers is the challenge of seemingly running at capacity when orders continue to flow in. With the Brankamp solution, stampers can achieve faster setups, less rework and, therefore, increased capacity to better facilitate new orders – all without having to invest in additional presses. 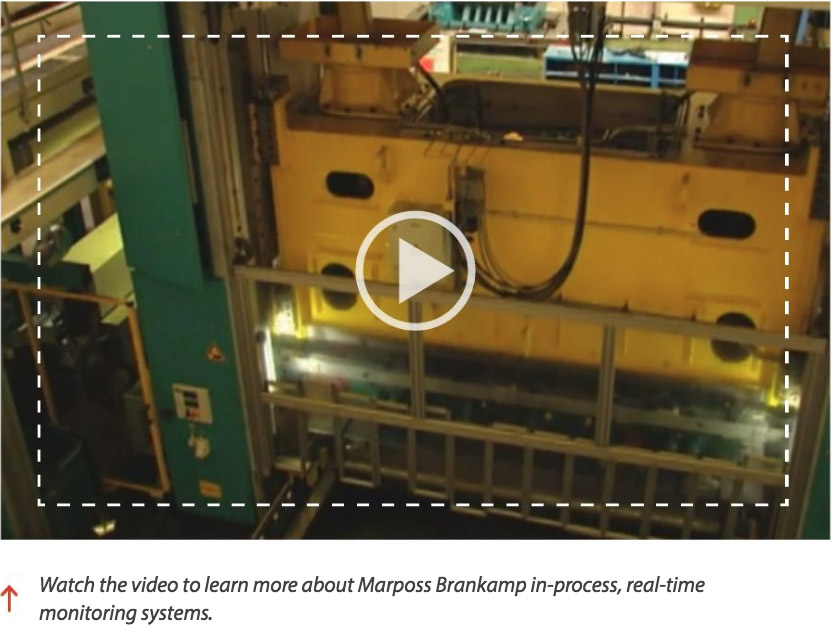 As Janssen relayed, stampers are seeking out tools like the Brankamp system to address similar situations. Anecdotally, he says one thing he hears a lot about is the issue with strip marks that can show up on a part due to even the smallest chip of metal getting trapped inside of a machine.

“The biggest problem our larger customers have – who are often automotive parts manufacturers – is strip marks,” Janssen reiterates. “If they don’t catch it, they’ll accidentally deliver those faulty parts to the customer. In fact, I just heard about an automotive manufacturer that had a batch of parts returned that cost him more than $1 million. Even if only five or six parts are bad, some customers may have to reject the entire lot.”

Obviously, the costs involved can be huge, but the time lost from not being able to monitor a press can also be significant. If a broken punch can be detected, the machine can be stopped right away instead of going through an entire part run and only later discovering the issue. On top of the time and cost involved with re-running a part, broken tooling can affect other parts of the machine if it isn’t caught in time.

“If the punch is hardened and that very hard broken part is transported through following stations, the situation just got infinitely worse,” Janssen says. “At that point, all of the stations are impacted, and your machine is going to be down for much longer because now you have to replace everything.”

Adding insult to injury is a situation where a stamper doesn’t have spare tooling. If an issue arises with the tooling and there isn’t a replacement, downtime can be incredibly damaging – not only in terms of time and cost, but reputation, too. 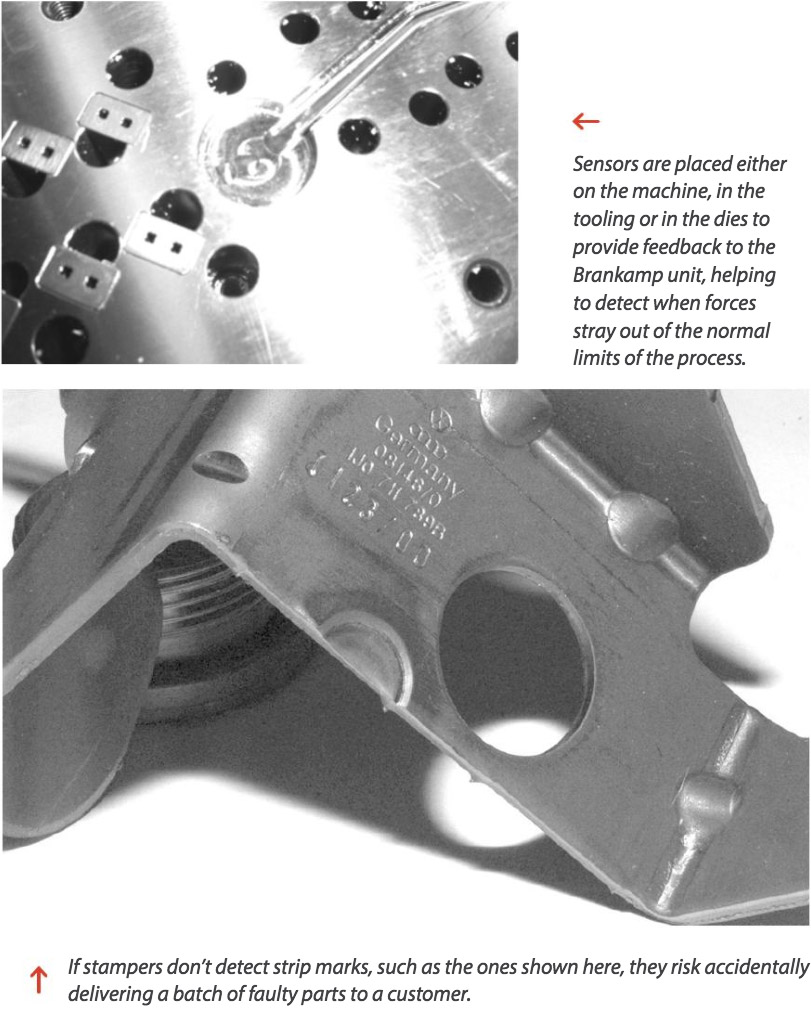 To implement the system, all a stamper needs to do is choose which system model best fits their needs – the X1, X3, X5 or X7 – and then work with Marposs to acquire the various sensors that are required. Depending on a stamper’s goals, every single die can be equipped with a sensor, which travels with the dies on and off the press. For new product runs, setup of a new sensor can be as quick as 5 min.

“If you have a new die that’s never run on a machine, you have to set it up, but that’s a quick, one-time process,” Janssen says. “Because the sensors will stay on each die, the next time it’s needed, you just pull up the recipe that you used before. The system can store thousands of recipes.”

For a first-time customer, Marposs will come in and demonstrate the installation of a sensor. From there, stampers can be confident to place sensors on their tooling without assistance. If necessary, Marposs can also support a stamper installing a new sensor over the phone.

Once the sensors have been installed and connected to the Morposs system, stampers will find a wealth of operating data at their fingertips. Sensor signals are displayed as maximum forces, envelope curves and trend progressions, and detailed monitoring is also possible, including run times, setup times and downtime as well as sensitive process areas, such as distorted parts or a missed feed. 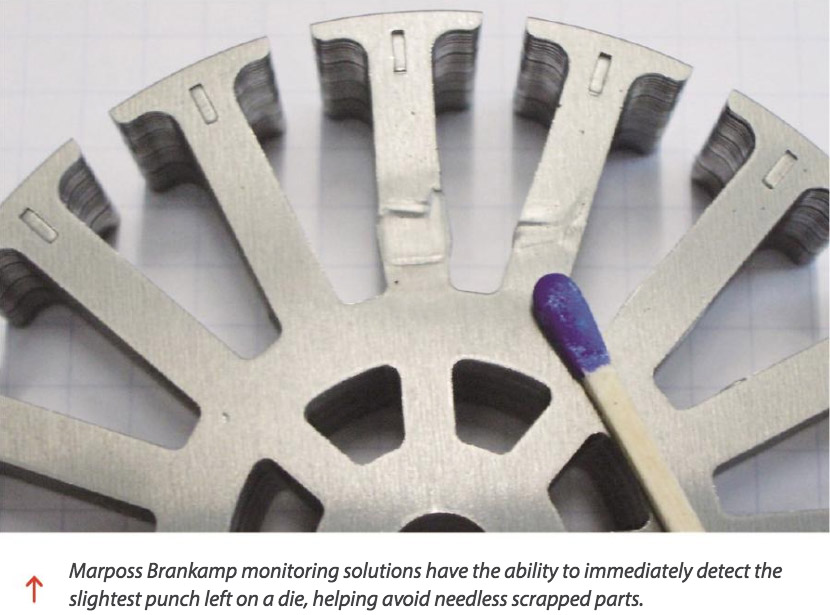 “These days, we all know about the skills gap and how hard it is to find skilled operators,” Janssen says. “For so long, companies have relied on operators that have been in front of a stamping press for their entire career – operators that can hear whether the machine is running properly, how it’s reacting to the material and if something is wrong. But those are baby boomers that have already retired or are ready to retire. They haven’t always been able to hand the baton off to the next generation, so this is a great solution to combat that ongoing issue.”

Truly, the touchscreen controls serve as a tool that the younger generation can feel comfortable using. Anyone that grew up using a smartphone will be able to use the system. Its controls are also straightforward enough for older generations to easily transition to.

The Marposs Brankamp systems are new to the U.S. market, but with 40 years of experience in the stamping market, they are widely used in Europe with more than 900 customers taking advantage of the technology. Gone are the days where stamping operations are considered behind the technology times.