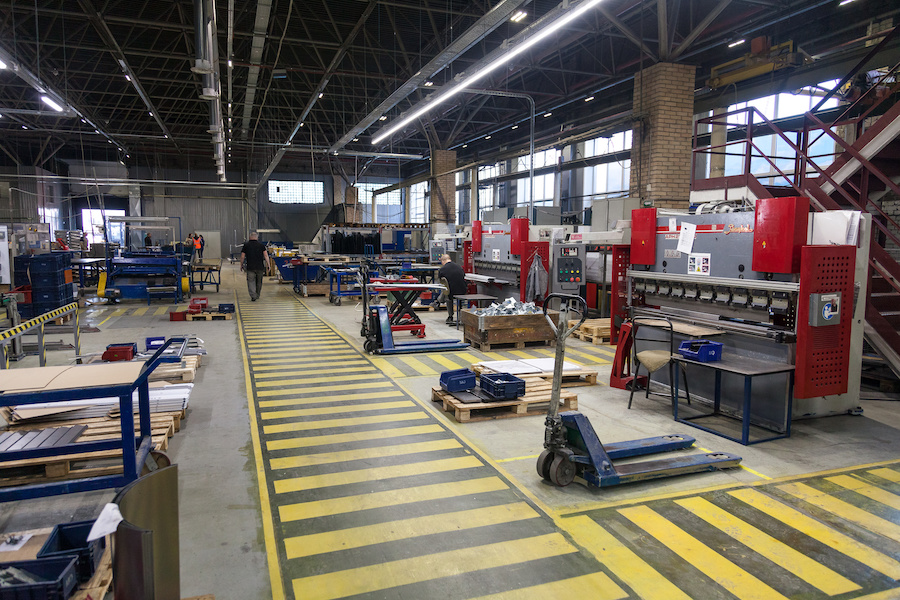 “The little things happen way more often than the big catastrophic things,” says Jim Finnerty, product manager, Wintriss Controls Group LLC. But, more often than not, when Finnerty asks a business owner or a shop manager about the biggest reasons for downtime, their response usually involves a story about “that one time that everything went haywire.”

“Those anecdotal replies aren’t an accurate representation of actual downtime because people tend to remember the big stuff, but ignore or not recognize the little stuff that happens over and over again,” he explains. “It’s the dozens of those day-to-day inefficiencies that offer the biggest areas for improvement.”

Think of it this way: Regular, recurring downtime, like a machine operator waiting a few minutes for more material, adds up fast. It’s the little things that don’t always get the attention they deserve, but can have a big impact on production efficiency.

Identifying the “little things” isn’t as easy as it might sound, though. It requires machine monitoring, data analysis and, perhaps most importantly, full transparency with machine operators to gain their participation and acceptance.

ShopFloorConnect works by installing a small machine interface box onto any fabrication machinery, which automatically collects operating data by connecting to common electrical signals emitted by the fabricating equipment. As an example, when connected to a 2-D laser, the system collects the signal from the light within the laser’s control console that turns on when the machine is operating. This signal, therefore, represents the machine’s uptime and downtime.

The thought of having this type of monitoring process might be worrisome to machine operators who, at first, feel they are being “watched.” However, in most cases, bottlenecks are found in the equipment and processes and are not found to be the fault of the machine operator. It is for this reason that when ShopFloorConnect objectively gathers data, management gains a much keener and accurate understanding of their operations and employees. Communicating that reality to employees – long before installing a system – is key to success.

What follows are some examples where ShopFloorConnect made a critical impact to increase productivity and improve profitability and how machine operators played a key role in those efforts.

Quickly after employees get to know ShopFloorConnect, their concern turns to relief. As time passes, many bottlenecks are discovered to be machine or process issues as opposed to the fault of individual operators. One of particular interest was found in a fabricator’s welding department on the company’s robotic welding turntable.

For the longest time, the turntable functioned with the robot welding an assembly on one side while an operator was fixturing the next assembly to weld on the other side. The problem was that the fixturing took twice as long as the welding, meaning the robot often sat idle waiting for the operator to finish.

“Because it took the robot 3 min. to weld the part, but 6 min. for the operator to load up a fixture, there was a lot of downtime,” Finnerty says. “The ideal way to handle the turntable was to ensure a balanced workload.”

So, instead of welding and fixturing the same part on both halves of the turntable, the fabricator turned to ShopFloorConnect to measure the cycle times of all of the parts running through the shop. Quickly, the company was able to identify two scheduled jobs where welding and loading the fixture were similarly timed. In the end, something as simple as shuffling parts delivered significant increases in the overall throughput of the turntable.

Across manufacturing, small inefficiencies are constantly keeping businesses from their full profitability potential. Take the example of an automotive parts manufacturer with downtime reports that indicated its coil-fed stamping presses were experiencing a combined average of 60 hours per week of downtime for raw material replenishment.

Until ShopFloorConnect was installed, this downtime went largely unnoticed. After installation, however, the downtime was revealed to be three times greater than what the manufacturer expected based on previous time studies that did not take into account the time the operator had to spend locating material and operating a crane to position the coil for installation.

Based on this information, the manufacturer was able to justify hiring a junior setup person to monitor the area (using ShopFloorConnect’s Factory Viewer) and identify the machines that were due for a coil change, then locate the material and stage it so that the operator could quickly replenish the machine when the old coil ran out. The end result was a downtime reduction of 66 percent. The manufacturer traded 40 hours of labor at $25 per hour for 40 hours of uptime worth $200 per hour.

For fabricators relying on ShopFloorConnect, stories like this are common. Whether it’s identifying lags in material changeovers or recognizing the time involved with doing a simple quality check, every business owner has many opportunities for optimizing operations in his shop. Many of the biggest gains are found at the operator level.

“Incentivizing operators to get on board with ShopFloorConnect really pays off,” Finnerty explains. “We have a customer that hands out $100 gift cards every month for the press brake operator that has the longest streak of uptime. Informally, the incentive inspired the operators to think deeper about their workflow. Soon thereafter, the operators started copying one another when faster and more efficient processes were identified. This resulted in the company formally adopting a best-practice approach for running the press brake area.

“After instituting the gift card incentive, productivity increased and the company started seeing monthly savings around $15,000,” he says. “It was a simple thing to do, an easy thing to track, and benefitted both the operator and the company.” 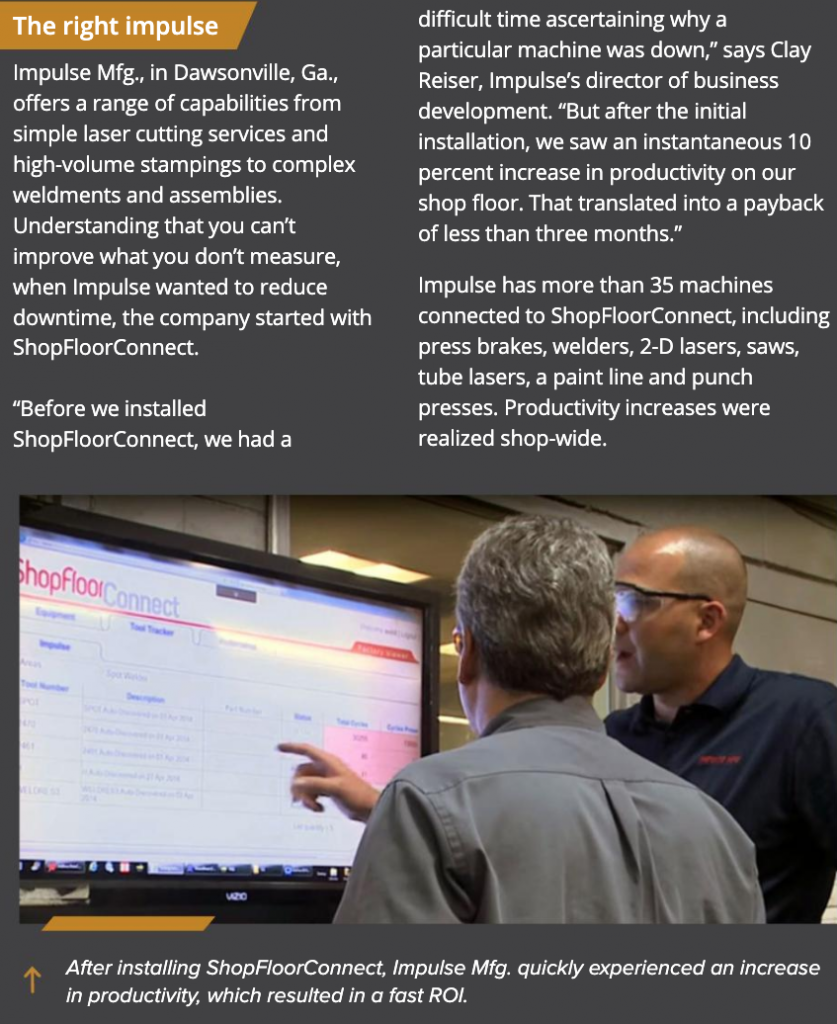 In terms of downtime reduction efforts, Finnerty recommends an incremental approach: starting minimal but gravitating to moderate, focused and aggressive levels as the familiarity with the system grows.

“Everybody would love to take an aggressive approach and immediately start minting money,” he says. “Sometimes that can happen, but users have to understand that it takes some internal resources – and a lot of commitment – to pull that off right out of the gate. Usually, we recommend that users try not to bite off too much and sort of ease into it.”

A minimal downtime reduction effort does not involve any direct machine downtime tracking. Instead, it typically consists of nothing more than notifying machine operators that ShopFloorConnect has been implemented and deploying one or two large-format displays to show the uptime status of machines in real time for everyone to see. Historically, even the minimal level of effort results in a 5 percent reduction in machine downtime.

When a moderate approach is employed, 10 percent reductions in downtime can be expected. Such increases are easily realized when operators use ShopFloorConnect’s downtime tracking menu to identify the real reasons for downtime. In addition, real-time displays, such as ShopFloorConnect’s performance summary, allow management to quickly spot underperforming machines, enabling more timely corrective action.

As businesses move to the “focused” level, they can expect an approximately 15 percent reduction of the current downtime, which typically works on the same principles described under the “moderate” program, but with more stringent and widespread application throughout a factory. Once a shop is ready for an aggressive approach, they can take advantage of the full application of ShopFloorConnect’s downtime tracking and reporting functions, real-time displays and an alert feature to immediately notify personnel each time a machine stops for a prolonged period of time. Downtime reductions of 20 percent and higher are realistic expectations.

After a company uses ShopFloorConnect to identify its biggest bottlenecks, there are significant benefits to continue to monitor for downtime reasons. For example, the ability to automatically generate conditional alerts from any machine is one benefit.

These alerts can be custom texts or email messages that are sent to selected recipients whenever preset conditions are met at a machine. The alerts can be used to notify an operator when an unattended machine has stopped running, alert management when a critical customer job goes down or summon resources when specific conditions exist at a machine – such as notifying a forklift driver when a scrap bin needs to be replaced.

Because they can respond more quickly to each event, manufacturers using ShopFloorConnect are significantly reducing downtime. Initially, larger reasons for downtime are likely to be the first issues identified. Then, after more time goes on, after making the “big” changes to boost uptime, it may be surprising to discover that all the little things that may at first have seemed too trivial to address really do add up.