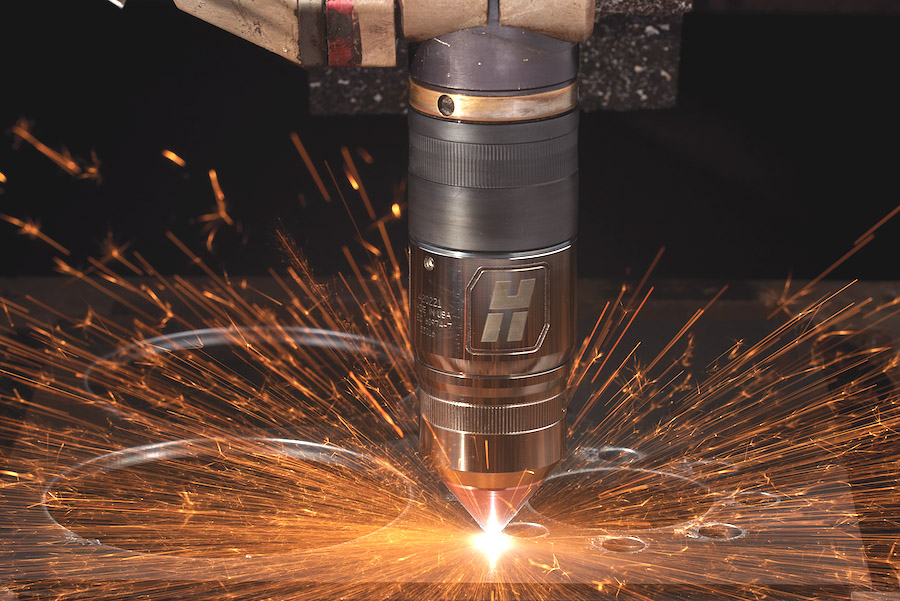 Matt Tucker’s Florida-based shop, Tucker’s Machine & Steel Service Inc., has deep roots in adopting the latest in technology, dating back to his grandfather and great uncles, who were among the first shop owners in the state to embrace MIG welding. Tucker has continued the legacy of latching on to high-tech production methods, including adopting a plasma cutting solution that matches his penchant for high-quality edge finishes. 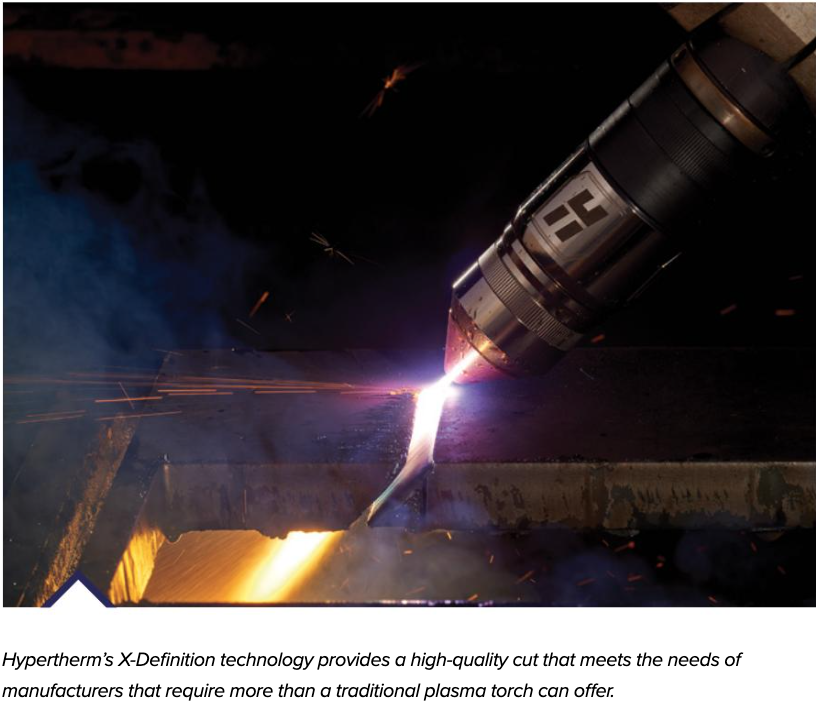 Tucker’s family were mechanics by trade, but branched out into welding and machining when they established their service and repair company in Leesburg, Fla. In the early days, they manufactured agriculture equipment, but a lot has changed since then.

Tucker’s products, which carry the trademark “Tuckerbilt,” represent quality, dependability and customer service. And while the company can handle a variety of applications, it specializes in producing equipment for working with concrete used in construction. The custom equipment is built for pouring concrete, picking up concrete, hauling concrete on trailers and building concrete molds, such a stair forms. If concrete is involved, Tucker’s company has a solution for it.

“We’ve morphed into a different type of company from the one my grandfather founded,” Tucker says, “but we’re always trying to stay current on the latest technology.”

Tucker, who has worked in the shop for 35 years (with the early years consisting of afterschool and weekend hours), says his family were early CNC adopters, buying an Airco cutter with six torches. This acquisition prompted other manufacturers in the area to come to Tucker’s for their cutting needs. And while steel service centers are better equipped to do that kind of work these days, Tucker has continued to pursue technology that keeps his company on the cutting edge.

There is always a choice of machine and method when it comes to cutting, as Tucker well knows. Given that some of the products the company makes utilize thick mild steel for holding tons of concrete, laser cutting technology is just “too costly and too slow.” And while the “bread and butter” materials are in the 3/8-in. to 1/4-in. range, Tucker also needs the flexibility to scale down and cut 14-gauge steel for the off-highway vehicle cabs the company manufactures. 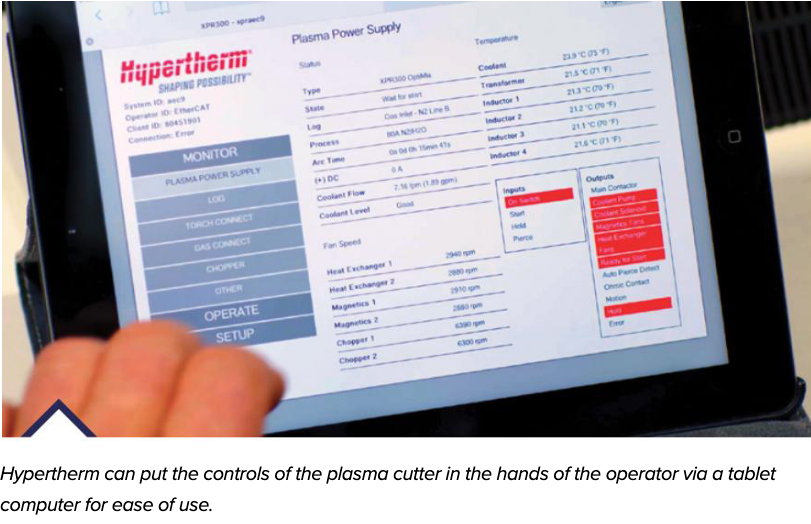 Plasma can cover all those bases. Truth be told, Tucker is interested more in flexibility and quality than speed, but he’s getting all three with a Hypertherm XPR300, a plasma cutting solution he acquired around two years ago.

When plasma cutting technology was fresh on the market, Tucker says manufacturers could purchase a cutting machine, but they had to buy the cutting table and material handling components from disparate companies and “hope to hell it all worked together.” He found a Japanese-made brand that offered a unitized machine, meaning everything was included, but ultimately, the experience, which required an inordinate amount of maintenance on his part, was “very disappointing.”

In 1982, the company bought its first Hypertherm machine and there were no disappointments that time thanks to the quality of that early machine. Since then, the company has been upgrading its operations by adding a variety of Hypertherm models throughout the shop, including the XPR300. Two years later, Tucker still hasn’t had to do any maintenance on it. That’s definitely a perk, but the quality cuts are where Hypertherm truly has earned his loyalty.

“Before acquiring the XPR300, I learned quickly not to expect a high level of quality when I had to farm out a cutting job,” Tucker says. “I’m pretty picky when it comes to tolerances, edge quality and the actual part size.” 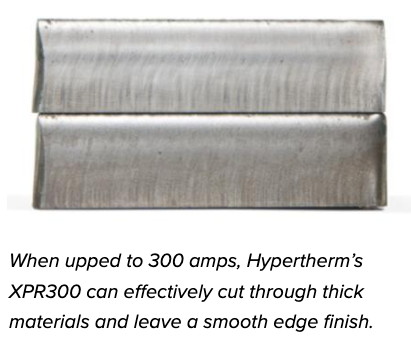 Speaking of quality, Hypertherm looks to the ISO 9001 standard that specifies requirements for a quality management system as a measure of how X-Definition technology can perform. ISO 9001 stipulates that cut quality, which is a measurement of a cut edge’s deviation from perpendicular, ranges from a rating of 1, which is the least amount of deviation (preferred), to a rating of 5, which represents a higher amount of deviation from perpendicular (lesser quality).

For Tucker’s “bread and butter” materials, he’s able to stay in the ISO range 2 cut quality at lower current processes (30 amp or 80 amp) with the XPR300. When he needs to ramp up to the full 300-amp output for thicker materials, the XPR300 can maintain a consistent ISO range 3 cut quality throughout almost the entire life of a set of consumables.

Manufacturers working with metals, as well as non-metallic materials, might be inclined toward using laser cutters (or even waterjets in some situations), as lasers can be used to cut a variety of materials. But that option generally comes at a higher cost than a plasma machine. In fact, many aspects of the technologies have to be weighed to come to a conclusion on which one to choose, including value, cost, consumables, uptime, cut quality and speed. 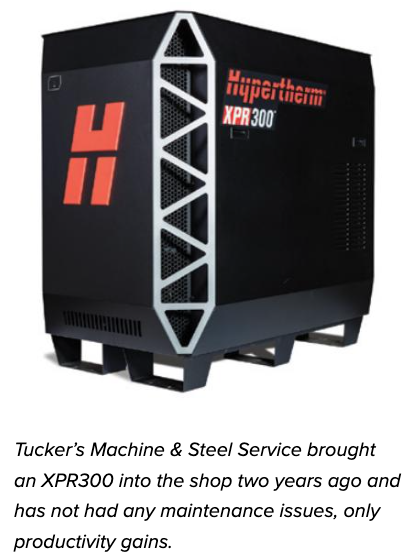 Hypertherm tested its X-Definition process against fiber laser technology on 6-mm and 12-mm sheet metal, and in this test, the X-Definition process was set for optimizing speed and quality. In both situations, the XPR plasma delivered ISO range 2 and 3 acceptable results.  Plasma cutting in general can also produce higher surface finish quality (smoothness).

For Tucker, there is also the size limitation. For example, his shop has a 10-ft.-by-25-ft.  and an 8-ft.-by-24-ft. cutting table, and “that doesn’t fit on the laser side very well,” he says. “When you cut something that big, you really limit yourself on lasers. It’s very costly when you get into that format.”

There’s also the dreaded secondary work that comes with poor cut quality, which takes time and money. That’s something Tucker says the company was able to significantly reduce.

“I haven’t eliminated all secondary work, but there certainly is very little of it,” he says. “Compared to previous machines, there is a lot less dross on the parts. On other plasma burners, you have to grind the part or chip off the dross. We don’t have to do that a whole lot with the XPR300.”