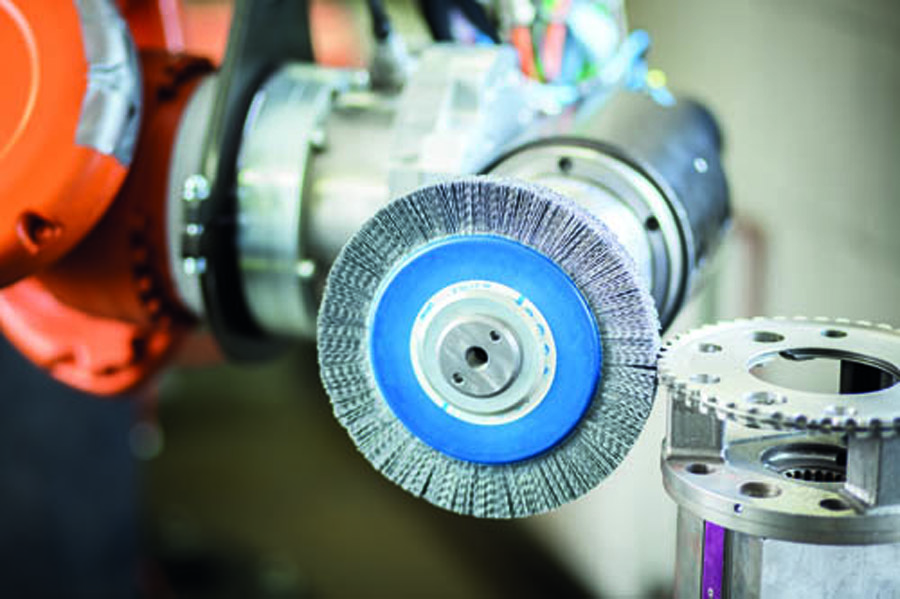 Every time a cutting or grinding wheel touches a piece of metal, the inherent byproduct is a burr that must be removed. Considering the amount of metal fabricating performed in the automotive world, it’s not surprising to learn that deburring operations run the gamut.

Deburring operations are performed on almost every metal component found on a vehicle and range from wide-scale production facilities all the way down to small mom-and-pop body shops. In each setting, the process in which that deburring operation is carried out can be quite different.

For vehicle repair and restoration applications, such as body work and aesthetics, the abrasives work is typically done manually whereas in mass production settings, it must be automated considering the amount of cars coming off the line on a daily basis. 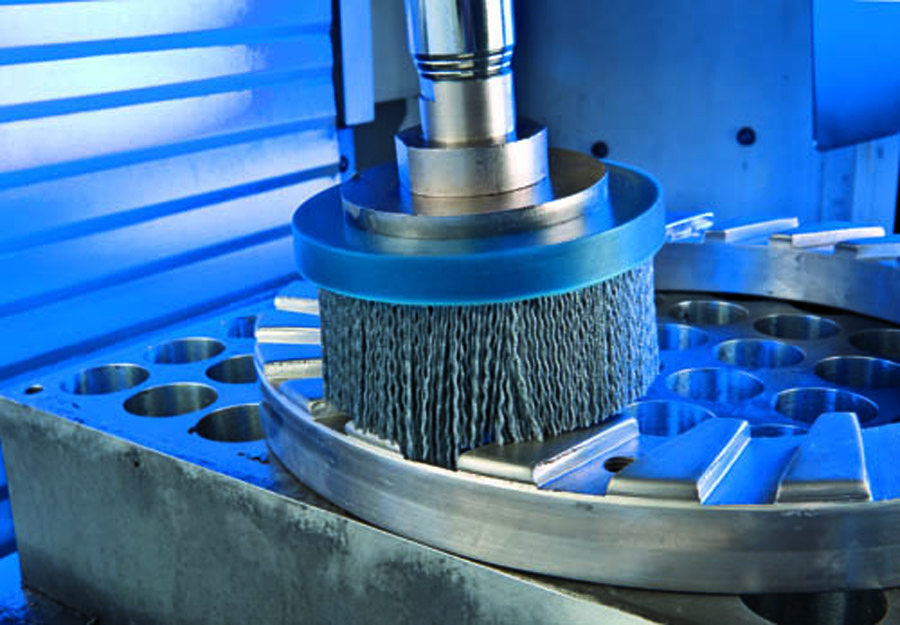 Brushes serve as a flexible option due to their filaments, which can reach into the lower areas of the part as well as the high points. Pferd is able to customize brushes to meet customer needs, including the option of brushes with long trim lengths.

Automotive components, be it a gear, a bearing or a sprocket, typically require some sort of deburring operation after they’ve been machined, cut or bent. Sometimes those operations are required for aesthetic purposes, but in other instances, the presence of burrs is of major concern because they can cause safety hazards for operators handling the part. They can also cause a mechanical failure in the vehicle.

“Think about a gear in a transmission that was cut, but not deburred,” says Imre Karetka, brush product manager at Pferd Inc. “In the transmission, multiple gears mesh together, spinning at various speeds and heating up the oil flowing around the assembly. At some point, just from the metal fatigue, that burr will break off and there will be flakes of metal flowing around in the transmission.

“The burr can get in between the gear teeth, which can interfere with the alignment between the gears,” he continues. “It can get into bearings and then block the ball bearing from spinning properly. These are just some of the several catastrophic failures that a burr can cause.”

Burrs are just one aspect of deburring operations in automotive manufacturing. Surface conditioning is also a critical operation, especially on a vehicle’s camshaft where bearings called journals allow lubrication to flow onto the camshaft to enable it to rotate freely. If the surface of the journals isn’t finished properly, the lubrication won’t be able to prevent metal-against-metal wear. This could result in an increase of heat in the engine, causing it to seize up. 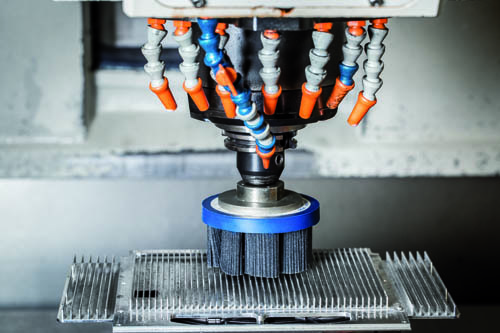 In automated operations, brushes are ideal for removing anything from rust, paint and grease to fingerprints, dust and burrs.

Due to the sheer volume of new automobiles produced, deburring and surface conditioning operations must be automated. Because of their highly adaptable nature, brushes are a good option in terms of automation. Designed as surface conditioning tools, brushes can handle anything from rust, paint, grease and fingerprints to dust and burrs.

“Brushes are often used on hand tools, such as a bench grinder, angle grinder, drill or die grinder,” Karetka says. “In addition to these various manual options, there are useful automated processes that shouldn’t be overlooked.”

For automated applications, Pferd partners with industrial CNC and robotic OEMs, such as Cleveland Deburring Machine Co., to work out the technical details for a system. Together, they work with the end user to find or design the right brush for the automation process required for that specific application.

“Abrasive brushes are incredibly flexible,” Karetka explains. “As you’re looking at a camshaft, you’ll see components such as journals and lobes that create various heights from one end to the other. A brush has the flexible filaments that can reach the lower areas of the part as well as the high points. So, we can customize a brush with a long trim length to be able to reach anything – up to an elevation change of about 2 in.”

For applications such as surface finishing a camshaft, brushes go beyond their intended purpose. By delivering a smooth surface finish on mechanical automotive components, brushes allow for a quieter, better driving experience. 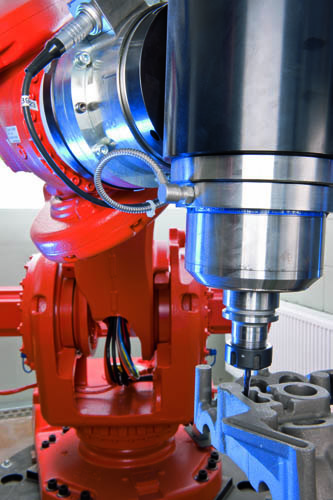 Although abrasive brushes are a great tool of choice for automation, there are other options for automotive manufacturers to consider. Cut-off wheels, grinding wheels, fiber discs, files and carbide burrs can all be automated and integrated into a robotic deburring or surface finishing system.

“Brushes are ideal when it comes to automation, but there’s a limit on how large of a burr a brush can remove in a certain amount of time,” Karetka explains. “If you don’t have the cycle time for that, then you will have to cut off those burrs. And that’s a scenario where a carbide burr can be quite helpful. Robotic arms can be set up in such a way that they’ll follow the profile of the gear tooth, and as the arms runs around the parameter of the part, the carbide burr cuts off all of the burrs.”

“The challenge to automation in the automotive industry – or any industry – is high volumes,” Karetka says.

Tool wear is a challenge that high-volume manufacturers are faced with when automating operations. As an example, when a part is cut and the cutting tool is sharp, burrs are minimal. But as that cutting tool wears, the burrs start getting larger and heavier to the point that they’re too large for a brush to remove.

Manufacturers, therefore, need to respect the relationship between the cutting operation and the automated deburring operation and remember that the degree of the burr can change over time.

“If you tell me you’re going to put a brand new cutter on every time you make a part, then I can tell you how long the brush is going to last and how many parts it can deburr,” Karetka says. “But nobody’s going to do that.”

Further challenges revolve around pre-existing plant layouts. In many cases, an automated solution needs to be designed and then integrated into an established assembly line.

“Customers come to us and say that they have 8 sec. and 25 sq. ft. for the solution,” Karetka explains. “In addition to overcoming space and time constraints, the limited space affects the size of the brush we can use. So even though the size of the brush is smaller, you have to ask it to do a lot of work.”

But Pferd has ideas for that. “You could pump up the grit size or the wire size among other solutions to do the work you need. But that just proves how paramount it is that we’re involved from the beginning of the project.”

No matter the hurdles that must be overcome, automated deburring can be flexible. While most automotive parts are steel, brushes and carbide burrs can also be used on other aspects of a vehicle, such as glass, aluminum, wood, leather and rubber components.

“As an example of the broad applications in automotive deburring, we worked with a company that needed to deburr the lever under the seat that allows it to roll back and forth,” Karetka says. “To produce just one lever, multiple components are stamped, and each one needs to be deburred. But that’s just the beginning. When you include non-metallic parts, there is a significant amount of components of the seat alone that have to be brushed.”