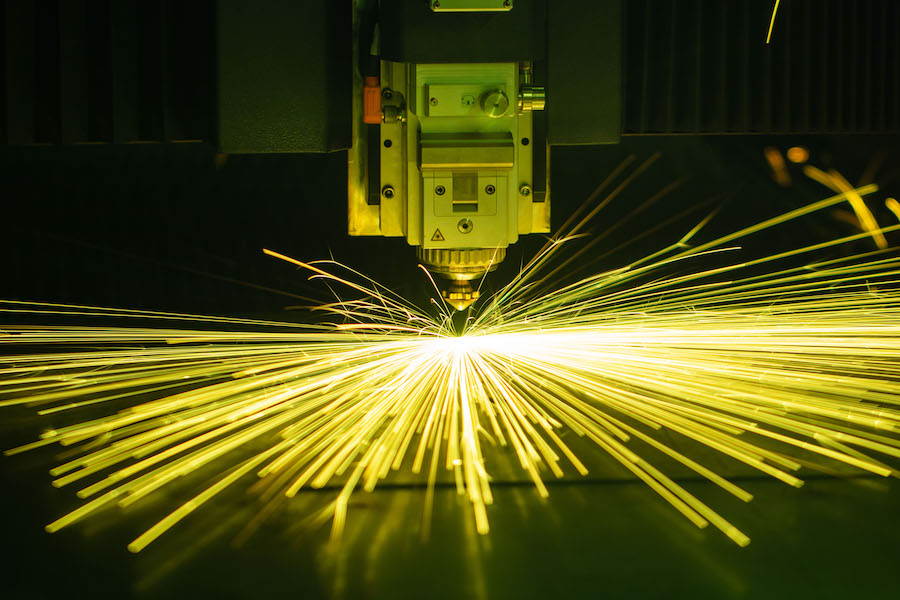 A fully automated fiber laser cutting system at J.A. Harvey (Bassingham) Ltd./Harvey Fabrication in Lincoln, United Kingdom, is allowing the family-run company to maintain a stable pricing structure and, in some cases, reduce costs for its customers while improving overall production lead times. In the current climate, this allows the company to compete for larger contracts against fierce competition.

The system features an LVD 10-kW Phoenix 4020 fiber laser integrated with twin storage towers, automated loading and unloading stations, two shuttle tables and an additional powered side table that can be moved in and out of the system for manual operation. The company also purchased LVD’s Cadman-L laser programming software and Cadman-Job workflow management software to further enhance the system.

This is the largest automation system to have been installed by LVD in the United Kingdom and the first since it acquired the Italian industrial automation specialist Compac Srl.

Harvey Fabrication was founded by the father of the current directors, Paul and Dave Harvey, in 1973 and originally focused on work for the agricultural sector. It now employs more than 50 people in a 50,000-sq.-ft. factory with facilities for laser, plasma and flame cutting as well as punching, bending, section bending, plate rolling, sawing, drilling and fabrication.

“Our core business is fabrication – supplying fully fabricated parts and assemblies on a subcontract basis,” Paul Harvey says. “We try to do as much as we can in-house to support our customer base.”

The company has a very broad spectrum of customers. It does a lot of work in the agricultural sector – supplying three of the United Kingdom’s leading crop spraying and cultivation companies – as well as making assemblies for construction equipment, architectural metalwork, and structural steelwork and fittings. It also manufactures secondary steelwork components and is CE-marked to BS EN 1090 Execution Class 4.

With that breadth of customers, it is no surprise that Harvey Fabrication also works in a range of materials and thickness – from thin sheet up to heavy plate across low-carbon and high-strength steels, aluminum and stainless steel.

The company bought its first laser, a second-hand 4.5-kW CO2 machine, in 2013. Up until then, it had used outside subcontractors, but deliveries were often late, which affected the quality of Harvey Fabrication’s customer service.

Work for the laser was quickly growing, however, and before long, it was running 120 hours a week with one operator on a permanent night shift. The company decided to invest in a new laser cutting system.

A 10-kW Phoenix 4020 fiber laser from LVD was chosen because of its cutting capacity and the quality of cut that could be achieved with nitrogen as an assist gas. The 10-kW machine is able to quickly cut through mild steel up to 1 in. thick (25 mm) and aluminum and stainless steel up to 1.25 in. thick (30 mm). Thanks to its rigid steel frame construction, deformation that is sometimes caused by high acceleration is greatly minimized, which ensures accuracy and repeatability. The machine’s cutting head is also optimized for high-quality fast cutting operations, further enhancing Harvey Fabrication’s competitive edge.

Thanks to this cutting capability, some work that was previously cut on the plasma machine and then drilled afterward is now done in a single operation on the laser. And it is done so consistently and accurately.

“On structural steel, depending on the execution class, we can now laser cut the holes,” Harvey says. “Imagine you want to put a 90-mm hole through a 25-mm plate to a 0.15-mm tolerance for a linkage pin or a bush. Plasma can only cut to a millimeter tolerance and drilling takes 10 min., but if we use the laser, it takes no time and gives the tolerance we need. It has sped up production and guarantees the accuracy we need.”

The original plan had been to just buy a laser cutting system that didn’t include the automation.

“When you are a subcontractor, you don’t give much thought to automation,” Harvey says, “but we’d been running a standalone laser for five years, so I understood the time that unloading took. So I knew it was worth looking into automating that. Then I started thinking about the possibility of automating the loading, too.”

The key issue was that any automation had to have a high degree of flexibility – running small manually loaded and unloaded batches and big fully automated runs on the same machine.

He looked at a lot of standard solutions, but nothing seemed to fit the bill – until he saw a picture of an LVD system with tower automation and realized that could be the answer the company had been looking for.

“LVD could offer a tailor-made solution to suit exactly what we needed,” he says.

The system now installed at Harvey Fabrication includes two storage towers with a total of 33 stations, each holding up to 3 tons of material. They are positioned along the factory wall with a loading station in between them. The laser has two standard shuttle tables and a direct unload station (powered table) at the side of the machine where parts can be loaded or unloaded. Overhead cross rails connect the storage towers, the shuttle tables and the unloading station.

“We effectively have three working tables,” Harvey says. “While we have two shuttle tables working in the machine, we can unload to the other one – and then we can take that table out and pick the parts off it by hand or forklift or whatever we want to do.”

This gives a high degree of flexibility for accommodating urgent and small-run jobs while allowing the efficient use of heavy remnants.

The storage capacity of the automation system gives further flexibility with a wide range of materials in store and ready for processing. This will also allow for unmanned operation overnight.

The final piece of the puzzle is the Cadman-Job production planning software. In addition to managing day-to-day relationships between an ERP system, CAM and workshop, the software can create and import work orders and generate jobs for the laser cutter.

“As well as managing the workflow to the laser, the software tells us our operating efficiency, how many cutting hours we have scheduled and how many hours we still have available,” Harvey says.

Furthermore, when users take advantage of Cadman-Job, they can better organize and schedule work, track the progress of a part or work order, receive estimates for the amount of time a job might take and also produce lists of any potential rework that is required. In addition to getting important real-time data, users can also collect data for statistical analysis to be used for comprehensive operational improvements.

“Overall, one of the biggest reasons for making this investment was the cost-effectiveness, in terms of time savings, that we get from running a fiber laser with automation,” he notes. “It means you can increase the margin on a product without increasing the cost to the customer.

“In fact, we just won the biggest aluminum job we have ever done,” he concludes. “In the time between costing the job and actually winning it, we were able to reduce the cost by 20 percent – about £23,000. The biggest factor was the time we saved on the laser cutting. We cut the whole job in 25 hours non-stop. On the old laser, it would have taken 11 times as long.”