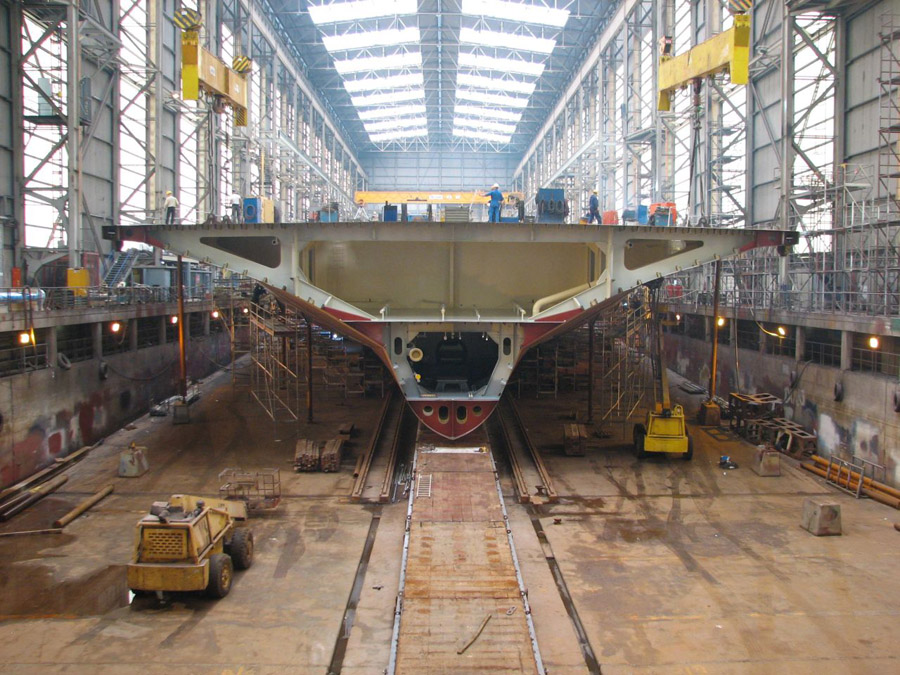 Koike, founded in Tokyo in 1918, introduced the IK-12 in Japan in 1937. The cutting and welding truck – in its sixth generation as the IK-12 Max3 – looks a bit different than it did 81 years ago, but those changes have only enhanced its performance. The truck remains an important tool in shipbuilding today. With recent upgrades, it has become a dual-purpose component for cutting and welding, saving shipbuilders time and money.

Koike machines have been used in shipbuilding since early in the company’s history. Luxury liners, barges, tugs, aircraft carriers, tankers and other large seagoing vessels have all been constructed with the company’s’ machines. Everything from hatches to drains, pipes to block parts, stiffener plates to manholes have been processed with Koike’s laser, plasma, oxyfuel and waterjet cutting machines. 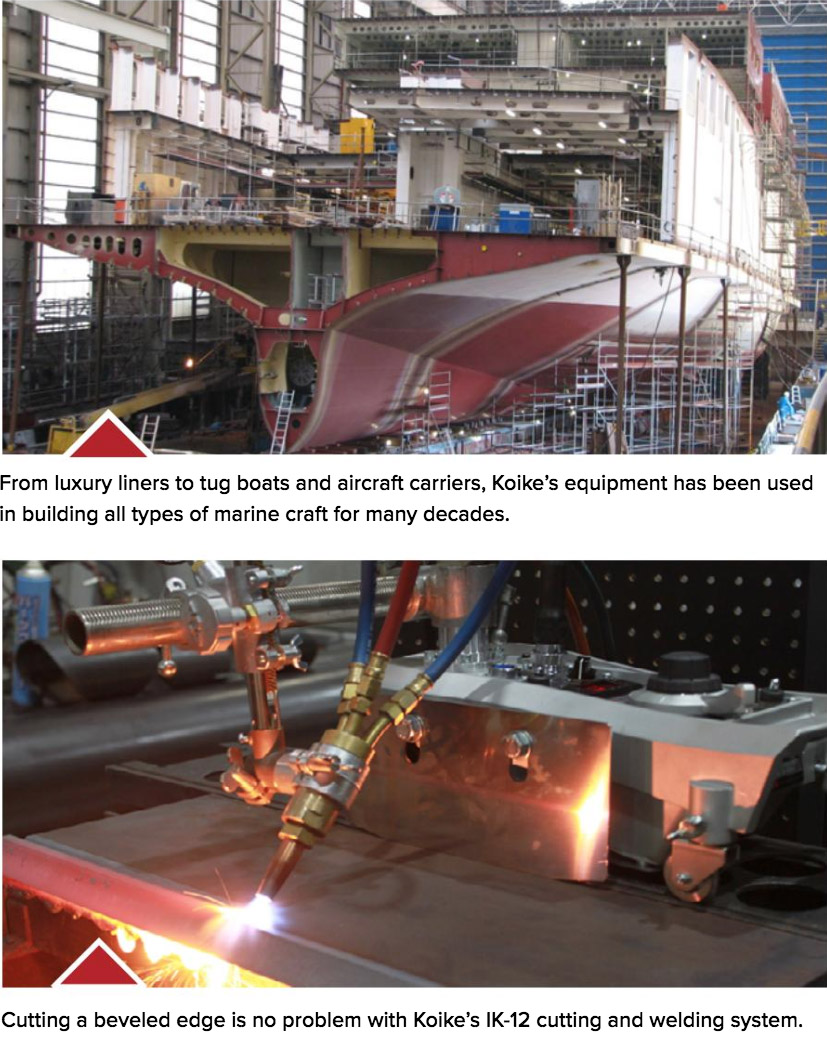 Areas that are traditionally difficult and time consuming to perform by hand have been aided by machines like the IK-12, which is semi-automated. Koike reports that productivity can be “increased by threefold” in these areas. 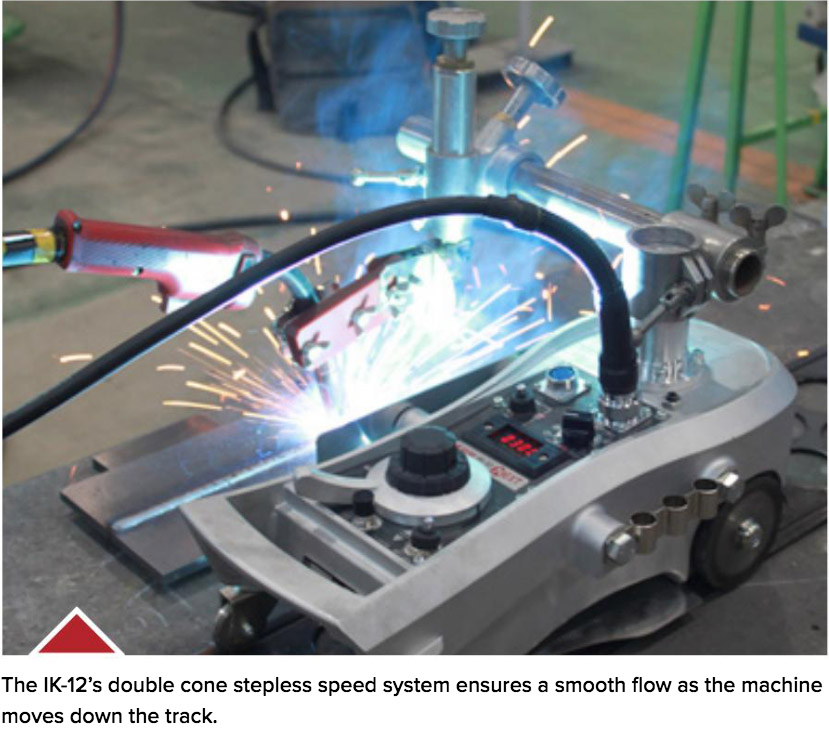 Technology was decades away from going digital in the 1930s, which meant heat generated by the welding or cutting process didn’t have much impact on the IK-12’s analog controls.

However, because digital components are much more sensitive to heat, that is one area that required some updates. Therefore, Koike developed a patent-pending design for heat deflection. It involves the actual shape of the IK-12, most notably a beveled bottom portion, and it’s this angled surface that deflects roughly 30 percent of the heat generated by the cutting torch. Extra shielding on the inside of the unit also adds protection.

“That allows the machine to be a little more bullet proof,” says Shane McMahon, product manager at Koike Aronson, the company’s U.S. manufacturing division. “It can run a little longer and run a little hotter. For welding that produces a lot of heat, like sub-arc, this model offers huge benefits.”

Aside from the heat-deflection advantages, McMahon says the design also gives the machine a more modern appearance.

The IK-12 cutting and welding system benefits from a track accessory that comes in 6-ft. lengths. A shipbuilder working on a 60-ft.-long piece that wants to make one continuous pass only requires 10 lengths of track and an extension cord long enough to power the IK-12.

One of the biggest advantages with the IK-12 is that once the cut is finished, all the operator has to do is attach the welder system to the unit and begin welding. 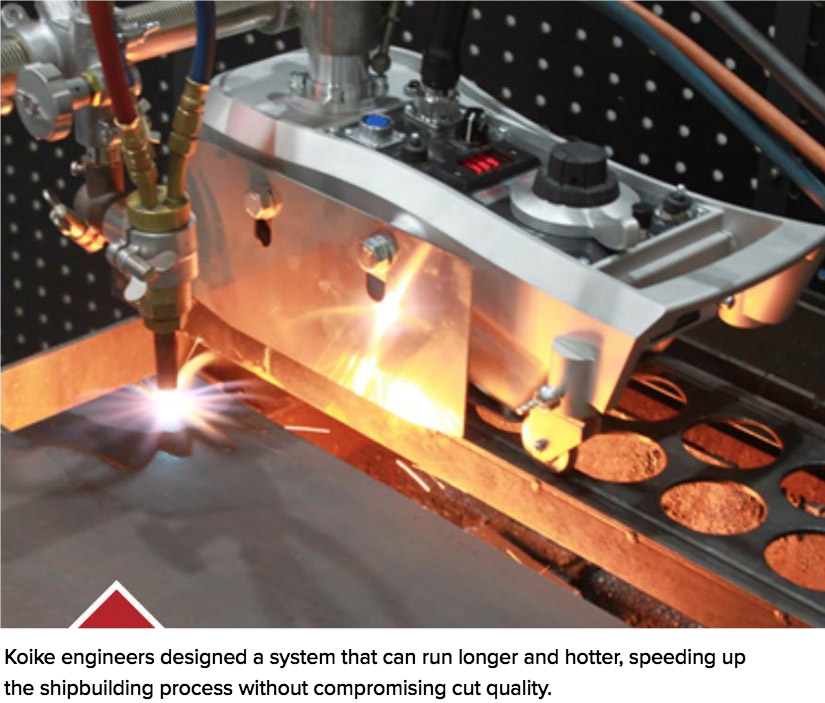 “You don’t have to reposition the track or anything,” McMahon explains. “You simply pull out your cutting torch, whether it’s a gas or plasma torch, and you put the welding gun in the same position. It’s a reduction in time, especially setup.”

The IK-12 is also engineered to hold multiple torches. For example, if an operator were working on a barge where they must weld multiple gussets, the machine features a crossbar that accepts multiple cutting torches or welders.

“So, essentially, you can do a single pass with four welders,” he says, “and that quadruples your productivity right there.”

The double cone stepless speed system that is a staple of the IK-12 welding and cutting system ensures a smooth flow as the machine moves down the track. This is an important component; because it’s a stepless system, there is no change in gears.

“Any time you switch to a higher or lower speed during operation,” McMahon says, “it’s going to leave a ding or a divot, depending on the process. If you’re welding, it’s going to leave a big puddle – a buildup of filler metals. So being that it’s a stepless drive system, it’s smooth from the slowest speed all the way to the fastest speed. It’s similar to a constant velocity transmission.”

Something that is new on the IK-12 is a constant low-speed condenser motor that works similar to a centrifugal clutch. Because it’s a mechanical actuated system, this was another area Koike was able to reduce the amount of computerized controls.

“It was designed to be high speed and low speed,” McMahon says. “So you have low speed for welding, but high speed so you can do cutting as well – all on the same carriage.”

With so many welders retiring and so few young tradesmen taking their place, finding efficiency in welding and cutting is more important than ever, which is what Koike has capitalized on with the multi-head welding and cutting approach. However, the IK-12 is extremely easy to operate.

McMahon says an 18 year old fresh out of tech school can use the machine to make the same quality of welds and cuts as a welder with decades of experience. Koike engineers are striving for consistency, as that’s what manufacturers need with a new and under-developed workforce. 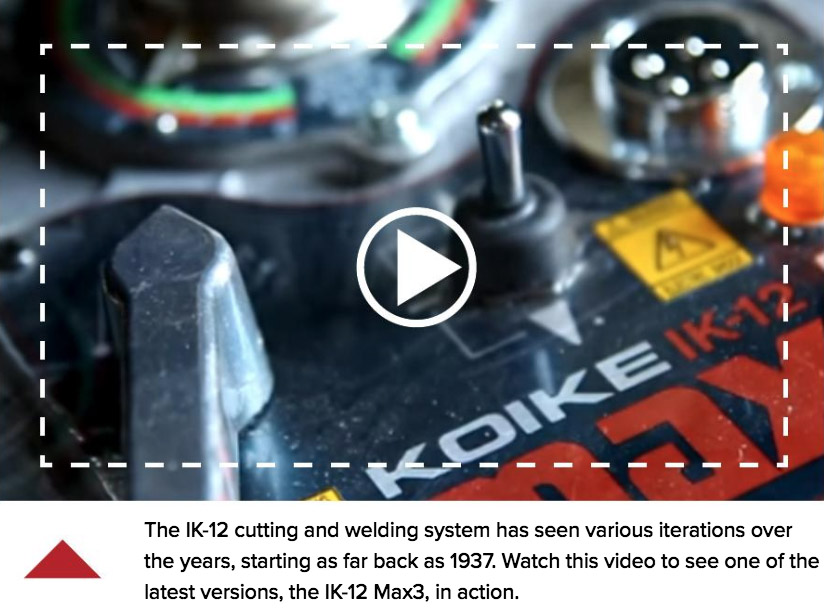 “Instead of bending over, crouching or getting into really uncomfortable positions,” McMahon says, “they can stand back from a safe distance and monitor what’s going on and see it live.”

To help with training, Koike also has cutting parameters laid out, so their tip chart shows the operator the type of tip they should be using, the height of it and the speed at which the tractor should be moving – all based on the type of material and its size.

“Our tip chart provides basically every parameter needed to make a consistent perfect cut or weld,” he says.

Numerous accessories are available for the IK-12, including a variety of torches. Shipbuilders, McMahon says, will be most interested in the S-100 and SP-100 torches, which are for square or “V” bevel cuts. The SP-100, in particular, is equipped with a plate rider with “floating function to maintain distance between the tip and workpiece.”

“The IK-12 is basically a do-all carriage,” McMahon concludes. “Its true function is to be a welding track burner, so it can run a straight line track pretty much as far as you want. But the thing with this one is we offered more flexibility in the tractor. There aren’t a whole lot of companies out there that can weld and cut with the same machine. Just having the welding option on here basically doubles your capacity. Essentially, you can build this machine to suit your needs.”