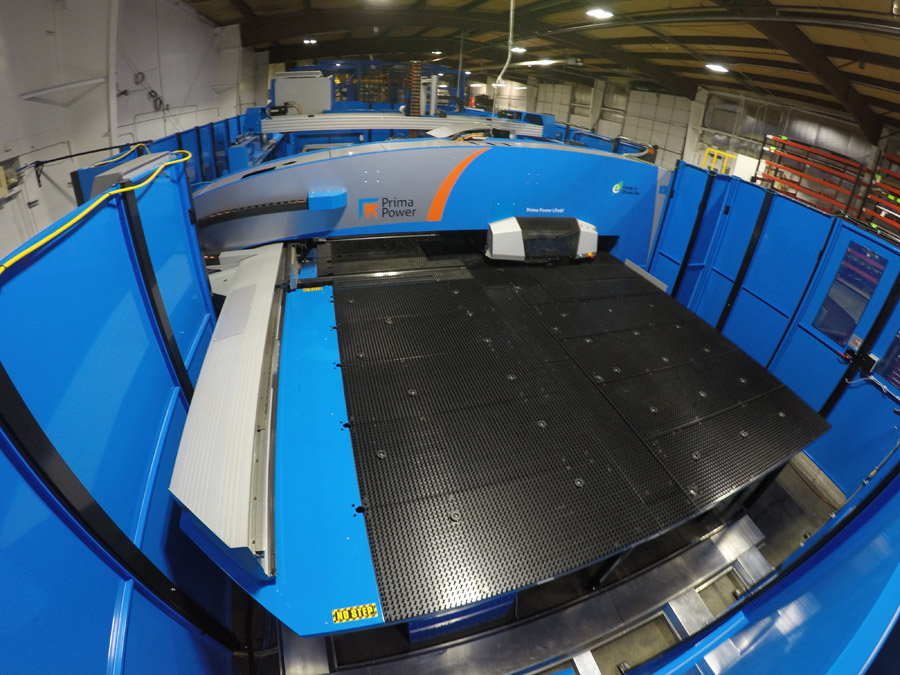 Dan Aronson, president of P&A Metal Fab Inc., is no stranger to cool machinery. A pair of million-dollar tube lasers, robotic welding cells, automated press brakes and bending systems are just a few of the high-tech pieces of metalworking equipment that have helped make his Clackamas, Ore., job shop successful. But the company’s latest purchase has Aronson brimming with enthusiasm.

“We’ve had lasers since the late 1980s, but our newest is a $2.2 million system with an automatic parts separator, dual-tower stacker with 19 cassettes, load/unload robot – everything is top of the line,” he says. “When we bought it, there was only one other such system in the entire country. It’s pretty cool.”

Aronson is talking about the Prima Power LPe6f four-in-one 4-kW laser/punch system. It’s not only the company’s first fiber laser, it’s also the first one with integrated parts sorting and material handling, a feature that Aronson says will save the company several thousand hours of tedious manual work annually.

“I used to have two guys working all day de-tabbing and sorting parts,” he says. “Now we spend a couple hours each morning moving the previous night’s production to secondary operations, and my people can work the rest of the day on better things.”

P&A Metal Fab has been in business since 1978. Its founder Phil Aronson retired in 1991 and sold the company to Japanese industrial firm Kyoshin Giken Co. Ltd. His son Dan, a longtime P&A employee, continued to work there, and in 2007 he partnered with another member of the senior management team to buy the company back. Since then, they have continued to grow P&A, investing in equipment and people and consolidating relationships with customers.

In early 2016, Aronson recognized the need for additional capacity. Like most everyone else in the fabrication industry, he’d heard plenty about the advantages of fiber lasers and knew it would be the right technology for the large amounts of thin-gauge steel and nonferrous metal P&A cuts each day. Also, the existing laser/punch system was 15 years old and beginning to show its age. It was time for a technology upgrade. 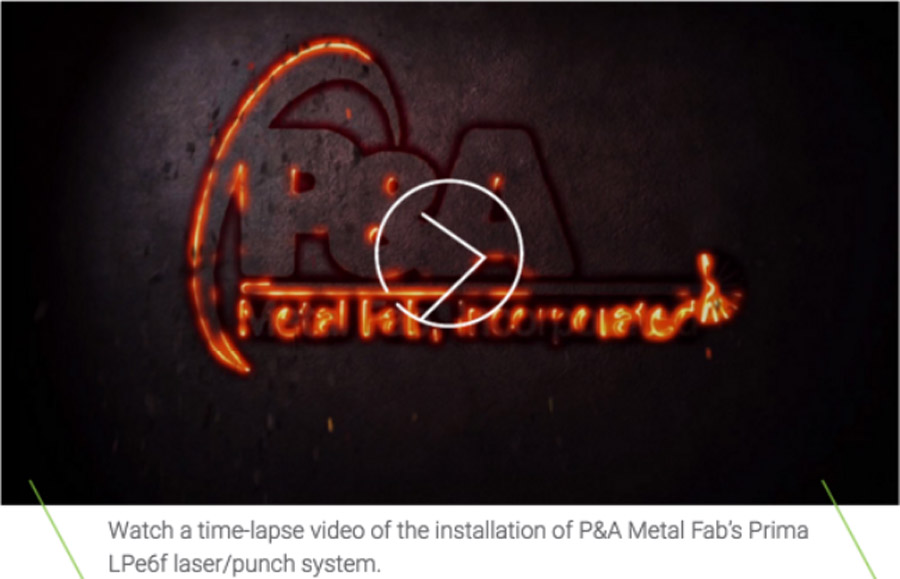 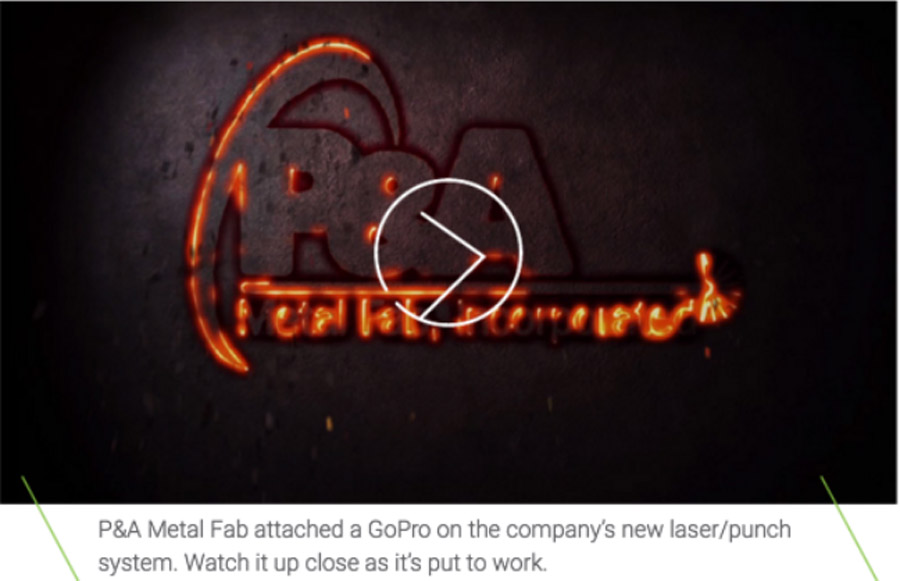 “I formed a team of four people: myself, my VP of manufacturing, our fabrication laser supervisor and the lead operator,” Aronson says. “We sat down and looked at our needs. Our old laser/punch cell has a loading tower, so for the past 15 years we’ve been used to turning the thing on at night and going home. The challenge was that each morning we’d come in to a stack of cut sheets and spend the entire day removing parts from the skeletons and brushing off oxide scale from the CO2 laser. So not only did we want to simplify our parts handling, but because fiber cuts with nitrogen instead of oxygen, we knew edge quality would be better, as well. That was our starting point.”

The team took careful stock of its options, analyzing the newer offerings of P&A’s legacy equipment provider as well as competitive brands. Along the way, they met Kyle Plass, regional sales manager at Prima Power North America’s Arlington Heights, Ill., location. He was with Aronson throughout the sales and implementation process and has since become a trusted advisor.

“Kyle told me I really needed to look at what Prima was offering,” Aronson says. “And the more I looked, the more I was impressed by the technology. In the end, it was the level of automation that cemented the decision. That and the fact that I could pretty much design my own system a la carte.” 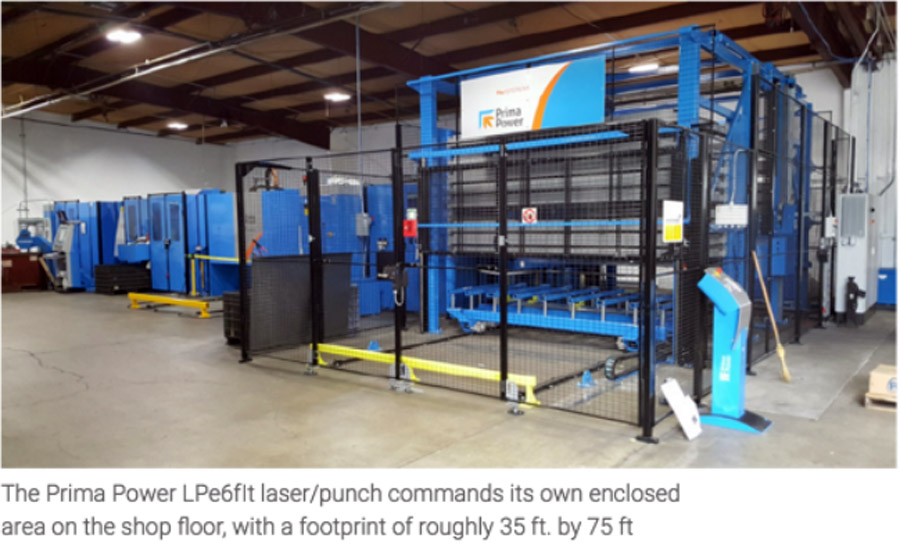 In addition to punching and laser cutting, the LP series can also mark and form. The system P&A ordered, an LPe6f, has a 24-tool turret with six auto-index stations and three fixed multi-tools. As few or as many stations as required can be equipped in this manner, giving the machine a potential of 384 tools. The punch also has a 25-ton up-forming ram, rather than a mechanical lift as with some systems, thus providing greater accuracy and power. Sheet sizes up to 121 in. by 61.2 in. (3,074 mm by 1,565 mm) can be processed.

“There are two options for parts handling,” Plass says. “The LSR robot loads and squares sheets of material, then stacks any finished parts larger than about 8 in. sq. and places them on a pallet. When the job is done, the pallet is transferred to the tower with the parts ready for bending, welding or whatever. The other option, the SU-9 sorting system, is for smaller parts that drop through a trapdoor and go to one of nine storage bins. The system also takes care of bringing raw material to the laser/punch machine and moves the skeletons to a pallet for disposal.”

The laser/punch system also has its own nitrogen generator (see sidebar) from Burns Machinery Inc. Aronson estimates that generating its own nitrogen saves P&A more than $120,000 annually, which will easily pay for the generator in less than two years.

“We knew early on that we wanted a fiber laser, but I was concerned about the high cost of liquid and bottled nitrogen,” he says. “The Burns system completely solved that. We can now cut 10-gauge and lighter steel twice as fast as with CO2, with no laser-oxide edge and very low operating costs. And the punching capability is a big improvement over our old machine. We’re very glad we went this way.” 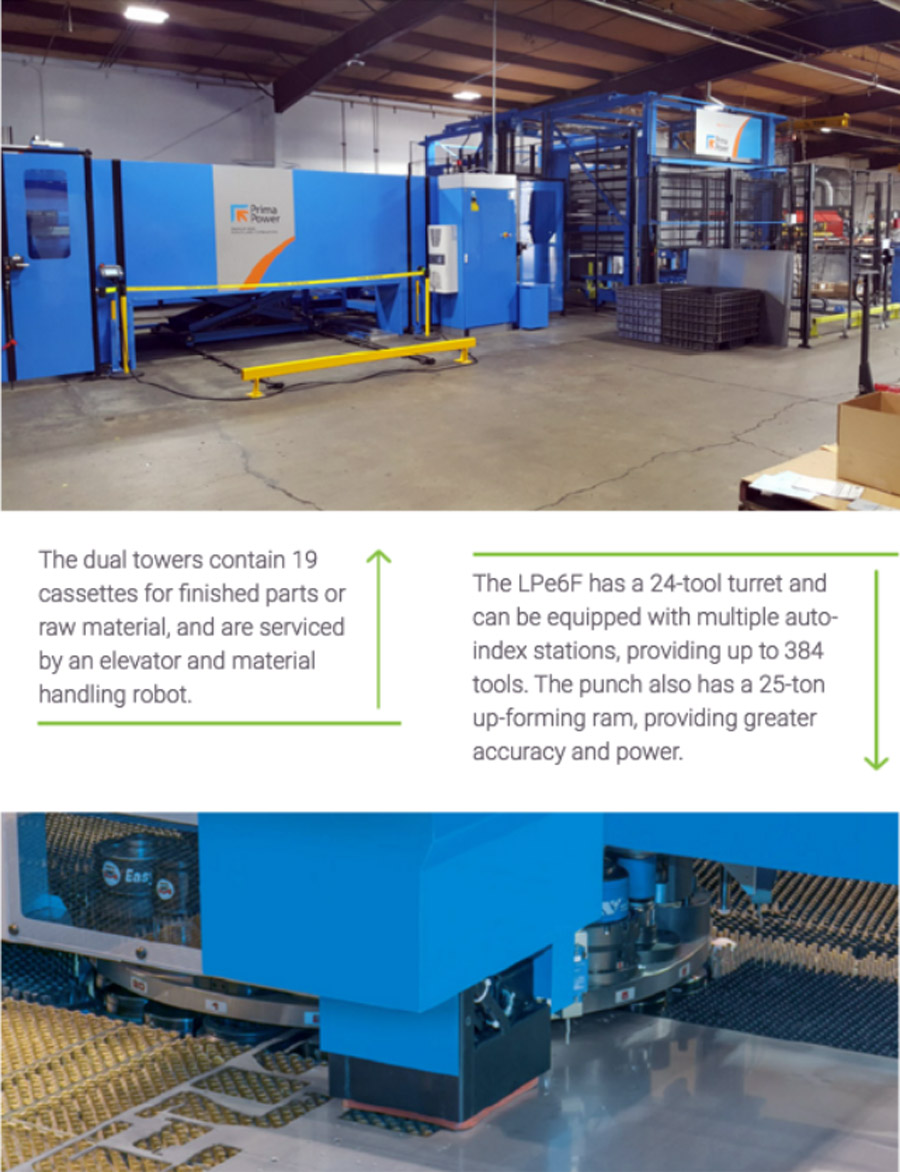 The LPe6f system was installed in July 2016. It commands its own enclosed area on the shop floor, with a footprint of roughly 35 ft. by 75 ft., and it took less than one month to implement and train staff.

It wasn’t all sunshine and roses, however. Aronson says the learning curve of the new equipment, never mind the switch to fiber, has been a little steep, and it’s taken him and the team some time to transfer jobs from their legacy machines.

“We have hundreds of part numbers and job quantities from one or two pieces to hundreds or even a few thousand,” he says. “We’ve made a lot of progress, but we’re still transferring parts from our old systems. We basically have to re-tool everything. We have all the geometry for the parts in our master DXF library, but we need to assign what we want to punch and what we want to laser cut, the processing order, and how to lead in and out of each part. And when doing automatic sorting like this, it matters where you start cutting the part and where you stop, otherwise it might get buried under the turret.”

Of the jobs that have been fine-tuned for the LPe6f, Aronson says he’s quite pleased.

“We have a number of nests that run really well – slot machine doors, for example,” he says. “We make sets of 400 parts at a time. We know what parts to drop through the trapdoor and what parts to put on the pallet. The job runs all night without a hitch.” 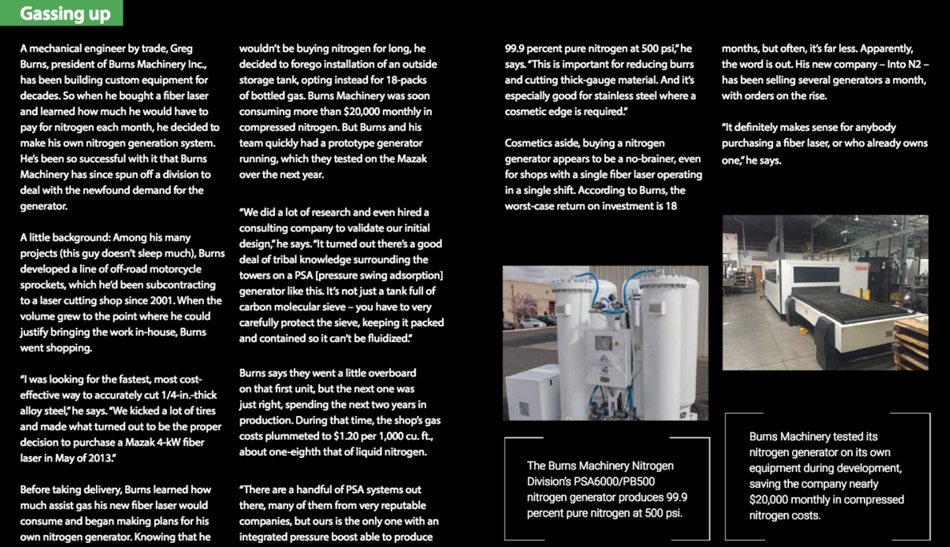 Despite these early successes, P&A is not yet at the point where an operator can assign 40 different parts from five different customers into a dynamic nest and have the laser/punch system run by itself. Not yet.

“The greater automation adds a level of complexity that makes it a bit tougher to run completely unmanned,” Aronson explains. “But we’re getting there. Anyone in this business had better understand the need to be as automated as possible. This means embracing and mastering the next generation of equipment. That’s exactly what we’re doing.”

When asked what his father thinks of the new laser/punch system, Aronson says he is extremely proud of what P&A Metal Fab has become.

“The P&A stands for his name, Phil Aronson,” he says of his father. “Just as I did since I was a teenager, my two sons also work here, and I’d like nothing more than to see them as part of a succession plan, something I am working on now. The company has been around for almost 40 years now and with continued investment and the support of our dedicated employees, it will hopefully be here for another 40 years.”