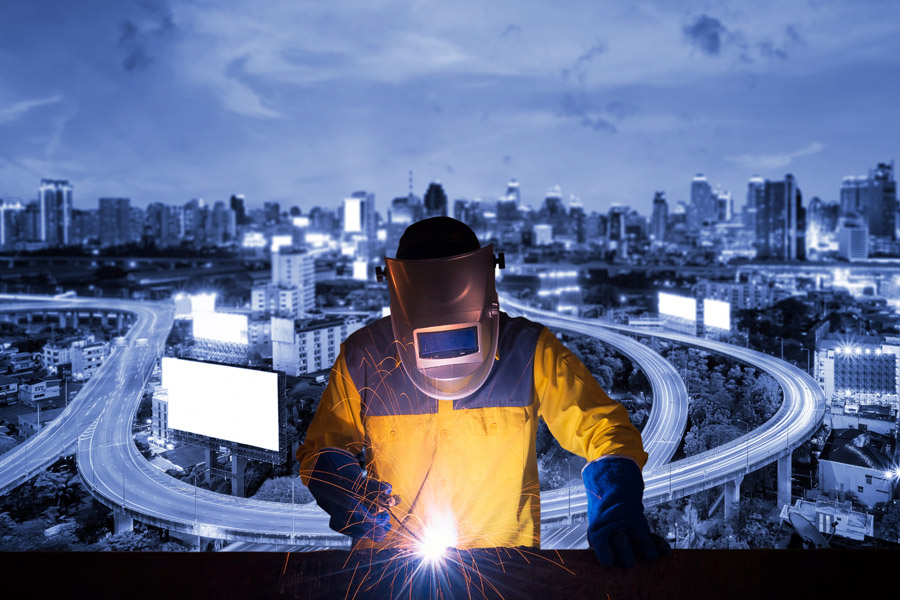 On July 17, 1981, two walkways collapsed at the Hyatt Regency hotel in Kansas City, killing 114 and injuring 216. After investigations concluded, it was found that changes were made to the original design that resulted in serious flaws in the structure, including the fact that bolts were placed directly through welded joints in the support beams holding up the walkways.

Additionally, investigators determined that the walkway collapse was the result of poor communication between the design firm and the steel company that manufactured the support beams. At the time, the incident was the deadliest structural collapse in American history.

The tragedy served as a grave reminder of the importance of sound engineering design as well as good communication between those designing a structure and those carrying out the work. However, it also served as the inspiration for many youth at the time to pursue a career in engineering in hopes of avoiding future catastrophes. Mike Ludwig, staff welding engineer at the American Welding Society (AWS), was one of those young individuals.

Today, after 38 years working in several capacities in structural welding, Ludwig serves as a conduit between those that oversee D1.1, one of the most widely used welding codes in North America, and those that perform the work defined within it. In that role, he fields various questions that deal with the general use and understanding of D1.1 and offers guidance in regard to its contents and how it is carried out.

The first version of the AWS D1.1: Structural Welding Code – Steel was published in 1928 as the Code for Fusion Welding and Gas Cutting in Building Construction. Its goal was and is to provide all necessary requirements for the safe and sound construction of public structures. According to the official D1.1 document, the code “covers the welding requirements for any type of welded structure made from the commonly used carbon and low-alloy constructional steels.”

A second code that deals with the process of welding steel structures is AWS D1.5, which addresses the construction of steel bridges. Both are American National Standards Institute (ANSI) documents and are included in most building codes around the country today.

“When a locality provides the approvals required to build a building, that locality dictates the use of D1.1 specs, including specifics such as material section and design criteria,” Ludwig explains. “It’s a comprehensive document that outlines all of the requirements to fabricate a structure: workmanship requirements, testing requirements, inspection requirements and qualification requirements.”

Every aspect of a building is included – down to the handrails on a set of stairs and the tubular steel signposts that might be placed outside of the structure. As long as it’s made of steel, D1.1 covers it.

The current version, indices included, is 603 pages long. Understandably, the inch-plus-thick document can be intimidating to fully digest. Regardless, any welding engineer overseeing the construction of a steel structure must be familiar with it.

“Any engineer that is responsible for D1.1 work could benefit from a formal course that covers its contents,” Ludwig says. “It’s a large and complicated book, so if they’re not familiar with it, it can be daunting at best.”

Depending on the size of the project, there could be dozens if not hundreds of welders working on a construction site. Good communication between welders and welding engineers, therefore, is of utmost importance. Without it, there is no other way to ensure that the welding taking place is proper and in compliance with the welding procedure specifications (WPSs) laid out for the project. Understandably, it’s helpful to identify an individual who will be responsible for those lines of communication.

That front-line person, intermediary or welding coordinator, whatever they may be referred to on-site, could be a welder supervisor, foreman or someone from middle management. Regardless of the moniker, they are responsible for relaying the project’s WPSs to the welders and making sure that they are clear regarding what the welding engineer expects of their work.

“I’ve been a chief welding engineer throughout my career, and typically, someone in that position doesn’t have the time to look over all of the welders’ shoulders,” Ludwig says. “Designating a middle man is incredibly important, and establishing trust with that person is critical. It all comes down to effective communication going in all directions.”

In other words, it takes a collaborative relationship between the welding engineer and the welders doing the job – facilitated by a responsible middle man – to construct a safe structure. Ultimately, public safety depends on it.

A primary purpose for D1.1 is to qualify the WPSs that will be carried out on a construction site and to qualify the welders that will lay down those welds. On any construction project, the welding engineer must be confident that the welders are qualified, in accordance with the code and following the WPSs that have been developed for the project.

“The contractor will qualify the WPSs and then make sure that the welders have been qualified on those welds,” Ludwig says. “The more the people involved understand D1.1 or even just their part of the code, say a welder, to understand what they can or cannot do, the better the end result.”

A welder can be qualified on the WPSs that have been established for a project on-site. More often than not, an experienced welder should be able to pass the in-person test even though they may have never picked up or even looked at D1.1. But that doesn’t mean there aren’t several factors that lead a welder to gain a better understanding of it.

Even though a welder does not need to be an AWS certified welder, there are several paths a welder can take to certify that they can achieve the highest quality required for structural welding. Undoubtedly, any welder that has earned an official D1.1 certification will have set themselves apart from the rest of the welders.

“If your job is to be a D1.1 welder, in my opinion, it would be a good thing to learn as much about it as possible,” Ludwig says. “And, if you have any aspirations of becoming a certified welding inspector (CWI), extensive knowledge of D1.1 is a must.”

In addition to its CWI credential, AWS provides a specialized D1.1 endorsement for those who hold a CWI certification and have passed the D1.1 test. Additionally, there is an online D1.1 code clinic that anyone can sign up for. The clinic is four hours of dedicated instruction and is available to watch online for up to 30 days after registration. All those who take the code clinic automatically get continuing education units toward their applicable licenses. Additionally, CWIs can earn professional development hours toward their AWS certification renewal requirements.

“The code clinic’s initial intent was to help individuals pass the CWI exam and provide CWIs a primer for their D1.1 endorsement, but it’s also tailored so that anyone can take the online clinic to have a better understanding of the code,” Ludwig says. “It offers a good overview and scope of the book, providing a high-level overview of D1.1 and the different parts that are in it. It’s ideal for welders that want to take their job to the next level.”

It’s also recommended for anyone conscientious about their work and the overall quality of the project. The more that on-site welders know about the code, the easier it is for them to understand the information that’s being communicated to them by the welding engineer or middle man. It also gives them a leg up on future versions that will be published.

Every five years, a new revision of D1.1 is published under the guidelines of ANSI and AWS; the next release is scheduled for 2020. The changes can be potentially wide in scope, dealing with anything from new materials or filler metals and new power supplies that have been introduced to new specifications that have been written or even clarifications that needed to be made in the previous edition.

Beyond the certifications and education offered by AWS in regard to D1.1, Ludwig recommends welding engineers consider being on or at least attending code committee meetings hosted by AWS.

“Most of the people currently on a code committee have a lot of experience and a wealth of information to share,” Ludwig says. “If an employer supports and encourages their younger welding engineers to get involved to further advance their understanding of how the code is written, it’s a good thing. There are task groups, subcommittees and main committees that a young engineer can participate in today and in the future as their careers advance.”

Ultimately, it all comes down to the importance of a shared understanding of D1.1 on construction jobsites. When welders and welding engineers share a common language, communications and collaborations flourish. And in the end, those successful relationships translate into the construction of safe structures and a safer public.