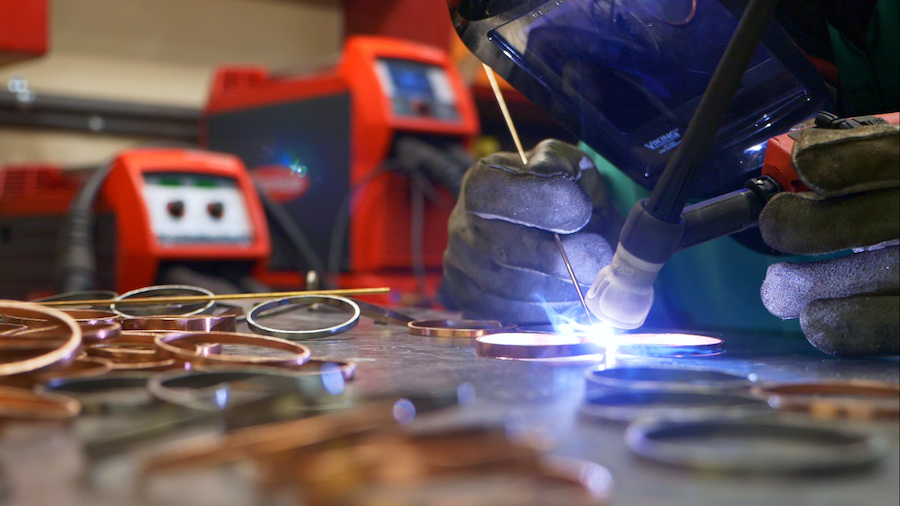 There’s always a feeling of excitement in opening a gift, unsure what’s inside, but hoping it will be amazing. This is the feeling Jason Hurst of WorksByaHurst captures in his Mystery Box series of videos. Excitement, vision and talent coupled with beautiful camera work and skilled editing. A rare combo, but not utterly unique in today’s world of online video and social media. But there are other talents Hurst offers that make his videos @WorksByaHurst special.

One standout is the playfulness and obvious love for his work that comes through in each video. Also, there’s the fact that Hurst does everything himself, from welding and crafting the artwork to the camera work, in his spare time. And he’s completely self-taught.

There’s no camera crew or post-production crew. No art degree or big equipment budget. In fact, many of the tools Hurst uses are homemade. He learned each skill – welding, brazing, videography, acting and editing, to name a few – through experimentation, books, online sources or some combination thereof. Hurst believes that investing in the right tools and education is better in the long run and credits his mom for instilling in him the idea that every challenge can be overcome if one works hard enough.

His dedication to hard work shows up throughout his life. In addition to creating a sculpture and video each week, he works full time as a freight conductor for the railroad and spends time with his wife and two children.

Eleven years ago, just six years into his career at the railroad, Hurst taught himself to weld. It had nothing to do with work or a career change; he simply wanted to convert a Volkswagen Golf into an autocross car. Lacking the budget to hire out the welding, he invested in some low-end welding equipment and learned what he needed to know to get the job done. That’s been his strategy ever since and it’s served him well.

After the car project, Hurst continued to experiment and discovered an artistic side of welding that he fell in love with. A fan of science fiction, he sculpted several spaceships and droids based on well-loved movies and shared them through video and other social media. The posts were popular and many of his early followers come from those fandoms.

Sharing his creations through social media was fun, but Hurst wanted to do more. Staying true to himself, he bought editing software and learned how to make the best videos he could. His viewers find them pretty amazing. His YouTube channel has more than 26,000 subscribers and some videos number more than a million views.

The sculptures Hurst created sold well but could take upwards of 400 hours to complete, leaving him little time to create anything else. Realizing that time was his most limiting factor, he moved from selling his sculptures to giving them away.

How is giving away artwork a better strategy? By shifting to creating content instead of a specific sculpture to sell, Hurst can focus on the fun and creativity of doing the work. “Instead of investing all of my time into a single art piece, I produce the experience,” he says. “I share the wonder and fun of creating.”

This concept shines in the Mystery Box series. The series idea came from a friend; ask viewers to send in a variety of metal pieces that Hurst could turn into a piece of art and send it back to them. His friend even provided the first box.

The idea had instant appeal. First, there is the surprise-in-a-box aspect, which many people love. Then there’s the creative side, figuring out what to make from the included metal pieces. Then, the execution, which includes all the various welding, joining and brazing that has to happen. Sometimes, Hurst has to learn a new technique to create his vision. Finally, there’s the reveal, that wow factor of a finished sculpture from a box of random metal items.

In fact, it became so popular that just six months into 2019, Hurst had to stop requesting boxes. He had enough boxes to finish the year with his one-box-a-week schedule. Both adults and children love the videos which makes Hurst happy. His goal is to inspire creativity, not just create things, and he’s careful to make each video family friendly.

Creativity is a part of being human. Welders, trouble shooters, fabricators, they all bring creativity to their work; some just don’t recognize it and that’s what Hurst wants to share. He doesn’t set limits on the boxes he receives. He doesn’t use every piece in the box, and sometimes he adds something if that’s what the sculpture needs.

“There are no rules in this,” Hurst says. “Finding a shape within a pile of shapes is what I’m good at. Sometimes, a shape or idea will grab me right away, like the shell of a turtle or the face of a droid. Other times, I have to take time to discover what I’m going to make.”

Creativity is about seeing things differently. Sometimes that means spreading all the metal pieces out on the table and walking by them many times throughout the day. Seeing them from different angles can spark all kinds of ideas, which Hurst occasionally shows in the videos by giving voice to his “inner child” persona. Both light-hearted and fun, the videos are for everyone, but welding and brazing equipment aren’t for kids. Parental supervision is required for all shop work.

It’s common in the online community to hear creators express a dream of a bigger space to work, or an external shop. Hurst is different. He calls his shop his “sacred space” and he likes to keep it focused. As part of that work-life balance, when it’s shop time, the cell phone is shut off, the door is closed and the focus is 100 percent on the job at hand.

“The power of focus is an undervalued thing,” Hurst says. “Too large a space can invite clutter, and clutter can be the enemy of creativity.”

Instead of growing bigger, he wants to refine and become more accessible. Refine the process, the space, and the tools and equipment he uses. One way Hurst has done this is to approach companies that produce tools that can make his life easier. The high-tech welding equipment that Fronius builds appealed to both Hurst’s artistic and realistic sides.

Angelica Almaguer, online media manager, Fronius USA LLC, says, “When we saw the quality and artistry of Jason’s content, we knew right away we wanted to have him partner with us.”

Fronius provided Hurst with a TranSteel 2200 for MIG welding and a MagicWave 230i for TIG welding.

“These machines are extremely well-mannered and quiet, which makes recording video and talking while welding possible,” he says. “They perform well no matter what I want to do with them. They’ve made my welding more consistent and easier regardless of what type of metal I’m working with. It’s a pleasure to have the machines in my sacred space.”

For some of the artwork, MIG welding is easier because Hurst can hold the piece in one hand and the torch in the other. For other work, TIG welding does the best job. He does a lot of fine detail MIG welding, sometimes welding two pieces of 0.030-in. welding wire together with 0.030-in. wire as he did when he made a bi-plane sculpture. “The synergistic adaptability of these machines is amazing.”

Looking to the future, some of Hurst’s plans include bringing creativity directly to people via a mobile welding studio. By keeping his production lean, and refining his process, he believes he can continue to produce quality videos from wherever he is located at the time. “The Fronius machines are small, and easily portable. They fit right in with that dream.”