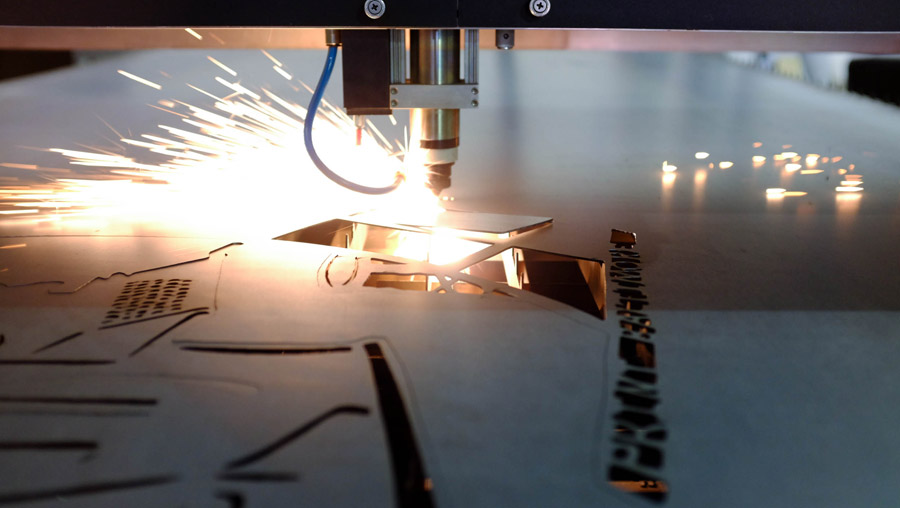 Jay Selway spent nearly two decades in an office job. The graphic designer worked his way up the ladder, eventually becoming a creative director. He admits he wasn’t entirely happy in that career, so he did something about it a couple of years ago that allowed him to shed the suit.

Selway and his wife, Melanie, are the co-founders of Jumbie Industries, a company that creates everything from key chains to 14-ft. stainless steel signs for nightclubs. Jumbie’s home page boldly exclaims that they offer “Craftsmanship with a cause. Lasers. Signs. Woodworking. Design. All so we can help kids with cancer.”

It all started when the young son of a family friend was diagnosed with an aggressive form of brain cancer. The Selways felt compelled to help. Melanie worked for years with an international non-profit, so she knew how to put together a fundraising campaign. Along with Jay’s experience as a creative director, they were able to draw great support for the fundraiser and advocacy campaign.

“It wound up selling for a lot of money,” Selway says. “I got the crazy idea, ‘hey, I should buy a laser.’”

It took some convincing, but Melanie agreed and they bought a 50-W Epilog CO2 laser and started making Christmas ornaments on evenings and weekends to raise money for their cancer advocacy work.

“The first month we had it, we made $3,500,” Selway says. “One thing led to another and after a while, I left my career in advertising and started Jumbie Industries.” 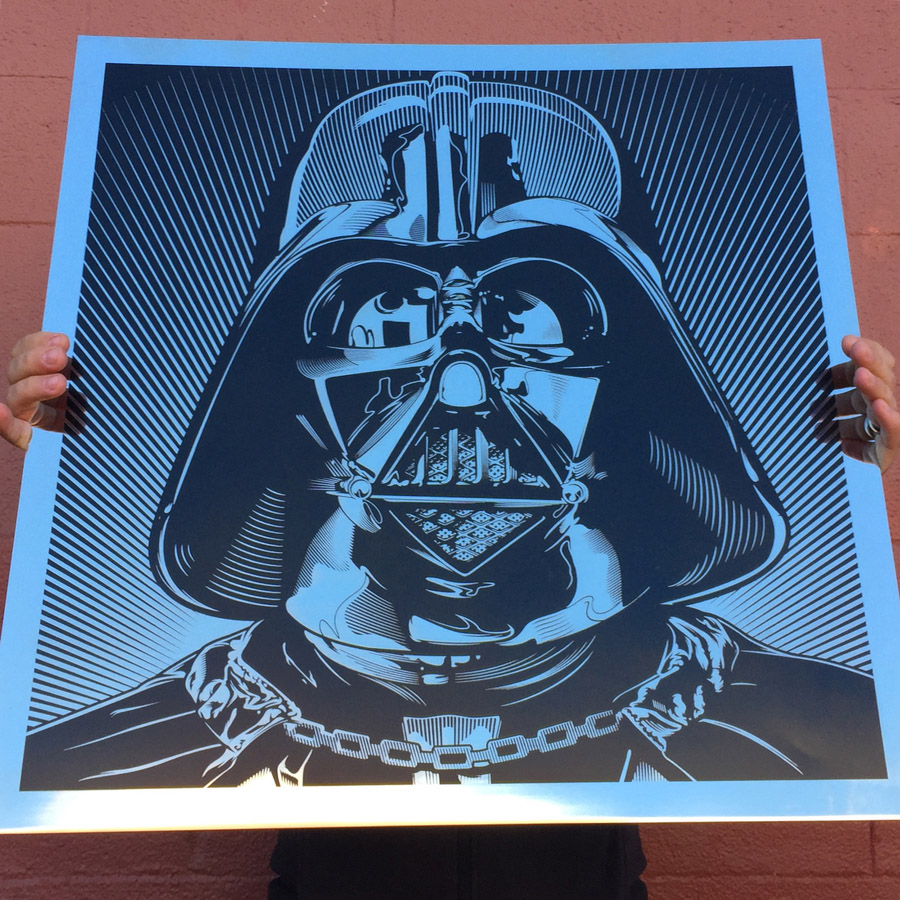 Selway says he picked up operating the laser fairly quickly. Once you understand what it can and cannot do, he says, the basic operation of it comes fast. The challenge is using it as an artistic tool.

“Just because you have a paintbrush doesn’t mean you can paint,” he says. “You need to practice and know the theory behind it. I was fortunate that I have a background in graphic design. I also had a lot of background in 3-D modeling and CAD, so using the laser came pretty naturally to me.”

It wasn’t long before the Selways realized they needed something more powerful, so they began investigating which laser OEMs might be a good fit for them.

Selway was familiar with a few Kern lasers because the fabrication jobs they outsourced, which required a higher-powered laser, went to companies that used them. In addition to bringing this work in-house, Selway wanted a machine with the versatility to cut and etch a variety of materials, including wood, acrylic, paper and metal. His familiarity with the Kern machines led him to believe the company would have exactly what he was looking for.

He talked to Kern’s sales staff, who walked him through some options. After consultation, Selway decided to buy the HSE 400-W laser due to the speed at which it could cut through a variety of materials. 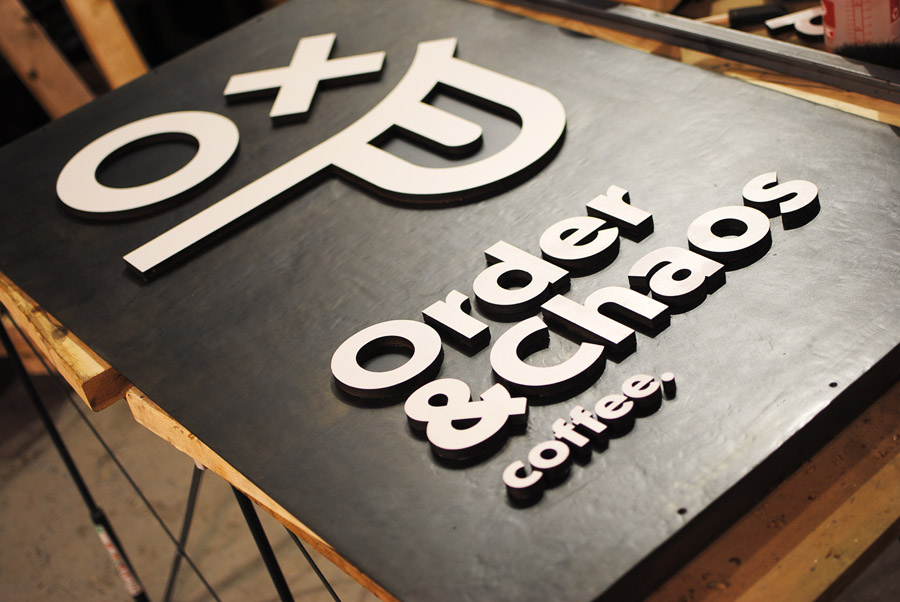 Signs for restaurants and nightclubs are made easily with the HSE 400-W laser.

The HSE line is a flagship model in Kern Laser Systems’ product lineup, which includes CO2 and fiber lasers for cutting, etching and engraving. The HSE, a CO2 machine, features a wrap-around gantry that traverses over the cutting bed, which allows for the easy removal of finished parts. High-speed servomotors and a flying optics beam offer excellent power and cut quality with speeds up to 150 in. per sec.

The HSE motion package is connected to servomotors on both axes for fast engraving. A downdraft table/vacuum system whisks away fumes and debris.

Every HSE model comes with Kern’s KCAM laser cutting and engraving software. An easy-to-use printer driver allows the operator to send vector and raster files to the laser. As software updates become available, Kern offers them through its website free of charge. Design software choices include CorelDraw, AutoCAD LT and Adobe Illustrator.

Each laser system in the HSE line includes a UL-certified electrical panel. The HSE is also CE-compliant to meet European Union consumer safety, health and environmental requirements. And, with systems of 100 W or more, Kern includes a closed-loop chilling unit to keep the laser head cool and operating efficiently. 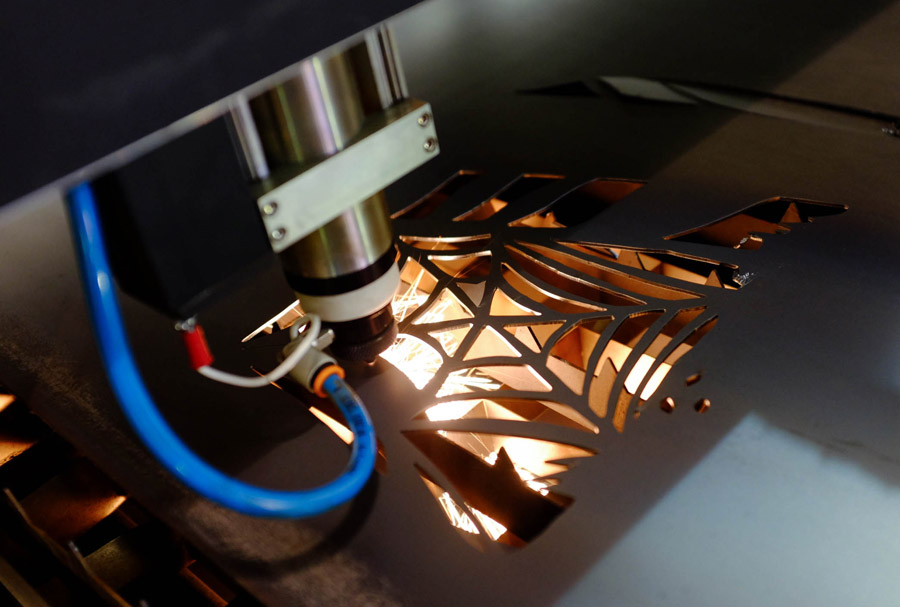 The HSE 400-W laser flies through a variety of materials, including steel, a popular material for Jumbie’s customer.

“Honestly,” says Selway when asked how bringing in the new laser impacted his company, “we’d probably be out of business without the Kern.”

Selway appreciates the versatility of CO2 lasers, as he cuts thin and thick materials, including recent jobs that required cutting a 1.25-in. acrylic, which it breezes through in one pass, leaving a polished edge. He also regularly cuts 11-gauge steel and 2-in. thick wood.

“The versatility of it is pretty awesome,” he says. “The speed of the laser is fantastic. It’s not the fastest laser on the market, but considering how big it is, it works well and speeds up our production.” 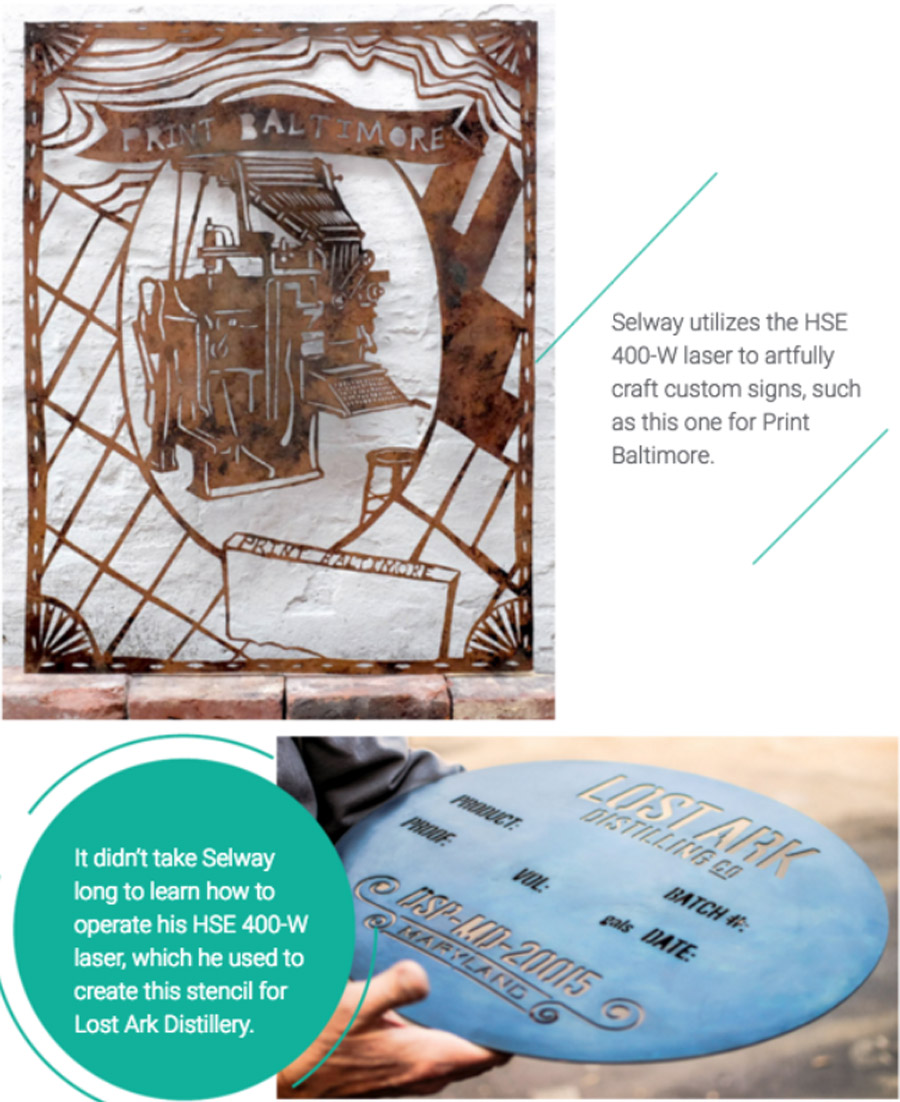 Much of the sign work Jumbie takes on includes working with 11-gauge steel. Selway’s currently working on a 14-ft.-long sign made of 16-gauge steel, which was processed through the HSE. The sign also includes other materials, including wood and acrylic, which plays into Selway’s reasoning behind choosing the HSE.

“We might be doing key chains one day and tap handles the next,” he says. “We’ve kind of become known in the area as the company to go to if you want to something strange built. When they want a leg up on their design and want something unique, they come to us.” 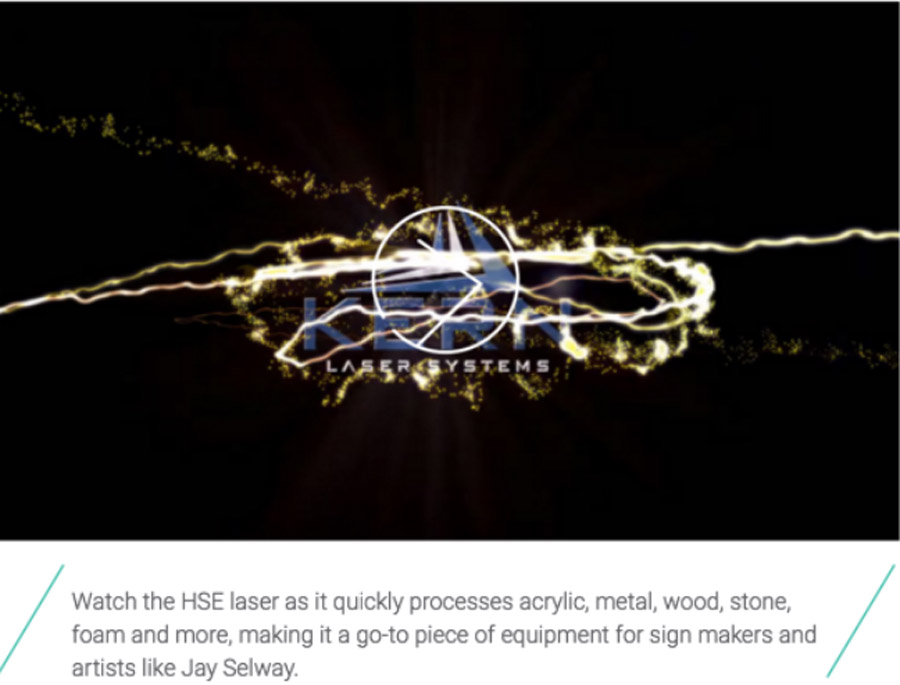 As an example, Selway recently said “yes” to a rush project for World Bank. The company hosted an event and wanted set pieces for the stage. The pieces were 6-ft.-tall currency symbols made of steel, which Selway laser cut and painted.

“Without a laser we wouldn’t have been able turn that project around in a day,” he says.

Selway rarely sends any material out to be fabricated by a third party anymore. Thick aluminum is one of the only exceptions. If he has any questions about what the HSE can handle, it’s easy to get through to Kern. To say the least, he’s extremely happy with the customer support he gets from the company. 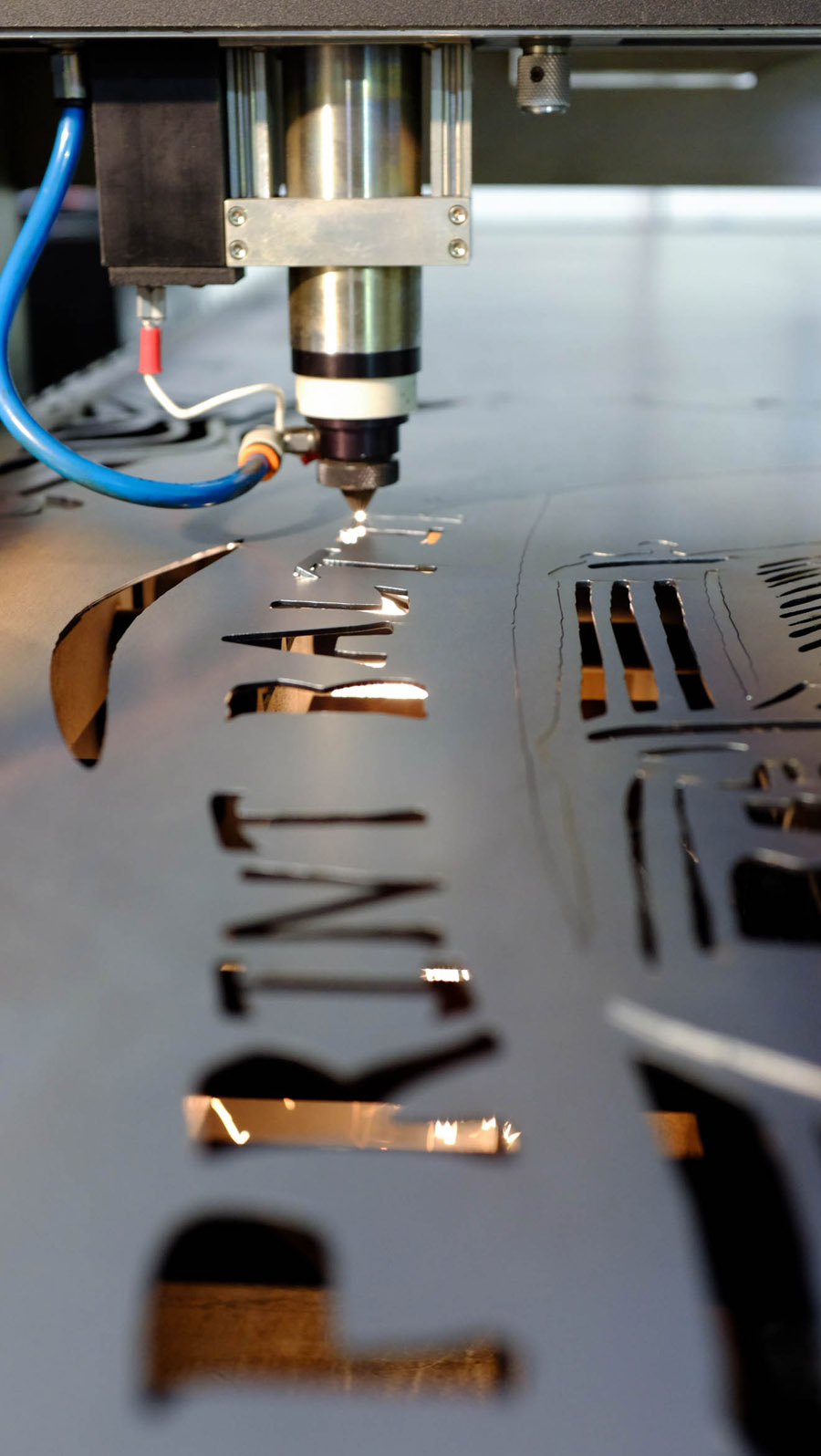 The HSE 400-W laser flies through a variety of materials, including steel, a popular material for Jumbie’s customer.

“If your machine is not running or you’re having issues with it,” Selway says, “you’re not making money. We had a mirror burn up yesterday because I forgot to clean it. I emailed our sales guy, he answered me an hour later and the parts are in the mail already. I can’t say enough good things about them.”

Jumbie has grown extremely fast and Selway says they’re already at capacity with their current equipment. He’s entertaining the idea of getting another Kern that matches the current HSE model. He’s also interested in bringing a medium-size model to the shop room floor.

As the company has grown, the Selways haven’t lost touch with their original mission to assist families fighting cancer. In fact, 10 percent of all their profits go toward pediatric cancer charities in their community.