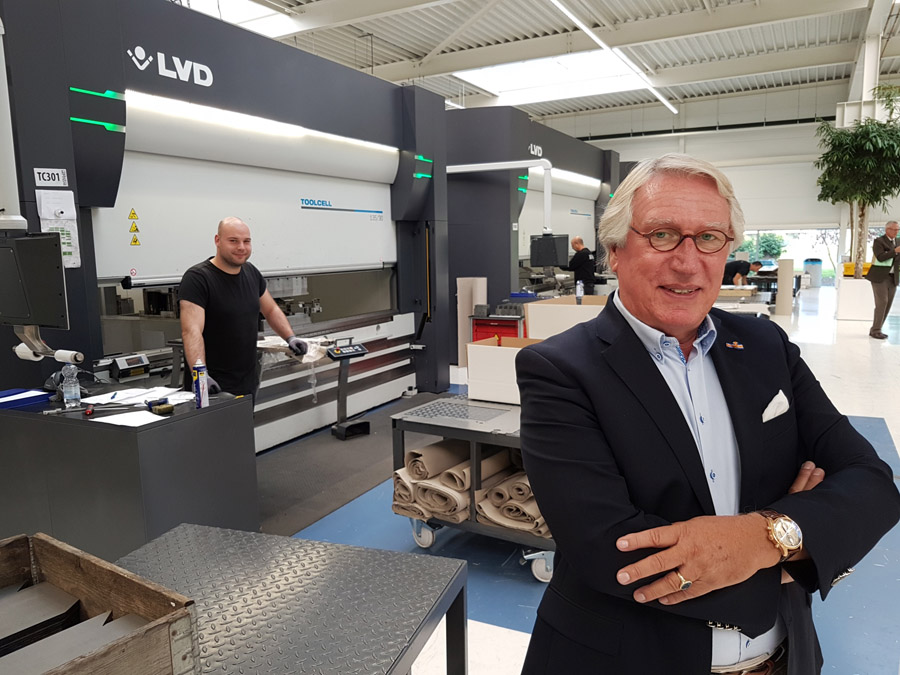 Throughout my career in the metals industry, I’ve heard rumors. Rumors alluding to the idea that European manufacturers are more amenable to automation and new technologies than we here in the States. I’d been told that new machines are often available to the European market years before they’re available here. That in itself said a lot to me about the type of manufacturing happening across the pond. But I needed to see it for myself.

So, when LVD extended an invitation to visit its headquarters in Belgium and tour some of its customers’ facilities last September, I jumped at the offer. After all I’d heard about European manufacturing and fabricating, this was my chance to see it firsthand.

After visiting a handful of LVD’s varied customers, however, I discovered that things aren’t all that different. European and U.S. manufacturers face many of the same challenges, namely, a lack of skilled workers, customer demand for quicker product turnaround and global competition. Unsurprisingly, their strategies for combatting those challenges are similar, as well. 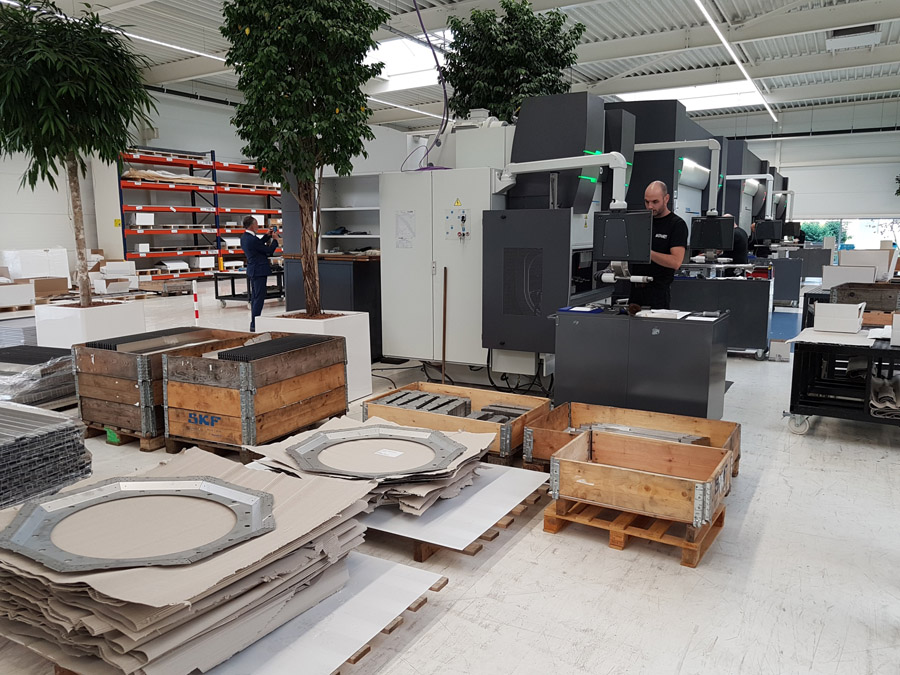 The flow on TailorSteel’s shop floor is smooth and organized thanks to efforts the company takes to embrace Industry 4.0 philosophies.

One thing of particular interest was to see a smart factory in action, and LVD’s customers didn’t disappoint. Specifically, a custom fabricator, 247 TailorSteel, stood out as the quintessential European company I’d been waiting to see. Located in the Netherlands just three hours north of LVD’s headquarters, one of the first things visitors notice when entering the building are the huge indoor potted trees living happily amongst cutting-edge equipment branded with the company’s logo.

Also grabbing visitors’ attention are the automatic guided vehicles, or AGVs, that circle the serene shop floor, delivering plate and tube to machine operators without any human assistance. The AGVs and their robotic material loading counterparts allow operators to focus on the value-added cutting and bending tasks that TailorSteel’s customers rely on.

To bend steel, stainless steel and aluminum sheet material, the company invested in seven LVD ToolCell bending machines that run around the clock. Keeping with the theme of automation, the ToolCells feature an automatic tool changing system that doesn’t require much from the operator beyond punching a few buttons. The library of top and bottom tooling, integrated into the back of the machine, is accessed through the machine’s control software, which greatly minimizes setup time. Further easing the operator’s job is LVD’s Easy-Form Laser in-process angle real-time monitoring technology, which ensures the first bend is an accurate bend every time.

Beyond the intelligence built into the press brakes, TailorSteel also benefits from LVD’s Cadman-B software, which automatically calculates bending solutions. The software stores the solutions in the Cadman database. All LVD press brakes installed in the TailorSteel factory are connected to this database and share this data.

Cadman-B is part of LVD’s Cadman software suite, which serves as a springboard to greater Industry 4.0 adoption, placing a focus on automation and data exchange. LVD’s Cadman customers – evenly spread out between the United States and Europe – rely on it as a first line of defense to their shared manufacturing hurdles.

The idea behind the suite is to give customers a one-stop management dashboard where connectivity and machine monitoring deliver deep insight into overall operations. Not only can design, production planning and automatic program generation be tracked, Cadman also offers the full picture of what’s happening on the shop floor.

Part tracking is so comprehensive that alerts can be created the moment a part leaves the laser cutter to head to the press brake. For the machine monitoring component, collected data informs preventative maintenance activities to keep machines running longer. Machine monitoring can also help Cadman users better understand why equipment is down or producing less than expected, be it operator error or otherwise.

With its sleek facility, cutting-edge equipment and attention to the principals behind Industry 4.0, TailorSteel epitomized the type of smart manufacturing that I expected to find in Europe. These efforts have not been lost on the company’s customers or its own country, for that matter.

In 2014, TailorSteel was nominated as a Smart Industry leader within The Netherland’s Smart Bending Factory project, designated by the country’s Ministry of Economic Affairs. The following year, the company earned the designation as the most extensively automated company in The Netherlands.

In addition to TailorSteel’s advanced equipment and automation hums another prime example of Industry 4.0, a powerful software system developed by the company’s founder, Carel van Sorgen. Named, Sophia, the software revolutionized the way that TailorSteel’s customers could order their parts. 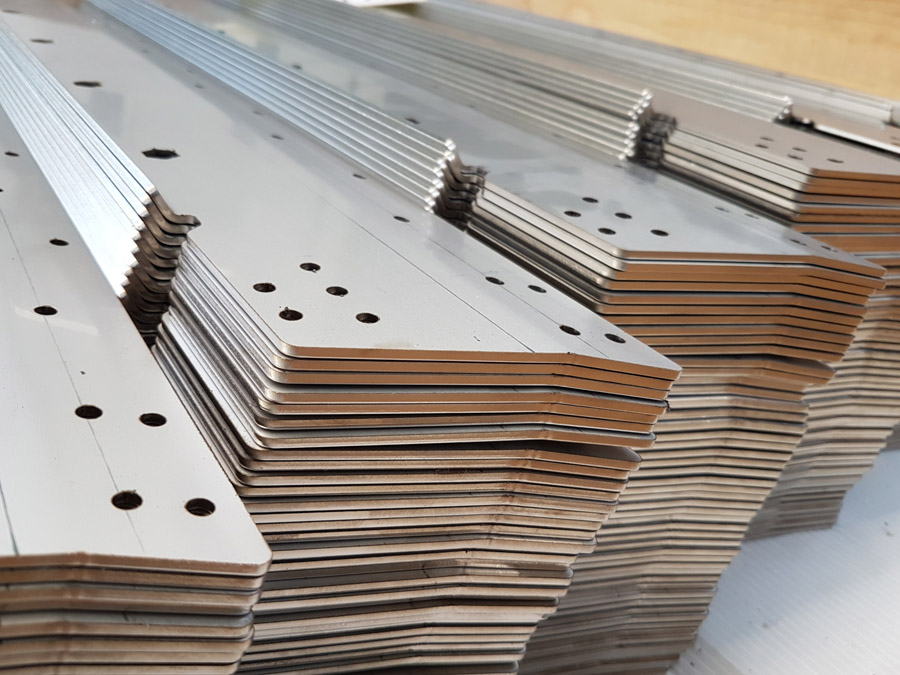 TailorSteel eases the process of submitting part orders through its revolutionary online portal where customers can upload their designs for fabrication. Quotes and final product deliveries come within minutes and days, respectively.

The automation, equipment and culture at TailorSteel tick a lot of the boxes when it comes to overcoming today’s manufacturing challenges. And although these assets also ease the burden of delivering customer orders quickly and efficiently, van Sorgen’s Sophia is a game changer.

Similar to modern ecommerce engines, Sophia was created to make online ordering easier. The robust program found on the TailorSteel website is a bit different, however, considering the depth of detail available when uploading a design for fabrication.

As described on TailorSteel’s website, “Sophia uses artificial intelligence to direct production and logistics. She can generate laser-cut metal sheet and tube material in no time. All this occurs without human support. You can use this online tool 24 hours per day, 7 days a week.”

To get a quote in minutes and a product in days or even hours, customers upload a STEP, DXF or DWG file, which Sophia then analyzes. In fact, Sophia is short for “sophisticated intelligent analyzer.” Sophia’s interface also allows customers to select material types or thicknesses, adjusting associated costs in real time.

For van Sorgen, developing cutting-edge software is part of his M.O. After taking over his father’s manufacturing company in the 1980s, van Sorgen wasn’t satisfied with the cutting programs available for lasers at the time. So he made his own, which he eventually sold to a major metals fabricating OEM.

“We bought the first laser cutter in Europe, a 500-W machine,” he explains. “It took 30 to 45 min. just to get it up to temperature before it could cook. But once it was up and running, there wasn’t an easy way to program the machine. By working with a reputable software house, I gained a lot of experience developing the program and along the way, solved a major problem for both us and the customer base. Giving the customer what they needed and when they needed it was the whole idea from the beginning.”

Several years later, after acquiring TailorSteel, van Sorgen set out to revolutionize custom fabricating yet again with his online ordering software. And similarly, customers were at the heart of the effort.

“I created Sophia to have a portal where customers could create their draft and, in a minute, get a quote,” he says. “Because Sophia can be linked into a customer’s ERP system, everything else is done for you. You specify a date and then you can go fishing.”

With orders freely flowing from a customer’s home base and then throughout the TailorSteel factory, van Sorgen is taking Industry 4.0 to the next level. But technology doesn’t solve all of today’s manufacturing challenges. Knowing that, TailorSteel places great emphasis – and appreciation – on its employees and their happiness on the job. 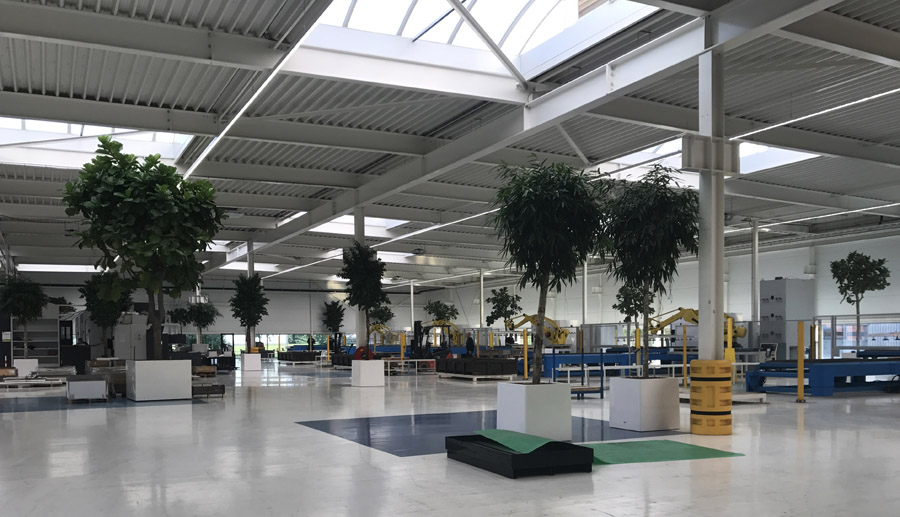 Ample sunlight keeps machine operators productive and happy. Likewise, it allows the company to keep indoor plants, which also improve the overall mood of those who work there.

The unemployment rates of The Netherlands and the United States are fairly similar, lingering in the 4 to 5 percent range. Belgium’s is a tad higher at 7.3 percent. While these rates are acceptable, the issue for manufacturing employers isn’t finding talent; it’s finding good talent. Overcoming the skills gap is yet another challenge that both European and U.S. manufacturers share.

In that regard, speaking with LVD’s Belgian and Dutch customers was no different than speaking with manufacturers in the United States. Across the board, employers are faced with a growing number of retirees and an aging workforce that doesn’t easily adapt to new technologies.

As is true in the United States, the European Commission is motivated to train its citizens for advanced manufacturing positions. Therefore, work-based learning and vocational education and training are gaining steam.

On average, 48 percent of E.U. students receive vocational education and training whereas 73 percent of students in the Czech Republic, for example, receive the same. So, when a western European company can’t find a skilled welder or an experienced press brake operator, it’s not uncommon to recruit employees from the Czech Republic or other eastern European countries. 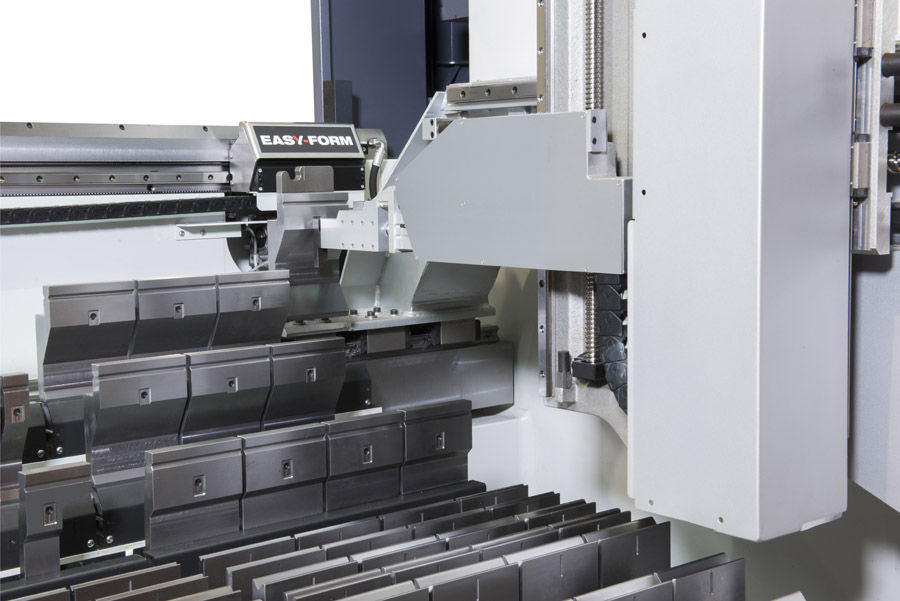 Unsurprisingly, when a company does land a quality employee, the goal is to retain them. And TailorSteel is no exception. The company pulls out all the stops to keep workers happy, healthy and secure. In addition to the foliage on the shop floor, employee restrooms resemble high-end gym locker rooms, and the company break room looks more like a chic cafe than the expected bland space most employers offer.

“There is definitely a healthy way of working,” van Sorgen says. “Although it’s uncommon in the metals industry, we have a very nice, comfy cafe because our people are very important to us. And that’s part of the reason we get new people. Last year, we hired 65.”

Another reason TailorSteel is able to hire and retain quality staff is due to the culture and employee bonus program van Sorgen has established. Every quarter, employees share in the company’s successes to the tune of about €450 ($560) on average.

With skilled workers in high demand, equipment like the LVD ToolCell helps to keep morale high, considering its ease of use. Material handling equipment reduces the amount of heavy lifting and, therefore, the amount of workplace injuries.

Because of its employee-centric efforts and forward-thinking strategies, TailorSteel grew its profits by 45 percent in 2016. The company has also opened additional locations and is setting its sights on expanding into new markets, such as the United States. 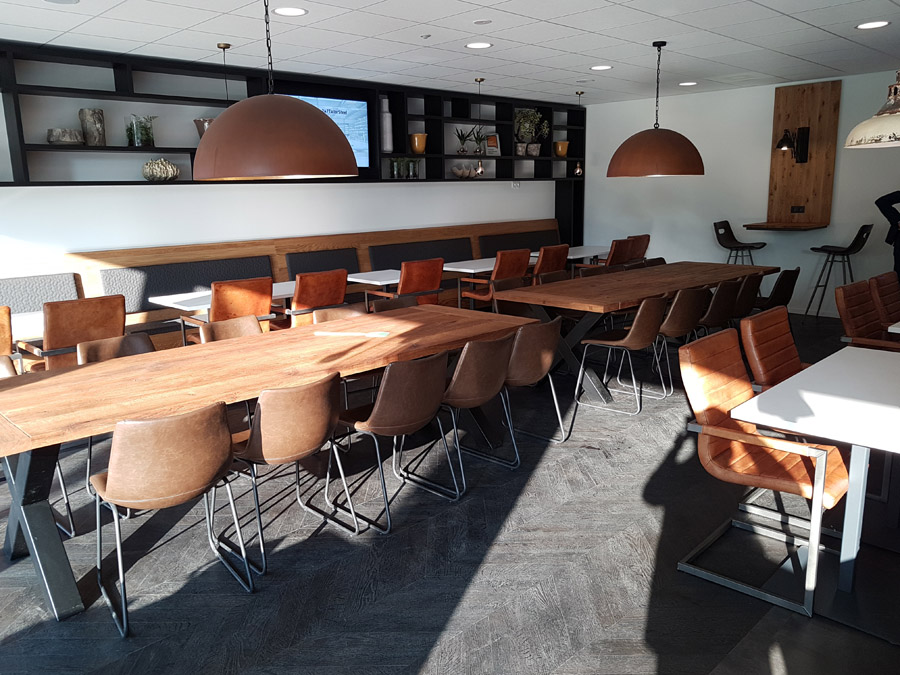 “By 2020, we want to double our turnover,” van Sorgen says. “And it’s only the beginning. We’re happy with those goals, but on the other hand, it’s a big challenge to grow while also maintaining your quality because at this point, only the best will do. You can promise a lot, but you have to make it true.”

So although TailorSteel is overcoming many of the challenges that manufacturers face – regardless of their location on the map – the company is creating a new set of challenges with its unprecedented growth. All rumors aside, I can only imagine that TailorSteel’s new problem is one that European and U.S. manufacturers would all be happy to share.