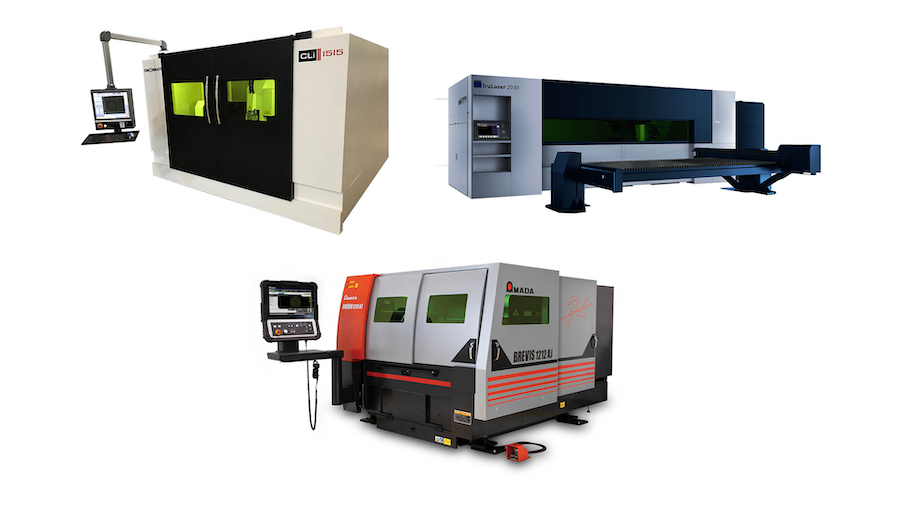 Year after year, Fabtech is the proven venue for finding new technology and equipment, and Chicago 2021 was no different. While laser OEMs had a lot to offer, an interesting standout was

the number of new compact fiber lasers that are now available.

To better understand this trend, the team at Shop Floor Lasers reached out to three manufacturers to learn about the customers for which these laser cutting machines were developed and the benefits these users can expect.

AMADA’s compact fiber laser, the Brevis, was developed for a variety of target markets, including large OEMs that have prototyping and R&D departments, job shops that make a living off of prototyping, tech schools that are expanding and medical device manufacturers. In terms of large OEMs, the main issue they face is when the prototype and R&D departments collide with the production department, which needs to be running parts 24/7 on its laser. Dustin Diehl, laser division product manager, AMADA America, explains.

“When a prototype needs to be produced or a part requires revisions, they have to stop the laser and interrupt production for this one part,” he says. “And in some cases, that isn’t even the end of it. It’s not uncommon in prototyping and R&D to have to revise something again and again. These OEMs would like to have a compact machine that is dedicated to that department, so that there’s no need to interrupt the work of the big, automated cells.”

Job shops that also do R&D and prototype work can experience the same headaches as the big OEMs, but typically they’re using a plasma or waterjet table when they should be using something that is more precise. While they might not be ready for a full-blown large machine, a compact machine like the Brevis checks off quite a few boxes.

“They can do one-off, custom or low-volume work for their customers on the Brevis and still run sheets all day long for those bigger contracts,” Diehl says. “So, it can be a production

In terms of the need for affordable lasers in educational settings, Diehl says “a lot of trade schools have recognized that they need to satisfy the end user for which they’re training workers.” To do so, “they need to take their students back to the point of blanking and get people trained on lasers,” adding that “in this scenario, they don’t need a full-size machine and nine times out of 10, they don’t have room for it anyway.”

Another educational perk is that the Brevis features the same control that comes standard on AMADA’s most sophisticated lasers. “It’s a common platform for us, which is great for cross-training,” Diehl says. “Think about someone coming out of tech school with that control experience. They’re going to be able to jump on a production machine in no time flat – and that includes our press brakes and punching machines.”

“If you were to run a 5-ft.-by-10-ft. sheet of your smaller part, you might be producing a lifetime supply in one go,” he says. “But, if you could break it down and run a 4-ft.-by-4-ft. sheet alongside any other small parts that need to be cut, it would make a lot more sense. These wouldn’t necessarily be full production environments, but would be more for making small, precision parts a couple times a week. The Brevis fills a niche for high-precision, limited-production environments, which lends itself nicely to the medical field.”

Technically, the cutting area of the Brevis is 4 ft. by 4 ft., but Diehl says that it’s large enough to hold a 4-ft.-by-8-ft. sheet. “If you cut out your parts on 4-ft.-by-4-ft. nests, you can slide the second half of the sheet down and process it again. That’s what our customers would do in a production environment.”

As a bonus, this method removes the added cost of pre-ordering blanks sheared down to a 4 ft. by 4 ft. (4-ft.-by-8-ft. sheets are a standard product for steel suppliers). “In terms of differentiators, this is an advantage for our small footprint machine versus other compact machines on the market,” Diehl says. Another differentiator is the Brevis’ tall Z-axis stroke.

“Think about a small electrical enclosure that just needs a couple holes cut into it,” he says. “The Brevis can handle that pre-made box. I don’t want to call it a 3-D machine, but you can take a formed part and add geometry to it. This is great for businesses handling custom work for electrical component manufacturers.”

In terms of bells and whistles, AMADA purposely kept a few off of the machine to keep the price point where it needed to be. The company did, however, include the iCAS camera system that allows users to take an existing scrap piece or remnant, place it on the cutting table and take a picture of it in real time to cut parts out of the voids.

“If you need one part cut, you can just grab a remnant, throw it on the table, take your picture and drop in the part,” Diehl explains. “You don’t have to run back to the programming office and wait 15 min. while they create the nest; you can do it in a matter of seconds as an operator.”

As mentioned, some smaller customers are most likely still using plasma or waterjet or outsourcing their laser cutting. Still others may be using older CO2 equipment.

“Times have changed since the advent of fiber lasers and as everyone now knows, the cost of operation on a CO2 machine is three or four times that of a fiber machine,” Diehl says. “Shuffling an old CO2 off to this type of work might require a fabricator to put $50,000 into it to refurbish it and bring it up to speed. Customers today understand that and instead of putting $50,000 into a machine that’s worth $20,000, they’ll use those funds to put a down payment on new technology and reap the benefits.

“A new machine is going to have immediate access to new technology that offers cutting data and monitoring capabilities,” he concludes. “Those old CO2 machines could be running great and paid for a hundred times over, but what’s the real worth if there’s no ability for machine monitoring and analytics?”

Cincinnati Inc.’s laser product manager, Troy Wilson, agrees there is a clear need in the industry for smaller laser cutters and further explains the void that these new compact fiber lasers are filling.

“Several factors weighed into the development of these newer, smaller lasers,” Wilson says. “As we all know, supply chains are a major issue. Many OEMs and even some job shops that have outsourced laser work are now seeing long lead times, and this begs the question: Do we bring this work in house?”

Wilson admits that while this isn’t necessarily a new realization, usually the justification for a laser investment is based more on volume than lead times. He adds that many smaller companies don’t typically have the volume of work to justify a laser, which is why they outsource it in the first place. The story changes, however, when lead times become an issue and there is actually a cost-competitive fiber laser available, like Cincinnati’s CLi compact machine. Wilson says the i stands for intro.

“Many of the OEMs that outsource laser work have smaller parts that don’t require large sheets to nest on,” he says. “With the smaller footprint laser like our CLi, a company can install a laser with minimal floorspace and be in control of their own destiny with the parts they need.

“At Fabtech, I talked to some smaller job shops that have never owned a laser due to price,” he continues. “These shops might have a high-def plasma at best and when they need laser cut parts, they outsource, just like OEMs. The CLi, however, is a viable purchase option for them because the price can be half or even less than a traditional 5-ft.-by-10-ft. dual-pallet laser.”

While the CLi doesn’t have a large pallet – it measures 1.5 m by 1.5 m – and doesn’t have a slew of bells and whistles, it can produce the same quality cuts as a traditional laser and can do so quickly and easily and at an affordable price. Wilson adds a caveat, saying that the CLi’s smaller pallet limits the size of parts it can process.

“To get the small footprint, you have to make the pallet smaller,” he explains, “which won’t be an issue for many companies if the geometry of their parts is small.”

With full transparency, he adds that the CLi is a single-pallet versus a dual-pallet system, meaning an operator’s productivity is limited. With a single pallet, the laser can’t cut while the operator is loading and unloading materials. For many companies, however, this scenario is still much better than waiting on long lead times.

For manufacturers that are short on floor space, but still require larger sheet processing capabilities, TRUMPF offers its TruLaser 2030, which is compact for a laser cutting machine that can cut 5-ft.-by-10-ft. sheet material. Its footprint isn’t as small as the other new machines, but it is smaller than a standard flat-bed laser. James Gamache, TruLaser sales engineer, explains.

“The TruLaser 2030 offers a wide spectrum of processing capabilities on par with the larger laser cutting machines offered by TRUMPF,” he says. “This machine comes standard with a 4-

kW TruDisk resonator and nozzle changer, which lends a hand in processing mild steel up to 1 in., aluminum to 0.75 in. and stainless steel to 0.75 in.

“The biggest differences when comparing this machine to larger scale machines are a more compact layout and a pallet that feeds in from the side of the machine rather than the back,” he adds. “In addition, the machine can be installed on a wider array of surfaces because the requirements for a foundation are minimal. This makes it easier to fit the machine onto a shop floor that is tight on space.”

Gamache says the TruLaser 2030 is typically best suited for small manufacturers in industries ranging from aerospace to agriculture that are looking to do short runs of parts with high variability. These shops typically don’t have the space available for a 5-ft.-by-10-ft. machine with a traditional layout but still require a machine that is easy to operate.

“Ease of operation aids the operator in quickly producing a high variety of parts,” Gamache says. “DXF files can be processed entirely on the controller of this machine, which gives operators great flexibility on the shop floor. The machine is even equipped with a state-of-the-art HMI, which includes a built-in CAD system for part development. The simple design of the HMI makes it quick to navigate and learn, even for someone new to laser machining.”

Thanks to these features, the TruLaser 2030 can truly transform a shop, often replacing manual operations, such as hand cutting with a torch.

“It offers manufacturers the ability to create precision parts at the touch of a button,” he says.

Overall, this is the goal for the TruLaser 2030 and each of the compact fiber lasers presented in this roundup – to give businesses the benefits of modern fiber laser equipment that they otherwise assumed were out of reach.