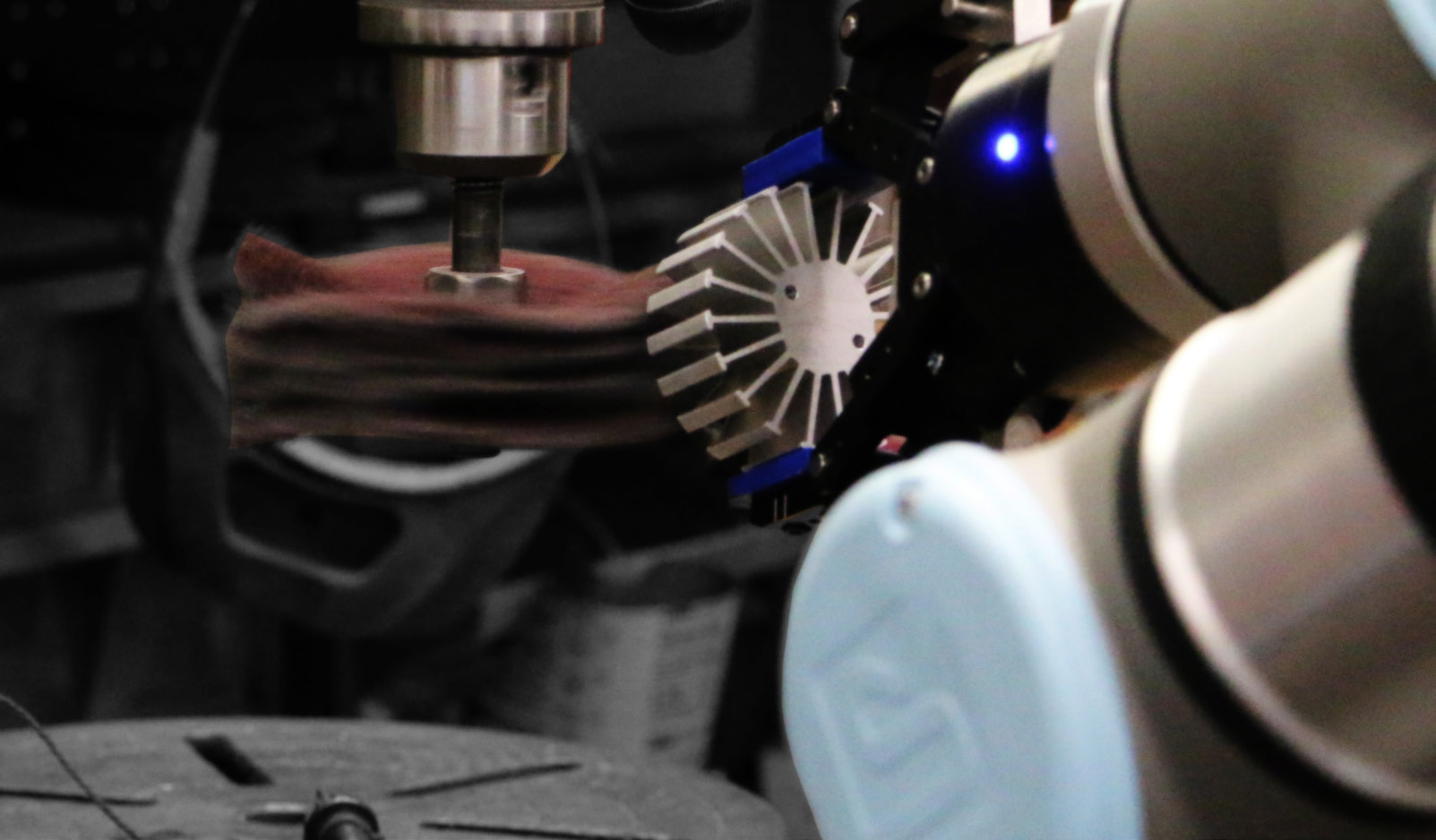 All Axis Machining was struggling to automate the operation of some of its older machinery. However, when the company discovered the open integration architecture through the Universal Robots’ UR+ platform, it was quickly able to automate six operations with collaborative robots, or cobots. The deployment was so successful that All Axis started offering UR cobot integration services to other machine shops.

“Last year, we couldn’t even spell robot,” says Dave Perkowski, general manager at All Axis. Perkowski makes that statement as he walks the shop floor where numerous collaborative robots are now hard at work performing CNC machine tending, sanding, deburring, part inspection, laser marking and wire EDMing. “We had no actual robotic integration and automation. Being able to immediately start interfacing cobots with our machines has been unbelievable.”

All Axis began to look for automation solutions as it faced a lack of available manual labor. The lack of skilled workers was causing unwanted machine downtime – an unwelcome issue for any business owner.

“It drove me crazy when all the guys were out to lunch and none of the machines were running,” says Gary Kuzmin, owner of All Axis. “After 5 p.m., we’d have a skeleton shift with only half the machines running. It was costing me orders that I couldn’t get to my customers on time.”

A major obstacle in automating operations was that All Axis’ machines were legacy equipment with no direct interface for traditional industrial robots. “Also, an industrial robot requires a fence around it, but we weren’t ready to give up floor space – or more importantly, be locked into using the robot for only one task,” Kuzmin explains.

“From a technology perspective, it’s heaven to have all of these capabilities and integrate them into our current systems without any other assistance.”
Dave Perkowski, general manager, All Axis Machining

After exhausting their options with conventional robots, the team at All Axis discovered collaborative robots, which looked to be a viable solution.

“We got a demo from Universal Robots and quickly realized that cobots offered easy integration through the controllers of our old machines,” Kuzmin says.

Communication between the UR cobots and All Axis’ machines is made possible through the UR+ platform and a free software development kit that allows users to develop their own plug-ins, also referred to as URCaps, that integrate control of the entire application right through the cobot’s own teach pendant.

“Universal Robots has done a fantastic job of making this solution available to shops like ours,” Perkowski says. “The operating system is open, so we’re not locked into a proprietary environment. We’re basically given this cookbook with an easy way to expand communication.”

He goes on to explain that All Axis uses protocols, such as TCP/IP, Ethernet, Modbus and ProfiNet, connecting the cobots and machines.

“From a technology perspective, it’s heaven to have all of these capabilities and integrate them into our current systems without any other assistance,” Perkowski says.

He also appreciates that there are no hidden costs. “Another advantage is that we don’t have to pay special licensing agreements; it all comes with the purchase of the UR cobot. We simply sign up on the UR website to become a developer, and we download the elements we need.”

The UR+ platform also addresses the trial and error that’s sometimes associated with equipping a robot arm, such as end effectors, force sensors, vision cameras, tol changers and other accessories. The platform features a showroom with more than 100 products certified to work seamlessly with Universal Robots.

Similar to any machine shop owner, Kuzmin always worries about the bottom line, which made the cobot integration all the more a welcome relief. When All Axis purchased its first UR10 cobot, the company had a job slated to take four to five months of run-time on one machine without hiring additional staff.

“We took the cobot, put it on the CNC machine and delivered that part almost two and a half months early because of all the additional machine time the cobot provided,” Kuzmin recounts. ”We saw a 60 percent profit increase on that job alone. ROI was about a four-month return. Our spindle uptime has gone from about eight hours a day to about 20 effective hours.”

On top of a quick ROI and faster turnaround times, All Axis soon discovered that the 50-micron accuracy accuracy of the UR10 was crucial in terms of precise insertion in laser marking and CNC machine tending as well as in sanding and deburring.

“Our sanding used to be all manual, and lines from tool marks couldn’t always be avoided,” Kuzmin says. “With the UR10, the parts come out perfectly straight; in fact, one customer called up and said they were impressed and wanted to know what we’d done differently.”

When All Axis first researched the UR cobots, management was curious to find out how different the programming and operation would be, specifically for operators with no prior experience. As it turned out, it wasn’t as difficult as they’d initially expected. That was in part because the company was able to send its employees through the UR Academy, consisting of free, interactive online modules that teach basic programming and setup.

“We had an elderly operator doing the sanding, which requires a lot of muscle,” Kuzmin recalls. “One day, I was watching the operator on a monitor and saw him pick up the cobot’s teach pendant to start programming it to sand the part.

“I’ve never been more proud to see one of our employees learn a brand-new technology,” Kuzmin continues. “It’s really empowering and it’s going to improve his whole lifestyle and earning capability, as well.”

One of the most interesting aspects to the All Axis story is that the company is not a high-volume shop. Typically, the team runs about 20 different parts per day, which requires quick changeovers – both in terms of changing tools at the end of the robot arm and moving the cobot between machines to be tended.

“We needed to achieve changeovers in about 5 to 10 min. at most,” Perkowski explains. “The UR+ program allowed us to find products for the cobot that all had quick disconnects. The platform even gave us the tools to create some ourselves.”

All Axis has also developed mobile platforms that allow operators to wheel cobots between jobs.

Half a year into the cobot automation project, the management team also realized their newfound expertise could easily be extended to other machine shops facing the same hurdles. And that’s when All Axis Robotics was born. This offshoot is dedicated to the integration of turnkey UR cobot solutions in the metal fabrication industry.

”We come into a company and evaluate their needs, and on any of their equipment – no matter how old it might be – we can probably implement a cobot into their operations.”

“An industrial robot requires a fence around it, but we weren’t ready to give up floor space — or more importantly, be locked into using the robot for one task only.”
Gary Kuzmin, owner, All Axis Machining

Part of All Axis Robotics’ business is developing new products for its customers. These offerings include a line of turnkey, automated deburring/sanding systems for high-mix/low- volume machine and sheet metal shops. The primary features are a fully programmable 6-axis UR cobot, a sanding table with integrated clamping rails, and a loading and unloading station. The robotic end effector also features a quick-change tool, enabling interface with a variety of standard pneumatic metal finishing tools. A graphical user interface application has been developed to significantly reduce the complexity of robot programing to a matter of hours. This GUI means that no extensive training is required to develop a complete sanding or deburring path. Most customers are up and running in 15 to 30 min.

The automated burr and foreign object debris (FOD) detection inspection system is a turnkey system that uses a combination of optics, multi-axis and rotational movement, and software to automatically identify, detect, locate/map and guide operators to repair or remove burrs or FOD on parts.

The system’s software uses machine learning and pattern recognition to identify regularities and irregularities in data, always comparing to the CAD model and operator overrides. More specifically, the system can be “taught” to recognize different types of debris or burrs and add it to the learning database for future recognition and filtering. The system includes a 6-axis UR robot, advanced controller systems and basic robotic pedestal.

As for the integration aspect, Kuzmin recognizes the major question that people might have in regard to the creation of All Axis Robotics: Why would they be willing to help out
the competition?

“What we compete for is labor,” he says. “There’s plenty of business out there for all of us to have, and integrating cobots into legacy machines is what will really drive manufacturing in the United States.”