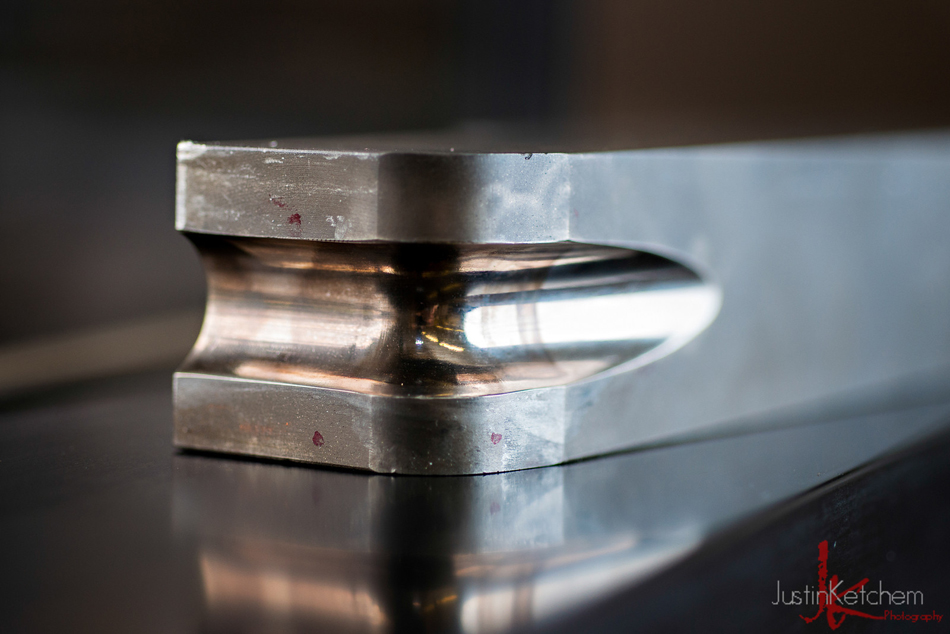 To avoid spalling and tears in the links, chain-forming tools are highly polished. As tools wear, they’re re-polished until they lose their form. Coatings eliminate the polishing and extend tool life.

It’s hard not to envy the huge advances in the life of cutting tools, wishing that the tool coatings that have enabled their extraordinary improvements in cutting speed and tool life could apply to bending and forming tools. But those coatings don’t stand up well to the forces employed in fabricating, particularly the forces that try to shear the coating off of the tool.
There’s evidence that a solution is one the way – or maybe it’s already here, ready to go, and just waiting for widening application in bending and forming tools. A chain-manufacturing company has been using it with great success in an application that involves high forces and very high volumes, and the coating has produced a massive improvement in tool life and product quality.
With nearly a century under its belt, Peerless Chain Company doesn’t stand pat. The Winona, Minnesota-based company still makes chains for lifting and other uses, as it has since day one, but they continue to refine processes and equipment.
An example is the evolution of Peerless Chain’s U-dies, used in special three-stage forming machines that produce the company’s signature product. Their testing indicates that an advanced coating from Phygen Coatings Inc. has greatly extended life of the U-dies and has enabled longer production runs without the need for die polishing and tool-repair downtime.

There’s more to chain-forming dies than one might think. This multi-part tool forms a link from a ‘slug’ of drawn or rolled wire, and includes such subtleties as the backside overbend, which compensates for an outward force that occurs when the link is forced closed and welded.

U-die tooling takes a beating, raises productivity, quality and cost issues
Peerless uses wire-groove U-dies to bend 0.625-in.-dia., cleaned and pickled alloy steel rod for chain products used primarily in the marine industry, and a special AISI-graded rod for alloy chains, the only type of chain the company recommends for overhead lifting. Peerless draws its own wire up to 9/16 in. dia, which produces smooth wire surface. But diameters that are too large for the company’s drawing operations have a fairly coarse surface, says Randy Schacht, production supervisor and training coordinator at Peerless.
“Under normal forming conditions, the rougher material wears the contact surfaces of our tooling rather quickly,” Schacht says.
A number of years ago, the tooling department at Peerless designed a roller-style U-die – like the original wire-groove die, it’s made from S7 tool steel – in the hope of delaying and minimizing die wear. But the problems persisted.
“As the plain U-dies or rollers in the U-dies wear, the chain link is affected by material push and scoring on the side of the links in contact with the dies,” explains Rick Schumacher, Peerless tooling engineer. “This has led to product rejection and scrap.”
“The roller-style U-die is meant to have less friction on the link by turning as the wire is formed,” he continues. “But both designs present an issue of a higher coefficient of friction because of metal-on-metal contact.”
Operators were pulling the U-die tooling out of the machines as many as three times per shift, for 20 minutes at a time, to polish them, according to Schumacher, equating to one hour of downtime per shift. That adds up, considering that Peerless runs the tooling across three shifts, as many as six to seven days per week. The maintenance also affected quality, as each polishing would change die dimension slightly, thus changing dimensions of the links produced and forcing time-consuming machine adjustments to compensate for wear. And as they would wear, they would reach a point at which they would have to be replaced.
“To reduce this friction and the need for polishing, we considered material change, the use of bearings and the application of tool coatings,” Schumacher says.

These round links are part of a ‘debarking’ chain used for logging. The tears evident on their surface create weak spots. When a tool wears, it produces these tears, and then it’s time to re-polish or discard the tool.

High-Adhesion Coating Tapped to Tackle Tool Issues
In September 2013, Peerless approached Minneapolis-based Phygen to determine if the U-die application could benefit from tool coating. The company’s relationship with Phygen has stretched back a decade, with Phygen supplying a coating first for a form die, followed by coatings for other Peerless tooling.
For this application, Phygen and Peerless opted for a trial with the U-dies undergoing Phygen’s FortiPhy tool-coating process, a patented physical vapor deposition (PVD) technology.
FortiPhy creates a thin and dense nanocrystalline coating structure that adheres to virtually any tool-steel substrate, according to Dave Bell, Phygen president. The process, which creates highly energetic plasma species, results in a nanocrystalline coating growth with a higher level of adhesion—three times higher—than is possible with conventional coating processes, he says. Other processes may use a method of adhesion that, unlike Phygen’s, pulls carbon from the tools to help the coating stick. But doing so depletes the tools’ carbon grains, thus hampering tool life.
“Adhesion of a coating on a tool substrate is the number one factor in coating success for difficult-to-form applications,” says Bell. “No matter the hardness of the coating, it has to stick, and that is where the adhesion process becomes so important.”
Temperature also varies among the various tool-coating processes. Both chemical-vapor-deposition (CVD) coatings and thermal-diffusion (TD) coatings usually are applied at temperatures greater than 1800 deg. F. FortiPhy requires significantly lower temperatures, claims Bell, lessening the chance of distortion that can play havoc with tolerances, while minimizing tool-hardness concerns.

Making chain involves tricky and complex tooling. One link is being wrapped around another, with arms to press the ‘slug’ into shape. It’s expensive, custom tooling and it can wear quickly without the Phygen coating.

Tests Show Increased Tool Life and Improved Product
Peerless elected to coat three sets of U-die tooling, two of the roller-style and one standard tool. The coating process, from the time each set was shipped to Phygen and then returned, took only about a week. Results are impressive.
Overall, according to Schumacher, the coating process lowers the coefficient of friction to as low as 0.1, provides a hard surface and produces a surface that is smooth to Ra 8 microinches or better.
Specifically, Schumacher notes these positives observed thus far in the testing process:
• Significantly fewer tooling marks/scrapes on the links, resulting in a better product. This is due to the coating hardness and composition, which means less material adhesion to the tool.
• No downtime for tool polishing. Since installation, the tools have not had to be polished – a timespan of months and more than 2 million machine cycles for one test set as compared to about 6,000 cycles beforehand.
Even as the coating wears over time, Peerless can have the tools recoated as opposed to the expensive and time-consuming prior practice of constructing a new tool. Also, with testing indicating similar results with the standard and the roller-style dies, Peerless may be able to use the standard dies more often, reducing tooling costs because it requires much less machining time to make the non-roller dies, besides eliminating the rollers and associated retainers.
“We run the U-dies across three shifts,” says Schumacher, “and producing just-in-time, we need those tools to perform. With an effective coating such as what’s been demonstrated thus far with Phygen’s FortiPhy process, we don’t have to stop runs to polish the tools and we produce quality product without markings, meaning less scrap.”
Evidence that the adhesion problem is solved is shown in the way the coating wears. It doesn’t flake or chip off; it just wears. When it’s worn enough, Phygen will strip off the remaining coating and re-coat the tool.
“Overall, we have pretty much quadrupled the life of our tools with the Phygen coating,” says Schacht. Some of Peerless’s lifetime relationships are much greater than that. More time in production, and improved quality via the new U-die coating, gives Peerless a competitive edge.