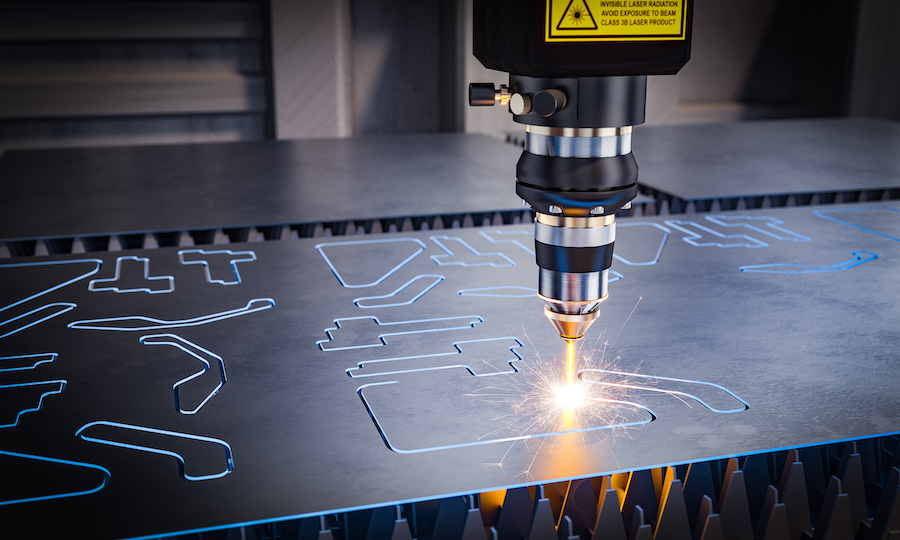 The advent of fiber lasers reshaped the world of sheet metal fabrication. It allowed for a faster, more economical processing of a wider range of metals than had previously been possible

While many fab shops and manufacturers have made the move to fiber, there are many others that still rely on CO2 or are just now making the shift. For those that are new to fiber lasers or are considering an investment in fiber lasers, it’s important to understand that the maintenance of critical optics components is simple and straightforward.

To put the ease of fiber optics maintenance into further perspective, one just needs to think about the complexities of optics maintenance with a CO2 machine. Yoram Mor, the director of sales operations at Ophir Optronics Solutions Ltd., an MKS Instruments company, says back in the day when manufacturers and fabricators employed a CO2 machine, laser optics were steadily streaming into their operations due to the high frequency of replacement. Back then and still today, CO2 machines contain a relatively high amount of optical components, including lenses and mirrors in the cavity and beamline of machine.

“The beamline of a CO2 machine has several mirrors that need to be carefully adjusted,” Mor says. “Something as simple as dust contamination caused them to be replaced regularly. While some maintenance and replacement could be handled in-house, in some cases involving the laser cavity or laser source, a service company had to be called to fix the mirrors or replace them.

“Conversely, the maintenance of fiber lasers is easier because there aren’t any optics in the beamline – it’s just a flexible cable with fiber inside that connects with the laser source and the cutting head,” he adds. “People have come to understand that fiber means less optics maintenance.”

The sole task of optics maintenance required for a fiber laser resides in the cutting head where there are a maximum of two lenses and two protective windows.

“The cutting head of a fiber machine is a sophisticated component comprised of two lenses or even lens doublets – one for collimating the divergent laser beam coming out from the fiber and one for focusing – plus two protective windows – one window between the fiber and the first lens, and one window between the second lens and the workpiece,” Mor explains. “Because the lenses are protected by the two windows, their lifetime is quite long. They’re well protected from the outside environment and, depending on the application, typically only need to be replaced annually.”

Even though the protective windows aren’t technically an optical component, replacing them are part of the maintenance routine needed to protect the optical lenses in the cutting head from dust, dirt and backspatter from the workpiece. The frequency depends on the environment and how much cutting the end user is doing.

When an optical component is exposed to dust and dirt, the natural reaction is to absorb the heat. When the heat rises, thermal lensing occurs, which changes the shape of the lens and removes the focus on the cutting area.

“The laser beam needs to focus precisely onto the cutting material,” Mor says, “and not only where you want it to cut, but also into the depths of the material. When there is a focus shift, you start to get an uneven cut.”

Therefore, the indicator that it’s time to replace the window is usually the same: the cut isn’t as good as it used to be. Beyond that, modern machines often have embedded technology to alert the user that the window needs to be replaced.

Mor describes the process of replacing a window as easy as pulling out a drawer. “You pull it out, remove the window and slide in a new one.” With Ophir’s windows sold in a vacuum-sealed package to maintain cleanliness, the only thing the user needs to do for a clean replacement process is to open the package close to the machine.

While the relative price of a window is relatively low, around $50, Ophir encourages customers to get the highest quality windows available because they will last longer and protect the optics better. Replacement windows could be equated to a screen cover for a smartphone. Phone owners can replace the cover themselves, but not the screen, and the windows are available in a wide price range to choose from.

“A company manager simply adds this item to his expense reports while the operator doesn’t bat an eye when it’s time to replace another window,” Mor says. “Replacing a protection window is easy, but you never, ever open the head and replace the optics. This is something that has to be done in a clean room by an authorized party.”

“Even if you think your environment is clean, if you open up a cutting head, the lens will instantly become dirty,” Mor warns. “You might not see the dirt, but under a microscope, the lens will look like it was dropped into a garbage bin. Even the smallest amount of dust or dirt can affect the cutting quality of a 1-micron laser wavelength.

“That’s why head manufacturers sell their cutting heads with the optics inside – end users simply don’t have the proper environment to open the head and replace the lenses themselves,” he adds. “If they were to do that anywhere but in a clean room environment, cutting performance would be dramatically low and even worse, they could destroy the lifetime of the elements inside.”

According to Mor’s experience, the optic lenses inside a cutting head need to be replaced about once a year, but as with the windows, the frequency depends on various factors, such as how many shifts the laser is being run and the amount of power being leveraged. The frequency in which users are replacing the windows and the quality of the windows used also plays a role. Regardless, it’s imperative that the laser OEM or head manufacturer be involved when a cutting head lens needs to be replaced.

The optical lenses in the fiber cutting head are made of fused silica, a raw material that has a low absorption rate tailored specifically for fiber laser wavelengths and low thermolinear expansions. Ophir’s lenses also feature special coatings to absorb as little heat as possible, a fraction of a percent, Mor says.

“There are a lot of considerations that we have to factor in when designing an optical component, including the size of the component, the type of raw material, as well as the type of coatings and its layers,” Mor explains. “The coating could be applied from one to 20 layers in various thicknesses, depending on the application. By altering or changing this, we can achieve better results depending on the requirement of the customer.”

When an OEM or cutting head manufacturer works with Ophir to develop new lenses, the process can be quite collaborative. Specifications, such as power level and optical size, are presented to the team at Ophir in order to produce the best solution possible. From there, the OEM will perform various field tests on a variety of materials. The results of these field tests will provide insight to the efficacy of the optic and will also be used to produce cutting data to provide to customers about cutting speeds, power levels and feed rates.

“When an OEM is selling a machine, they want their users to be well-informed about its operation and maintenance and will tell you exactly what you need to know to maintain it, the factors you need to pay attention to identify a change in the optics, and what you can or cannot do about it,” Mor says. “The OEMs can offer a wealth of information.

“In the end, the difference between a CO2 laser and fiber laser is almost like the difference between a regular car and an electric car,” Mor concludes. “With a regular car, you can do some maintenance and repair yourself, but with an electric car, while there’s much less maintenance required, if any repairs are needed, you’ll have to get an authorized service company to do the work. It’s just a different philosophy.”